Andrea del Verrocchio’s, Head of a Woman (1470s) advertises the Italian Renaissance Drawing exhibition at the British Museum. Waves of hair frame her oval face; her eyes are cast down in pensive gaze. Is it her attitude, a grace held in repose, that we appreciate today, or a sense of familiarity in her beauty? Similar ancient beauties influenced the looks of the earliest movie stars (Mary Pickford and the like), while Jude Law in Contrapposto1 would have caused chalk to fly through many a Renaissance studio, and although beauty is in the eye of the beholder, these faces and attitudes have gone towards shaping our aesthetic understanding in the world. A thread runs from ancient to contemporary that continues a type of timeless beauty in the world.

The Great Court at the British Museum, two acres of glass covered space that echoes Buckminster Fullers’ geodesic dome, houses the reading room. Sydney Smirke designed this round building, inspired by the Pantheon. Opened in 1857 it contains three miles of bookcases, 25 miles of shelves and the roof is made of papier-mâché. In this faux Roman structure Hugo Chapman (Assistant keeper Italian Drawings), brings together 100 drawings from the collections of the Gabinetto of the Uffizi in Florence and the British Museum in London.

This Italian Renaissance exhibition “displays drawings never intended to be shown outside the studio”2, the majority are working studies, revealing the stumblings and successes of apprentices and their masters.

If there is a problem with this exhibition it is not in the works on show, but in the complacency of a comfortable middle Europe for whom the Renaissance has become some sort of cultural accessory. There is a very rich variety of drawing here in tests and proposals and dreams, and they are missing the treasures in the detail, the struggles and the half glimpsed stories. Look carefully and these can be seen in jottings or smudges beside the primary marks on the field.  A calculation on the edge of Filippo Lippi’s drawing of Drusiana, reads + 1 + 5, - 61 +2. Is this a shopping list, the cost of materials or the totting up of incomes due?  And was it written before or after the figure of a woman drawn in the centre of the page? If after, it could be seen as a judgement of the drawing; if before it might be an indication of a sudden need to capture a models pose, or illustrate an idea to a colleague.

Walking through the exhibition one overheard, “these are just sketches, they didn’t take long”. This commonly held misconception, that duration of execution equals value, is ignorant of the components in a successful drawing. The length of time spent making the work is not important; it is the quality of observation, perception and imagination that instill value into marks on a surface. Observation, perception and imagination grow from courage and experience and take a considerable amount of time to apply. A lifetime actually, as any draftsperson will concur.

Time in the 1400’s when the combustion engine, the information highway and the telephone did not exist must have been a very different experience. Renaissance studios were stables in which draftsmen of varying abilities were “given time” to develop their skills and “took time” to study. Studying “classical sculpture encouraged greater naturalism in the depiction of the human body”3 and while artists also worked from model books, copying copies from other people’s copies, as paper became more available so exploration in line, tone perspective and motion developed. John Berger in his book Berger on Drawing said “A line, an area of tone is not really important because it records what you have seen, but because of what it will lead you on to see”4. And the joy of this exhibition is seeing in these works alongside the studies of masters, various stages of the learning process; we are watching these apprentice draftsmen at their discovery, exploring and finding out how.

Giovanni Antonio Boltraffio (recorded as Leonardo’s student in Milan) drew drapery of superb quality. In silverpoint highlighted with white lead the fabric folds so convincingly that the form appears to hover out of the page, but when it comes to drawing arms and faces Boltraffio’s effort is quite hopeless, he does not appear to know anything about a body’s structure and manages only a few limp lines. This startling contrast between Boltraffio’s brilliance for one form and his gaucheness for another, while reminding us that students drew “almost invariably from male models or classical sculptures for reasons of decorum”5, also shows us the workings of the Renaissance studio. Each draftsman had his task; drapes, hands or feet, the less important figures, background landscapes and so on. And as part of a team each person knew their position in the order of the work at hand, mastering one thing before going on to study the next. Like climbing different gradients, some apprentices were better equipped to attempt the summit, while others stuck to the lower foothills.

As well as the struggles of students we also see their masters working things out, and none more fluently than Leonardo himself. Studies of the Infant Christ and a Cat, is a scatter of lines. Wriggling marks catch a child not so gently holding a cat, while another tangle marks the said animal’s effort to struggle from an uncomfortable grasp. In a few deft strokes the essence of a cat, its physiology, innate behaviour, and physical response to handling, are realised through this exquisite pursuit. There is an important message in those deceptively muddled lines. If you can summon the courage to attempt a fair copy, embrace failure at every turn and resist holding any fixed notion of a goal in sight, you might follow someway in the footsteps of this master.

This is an important show, for those who love seeing drawings and learning to draw, and perhaps a haptic journey is just what is needed to reset a balance in our virtually preferenced lives. 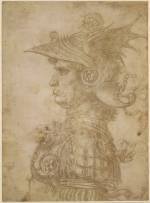 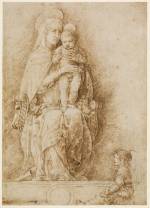 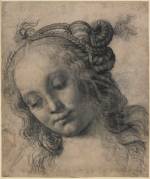 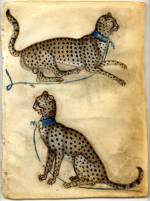 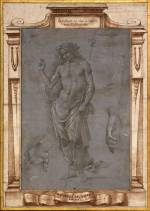 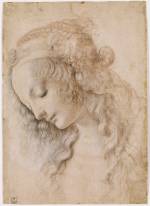 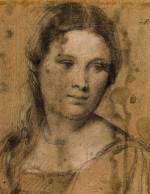