This exhibition and catalogue of the work of German artist Neo Rauch (now at the Max Ernst Museum, Bruhl, but last autumn at the Metropolitan Museum of Art, New York) raises many questions, to which there are few answers. The ambience of the work is an apparent 'Gothicism', on the surface at least, but there is much more at play. No participant in Rauch's paintings ever seems to open a mouth, yet feelings of acute disquiet are fully communicated to the viewer, in a realm where there is no actual gravitational equilibrium: even the scale of the players is manipulated within a single canvas. The artist seems largely to have removed such conventions.

The exhibition was chosen by the Metropolitan Museum to develop their contemporary range of events, previously focused over a period of three years in a wing dedicated to 20th and 21st century art. Thus, works by Joel Shapiro, Andy Goldsworthy, Sol le Witt, Cai Guo-Qiang and Frank Stella have preceded Neo Rauch, fulfilling a long-term plan to cut a niche of 21st century art. Each choice was calculated to surprise and inform the New York public. This takes some doing. Rauch has done it.

Rauch's work was not exactly traumatising to sated New York art lovers, but it was both mystifying and perplexing. Maybe now in Bruhl, within a German environment and culture, this will be less the case. Rauch admits that his art springs from dream sequences, but these are not readily clarified by resort to Freudian methods of analysis. Indeed, it could be that his work is more specifically related to Jungian thought. Certainly a painting such as 'Warten auf die Barbaren' animates a seeming group activity utterly devoid of sexuality yet wholly, demonstrably, even arcanely, pullulating. 'Die Flamme', by comparison, presents a single figure tied by one leg to a diagonal 'X'-framed structure. The landscape within which the flag-bearing man stands is obliviously green, like some territory of the Green Knight. 'Vorort' depicts an unexploded bomb, with five figures taunting it like matadors, while a yellow vapour trail above signifies some continuity of suspense. The painting 'Paranoia' is set within a windowless room, within enclosing perspectives; an ample female leans across a table towards a male figure with his back to her, while in the background stands a seemingly detached, sulking man. They all angle towards a small side table set up with two lit candles, like an altar placed below a curtain screen; to the left is an open doorway. In 'Jagdzimmer', hunters stand or sit, light a cigarette, and prepare game birds for hanging. A female sits sulkily at a table, presumably the one at which she has to pluck the birds, with evident distaste. 'Meisterschuler', a smaller work, has the player of a small organ, watched, presumably by his pupil, while the music appears to form visual notes or bars above. The massive 'Warten auf die Barbaren' (5 feet high and 13 feet long) is highly gestural. Apparent atrocities seem about to be committed. A figure in the middle ground is ready to be burnt at a stake. Females in apparent revolt, but calmly so, congregate and express a supine denial of festivity while the objects of a 'fest' are all present. Their expressions are ambiguous, perplexed or confused.

Neo Rauch finds, himself, that drawing plays a cautionary role. He was reared in the extremely conservative school system of Eastern Europe. In this more contemporary work, he seems to be pulled back there. The preoccupation of memory for him seems to be to recall the cultural imperatives of the East German Deutsche Demokratische Republik State in its heyday of the l950s and l960s, blending all that with forecasting an as yet unproven future, all of it somehow given relevance by filmic references. That perhaps is where Rauch seems over-contrived. Tarkovsky has been roped in for comparison in the catalogue text, but surely is wholly irrelevant even if Rauch is reflecting a haunted culture. For this, a kind of exorcism process is provided in the actual product of the drawings. Rauch, as in his paintings, allows dreams to metamorphose into nightmares, but the works ironically seem to reflect real experiences, drawn from some occluded memory bank. This hallucinatory effect is amplified by manipulating the scale of figures, as well as by detaching them from each other when ostensibly they form a group. When is a group not a group? In Neo Rauch's world of diversion and detachment.

Regarding his own works on paper, Rauch said in a 2001 interview with Laura Hoptman, 'a piece of art is instinct under control', adding, 'I have come to know before I start what I will do'. Critic Bernhart Schwenk has commented that 'there are an abundance of references to painting in these quasi-industrial scenes, where much labour is expended for no discernible result', and extrapolates from this that Rauch's entire project may be a metaphor for the art-making process.

If the somewhat ponderous, neo-Gothic world around Bruhl (from which kind of environment many of Rauch's ideas have sprung,) has now created a different set of public reactions, then it is worth remembering that Rauch himself still lives in what was East Germany, and is a native of Leipzig. The figures that deport themselves in the paintings shown are realistic and lifelike, yet seem not to bear any relation to any conjured up mise-en-scène of the artist's imagination. The accomplishment he displays is curiously old-fashioned. But Rauch was, after all, trained at Leipzig's ultra-conservative Hochschule für Grafik und Buch Kunst. Indeed, he is still teaching there. His painting may be illusionistic, yet it exudes a contemporary 'difference', undiminished by the seemingly archaic scenes and gestures portrayed. It is Rauch's constantly topped-up dream-bank - with card - that activates the initial compositions.

Of course, initially the viewer gets won over by the seductive colour and by the expressive 'ambience' that Rauch deliberately creates. It is then as if a narrative script has started up, and then is stalled, not to any consternation, it seems, from the figures set out in the scene, in groups or individuals. It is as if there was a curtain call on a stage set, rung up once or twice. Also, these figures stand motionless, frozen as if in some statue dance competition. There is, too, the presentation of a major scale (as opposed to the accompanying minor), and the viewer as participant can feel he has wandered into a world of giants. 'Para' is a theatre scene, and individuals move expressively at various positions close by or further away. The large, vertical painting entitled 'Father' shows a godlike father figure sheltering an oblivious child. Yet another figure, dwarfed in scale, stands close to the viewer edge, carrying a camera, with the intention of capturing the drama. The more recent paintings in this show (mostly of the last two to three years) offer a group dynamic, and seek to convey their own 'Revelations' on massive canvases, both haunting and ominous as future portents. But, one asks, about what mysteries, which enigmas to come? Only Rauch seems to have an inkling. And it is best, perhaps, for the artist not to seek to explain. 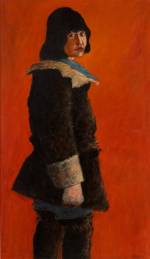