With Pleasure: Pattern and Decoration in American Art 1972–1985

With Pleasure: Pattern and Decoration in American Art 1972–1985

With almost 100 works on show, this exhibition is outstanding for the way in which it takes the pattern and decoration movement seriously as an object of historical inquiry 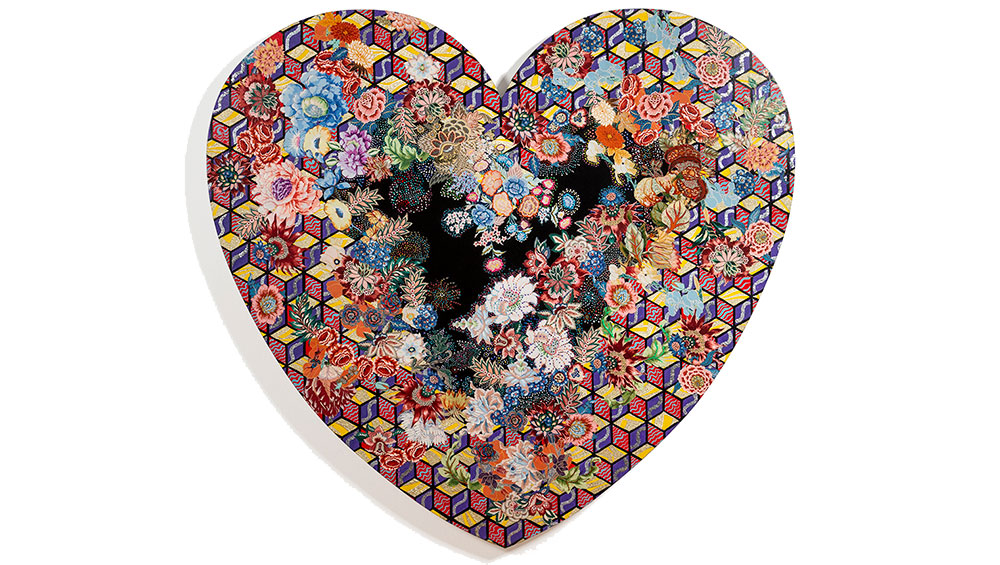 With Pleasure: Pattern and Decoration in American Art 1972–1985 proposes a reassessment of the loosely cohered art of pattern and decoration (P&D), taking its maximalism as both a symptom and the cause of its unwieldy fit within American art history of the 1970s and 80s. First allied around the Holly Solomon Gallery and the 1976 exhibition Ten Approaches to the Decorative at the Alessandra Gallery, both in New York, P&D artists Joyce Kozloff, Valerie Jaudon, Robert Kushner, Kim MacConnel and others looked to Celtic design, American quilting traditions, Islamic architecture, ceramics, Japanese fans and the interior decor of their own family homes for inspiration. At Bard College’s Hessel Museum of Art in upstate New York, to which it travelled from the Museum of Contemporary Art Los Angeles, large-scale works sprawl across 18 galleries; the pastel-pink and ivory dogwood blooms of Robert Zakanitch’s acrylic on canvas Angel Feet (1978) are nearly human size, for instance, while Kozloff’s tile Pilasters (1978) stretch across a full gallery wall. The curator, Anna Katz, organised 97 works by 45 artists, most of them now octogenarians, around thematic groupings of the grid, women’s work, travel abroad, quilts, global abstraction, maximalism, appropriation, the decorative impulse and rooms to live in. 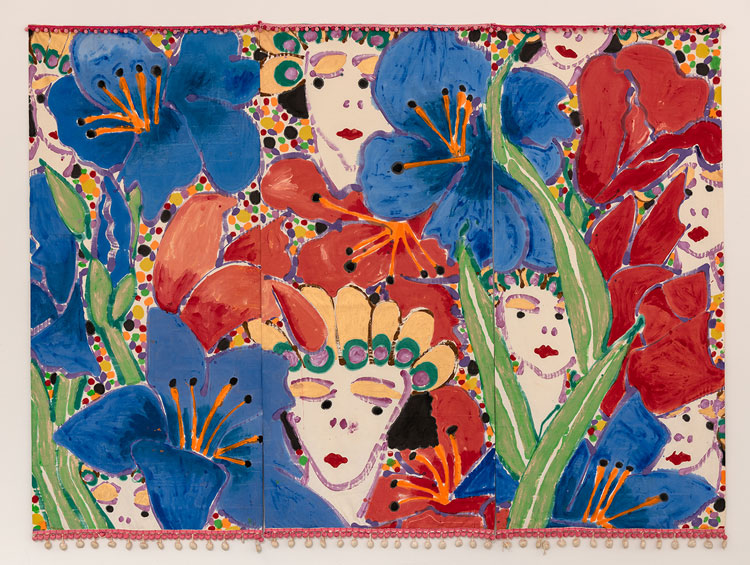 The timeliness of With Pleasure is twofold. P&D appears to be a productive source material for a new generation of artists, such as Talia Levitt, Justine Hill, Meg Lipke and Lauren Luloff, for whom, alongside the craft practices themselves, it serves as visual repertoire and exemplar of alternatives to normative positions. Second, the exhibition partakes of the artworld’s current pluralism, which esteems overlooked contributors, thereby weakening the hegemony of modernism and its primarily white male participants. In this vein, contemporaneous criticism by P&D champions Jeff Perrone and Amy Goldin seems especially prescient. Perrone (quoted in Katz’s essay in the 328-page exhibition catalogue) wrote in 1983: “The decorative is beside the point, wrapped around the line.” Beyond taking this prosaically to mean non-conformism, Perrone’s terms are strikingly redolent of later critical watchwords such as Eve Kosofsky Sedgwick’s theorisation of “beside” as a form of engagement that moves laterally and eschews binaries. Methodologically, besideness is useful for reconsidering P&D by marking it as one option among many, defined not through opposition, negation, or supplementation, but rather as non-hierarchical and already in reciprocal dialogue with other artistic practices. As Katz notes in the catalogue, P&D is often cast as anti-minimalist, and therefore simply as reactive to art of the 60s, but, in fact, it took aim at much longer-standing systems of valuation operative within western art history. 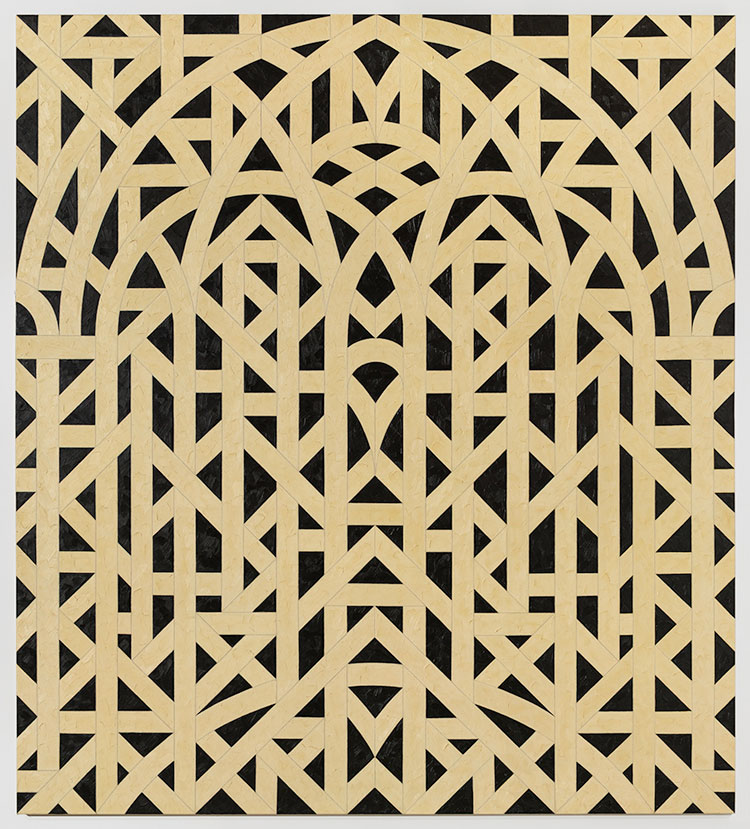 The show makes this case, too. P&D’s visual corollary for non-hierarchical egalitarian systems was the grid, represented here in works by Lia Cook, Dee Shapiro, Constance Mallinson, Tony Bechara and Susan Michod, among others. Shapiro’s tondo Rotunda I (1980) interlaces thin ribbons of acrylic paint applied with a piping tip as if a woven surface, while Michod’s Green Frog (1978), a tower of abutting paint-stamped geometric shapes resembling a quilt, urges abstraction’s associative capacity, its title permission to transgress modernism’s dictate on nonreferential purity. Although feminism was foundational to the politics and aesthetics of P&D artists, as Elissa Auther argues in her catalogue essay on Miriam Schapiro, it is therefore primarily through process and form that identity surfaces as we confront the works today. 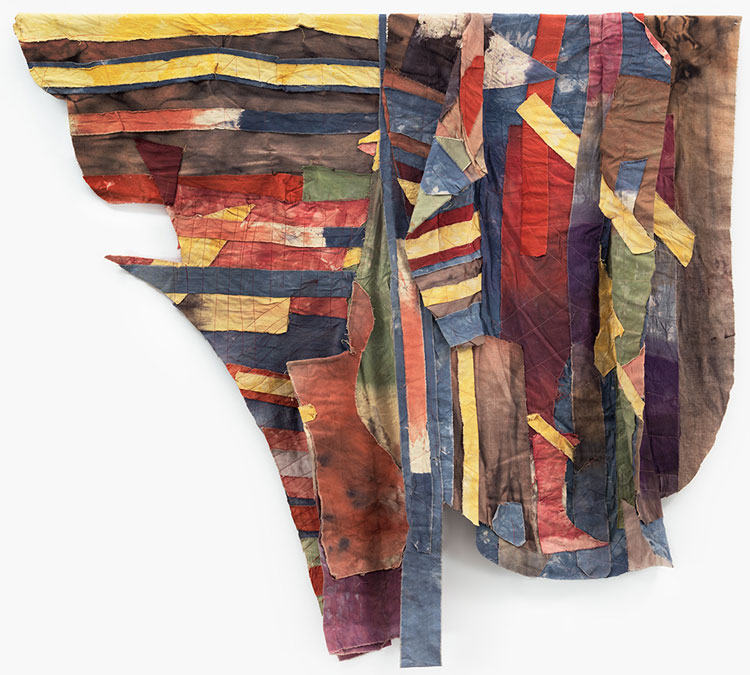 This repetitive mark-making, or the use of kitchen tools – as well as confectionary motifs, in Pat Lasch’s cake sculpture Wilhelmina’s Bird Tower (1979-80) – invoke household labours historically undertaken by women, while a whole gallery dedicated to quilts extends the parameters of P&D to include black artists such as Al Loving and Sam Gilliam whose work honours African American craft traditions. The addition of artists not often associated with P&D, such as Billy Al Bengston, Betty Woodman, Neda Al-Hilali and Lynda Benglis, affirm ornament’s expansive appeal in the 70s and 80s and attest to its capacity to be mobilised to different practical and theoretical ends. 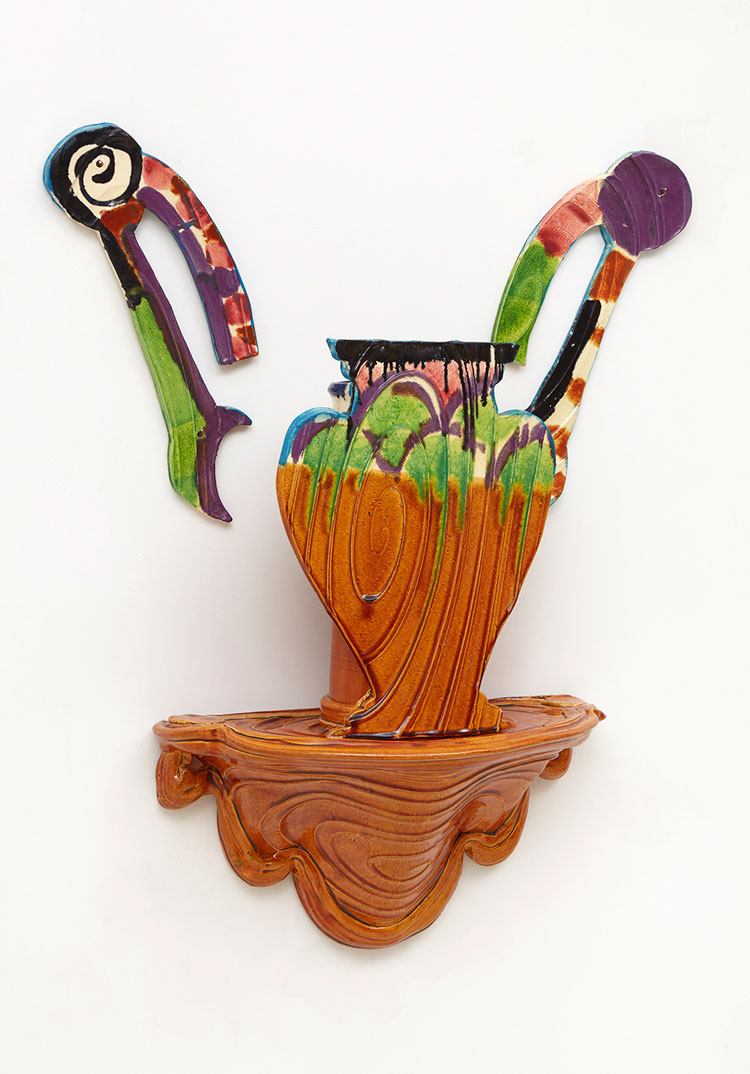 While some artists in With Pleasure were indeed closely allied to their sources of inspiration – Loving cites a 1971 quilt show at the Whitney with rekindling memories of his grandmother’s quilting bee, inspiring him to cut up his abstract canvases – others borrowed more freely. Though largely affirmative, the exhibition acknowledges blind spots concerning cultural appropriation. For Katz, P&D’s “pastiche of global abstract idioms mimics rather than critiques the logic of the museum as a storehouse of styles”, and thus perpetuates power imbalances with regard to race and ethnicity that it sought to redress with regard to gender. Such formal affinities are apparent, for example, in Ned Smyth’s palm tree columns and Arlene Slavin’s proliferating jewel-toned diamonds in her oil on canvas Raj (1972). Relatedly, Sarah-Neel Smith’s illuminating catalogue essay frames P&D alongside Goldin and art historian Oleg Grabar’s censure of the Met’s 1975 Islamic galleries, which they deemed essentialising – an especially egregious oversight since Goldin’s articulation of P&D’s aesthetic and theoretical basis took Islamic ornament as a repudiation of western art history’s elitism, racism and sexism. 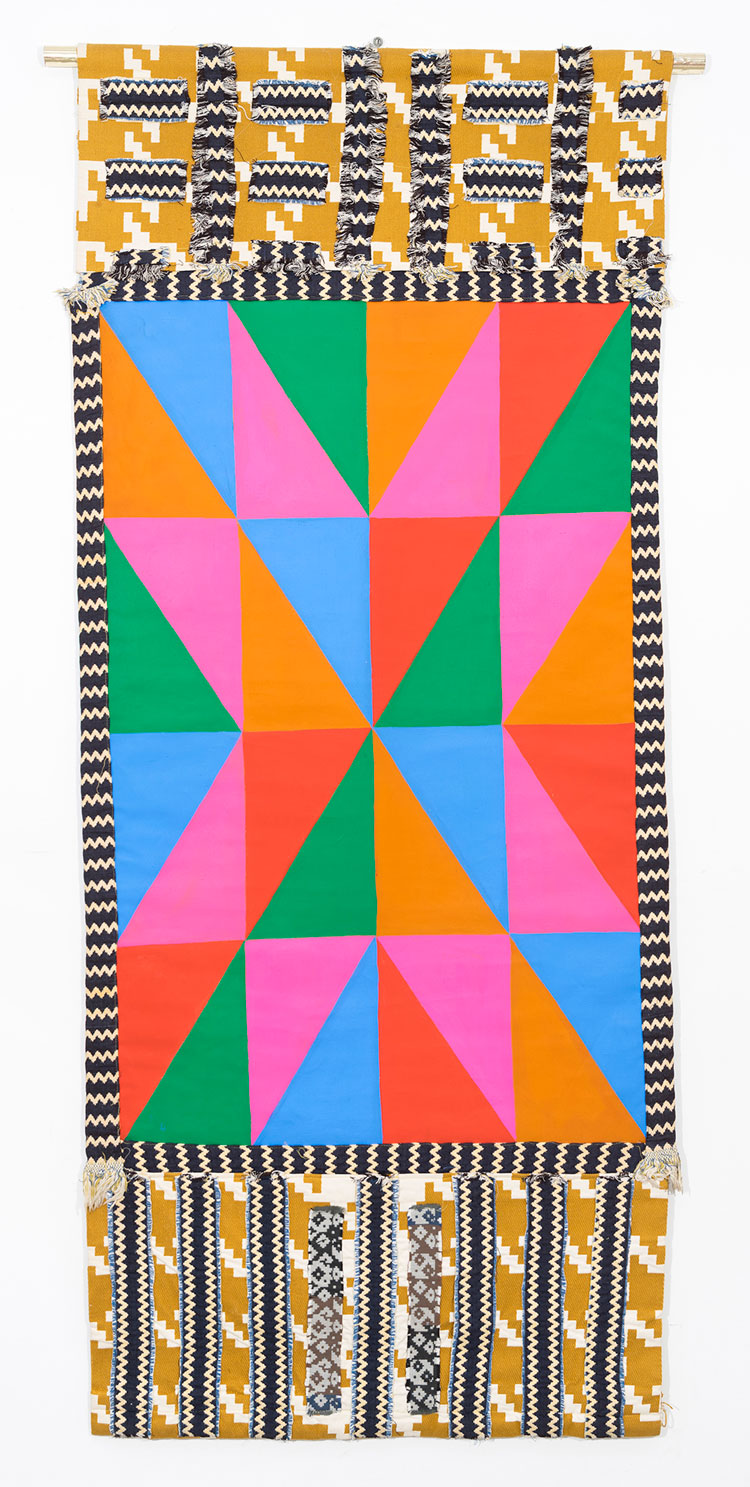 Excepting a 2007 survey at the Hudson River Museum, few shows have taken P&D seriously as an object of historical inquiry, making With Pleasure’s rigor welcome, especially for those of us who teach it. Object labels offer abbreviated historiographies, detailing when individual works were exhibited in landmark P&D shows, noting collaborations between artists proximately on view, or mentioning other exhibitions (such as the Rijksmuseum in Faith Ringgold’s case) that impacted the arc of a career. The exhibition also contextualises P&D within frameworks of American art history, to which it has long been regarded peripherally. By foregrounding the frame of appropriation, With Pleasure points to P&D’s shared concerns with postmodernism and the Pictures Generation, rather than pitting the irony of one against the sincerity of the other. And six of Barbara Zucker’s enchanting Doorknob Ruffles (1979-80) – fanned fabric crisply folded above a glass handle, with a bow tied below – stud the Hessel’s galleries like punctuation marks, each a reminder of those Ruffles that came before and all else that one has seen in between. In this, Zucker’s works perform something like Goldin’s semiotic understanding of pattern based on the constancy of the interval between motifs, rather than its repetition, and further entreat us to more steadfastly remember the sophistication of P&D’s earliest arguments, treated so sensitively here. 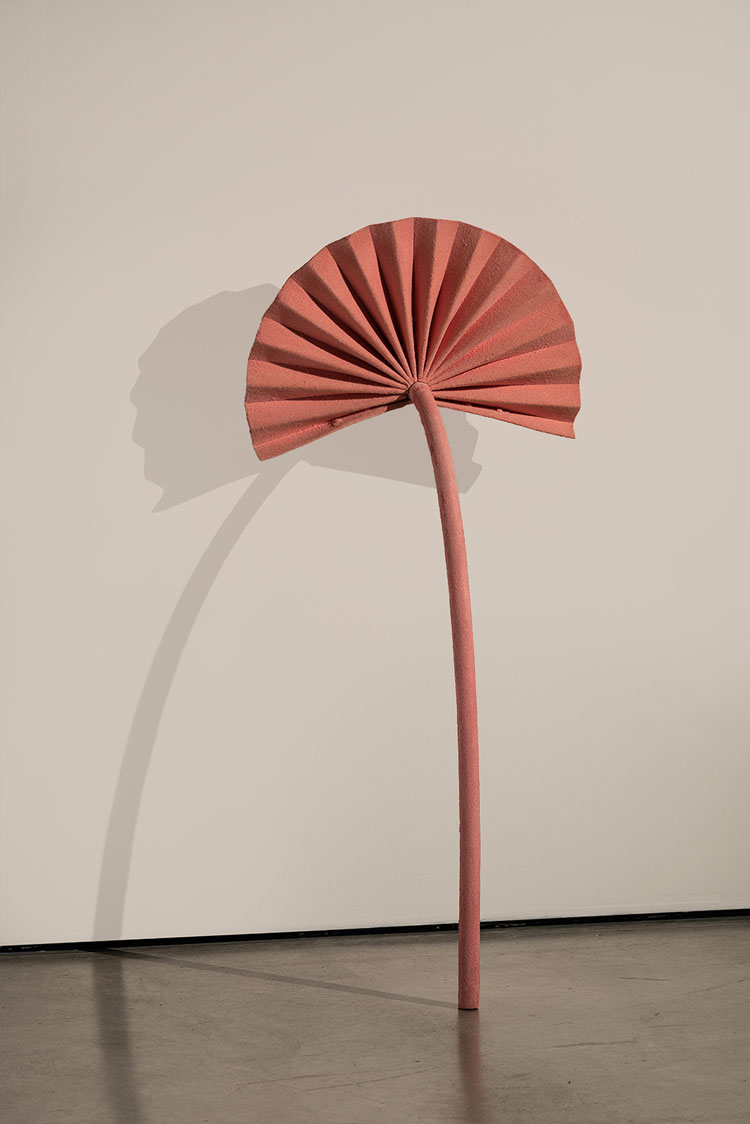 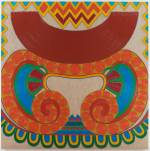 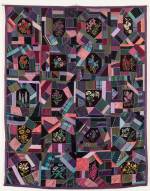 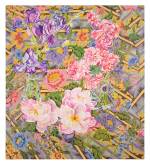 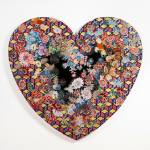