A little gem of a show passed without much fanfare at the Paul Kasmin Gallery in the Chelsea district of New York City from 16 February-25 March 2006. Those who were fortunate to stumble upon this exhibit discovered a small but judicious selection of about 20 exquisite still-lifes, portraits and landscapes by the relatively obscure English artist William Nicholson (1872-1949). All of the paintings on view were small and unpretentious; John Constable would have considered them no more than sketches.

Although generally known today merely as the father of the modern British painter Ben Nicholson (and Mr Kasmin’s great-grandfather), the elder Nicholson came to prominence during the Yellow Nineties as one half of the celebrated Beggarstaff Brothers, a pair of young English artists who redefined the poster. (His brother-in-law, James Pryde, was the other half.) On his own, Nicholson became one of England’s most influential illustrators, famous for 'An Alphabet' (1898) and similar oversized albums of coloured woodcuts and lithographs. He also had the honour of designing all the costumes (except that of Peter) for the original London production of JM Barrie’s classic tale Peter Pan. He is perhaps best remembered in the USA as the illustrator of Margery Williams’s The Velveteen Rabbit (1922). Eventually, Nicholson abandoned commercial art to devote the latter part of his life to painting only what amused him.

Although Nicholson was a brilliant caricaturist and portraitist, as exemplified by his series of coloured woodcuts of Queen Victoria, Mark Twain, Sarah Bernhardt, James McNeill Whistler and other celebrities, created in 1897, the portraits displayed at the Kasmin Gallery are less compelling. Like most painters, Nicholson was at the mercy of the vicissitudes of his sitters. His still-lifes have been compared to Chardin’s, but Nicholson was, perhaps, more in tune with his fellow Englishman, William Hogarth. Nicholson's brushstroke was more aggressive, more vigorous than that of the cool, calculated Frenchman. His pictures are not so much painted as frosted. He borrowed much from Whistler and Manet for his subdued colour and composition, and painterly effects, with a good dose of Sickert tossed in. His early 'Lady in Yellow' (1893) might have been called 'Whistler’s Daughter', being a sweetly tasteful arrangement in tart lemon rather than one in grey and black.

Like Rembrandt and the other Dutch masters, William Nicholson breathed life into his studies of the everyday world around him. He dignified even the most banal subjects with his adroit handling of the brush. As had both Whistler and Sickert, Nicholson captured the interminable dark, dank greyness of London by gaslight in his cityscapes and interiors. His silvery still-life works, 'Stocks and Silver' (1918) and 'Tall Pewter Jug' (1933-39) are stunning monochromatic arrangements that look like vintage photographs. 'The Silver Casket' (1919) would be merely another study in creamy greys, if not for the pair of pale blue gloves and coral necklace reflected in the silver jar. The blood-red blossoms jolt the otherwise subdued blue and still more black and grey in 'Fuchsias in Wedgwood Jug' (1909). Those ruggedly rendered scarlet boots, along with the delicate silk ribbon of a pocket watch make all the difference in 'Miss Simpson's Boots', also of 1919. Nicholson learned from Whistler how a well-placed touch of pink can entirely transform a composition. Perhaps the closest to an abstract painting in the show was the minimalist 'Seascape' of 1909. Its supernal interplay of earth, sea and sky with just a blush of pink on the right shore and a sail in the distance is a small masterpiece of economy. It is time that this exceptional artist was the subject of a proper retrospective in the USA; one that embraces the full range of his achievements. 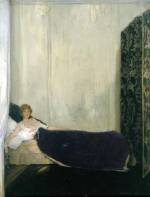