William Kentridge: ‘One needs sometimes to show the power of the irrational world as a demonstration of the limits of the rational world’

William Kentridge: ‘One needs sometimes to show the power of the irrational world as a demonstration of the limits of the rational world’ 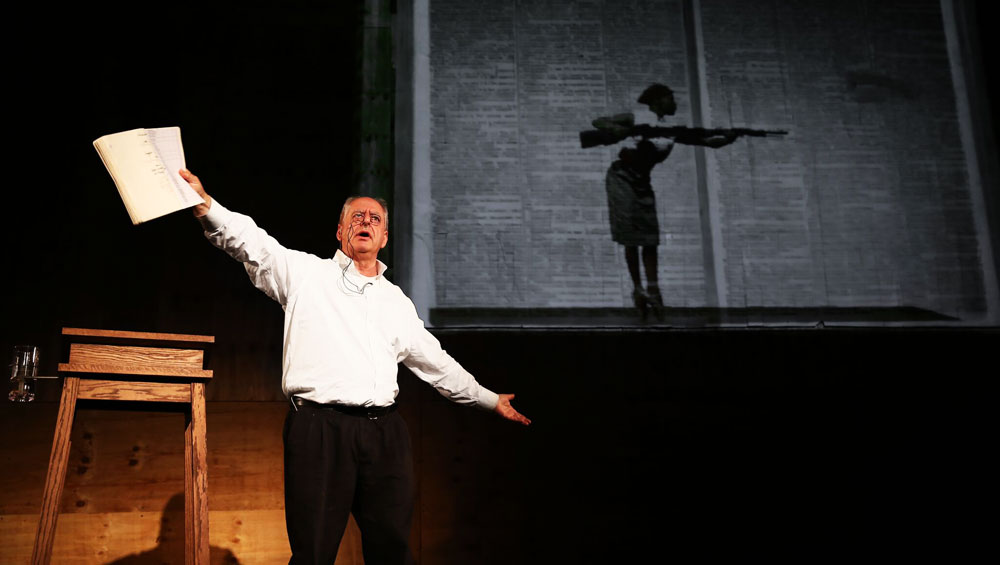 At the beginning of November, William Kentridge staged two performances of Ursonate, a poetic and musical work written between 1922 and 1932 by renowned dada artist Kurt Schwitters. Unlike a classical sonata, Ursonate does not require musical instruments for its performance, just the human voice. The work contains sound poetry modulated by the performer’s recitation, and consists of four parts – Rondo, Largo, Scherzo and Presto with Cadenza – which, taken together, last about 40 minutes.1 There are several renditions of this work by various performers, most of which can be found online on such sites as YouTube and Ubu web, including a three-minute fragment read by Schwitters himself, recorded in 1932.

The interpretation of Ursonate on 5 and 6 November was commissioned by Performa, a not-for-profit arts organisation founded in 2004 by RoseLee Goldberg. Before presenting Schwitters’ work in New York, Kentridge recited part of it during the XLIV Sigmund Freud lecture A Defence of the Less Good Idea, at the Burgtheater in Vienna, in May. The artist performed 10 minutes of Ursonate at the end of the lecture to illustrate his point about the theatricality of psychoanalysis and the use of words to marks the limits of logic. 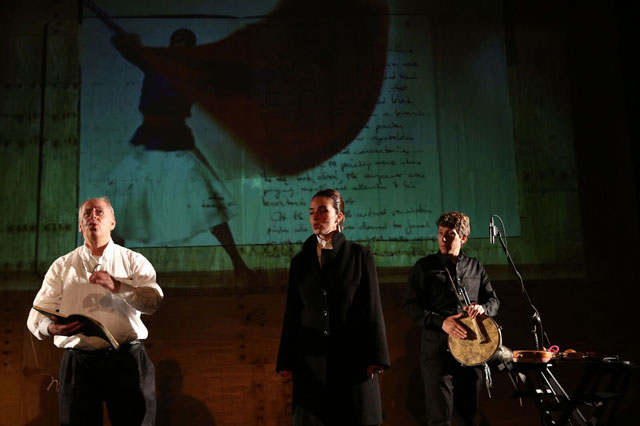 Kentridge’s version of Ursonate differs from that of other performers in that he demonstrates his considerable ability as an actor, orienting the work not only to the listener, but also to the viewer. Whereas the resonance of other renditions of Ursonate can be captured by ear, with Kentridge’s rendition it has to be seen. The artist reads the words from a score, but in a dynamic and engaging way, gesticulating emphatically to draw the viewer’s attention to his embodied presence on the stage. Moreover, a screen mounted above the stage displays a constant flow of animated images of the artist’s drawings, which are orchestrated to fit the flow of his performance. In the cadenza, at the end of the piece, Kentridge invited an actor and a group of musicians on to the stage, culminating his reading in a grand finale. Before leaving New York, the artist kindly agreed to answer a few questions about his take on Schwitters’ sound poem.

Natasha Kurchanova: Could you tell me what inspired this performance? Where does the name come from?

William Kentridge: The name comes from Kurt Schwitters – Ursonate is the title he gave to the sound poem he wrote between 1927 and 1932. “Ur” in German culture means the ultimate front, the basic structure of the sonata. It started as a section of a lecture, given at the annual Sigmund Freud lectures in Vienna, where I was talking about language, the limits of language, the play of free association in the psychoanalytic process and giving the impulse the benefit of the doubt. There is a common area between the artist’s studio and the fundamentals of psychoanalytic process. Both are based on the idea that there are things we know that we do not know that we know, and that all certainties about what we know we usually hide in other things. One needs sometimes to show the power of the irrational world as a demonstration of the limits of the rational world, which lacks solidity. 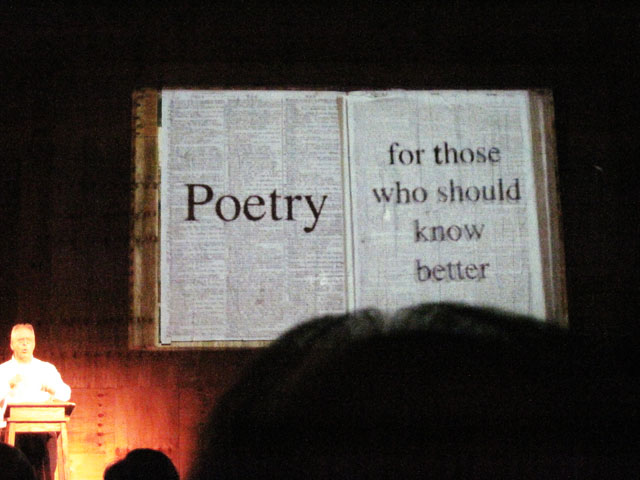 NK: In your work, you relate to directly to the historical avant garde – dada, in this particular performance – but you also turn their devices, such as irony and satire, into a certain visual narrative. Why do you keep going to the beginning of the last century for inspiration?

WK: Every visual artist working now, in the 21st century, is indebted to what happened 100 years ago with dada. Many things that dadaists did in their attempt not to be making art opened up wide realms of work, ways of working and strategies that showed what the parameters of art could be for those of us working 100 years later. The project is different from dada, but directly indebted and connected to it. It was a period when an artist instead of committing to making an oil on canvas could work as easily with sound, power, movement, or dance. [It gave] the visual artist a kind of freedom now that no other art forms have. It is difficult for a novelist to say: “My novel today will be these five etchings.” Or for a poet to say: “This dance is my poetry today.” [Visual art] is kind of a common place of an art world, and it gives us an extraordinary flexibility, freedom, and, in a way, responsibility. 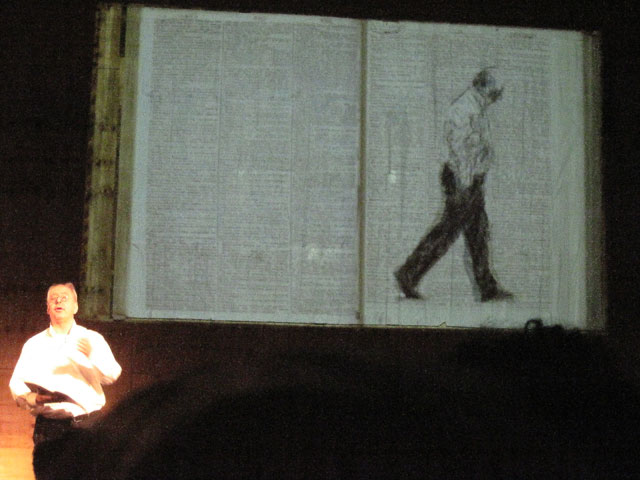 NK: In your previous interviews, you spoke about the centrality of the element of unpredictability in your work and said that, in the process of making a work, an image should precede any preconceived idea. Why highlight the importance of absurd, beyond-sense language now?

WK: Why highlight the importance of the absurd? There is a way of understanding the world that is Cartesian, in which rational argument can be used to define more and more accurately how the world is structured. Academic and theoretical discourse would be a prime example. Instead of saying that there may be something wrong with the nature of this discourse, something gets more recondite and incomprehensible in its attempt to pin the world to language in this way, as I am doing in this interview. It is also a way of understanding the world that is affective. One is that aberration, the absurd, paradox and contradiction are not disturbances at the edge of the rational, but, in fact, are the centre of how the world operates. This has to do with the belief that it is not simply an objective world to be recognised, but that there is always a negotiation between a biographical projection, which the artist as a human being has inside them, and what comes towards them from the world. And that, even in the most coherent visions of ourselves and of the world, what you are doing is making a construction, every day, with huge effort, to absorb certain fragments that come towards us from the world and  to dispense with others; to interpret and construct the meaning of the world and of ourselves. 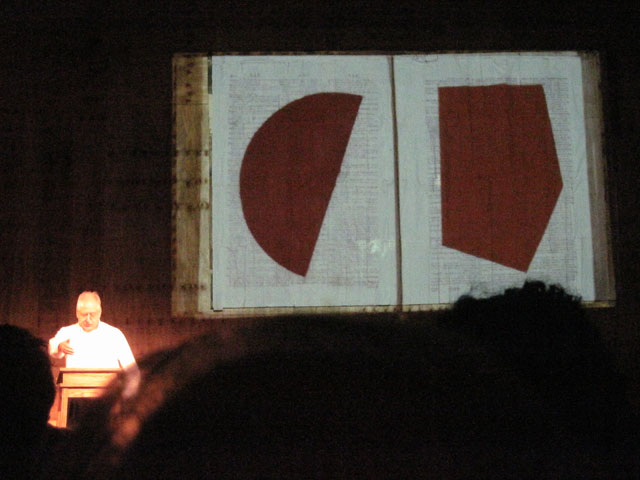 Sometimes, as a demonstration of what this process is, one could use the irrational to show the limits and the parameters of the rational. As in the sound poem of Ursonata, which sounds as if it could be a lecture, when, obviously, it is not a lecture. It is a repetition of different vowels, consonants, rhythms and images.

NK: What role do the images on the screen play?

WK: The images that pass on the screen give me the logic and the rhythm for the performance itself. There are many performances of Ursonata that rely on great musicality of performance, feats of memory, sonority, none of which are really accessible to me. I am always interested in how seeing changes what you hear, and how hearing changes what you see. And the images and the sounds went together in a way of saying, these are the fragmentary ideas that go through our head, from which we do not necessarily make sense, but we recognise in us the pressure to make sense of the world, so you see different images flipping on the screen or the phrases … It’s not that they add up to a narrative, but they push as if they ought to be something that one could understand. And that’s our relationship to the world: as if it ought to make sense in some way.

With political events happening in the world, we are trying to find a shape or a pattern, but obviously if the images or the sounds of the world get too far apart, they would be like white noise and a background noise and a kind of catatonia of understanding. It was a given when doing the project that there would be projections together with the voice that would constitute the Ursonate. There are many other straight recordings by people who do it far, far better than I could hope to do, so clearly oral performance would not necessarily work. I am interested not so much in the purity of the dada movement, but what the dada movement releases for musicians, artists and dancers to giving them a different feeling.

Also, before this, I had never done the entire thing as a performance. I had done two-, three- and even four-minute sections of it during lectures on performances, but performance in full is kind of a departure. There will be fragments of the Ursonate in a dada-inspired text and sounds in another project I’ll work on next year. In a sense, I also decided to remake the end of the piece both to save myself from the loneliness of the stage and to give the audience something to look at and listen to. I also invited some musicians for the cadenza, which is described by Schwitters as a free-form part of the performance [incorporating] fragments from the earlier parts of the sonata.