To commemorate the life and career of Lucian Freud (1922-2011), and coinciding with the National Portrait Gallery, London exhibition curated by Sarah Howgate, which will then travel to Fort Worth, Texas, 2 July–28 October 2012, Blain Southern have produced a museum standard exhibition of drawings in their Mayfair exhibition space and a most superb catalogue. Lucian Freud: Drawings has been co-organised with Acquavella Galleries, New York.

Curator William Feaver, who presented Freud's retrospective exhibitions at Tate Britain (2002) and Museo Correr, Venice (2005), has brought together over 100 drawn images spanning seven decades of Freud's drawing. Feaver met Freud first in 1972; they worked closely on this exhibition until the artist’s death. One is struck first by the remarkable virtuosity of the young artist from the early works on show. The unadorned subject, animal or human, where attention to detail is truly remarkable, creates an immediacy, intimacy and wonderment for life. Curiosity marks his endless activity in charcoal, conté, pencil, pen and ink, and later his marvellous etchings – 70 in all.

Of the artist’s earliest work, Feaver observes: “From childhood there were drawings of goblins and fairies, tables piled high and the pear tree outside the Freuds’ holiday home on the Baltic island of Hiddensee. Later came fantastical jeux d’espirit, sharp images of friends patient enough to sit for him, etchings and drawings demonstrating his love of Ingres.” Freud’s development is presented from this early phase up to the early 1950s, from when he concentrated primarily on his painting.

The show is presented chronologically, the earliest works being those saved by his mother, and preserved. Man in front of a Town (1942) is a war drawing in immense detail. Berlin portrayed by the 17-year-old, is a German toy-like depiction, unaware as he was of Otto Dix and his contemporaries, but familiar with the work of Albrecht Dürer. There is a group of amusing and tender animals works: an upside-down bird, Tommy (c1943), a horse/donkey, viewed head-on; Zebra/Unicorn (1943) and Dead Monkey on a Dish (1943), based on a dead monkey bought by the young artist from the local pet shop and stored in the kitchen stove. Feaver claims the tiny drawing of a walnut is the finest work, drawn as the artist was to the minutiae of life. Instead of courting favour at the Royal Academy, or vying for honours, Freud pursued an independent path: dead chickens, sea urchins, a dead heron, a cock's head portrayed with consummate skill, a sitter Kitty Epstein, ill in Paris, all create a world of truth and imperfection. His choice of subject has the innocence of a child: no distinction is made between humans and animals – both were, for the artist, portraits. Freud used a range of media to capture the essential materiality of surfaces and textures: bamboo, corduroy, thick hair, tousled hair, feathers, facial features.

After the second world war Freud travelled to Paris where he tried etching. He travelled to Poros in Greece in 1946, where according to Feaver, “he filled a sketchbook with drawings of fig trees, lemon trees, and whitewashed houses, goats, donkeys and chickens and the son and daughter of the house in which they lodged”. Like so many artists during the war years and beyond Lucian Freud had to manage without proper art materials, resorting to Ripolin enamel paint and drawing.

The drawings of his mother in 1972, soon after being widowed, are the solemn and exquisite rendering of an individual and a situation. In spite of being completely distraught, Feaver explains, she sat three times a week for her son: “depressed, wary and disoriented, a dignified, cultivated woman at the onset of real old age.” The level of empathy achieved is difficult to approach with words.

Some of his human portraits possess animal-like qualities, like the whippet-like Self-Portrait: a long neck and a clear capacity for speed. Lord Goodman (who was also a friend of Francis Bacon) had regular sittings over breakfast; a final tribute to his father, the architect Ernst Freud, on his deathbed, was endowed with quiet dignity. There are on show, too, drawings of his daughters, Annie and Bella, and watercolour images that have not been seen for 30 years.

In his obituary of Lucian Freud for Time Out magazine in 2011, Ossian Ward wrote:
“Alongside Francis Bacon, Freud epitomised the painterly postwar return to realism that came to be known as The School of London, by depicting anguished bodies and wide-eyed or crumpled faces, unsure of their place on our newly configured, battle-scarred little island. At the end of the 1940s critic Herbert Read dubbed Freud ‘the Ingres of existentialism’ and rightly so, because he was steeped in the art historical traditions of Michelangelo, Rembrandt and Watteau, while also able to channel the anxieties of Nietzsche, Kafka and, dare I say it, granpapa Sigmund”.

Drawing has in the past 10 years been reappraised and now constitutes the subject of academic and practice-led research, and numerous publications. At the National Gallery in the final week of March, a conference, organized by the University of the Arts, London, in association with RMIT University, Melbourne, opened with the discussion: What makes a good drawing? Artists there, including Grayson Perry, Michael Craig-Martin, Stephen Farthing, chaired by Colin Wiggins, attempted to draw out the numerous roles and applications of drawing in contemporary art practice. Few definitions stood up to the physical and spiritually demanding, existential works of the calibre and range of Freud, one of the greatest artists to have worked in Britain in the 20th century. As the Blain Southern exhibition reveals, Freud’s early career was defined by drawing. William Feaver points out: “He himself argued that, just as every painting he did was a portrait – or indeed self-portrait – every painting was essentially a drawing.” 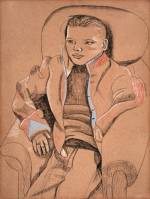 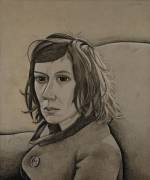 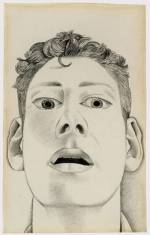 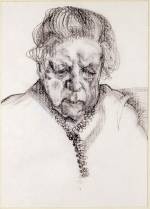