“...in 1948, [at the Venice Biennale] ...Henry Moore walked off with the major Sculpture Prize...the next ‘break-through’ year for British art was 1952 when, in addition to Sutherland and Wadsworth, Britain presented a group of young sculptors—Adams, Armitage, Butler, Chadwick, Clark, Meadows, Paolozzi, and Turnbull.”

Although among artists the Venice Biennale tends to be dismissed as a dealers’ market—which to a considerable extent it undoubtedly is—the British Council is convinced of its importance as an international shop-window, certainly since 1948 when the exhibitions were resumed. For one reason the size of the art audience and its standard of tolerance has risen sharply, particularly in the United States; for another, the pre-war stranglehold of Paris has been broken. As a result other countries make a greater effort to attract international art, and in the process collectors (largely American) and, perhaps equally important, buyers for the many Museums which collect modern work. The Venice Biennale has taken on a new function as an international market and distributive centre, and commercially the prizes are the most important possible boost to the careers of artists and their dealers.

Before the war the results were predictable; it was almost certain that each year the French would sweep the board. There can be no doubt that all kinds of dubious deals were made (bribery is still not to be discounted), but in fact most of the finest artists were French, or resident in France and thus regarded by the French as their own—a liberal attitude which Britain might well imitate. The British can claim to have broken the spell in 1948, when Henry Moore walked off with the major Sculpture Prize, much to the surprise of the French, who had already reserved it for Laurens (who in turn, it was rumoured, purchased a car on the promised proceeds). This first post-war Biennale was hastily convened. With little time to make its choice the British Council diverted an already-assembled Turner exhibition and sent a number of Moore sculptures it owned, with a supplementary group from the artist. Together they constituted a formidable double-act, confounding those who expected Britain to produce neither an old master nor a living genius. Hoping to repeat this success, in 1950 we sent Constable with Barbara Hepworth and Matthew Smith; but with Zadkine in the field the British sculptress was outplaced. Much has been said or whispered about the jury system at Venice. It has greatly improved since before the war, when the Commissarios of all national pavilions were entitled to sit on the Committee. The final choice was largely a matter of bargaining, if not actual bribery, with the French holding a trump card in the form of a promised Paris exhibition—then an irresistible bait, but now more like a deterrent. Nowadays the Jury is appointed by the Biennale authorities and usually numbers seven, two always being Italians. The rest are distinguished gallery directors or critics, and while some may well have human failings the majority can be expected to be above influence. There is, however, a tendency to think ‘chronologically’. Thus in 1964 it was assumed to be America’s ‘turn’, with Rauschenberg bound to win. America’s previous major winner was Tobey in 1958, with Calder in 1952, so the intervals were reasonably spread out. The French, incidentally, still gain a high percentage of the top awards—in 1954, 1956, 1960, and 1962.

From 1948 until today the only major British prize winner has been Chadwick (in 1956), a somewhat surprising choice from today’s vantage, especially when one realizes that Giacometti was a rival. But the French made the mistake of imagining they could take the prize by showing a few plasters and had to wait until a fuller display in 1962 won the honour for Giacometti and themselves.
There are, of course, many other prizes, awarded by the Italian State or the Municipality of Venice, Italian business houses, American collectors, Unesco, etc. In these the British have had a fair, if not spectacular, showing. Sutherland won the 1952 Sao Paulo Acquisition Prize; two years later Ben Nicolson won the Ulisse Prize; David Bright Awards went to Armitage in 1958, Paolozzi two years later, and Dalwood in 1962. (In 1958 Hayter was involved in a farcical incident when an Italian religious order gave him the first prize for a religious work. The short-sighted priest first selected a work entitled Maculate Conception, an understandable error which was quickly corrected.) In 1962 Ceri Richards won the Premio Einaudi and in 1964 Roger Hilton the Unesco Reproduction Prize.

Mrs Lilian Somerville, head of the Fine Arts Department of the British Council, considers that after the Moore prize in 1948, the next ‘break-through’ year for British art was 1952 when, in addition to Sutherland and Wadsworth, Britain presented a group of young sculptors—Adams, Armitage, Butler, Chadwick, Clark, Meadows, Paolozzi, and Turnbull. This clever and courageous move contrasted with the general rule of showing mature, recognized artists, and these young men, with their new vitality and assurance, largely the outcome of Moore’s example and success, made a strong impression.

Two years later this impetus was maintained with Nicholson, Francis Bacon, and Freud, although in the case of Bacon it may have been a case of premature exposure. But thereafter there has been a steady decline. Although Chadwick won a prize in 1956, the so-called ‘Kitchen-Sink’ school—Bratby, Greaves, Middleditch, and Jack Smith—was a great disappointment. Before registering surprise at their choice, however, it must be recalled that they had been hailed by leading critics as a new and vital movement in British art.

In 1958 William Scott had to compete with Tobey; in 1960 Victor Pasmore, partnered by Paolozzi and the graphic work of Geoffrey Clark, Henry Cliffe, and Merlyn Evans, did not make the expected impact. Like Bacon, he is an artist who would probably score at a second showing, while Bacon himself would be a good subject for one of the exhibitions organized by the Biennale authorities themselves, in the Central Pavilion, a privilege not yet accorded to any British artist. Although Dalwood attracted attention in 1962, Ceri Richards and Robert Adams added little to their stature, while at the 1964 Biennale Hilton, Tilson, Gwyther Irwin, and Meadows made a relatively weak group.

How were these artists chosen? The system remains basically the same as before the war, when a major task of the British Council’s Fine Arts Committee was to choose for Venice. Now, of course, it is responsible for selecting many more exhibitions, including Sao Paulo, Paris, and Tokyo, as well as organizing touring shows throughout the world. The last report for 1964–5 lists over forty exhibitions, ranging from the important London: The New Scene which toured North America, to Blake’s Illustrations to the Book of Job which visited Nigeria.

This vast undertaking is directed by a Committee headed by Sir Philip Hendy and a staff led by Lilian Somerville. The Committee includes well-known officials, Norman Reid and Gabriel White, distinguished critics such as Sir Herbert Read and J. M. Richards, and younger blood in the form of Alan Bowness, Norbert Lynton, and David Thompson. But no artists and no dealers—a rule strictly adhered to.
The Committee has changed very little over the years—partly because at first members were appointed without time-limit, so that old members rarely resign, they simply fade away. Since 1960 new members are appointed for three years in the first place, though their appointments have so far been renewed. A membership which includes the Directors of the National Gallery, the Victoria & Albert Museum, the Tate, the National Gallery of Scotland, the Keeper of Art at the National Museum of Wales, and the Director of Art of the Arts Council, with Mrs Somerville as Secretary, leaving only a dozen nonofficial members, might be thought too heavily biased towards the establishment. I am not suggesting that this represents either an undemocratic method or a bad one; it is certainly preferable to a system whereby incoming governments have the right to appoint. But there ought to be a way of avoiding long-term membership and of ensuring regular changes in taste and opinion.

When it comes to choosing for the Venice Biennale, a special sub-committee is appointed. Their decision is final; they report to the main Committee but it is recognized from the outset that they have been asked to choose, not recommend. Mrs Somerville is always a member of this sub-committee, and as with the Government and the Civil Service, or a Board of Directors and its executives, she and her staff exercise some influence. Sir Philip Hendy, Sir Herbert Read, David Thompson, and Alan Bowness were asked to choose this year’s entry. The fact that four of the five artists turned out to be from one gallery was considered irrelevant. The British Council does not think its job is to be ‘fair’—only ‘to enhance the prestige of Great Britain through the arts’. In many other countries age and service are determining factors. The British Council does not consider any such precedence, but since the inauguration of the Paris Biennale for artists under thirty-five, there is a tendency to reserve younger artists for first presentation at that exhibition.

Finally, a word about the pitfalls of ‘pot-hunting’. Prizes are regarded as evidence of success, valuable for impressing and persuading politicians and laymen. The prizes prove that we have good artists, and that the British Council’s expertise is confirmed by foreign authorities. This can lead to the promotion of the fashionable at the expense of more lasting talents. Thus in Venice dead artists no matter how important are never likely to be shown since they would not be valid candidates for prizes; nor, one feels sure, would a major neglected figure such as Bomberg or Wyndham Lewis unless the Committee had a hunch that he might catch the international jury’s attention. And with the cult of youth and the need to give evidence of a ‘with-it’ experimental culture, living veterans or even middle-generation artists not yet seen at Venice inevitably have the dice heavily loaded against them. Studying the list since 1948 it is clear that the average age of the British representation has dropped steadily.

Left: The 1952 Biennale—some of the Graham Sutherlands.

Left: Roger Hilton’s paintings at the last Biennale, 1964. Through the doorway one by Guy Irwin. 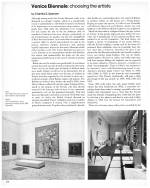 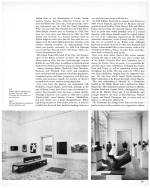 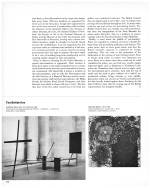