If there was ever a clearer purpose and definition of the respective rationale behind the division of Tate works into Tate Modern and Tate Britain, the present retrospective of the painter Michael Andrews is a reassuring touchstone. Whereas  (not even represented yet) all justifiably claim representation — together with Stanley Spencer — in Tate Modern, the subtle, disquieting, yet ultimately very English works of Andrews, find a natural place at Tate Britain 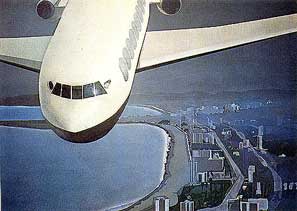 Whether capturing the Australian landscape phenomenon of Uluru (Ayers Rock to Andrews), or the colonising tensions of stags stalking in Scottish deer forests, Andrews displays great picture-making talent; whether hovering over an obscured, anonymous but ominous airliner, or standing back from threatening, masked terrorists at Drummond Castle gardens, Andrews is the cautious English bystander. Deeply moving figurative groupings such as ‘The Colony Room’ from his early period may represent an epigraphic Andrews entry into the London milieu of the l960s, but the mood is till box-camera voyeuristic — the outsider caught inside, and stepping back.

In 1962 Andrews' The Deer Park captured a world familiar to Stephen Ward, Christine Keiller, and other participants of a cinematic and apparently Thames Valley-based decadence (with reference also to Velasquez). All Night Long, a year on, captures in a filmic mode that special ambience, but it is more Shepperton Studios, or at best Losey, than Fellini or Visconti. ‘The Colony Room’ still exists, where acolytes bask in the ambient traces of Bacon, Freud, Auerbach and indeed Andrews himself, as well as Bruce Bernard, Henrietta Moraes, and above all the creator of the original mise -en-scene, Julia Belcher, who had opened the place as early as 1948. As Andrews said of parties in general, people “perform. They succeed or fail. They increase in stature or flop. They put themselves to the test.” Those who flopped were often thrown out by Belcher.

Andrews absorbed and participated with an engaging recklessness from 1954 for over a decade, as one of the regulars who immortalised it all in paint. Appropriately, Andrews is himself depicted by Snowdon in his Islington studio, with the Colony Room painting in the background: the artist emphatic; a member of that select, London glossary, Private View (Bryan Robertson, John Russell, Lord Snowdon, l965). As John Russell related in Private View, Michael Andrews led a double life at the easel for a long time. Some of his paintings were ‘straightforward investigations of the motif before him. They took an eternity to produce, and passages of real lyrical beauty alternated with others patently awkward or unsuccessful’. Concurrently with these, Andrews would be working on elaborate figure subjects; half-dream, half-reality, these subjects usually had strong erotic overtones, and their use of space was arbitrary and strange.’

Russell focuses significantly on the Gulbenkian-owned Norfolk garden painting of the artist’s family at tea as an example of the first period. “This was like an annexe to the classic English novel, so subtle was its mingling of irony and affection, and so judicious its choice of social detail.”

All Night Long comes to Tate Britain on loan from the National Gallery of Victoria in Melbourne Australia. It is in Melbourne too that this English wistfulness, even today, survives, and such ironies and fugitive clashes between l960s modernity and poolside hedonism remain English rather than Californian. Which is why Melbourne perceptively would have acquired it. A brilliant work, an enlightened acquisition, it reveals that second side to which Russell referred, to Andrews’ complex nature, reckless participation, and guilt-ridden withdrawal. This remains the most complete retrospective of Michael Andrews’ work to date.

Andrews’ social documentation (Marilyn Monroe and Ian Fleming are visible in The Deer Park) is no less ephemeral than that of Gainsborough (as in Mr and Mrs Robert Andrews), and will last and enthral generations to come. It was left to Germaine Greer to emphasise (Uluru in mind) the quintessentially English attitudes of Andrews. What is required, following this major exhibition and excellent catalogue, is a full biography to be published that positions Andrews within the English cultural heritage. “I am more of a spectator than I am at most times prepared to admit to myself”, Andrews wrote. Yet surely a spectator in the great English tradition, a bystander, a visual diarist, and one we should increasingly value. Against the short-term crazings of Brit-Art, Arte Povera has survived, as will Andrews: recent ephemera in Britain may have a brief shelf-life. 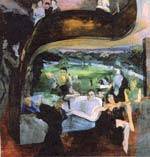