A reclining nude, with ripples of flesh rendered in red chalk, can only be by the hand of Peter Paul Rubens. She is perhaps a study for a plump nymph, intended for a mossy knoll, no doubt to be accompanied by a leering satyr. White chalk highlights the focus of Rubens’ attention. In this instance, his efforts are centred on the landscape of the woman’s torso, its every contour painstakingly described. Through his detailed rendering, he makes the viewer complicit in looking; he makes voyeurs of us as we marvel at his skill.

Drawings pull us in in a way that paintings often fail to do; they bring us closer to the hand of the artist. Whether we are looking at absent-minded scrawls, or doodles in the margins of medieval manuscripts or, indeed, virtuoso studies by a baroque master, we feel, through drawings, a sense of the person who created them. Unseen, the inaugural exhibition of the Gilbert and Ildiko Butler Drawings Gallery, is alive with such treasures, which have been plucked from the Courtauld Gallery’s enormous collection of 7,000 drawings, spanning more than half a millennium. The delicate study by Rubens hangs next to lesser-known names, finished works alongside preparatory sketches and early Renaissance masterpieces accompanying 20th-century innovations. These drawings have been chosen because they have not been exhibited for the past 20 years. And each one has a story to tell.

In the small, sympathetically lit room – which was once used by the “keeper and sweeper” of the Royal Academy – we are met by war, revelry, obsession and desire in the shape of some neatly framed little studies. We are also reminded that religious satire is nothing new. In an irreverent cartoon that would not be out of place in a modern-day broadsheet, a portly friar begs from a slender cardinal, while a pontiff sits, indifferent, in the background. On the wall hangs a picture of a curvaceous woman praying. This blasphemous 17th-century caricature by Pier Francesco Mola seems to be highlighting the less attractive realities of church dealings.

A nearby page of unassuming sketches by George Romney depicts the face of Lady Hamilton, who was, famously, the lover of Lord Nelson. To the right of her hastily rendered portrait seven free-floating studies of her mouth are repeated with almost compulsive fervour. The pronounced Cupid’s bow of her upper lip resembles a bird in flight and a flock of these surreal creatures seem to soar across the page. Romney (1734-1802) was famously enamoured with Hamilton’s beauty and painted her numerous times in many guises. Although simply sketched here in ink, and almost unrecognisable with a shawl over her head, this intimate study reveals much more about the artist, than it does his model.

The women on these pages sit in stark contrast to a group of figures on the nearby wall. Henry Moore’s solid, anonymous, monumental forms, which huddle in the darkness, are a world away from intimate portraits and exotic daydreams. Moore’s figures describe the horrors of the Blitz; the fear and the darkness of subterranean London during the second world war. Despite their sculptural presence, these figures have spindly limbs; they are both fragile and statuesque, resilient and vulnerable; in short, they are concise representations of the human condition.

Not dissimilar in tone is a pen-and-ink drawing by the virtually unknown Valentijn Klotz, military engineer and amateur artist. Completed in the 17th century, it is a surprisingly modern image. His palette of blues and greys resembles Moore’s own and the scene is untroubled by stylistic affectations. These two artists, separated by centuries, viewed the destitution of war through the same weary lens. Also divided by the years, two other men stand out in their common artistic roles. One, the American Larry Rivers (1923-2002), considered by many to be the grandfather of pop art, is represented by a colourful collage, while a modest watercolour, simply entitled Landscape (1861), is by Johan Barthold Jongkind, who, we are told, is “an important precursor of the impressionists”.

The modest, newly fitted Gilbert and Ildiko Butler Drawings Gallery can only offer a tantalising snapshot of the Courtauld Gallery’s vast and prestigious collection. With two such displays a year, it would take 175 years to exhibit every drawing in its care. But the advantage is that we have many more chances to explore the hidden world of the old masters, a diverse world of inner thoughts, irreverent doodlings and artistic innovations, while also getting closer to some lesser-known talents. 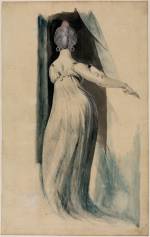 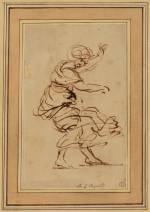