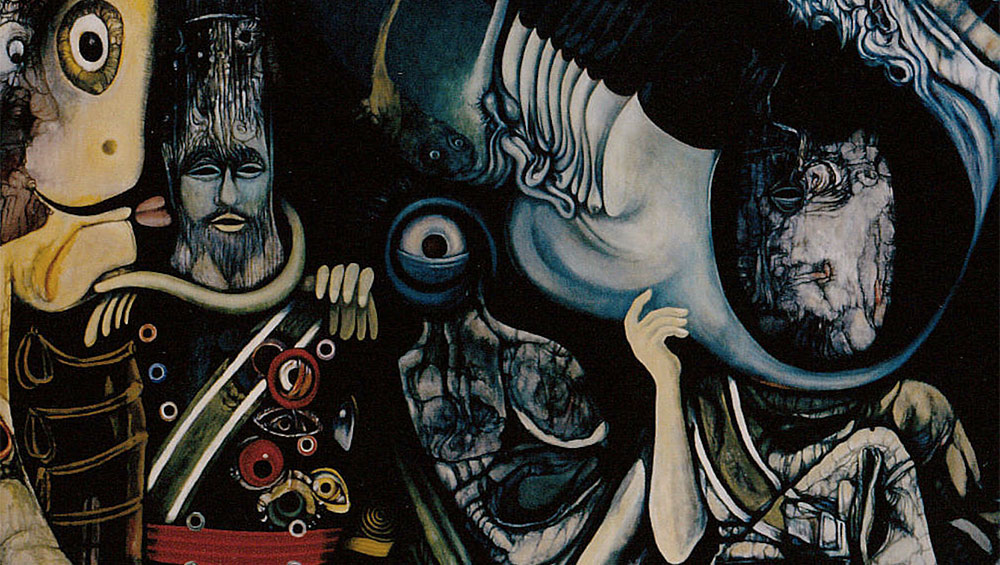 Tokyo has come a long way since its humble beginnings as a provincial backwater called Edo. Today, the sprawling metropolis is home to 37 million people. Its bewildering scale is captured by the Japanese photographer Nishino Sōhei, whose photo collage Diorama Map Tokyo (2004) opens this ambitious exhibition, which attempts to chart 400 years of artworks from the Japanese capital. Comprising different scales, wonky angles and countless vantage points, Sōhei’s personal cartography is made with thousands of images taken on his walks around the city. Presenting Tokyo from all angles, it sets the scene for a show that offers an equally dizzying array of artistic perspectives on this remarkable, ever-evolving cultural hotspot. 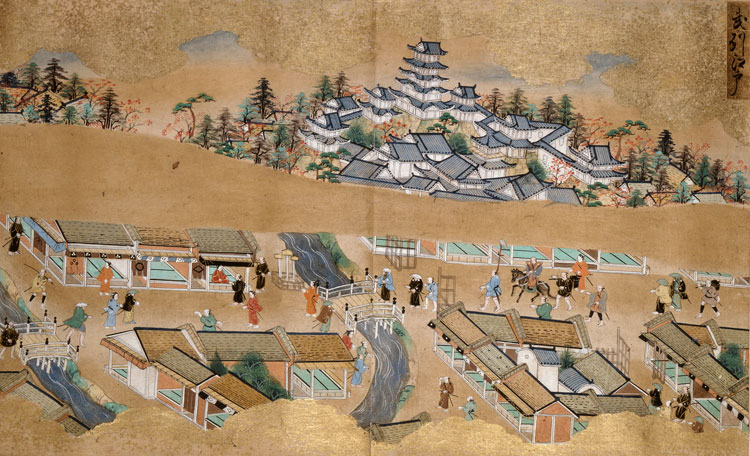 Life in Tokyo is precarious. The city, situated at the convergence of four tectonic plates, is overshadowed by the ever-present threat of destruction. Earthquakes, fires and tsunamis have wreaked terror over the years, but they have also inspired artists. For instance, the first volume of Katsushika Hokusai’s celebrated series One Hundred Views of Mount Fuji (1834) includes an imagined scene depicting the great Hōei eruption of 16 December 1707, in which terrified citizens flee for their lives as buildings collapse all around them. During the Tokugawa period, also called Edo period, (1603-1867), the city suffered about a hundred major fires, including the deadly blaze of 1657, which raged for two days and claimed 100,000 lives. Jacob van Meurs’s 1670 print depicts the giant flames engulfing buildings as horrified people watch in shock and despair. 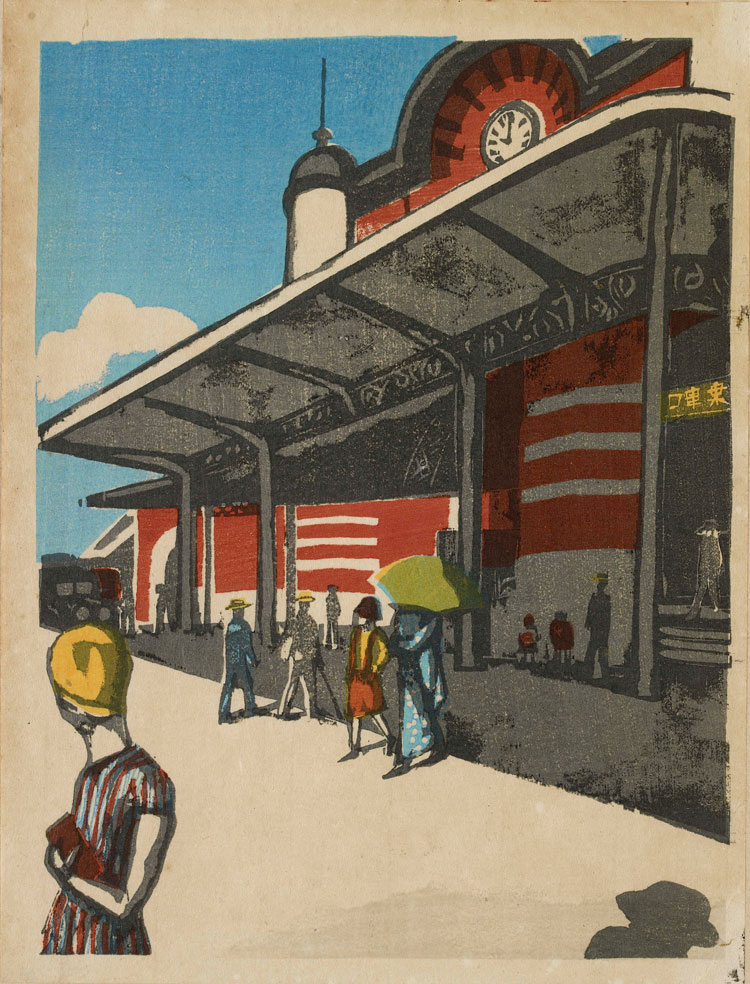 It is not just natural disasters that have brought destruction. Sixteen square miles (4,144 hectares) of the city were destroyed by American firebombing in the second world war, resulting in the death of another 100,000 civilians. Among the architectural casualties was Tokyo station, a European style neo-baroque building designed by Tatsuno Kingo. Its former glory is glimpsed in Onchi Kōshirō’s charming 1931 woodblock print, which was republished in 1945 as part of a series commemorating famous Tokyo sites lost to the war.

Nearby, the city’s postwar reconstruction is documented in Hayashi Tadahiko’s black and white photographs showing the mix of destroyed buildings and new constructions that littered Tokyo in the 1950s. His gritty images reveal a city of contrasts: modern homes and entertainment venues springing forth amid crumbling edifices and poverty. 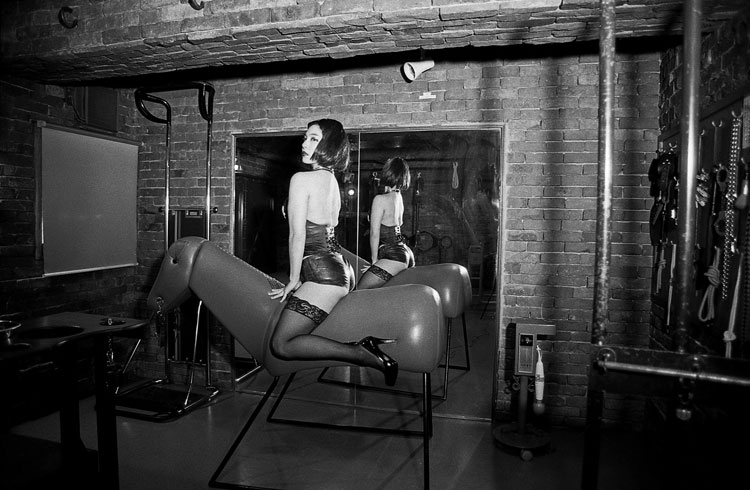 Urban social problems persist in modern Tokyo, with homelessness seeing a peak in the 1990s. Noticing the increase in cardboard homes at the time, Ryūji Miyamoto took to the streets to document what he called “the hunter-gatherers of the contemporary city”. His somewhat voyeuristic photographs are as much a testament to Japan’s economic slump as they are to the resourcefulness of those down on their luck – one makeshift home is constructed from umbrellas. The alienating nature of modern city life is explored by Koizumi Meiro, whose video work My Voice Would Reach You (2009) shows a man standing in a busy street, attempting to phone his dead mother but speaking instead to bemused customer service representatives at various Japanese companies. It is a humorous setup, but it becomes increasingly uncomfortable to watch. 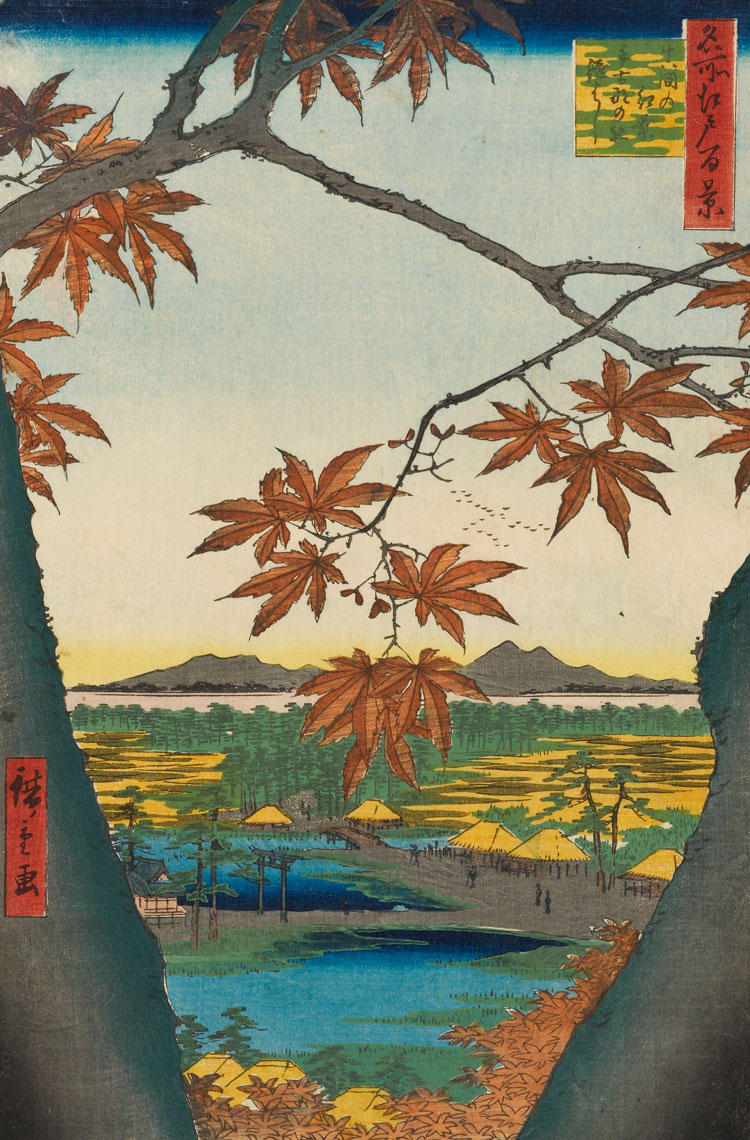 The ugliness of city life is countered by an outstanding selection of woodblock prints from Utagawa Hiroshige’s celebrated series One Hundred Famous Views of Edo (1856-58). One image shows a fresh, snowy morning with fishing boats; in another, the delicate forms of maple leaves partially obscure a rural vista. Other highlights include Suruga Street (1856), with its fine view of Mount Fuji that mixes western style linear perspective with Japanese “bird’s-eye” perspective, a technique that is used to great effect in Jūmantsubo Plain at Susaki, near Fukagawa (1857), a stunning composition showing a majestic eagle diving for prey above a snow-covered marshland. 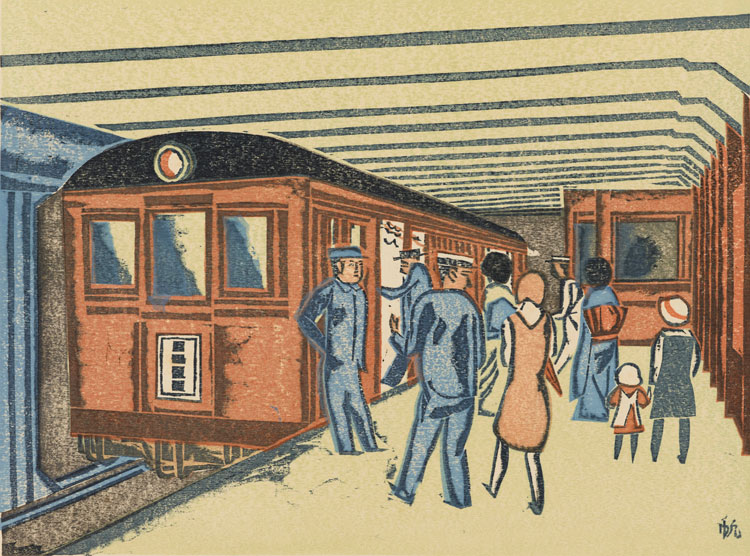 Hiroshige’s influence has cast a long shadow over Japanese printmaking, and it is refreshing to find Yamaguchi Akira’s accomplished recent wood engravings of modern Tokyo, which make explicit reference to the great master’s works. His colourful series New Sights of Tokyo mixes contemporary views and elements of fantasy, causing you to do a double-take. Shiba Tower (2014), for instance, depicts Tokyo’s famous 1950s red-and-white communications tower, yet its lattice framework is shown supporting elements of traditional Japanese architecture. Akira’s works also bear the influence of Shin-hanga, an early-20th-century movement that sought to revitalise traditional woodblock printing by combining European art with techniques and subjects inspired by the Ukiyo-e genre, which flourished from the 17th to the 19th centuries. A fantastic example is found in Kawase Hasui’s Shinagawa (1931), a rainy river scene brimming with nostalgia for a bygone era; the only clue that we are in the modern age is an electricity pole. 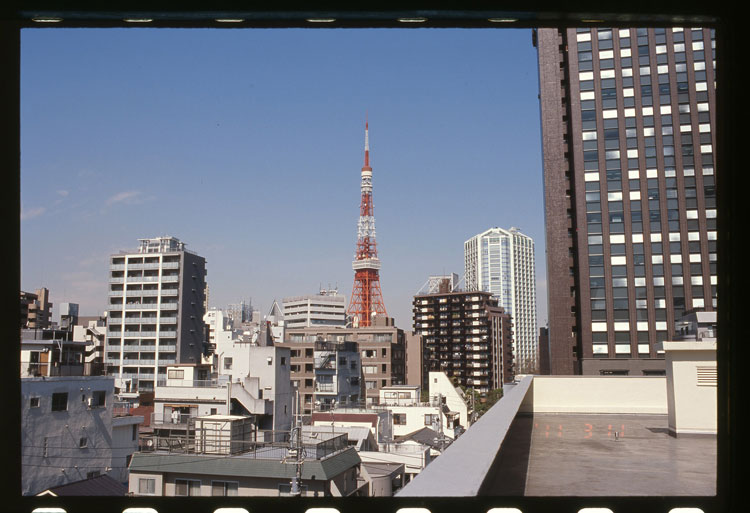 Literally meaning “pictures of the floating world”, Ukiyo-e refers to the pleasure districts of Edo and a whole room is dedicated to prints depicting various popular leisure activities. Here, we see visitors enjoying the cherry blossoms at temples and shrines while other prints show the spectacle of sumō wrestling, which became a popular form of mass entertainment. Likewise, kabuki theatre was famed for its sensational storylines and magnificent sets and several prints show kabuki actors – who were all male – including Tōshūsai Sharaku’s exquisite 1794 portrait of a man dressed as a courtesan.

The superb selection of Japanese graphic art that constitutes the lion’s share of this exhibition testifies to the strength of the Ashmolean’s collections. Yet, while it is clear that Tokyo’s inhabitants loved their downtime, little is revealed about how they made their livings. In fact, the only profession to be explored is the oldest one: a painted scroll from the 1600s shows the Yoshiwara pleasure quarters, a licensed red-light district from which Samurai were banned, though they still snuck in – straw hats hide their faces, but their swords give the game away. The seedy theme continues with the assorted collection of drunks, strippers and undesirables in Naitō Masatoshi’s 1970s photographs of Tokyo after dark, while Aida Makoto’s collage Uguisudani-zu (1990) presents a vision of cherry blossom constructed with the advertising cards of call girls. 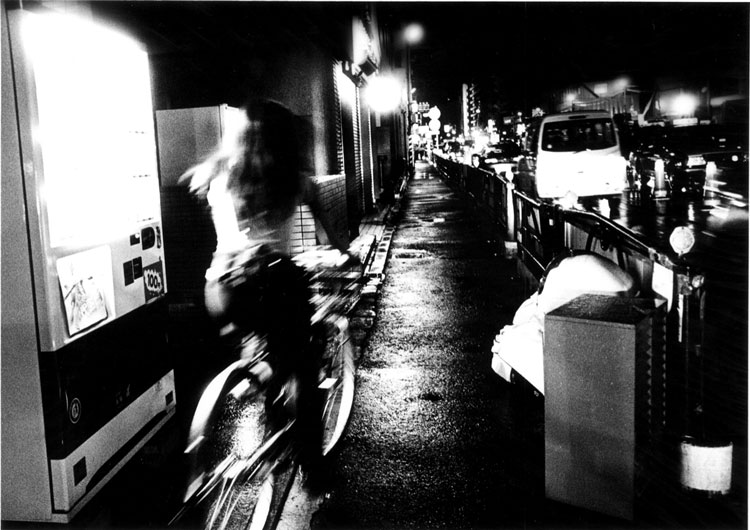 Considering it was Tokyo’s hosting of the 2020 Olympic Games that provided the impetus for this exhibition, it is surprising to find that there is virtually no mention of sports and the only references to the Olympics are acerbically critical. Take Hi Red Center performing their Street Cleaning Event (1964), which is documented in Hirata Minoru’s photographs. Dressed in lab coats and face masks, the Japanese art collective meticulously scrub the city’s pavements as a wry comment on the Japanese government’s “clean up the city” campaign ahead of the 1964 Summer Olympics. Elsewhere, Aida Makoto’s anti-olympiad painting Tokyo 2020 (2018) is an irreverent lampooning of the games, in which crudely drawn characters perform absurd sports activities.

In 2016, the performance collective Chim↑Pom staged a parody of Hi Red Center’s Street Cleaning Event. Their irreverent video installation Super Rat (2006-11) closes this exhibition with the artists running around Tokyo’s grimy backstreets, chasing the city’s gigantic, poison-immune rats. They capture several of the creatures, which they later had taxidermised and painted yellow to resemble the popular cartoon character Pikachu. For the artists, the rats’ ability to adapt and evolve symbolises the Japanese people, who have lived under all manner of hardships. It is a far cry from Hiroshige’s charming vision of Japan’s capital, but a clear testimony to the fact that Tokyo’s artists, like the city itself, are forever reinventing themselves. 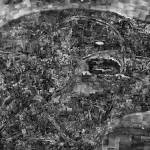 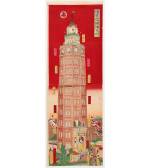 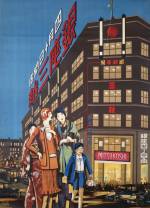