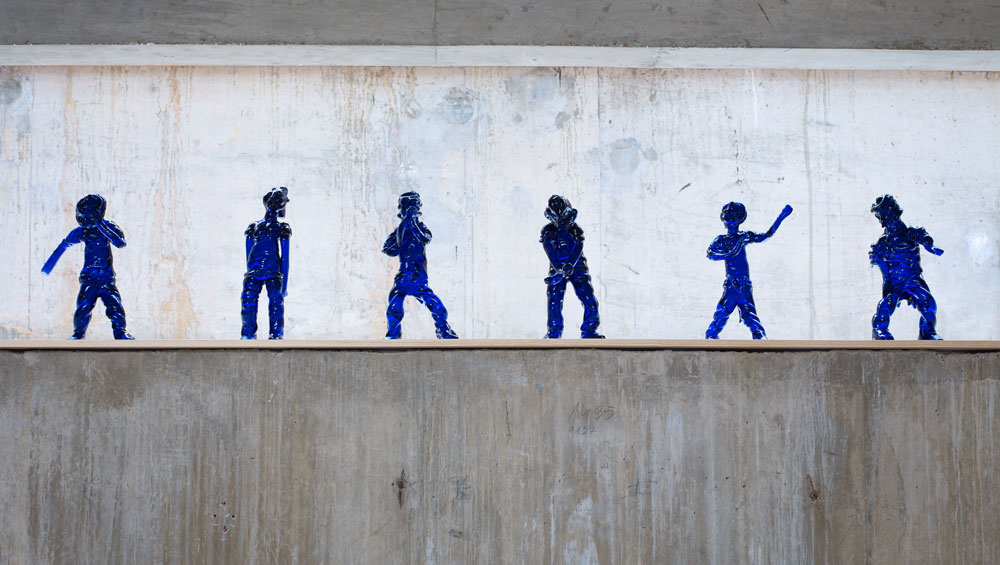 Be careful what you do at Frith Street Gallery, for there are eyes everywhere. Some, such as the cartoonish incisions in the cheerful yellow ovaloid dubbed Reborn as a Stone (2015), seem cheery and innocuous. Others, such as the two fearsome faces of the Janus-like ceramic sculpture Grosse Doppelköpfe Nr 8 (2017), gaze with a weary determination. There are wise eyes, curious eyes, reserved eyes, livid eyes and even two pairs of eyes on a book. 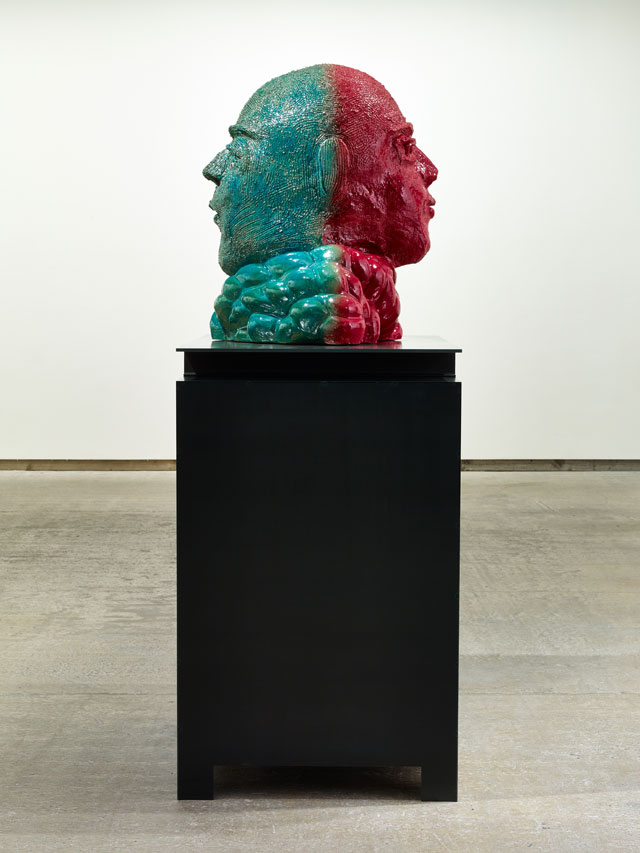 Welcome to the unnerving realm of Thomas Schütte (b1954), one of Germany’s most significant living artists, and presently the subject of an exhibition at Frith Street Gallery’s spaces at Golden Square and Soho Square. The former presents sculptures in Murano glass and glazed ceramic – two materials that Schütte has frequently turned to in recent years – while the latter largely showcases his watercolours. For London audiences more used to the steel and bronze works that dominated his 2012 Serpentine Gallery show Faces and Figures, these substances might come as something of a surprise.

Schütte’s ghouls and grotesques may seem worlds apart from the astringent conceptualism of the 1960s and 70s, but it is to this era that Schütte owes his initiation into artistic practice. Aged 18, during a family visit to Documenta 5, he encountered Sol LeWitt, Blinky Palermo and Daniel Buren. It proved a damascene moment, and the following year he enrolled in the Kunstakademie Düsseldorf, that miraculous cradle of postwar European art. Here, Schütte’s tutors included Buren, Gerhardt Richter and Fritz Schwegler, and one can detect comparisons with each in his output. 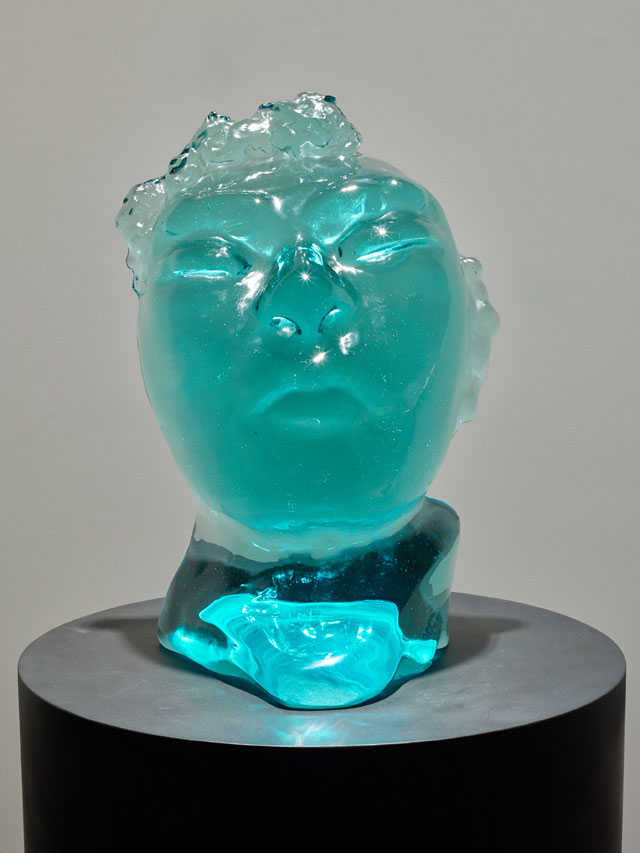 Schwegler – who remains unfairly obscure outside Germany – offers the clearest aesthetic parallel. His multidisciplinary practice included miniature statues that mingled humans with household objects, best displayed as curiosity cabinets, and paintings and drawings of surreal instances that evoke the absurdist literature of Franz Kafka and Daniil Kharms. Schütte’s watercolours in the Deprinotes series (2006-07), 20 of which are displayed at Soho Square, are worthy heirs to this tradition. Some, such as Angsthaesin (2006) and Stressed Flower (2007), feature imaginary creatures straight out of Jorge Luis Borges’ bestiary; others, such as A Song for the Deaf (2007) and Bye Bye (2006), are wryly amusing jokes. There is a palpable warmth and good humour here, which serves as a pleasing counterbalance to the more sinister artefacts at Golden Square.

The most sinister of all is the monumental Aluminiumfrau No 8 (2001), part of the Frauen series. Like Richter, whose photo-paintings often feature distorted figures, Schütte frequently morphs aspects of the human form until it becomes uncanny. Aluminiumfrau No 8 is a shocking mutation of a reclining female nude. Its aquamarine and gold sheen calls to mind the gaudy bling of postmodern design, while the industrial steel table on which it reposes forms an uncomfortable bed. Straddling the boundary between figurative and abstract, it looks like a Henry Moore gone horribly wrong. It is as if the male gaze has gained the power to strip and mutilate its subject’s flesh. 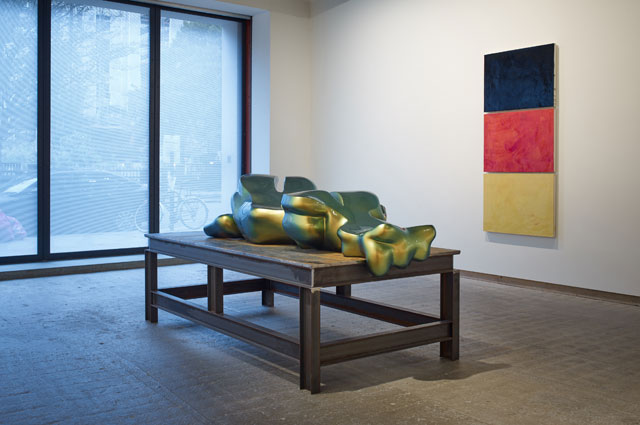 With Buren, Schütte shares an interest in spatiality, manifested most clearly in a fixation with architectural models, from the dispersed stairways of Mann im Matsch (1982) to the rust-hued Nuclear Temple (2017) exhibited at this year’s Skulptur Projekte Münster. The sole example at Frith Street, a 1:25 model Getty Hütte (2016), splits the difference between a classical mausoleum and a Californian modernist villa. It is reminiscent of the elegantly era-pilfering buildings of the Italian postmodernist Aldo Rossi, who often synthesised disparate features into archetypical forms. Spray-painted bright red, it teeters precariously on a steep slope. Two tiny doors at the back seem to invite you in, although the destination is unknown. It dabbles in familiar typologies while also being disconcertingly alien – a common trait of Schütte’s work.

This dichotomy is especially present in his figurative sculptures, perhaps the crowning facet of his practice. The basement at Golden Square is full of such works. Six Glassgeisters (2011) stand on a concrete shelf and explode with latent motion, like a frantic jazz ensemble. Part of the long-running Geister series of ghostly beings, they are part spirit guide, part buffoon. The translucency of their deep blue Murano glass gives them an odd ethereality. 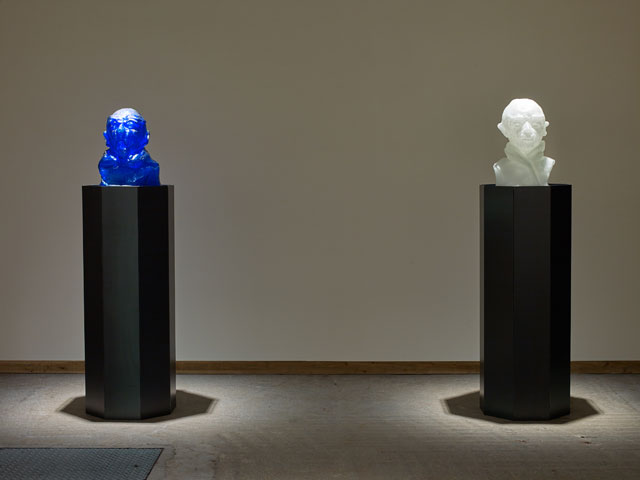 Nearby, Berengo Heads No 11 (2011) comprises two glass busts on steel plinths. Both depict a wizened visage in surpassingly different emotional states. The first, matt white as if carved from compacted ice, glows with goodwill; its partner, in a glossy blue, howls out in incandescence. Are these two modes of the same being, embodiments of emotions or strange apparitions? Their combination of excellent craftsmanship and a taste for the grotesque proclaims Schütte an heir to Franz Xaver Messerschmidt, the 18th-century master of character heads, and the 19th-century satirical caricaturist Honoré Daumier.

The eclecticism of this show can be exhausting, and some of the exhibits should surprise even those familiar with Schütte’s roving interests. Flag A to F – a series of six 2017 pieces based on the German flag’s tricolour – might appear from a distance to be painted canvases. Move closer and it becomes clear that they are actually trios of ceramic panels, each glazed to distinct effect. On one, the lower yellow section becomes gold with ring-like formations; the red slab above features bubbling protrusions and action-painting strokes. On another, the black segment reflects the light into an illusionary constellation of stars. Installed on the gallery’s walls, they gain an almost architectural quality. Although arresting, they are somewhat inscrutable. Has Schütte, like Jasper Johns before him, alighted on the flag as a generic image, or is this some sort of comment on his native land?

An element of inscrutability runs through much of Schütte’s oeuvre, which is all the more compelling for it. It never ceases to prompt questions whose answers often remain elusive. What do the paired ceramic sculptures Book (2006) and I-Book (2006) have to say about the march of technology? What is the part-kangaroo, part-crocodile creature in the watercolour Untitled (2007)? One aspect of Schütte’s genius, on healthy display at Frith Street, is that his creations make one wonder and wonder. 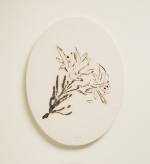 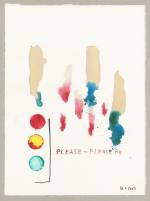