Daniel Buren’s transformation of Strasbourg’s Musée d’Art Moderne et Comtemporain demonstrates his powerful use of colour. It is hard not to be moved by this meditative installation

Admittedly, I don’t know what the exterior of the Musée d’Art Moderne et Contemporain (MAMCS) looked like before Daniel Buren (b1938) coloured its glass walls and 25-metre-high canopy with his tinted films, but it is hard to imagine it now without this stained-glass effect, sitting as well as it does on the Adrien Fainsilber building to the edge of the picturesque Petite France quarter of Strasbourg, seat of the European parliament. Reflecting the colours of the late summer flowers that spill from the window boxes and over the edges of the nearby ponts couverts, they alter the interior of the museum as much as they do its external appearance. Whichever gallery you enter, both in the modern and contemporary permanent collections, there are few corners in which you can stand where the dappling effect of pinks, blues and yellows doesn’t fall across your feet, reminding you that the touchstone of all art – of all visual perception – is colour.

“For me, colour is pure thought, and therefore completely inexpressible, every bit as abstract as a mathematical formula or a philosophical concept,” Buren once explained in an interview. “Colour is a huge problem. It seems to me difficult to apply rules to it. Are there any? At every moment, colour has to be invented. There are no safeguards.”1

If it is a case of taking risks, Buren seems happy to accept the challenge, since his use of colour is as pure and constant as it gets. With a clean and unadulterated palette and an artistic language reduced to essentials – namely the use of 8.7cm-wide vertical stripes, glass, light and chromatic values – his interventions have transformed numerous acclaimed buildings the globe over.

His project for Strasbourg is twofold, with the second part taking up the 600 sq metre temporary exhibition area, filling it with 104 larger-than-life-sized, variously shaped building blocks, half white, half coloured, with each colour-scheme acting as a mirror-image of the other, bisected down the centre of the large room. In the white half, the end at which, logically, you should enter (since it is nearest to the museum’s main door), there is a sense of utter oblivion, timelessness, spacelessness, maybe infinity – a monochrome white bath, in the words of the artist. With the ceiling, walls and floor also all painted white, it is hard to tell where the installation starts and finishes, and where the heavens above begin, encouraged, as you are, to look upward, by the pointing of the 6- metre-tall towers with triangular pinnacles, rocket-like in their construction.

Down the centre of the gallery, the blocks form a passage or tunnel: square shapes with round windows, neatly lined up. Each window frame is painted with black and white stripes, in Buren’s trademark width, giving the sense of motion, of the thread of a screw. “Stripes have no meaning as such,” Buren explains. “They are simply very ductile instruments for seeing. They acquire meaning when used […] The stripes I use are the least interesting element, the equivalent of piano for the pianist, just an instrument.”2

Moving from whiteness to colour, the atmosphere becomes more playful, since the blocks now really do emulate the wooden bricks with which most of us once played as children. In fact, Buren, who had it in mind to work with something like this for a long time before the Strasbourg opportunity arose, bought himself a set and sat for long hours playing at the table, trying to recapture his childlike spirit. Speaking of Matisse and his return to art-making, with colourful, “childlike” cut-outs, later in his career, Buren has said: “When Matisse resumes with the eyes of a child, he resumes at the same time with the most skilled complexity, and it’s this, both bright and joyful, which is the most childlike [about his work] because it doesn’t give the impression of being calculated – it’s neither laboured nor pretentious. It’s this innate complexity that is nearly wholly lost as one grows up; it’s neither talent, naivety, nor freshness, it’s the intelligence of shapes and colours.”3

This half of the installation issues a call to action, inciting the visitor to want to run and leap, climb and play. It matches perfectly with the works of Jean Arp, feted Strasbourgian artist, of which there is a large collection in the permanent display across the hallway.

The central construction, where coloured blocks meet colourless, where north, south, east and west collide, forms a pagoda, a point of union. Perhaps, moving in this direction, from whiteness to colour, could be seen as representative of birth and of entering the world of terrestrial children from the purity of the womb? On the other hand, you are, of course, free to circulate within the gallery, and my own preference was to return from this brightly coloured proto-architectural landscape to the somehow brighter still, dream-like half, suffused with warm light, exuding exaltation, devoid of Buren’s vocabulary of colour, yet nevertheless speaking very clearly in his unwavering voice.

Might the journey not be in this other direction? From childhood, through our earthly life, to afterlife or eternity beyond? Or even, coming full circle, to a period of gestation before rebirth? I am not a spiritual person but such is the powerful impact this meditative installation had on me, as I sat and stared up at the wonderland towers. And perhaps that is what draws the two aspects of this double installation together, for, by now, I was really beginning to believe I might have stepped through the looking glass. 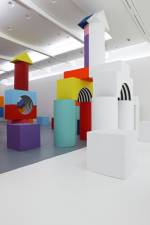 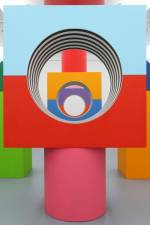 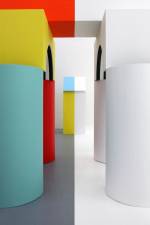 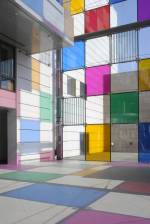 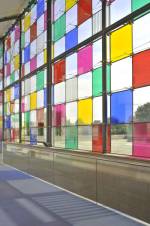