A bracing reflection on social and environmental issues that have been foregrounded during the pandemic, this exhibition, curated in real time during 2020, acts as an emotional, but uplifting wake-up call 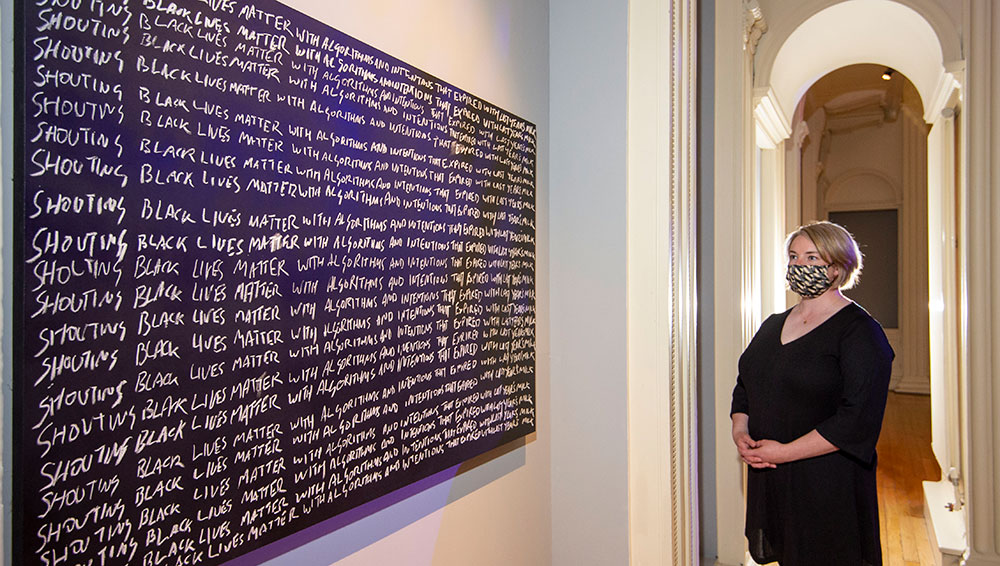 The Normal, as an exhibition experience, is truly an emotional rollercoaster. In that, as in so many other respects, it reflects the journey we have all been on over the last 18 months, as we adjusted to new versions of “normal”. In the space of a few hundred yards, as we progress through the white cube-style spaces of the contemporary Talbot Rice rooms to the neo-classical galleries of William Henry Playfair’s original building (formerly a Natural History Museum), we go from shocking testimonies of violence against women (which has been dubbed the silent pandemic) through richly coloured microscopic representations of bee pollen - a celebration of Edinburgh’s spectacular honey harvest of last year facilitated by the absence of traffic pollution – via a 3D printed sculpture of a deep-sea vent, the mining of which bodes ill for the planet, culminating in a hanging, multi-hued crocodile sculpture made of plastic waste. 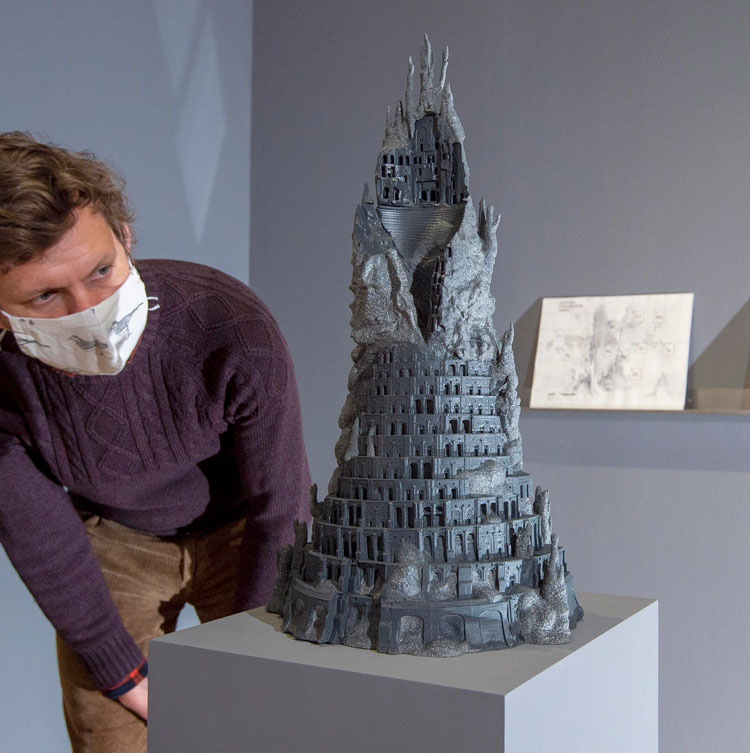 “It is a little bonkers,” admits Tessa Giblin, the director of the Talbot Rice Gallery and curator of this exhibition, but that quality reflects our pandemic reality. After the social, economic and cultural landscape as we knew it shut down in March 2021, she was inspired by the writings of the American art historian Caroline Jones in Artforum and Arundhati Roy’s article in the Financial Times, The Pandemic is a Portal to propose an exhibition that reflected not just the issues that came to the fore during the course of last year – racial, economic and gender inequality, as well as planetary crisis – but which addressed other impacts, including Talbot Rice’s own environmental and historic cultural footprints as an institution.

Giblin says: “We decided we were going to curate in real time, to try to make an exhibition that reacts to this experience and pulls a lot of these threads together. We also cut shipping to an absolute minimum – there are only five things that have been shipped in the whole exhibition. And they are small.” Given the tight time frames, Giblin decided on a mix of existing and new works and works that could be reconstituted in Edinburgh. The aforementioned 3D sculpture was sent on a digital file from Anca Benera and Arnold Estefán’s studio in Bucharest, printed in the workshops of the gallery’s sister institution Edinburgh College of Art, and finished by a local artisan.

But while the nitty-gritty of the gallery’s logistical, environmental and ethical accounting is admirable, it is not something that should override or even colour the experience of the art, which clearly has to succeed on its own merits. And that it surely does. 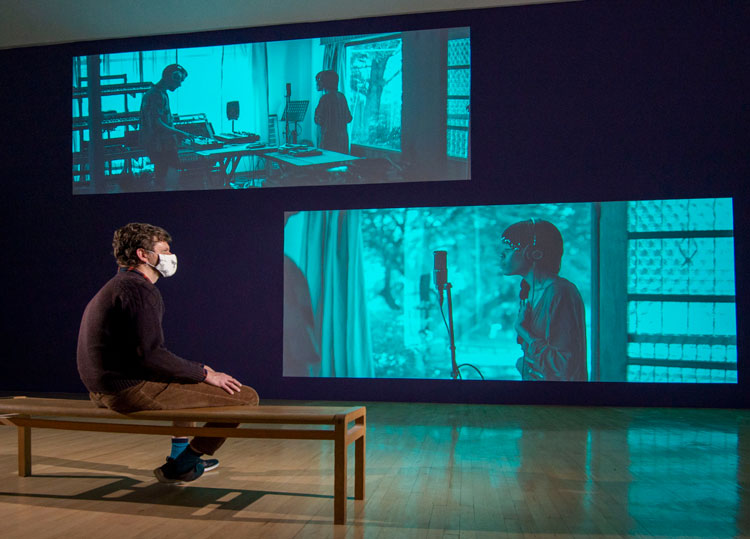 On my visit, the darkened room that greets you at the entrance was filled with the haunting, repeated refrain of REM’s Everybody Hurts, performed on the screens in front of us by the South African singer Msaki, with the musicians Lebogang Ledwaba and Thembinkosi Mavimbela. This is a tribute song chosen by child sexual abuse survivor Deborah Ho-Chung to represent hope and resilience, and is part of the South African artist Gabrielle Goliath’s work in collaboration with local communities of rape survivors.

On the dark wall to the right of the screen are the gruelling stories of Ho Chung and the other four people Goliath has selected for this version of her series, titled This song is for … Each survivor has picked a song and a colour that have significance for them. Each is featured, a day at a time, in rotation with the film tinted in their chosen hue. What is also distinctive about these cover versions is the glitch in the song – in REM’s case, the repetition of that title refrain, as if the needle of a record were stuck – which is intended to represent the interruptions in people’s lives that such traumas inflict, the victim’s feeling of being held in “suspended animation”.

Being in that room, in the presence of that song while reading these stories packs a huge punch. Benches have thoughtfully been provided for those in need of a moment to pause and gather their resources. It is a powerful piece of work and a profound reminder that, whatever those of us lucky enough to be walking around this gallery in Edinburgh have been through, others have been through far worse. 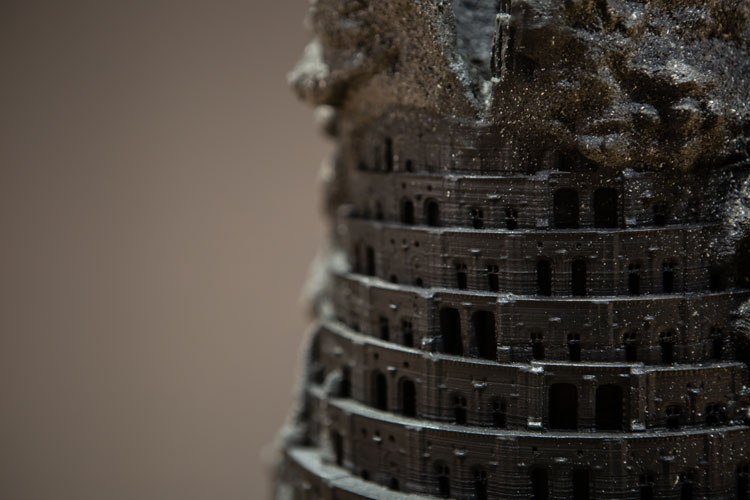 After the full-body impact of Goliath’s work, the complex layering of material and meaning behind Benera and Estefán’s 3D-printed sculpture, The Delusion of the Commons (2021), which sits in the stairway to the left of this room, slightly passed me by, but it is worth closer scrutiny. The artists have generated a sculpture that is designed to echo in form both the Tower of Babel and the deep-sea vents in the ocean that are being eyed up or actively plundered by private enterprises for their precious mineral deposits. This exploitation of “the last untouched places on Earth”, as the catalogue rightly points out, will have untold consequences. Drawings nearby are inspired by the single-cell micro-organisms that live in these vents, some of which produce the enzyme polymerase, used in Covid-19 tests – an enzyme the artists have recreated and mixed into the pigments with which they conjured some adjacent drawings. Such a layered and complex work might have benefited from a quieter space (rather than a stairwell, within close range of those haunting survivor songs) in which to ponder it.

However, one of Giblin’s most impactful selections, on the opposite wall, more than holds its own here. Addressing the issues of structural racism that have been highlighted over the last 18 months, we have one of Larry Achiampong’s Detention Series (2016-ongoing), whereby he invites cultural creators and participants to pick a line from a selection of highly charged social media comments or memes that he has harvested and edited over the past few years. The protagonists then write them on a blackboard in chalk as a form of reflection and a kind of performative penance. Giblin’s own choice of detention appears first, a blackboard filled with her white, chalked lines: Everybody Wants to be Black Until It’s Time to Be Black. She says: “It’s meant to make the writer think about solidarity and the performance of solidarity to get a bit of cultural kudos.” There are four more detentions arranged throughout the exhibition by Giblin’s colleagues: the student association president, the rector of the art college, the principal and the vice-chancellor. Says Giblin, gleefully: “We are putting our institution in detention.” 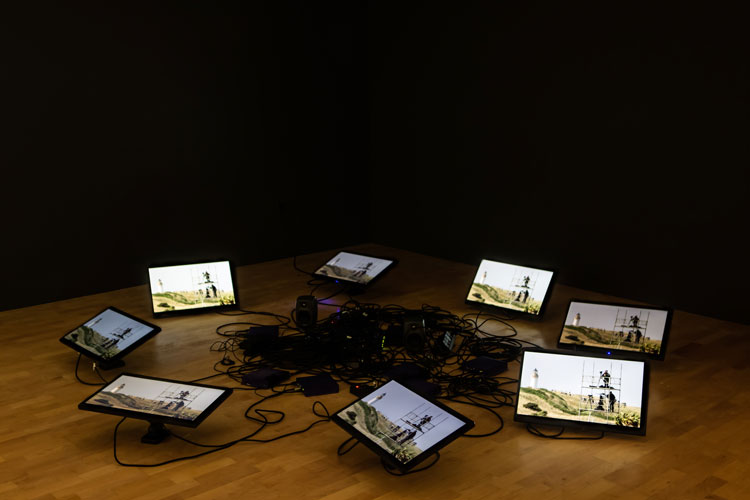 Up the stairs on to the next floor, a tangled webbing of black cables leads to a circle of small screens comprising Jarsdell Solutions Ltd’s Solution for Normality (2018-21). Each screen plays collaged footage filmed before the 2020 pandemic through which the Glasgow-based collective, artists Rae-Yen Song and Michael Barr try to articulate our problematic and exploitative relationship with nature – which, arguably, led to this pandemic, with the monetisation of wildlife as meat for wet markets.

An early synthetic biology work by Alexandra Daisy Ginsberg, in collaboration with Sascha Pohflepp, sits quietly round the corner. Presented as a series of botanical drawings, Growth Assembly (2009) speculates on the possible creation of “tools” from mutated plant parts genetically engineered for human convenience – for example, to be assembled as pesticide sprays; a commentary on scientists’ widespread faith that we can use science to resolve future apocalyptic scenarios (which in themselves are triggered by our blind devotion to science as the key driver of “progress”).

Scottish avant-garde pioneers Boyle Family appear next, with four photographic works that look eerily modern, but were, in fact, taken in the 1970s. Part of their Multi Human Being Series, attempting to map social density, photos of people on busy streets and places of congregation were created through long exposure single shots to reveal the layers of activity. They feel utterly contemporaneous to the current debates about human hotspots and alarmist analytics around likely disease transmission. 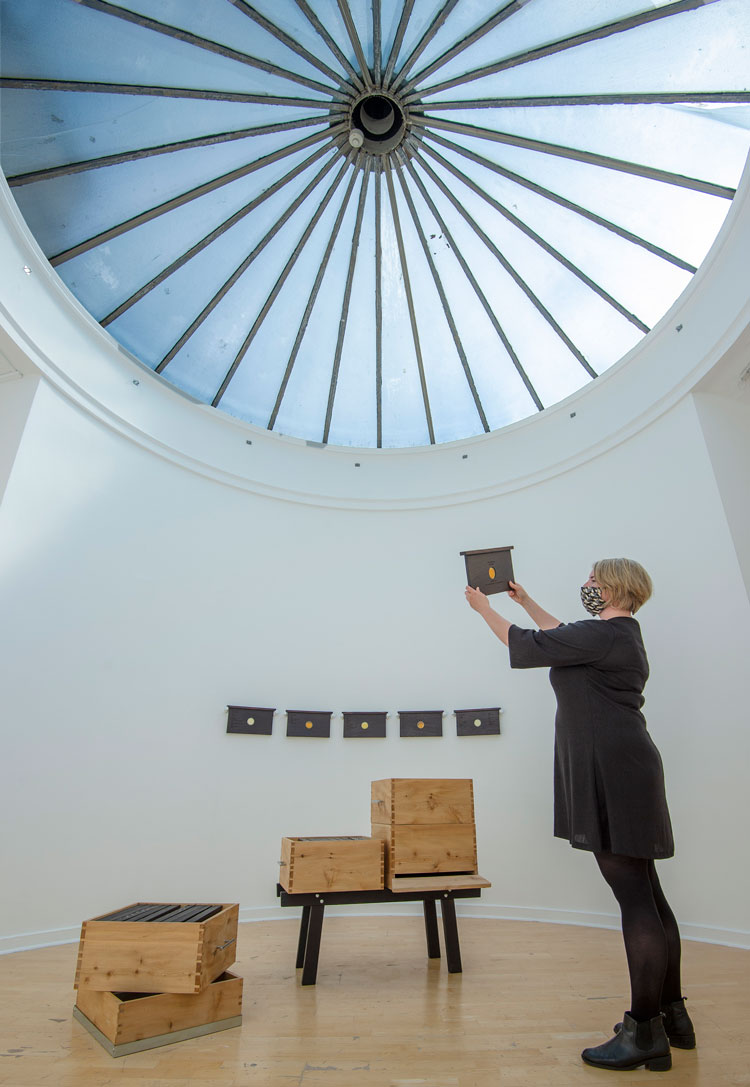 Weaving around and through these spaces – floating at eye or chest level, like the pollen particles they represent – are beautiful microscopic images of bee pollen, part of Tonya McMullan’s series The Lure of Tomorrow’s Harvests (2021). McMullan has been collaborating with local beekeepers and scientists at Edinburgh’s Roslin Institute to examine the impact of 2020’s dramatic drop in air and road traffic pollution on bee pollen and honey: with wildflowers proliferating in fields, along roads and in city centres, it is said to have been a bumper year. These images represent the specific plant grains in various types of honey. Specimens of local honey have been gathered for McMullan by members of the Edinburgh & Midlothian Beekeepers’ Association and are represented in their own dedicated room – a circular room lit by a rather lovely Georgian skylight that gently illuminates the bespoke honey-storage cabinets created by local cabinetmaker (and hive-creator) Michaela Huber, as a library of 2020 honey specimens, with pull-out frames for each type of honey, that can also be displayed around the walls. 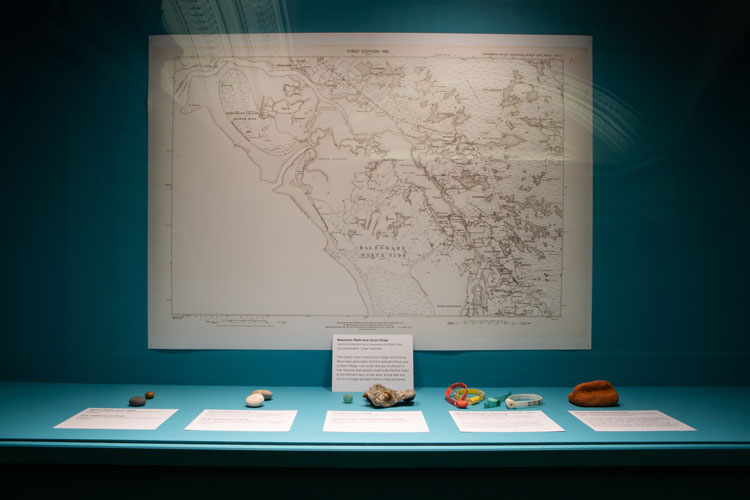 The work is the perfect primer for the physical transition into the Georgian Gallery, formerly Edinburgh’s Natural History Museum. Here, along the mezzanine balcony that overlooks the main gallery, is Amy Balkin et al’s A People’s Archive of Sinking and Melting (2012-ongoing). Presented along the walls in classic museum vitrine format are maps and photographs, pieces of flotsam and driftwood, which over the course of the exhibition will be added to, documenting the areas of coastal erosion around Scotland; community participants will be sending in additional objects and photographs to help form an archive of erosion for Scotland, which it is hoped may be presented at the Cop26 in Glasgow (the latest UN Climate Change Conference of the Parties, which was supposed to be in 2020 but is now taking place this November).

Dangling over the gallery floor is Sarah Rose’s Open Source (crocodile) 2021, a sinuous, crocodile-esque carapace comprising glowing, gem-like scales made from recycled plastic bottle lids that Rose has sourced locally and transformed in her studio in Glasgow. It draws on her previous project in the Philippines where, rather than ship work from one spot to another, she chose to design and transport with her the means of production. With the help of a local workshop in Manila, she melted and moulded locally retrieved waste plastics to make sculptural works, highlighting the problematic issues around recycling (so much of which still ends up in landfill).

Femke Herregraven’s Corrupted Air (IBRD CAR 111-112), 2018, draws our attention to the relationship between disease and economic systems, with three lightboxes that – should you put in the effort to examine them – reveal some startling facts about the links between global trade networks and the transmission of plagues. 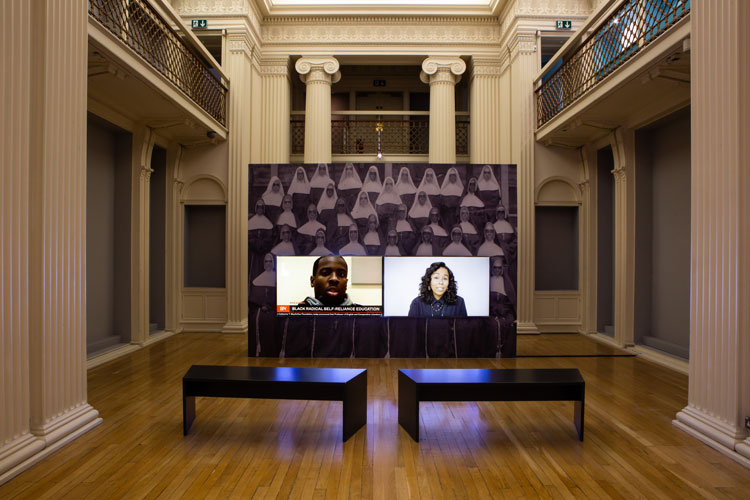 But the main event in this room is undoubtedly Kahlil Joseph’s two-screen BLKNWS® (2018-ongoing): first seen by many at the 58th Venice Art Biennale 2019, this mesmerising collage of found and archive, historical, contemporary and newly shot footage celebrates African American lives and perspectives, along with contributions to politics, sport, music and world events. As the catalogue says: “It isn’t just a critique of the (white) media, it’s a non-linear challenge to the very idea of objective journalism.” The feed is also semi-live, as Joseph updates the footage frequently from his HQ in Los Angeles.

Giblin is clearly hugely invigorated by this whole experience: “It’s so much fun to work like that - tear up the rules, get stuck into the artwork and see what we can do,” she says. As a visitor, it is also a galvanizing and bracing experience, both a critical examination of the state of the world around us, and a call to action.