From rejecting cultivated gardens in favour of wild spaces to using traditional craft rather than modern techniques, the artists in this show throw new light on how we look at the world 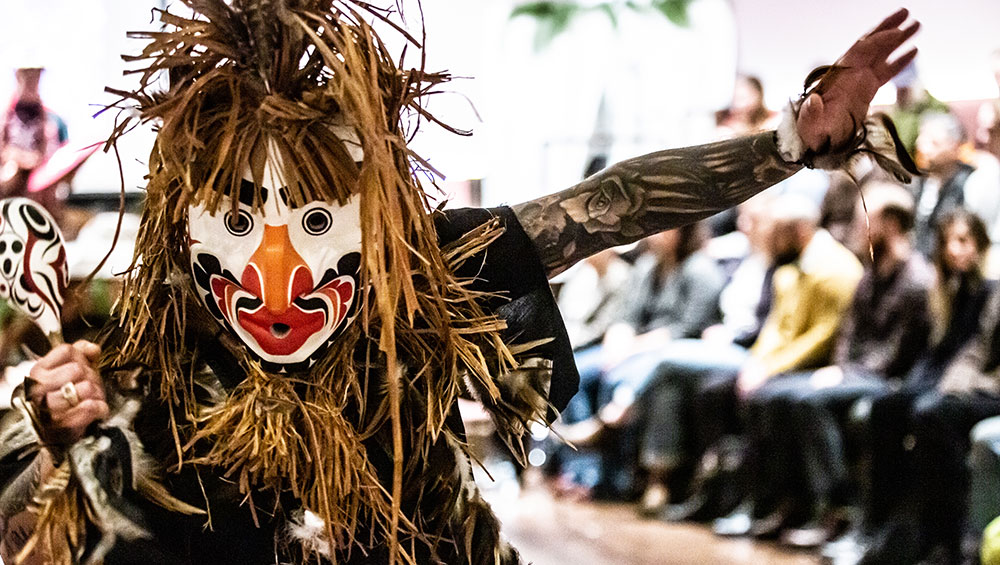 Bringing together the work of 12 contemporary international artists, this exhibition elevates indigenous, pagan and subversive ideas and rituals to offer an alternative vision of what it means to be human and a part of the natural world, in times of ecological crisis. 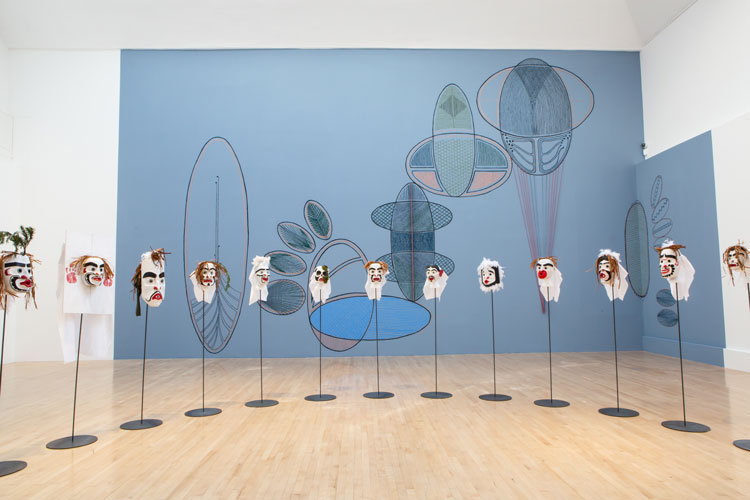 As you walk into Pine’s Eye, there is a group of striking Atlakim Masks (2019) by Kwakwaka’wakw and Tlingit artist and hereditary chief Alan Hunt and the Kwakwaka’wakw community. Suspended on black podiums, the masks seem to be floating in the space. Used at the Atlakim or “Dance of the Forest Spirits” ceremony that opened the exhibition, these masks relate to the artist’s Kwakwaka’wakw heritage and the concept of “potlatch”, meaning “to gift”. Traditionally, at a potlach, the chief gives away his possessions to guests, who reciprocate by listening to and accepting the truths performed as part of the ceremony. In this particular ceremony, we learn the story of a boy who is lost in the forests and is visited by many guiding spirits, who teach him virtues. 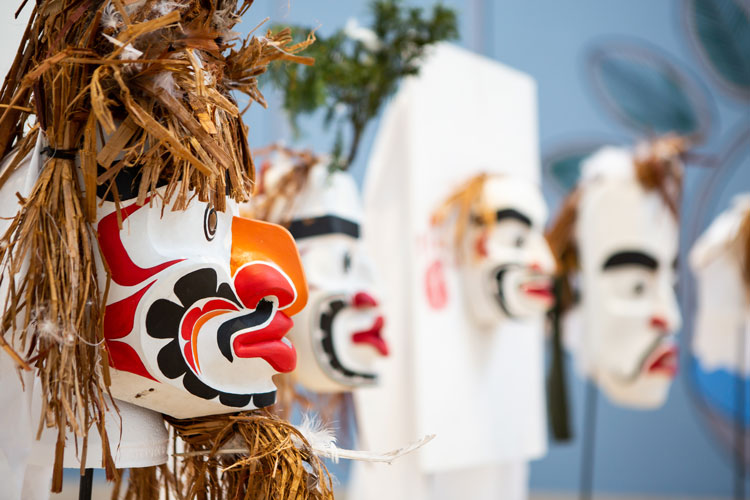 This idea and performance is central to the exhibition as a whole, which is driven by a collective desire to “learn to think ecologically”, says the curator, James Clegg, and to dismantle colonialist assumptions and patterns, and to emphasise the often desecrated rituals, wisdom and imagination of indigenous cultures. Taking its title from Pinocchio, the Italian word for “pine eye” or “kernel”, the exhibition is concerned with the fairtytale’s strange wisdom and folklore, and the mischievous, subversive character at its centre.

Interweaving metaphors for human-object relationships, anthropomorphic animals, spirits, enchanted woodlands and moralistic reflections on industry and greed, Pine’s Eye creates a world that elevates the imaginative and the original, urging us to think beyond the tired social and political structures we are so used to. Hunt and the other 11 international artists form collective, intuitive responses to the current ecological crisis, drawing on their cultures and histories to perform these stories and truths. Through this timeless magic, Pine’s Eye offers new ways to understand what it means to be human and crucially to be part of humanity, shedding the collective learned behaviours that stand in the way of preservation and environmental perseverance. 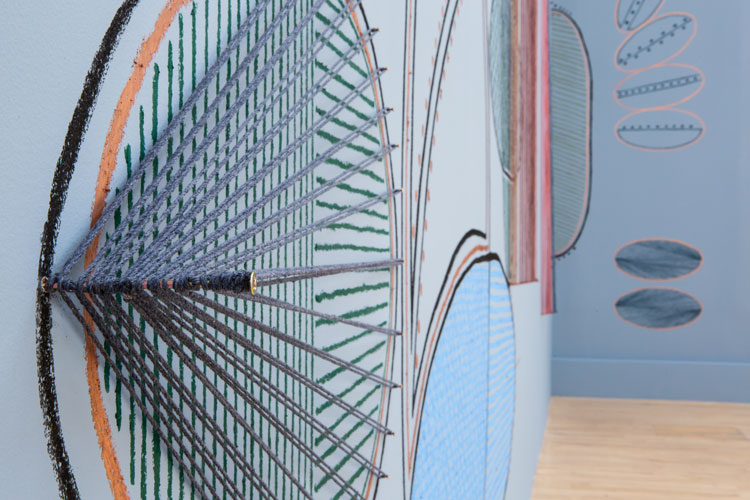 Behind the masks, there is a mural – Resonance – by the Chilean artist Johanna Unzeta. Through its abstract circular, cyclical forms, which invoke the shapes and patterns of nature, as well as indigenous arts and crafts, the mural and her other works on show here, which incorporate textiles and natural materials, explore the forces of colonialisation and industrialisation in South America. To the left of the mural, her works Lantern Wheel A (2017), Lantern Wheel B (2017) and Gemelos/Twins (2017), which are all made from felt, twine and wooden spools, present another dimension to this study. Referencing the Mayan processes of spinning naturally dyed cotton, and the ways in which certain textiles were connected to particular communities and localities, Unzeta presents a resurrection of these links and techniques, which were wiped out by Spanish colonisers. 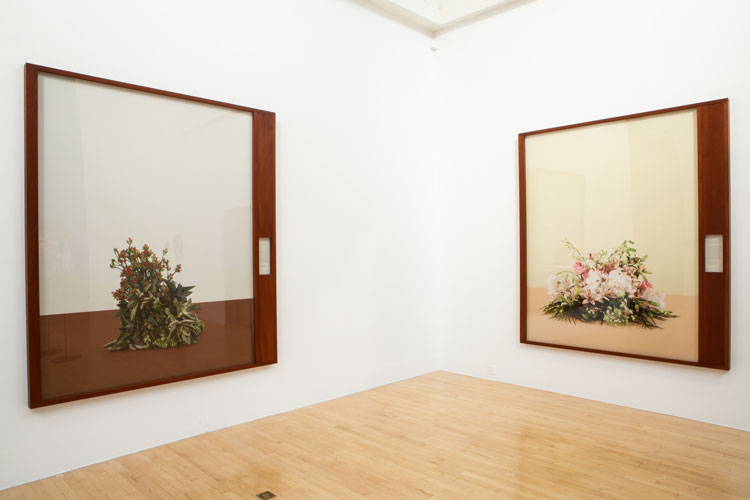 In the same room, there is a display of photographic work by the American artist Taryn Simon. She worked as a botanist for three years, and she explores the symbolic content of the flower arrangements that appear in photographs of the signing of treaties, trade agreements and diplomatic accords. Having reconstructed these flower arrangements in Paperwork and the Will of Capital, Simon casts light on the ways in which states use nature in acts of diplomacy, and how these bouquets subsequently offer a sort of political history in themselves. Her aesthetic evokes Dutch still lifes, and she exposes the unnaturalness of these arrangements, creating new forms of “impossible bouquets”, in which flowers that don’t typically bloom together are presented in one image. 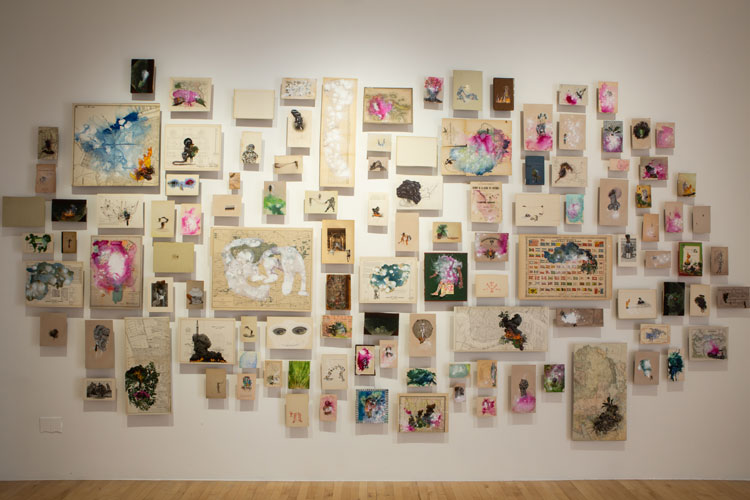 In the next room, there is a large arrangement of collages, I Write Love Poems, Too (The right to non-imperative clarities) – by the Dominican artist Firelei Báez, who now lives in New York. Repurposing pages from history books, she paints over them and writes poems, presenting stories and people who have been erased from these colonialist “histories”. Creating what looks like a sort of constellation, with delicate and magical watercolour in a palette of soft pinks and blues, there is a sense that the artist has transcended the imperialist “truths” and oppression through asserted “knowledge” in a Foucauldian and subversive manner. 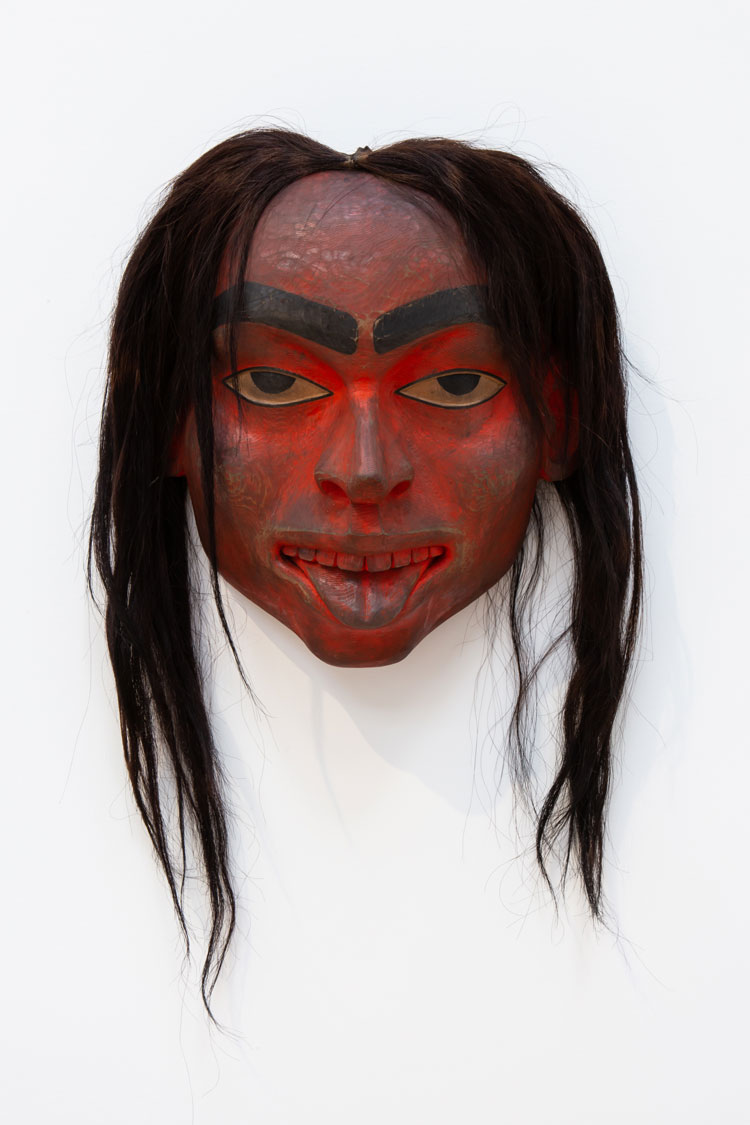 Elsewhere in the exhibition, other displays expand on and complement these ideas and approaches. Beau Dick (1955-2017) was a chief of the Kwakwaka’wakw, and his carvings about the stories important to this indigenous culture’s cosmology are presented here, beautifully complementing the performative masks in Hunt’s work. The French artist Laurent Grasso, meanwhile, takes Renaissance-style images and infuses them with invented historical memories, disrupting our sense of a Eurocentric history and the imperialist practices at their heart, which follow on very well from Báez’s work. In a similar vein, the Cork-based artist Kevin Mooney produces paintings that reinterpret Ireland’s colonial history and its own suppressed cultural heritage. 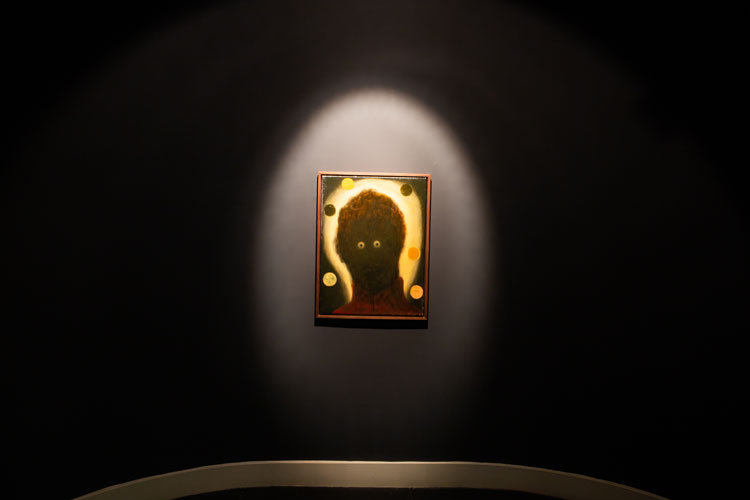 Focusing on pagan rituals and magic, and, in particular, their intrinsic connection to the natural world, the South Korean artist Haegue Yang’s ensemble of sculptures from The Intermediates series are shown on a nonagon-shaped floor graphic. A sound element synthesises the artist’s voice, further fusing concepts of modernity with pagan traditions and folk cultures to disrupt and cast doubt on familiar hierarchies. 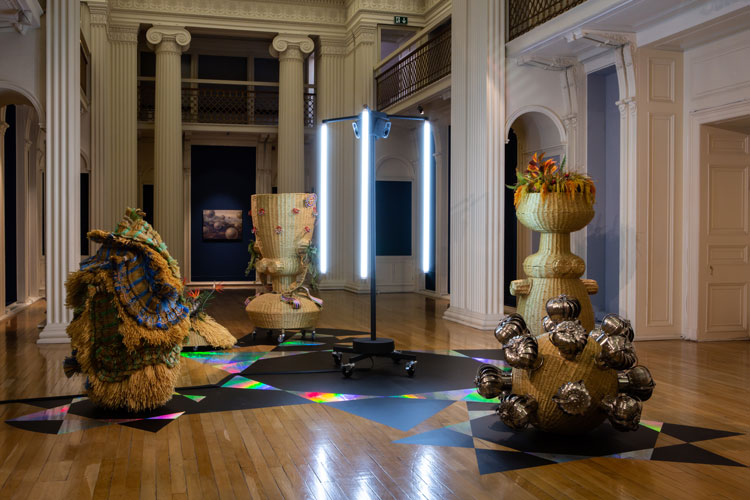 Subverting patriarchial and western-centric ideas of logic and order, the Austrian artist Lois Weinberger explores the unruly nature of weeds in the context of the artificial, contrived garden and wider urban life. In a rebellion against the “logic”’ of gardens, city planning and architecture, his work experiments with allowing fungi and weeds to take over plots of land and urban spaces.

The German-born, Scottish-based artist Torsten Lauschmann creates strange automatons and sound machines using surreal mechanical-digital hybrids, in which walking aids such as crutches and walking frames appear to move around creepily in a blue-lit room. 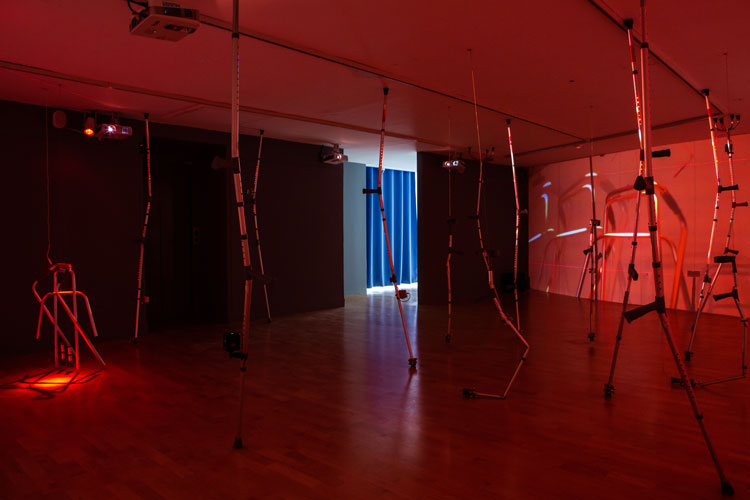 The documentary films of the Puerto Rican artist Beatriz Santiago Muñoz explore how the hallucinogenic and toxic plants of her native island have expanded the mind and also led to tragedy through their anarchic effects on ideas of “reality”. She looks at their role in indigenous magic, and the ways in which Puerto Rico has changed over time due to tourism, fusing patterns of ecology, urban change and the wider international movement and relations in a modern context.

Pine’s Eye explores how changes in perspective and a focus on suppressed stories, cultures and ideas can transform how we think about the world around us, and the spectre of climate change. This exhibition is both magical and wise, offering a holistic and humanist approach to philosophy and art, providing a hopeful and inspiring space. 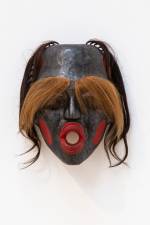