Grief and Grievance: Art and Mourning in America

Grief and Grievance: Art and Mourning in America

Full of the pain of black experience, the works here make the galleries thrum and shimmer with energy, their theme cleverly connected like spiderwebs 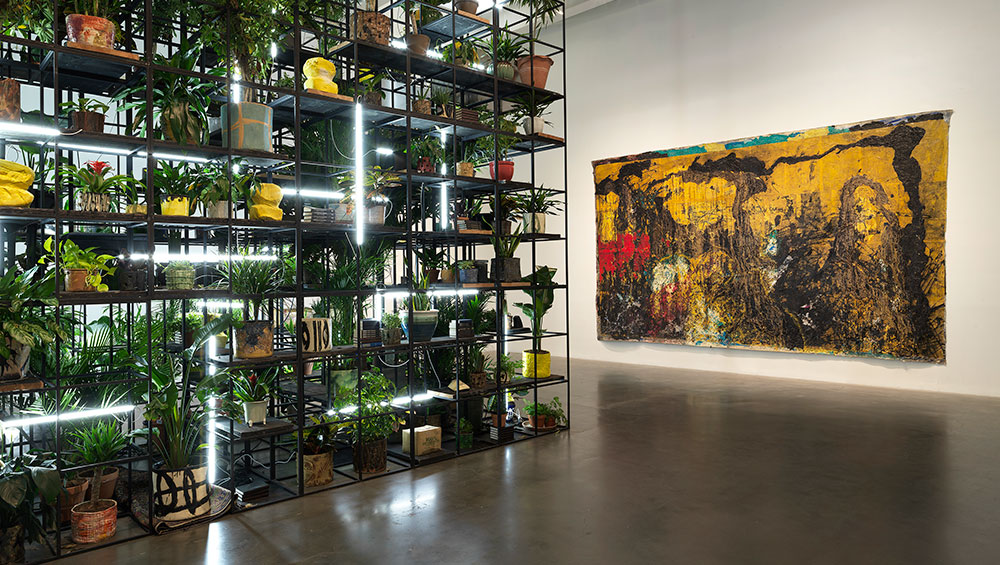 Grief and Grievance: Art and Mourning in America at the New Museum in New York plumbs the deep, dark history of race in the United States. According to Okwui Enwezor, the show’s late, great curator, the show’s eponymous “grief” addresses black American mourning; its “grievance” white anger over disinherited privilege since the official abolition of slavery in 1865. (Enwezor insisted on the historical context of the American civil war by citing Abraham Lincoln’s full Gettysburg Address in the wall text and exhibition catalogue.) Its 37 artists, all of whom work in the US, but were not necessarily born here, channel experiences of race into aesthetic form. Their tools include soul-permeating sound, abstraction’s shifting significations, the brute power of documentary fact and references to the black body made, by turns, immortal, allegorical, iconic, visceral, historical and absent by art. 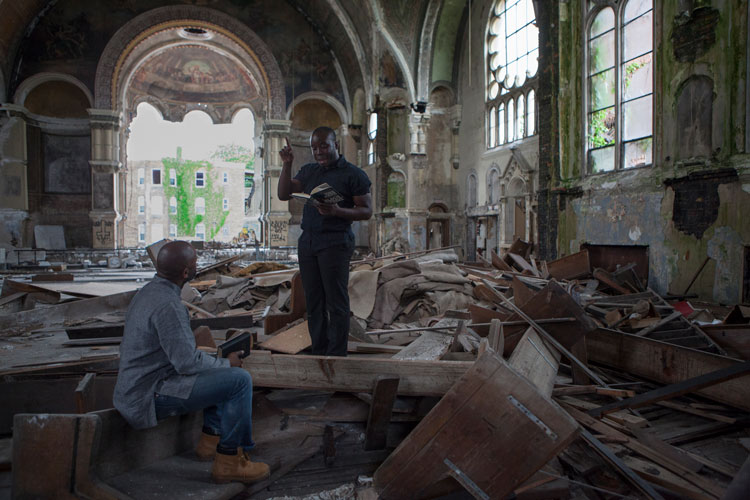 Two years ago, the artworld mourned the loss of Enwezor to cancer; the show was curated by the sure hands of Naomi Beckwith, Glenn Ligon, Mark Nash and Massimiliano Gioni from partial notes he left behind. Enwezor’s lifelong, magisterial effort to tell a worldwide history of art led him to curate the 2002 Documenta, a handful of biennials and triennials, and most recently, with Katy Siegel and Ulrich Wilmes, the monumental Postwar: Art Between the Pacific and the Atlantic 1945-1965, which aimed to undo the New York-Paris binary and reframe art after the second world war as a truly global enterprise. These earlier thematic shows pried open the scope of contemporary or well-trodden narratives. By contrast, Grief and Grievance is highly alert to a significantly narrower band of art pertaining to black mourning. With an already celebrated roster of artists, including Kevin Beasley, Melvin Edwards, Lorna Simpson, Carrie Mae Weems and Jack Whitten, it has all the markings of canon solidification. In this sense, I suspect the exhibition and catalogue will, much like the 1993 Whitney Biennial, have a long afterlife for incisively assembling art that probes identity at an especially urgent historical juncture. The New Museum’s glossy Phaidon tome belies the import of the succinct yet weighty theoretical texts by Saidiya Hartman, Judith Butler and others scattered among its plentiful reproductions. 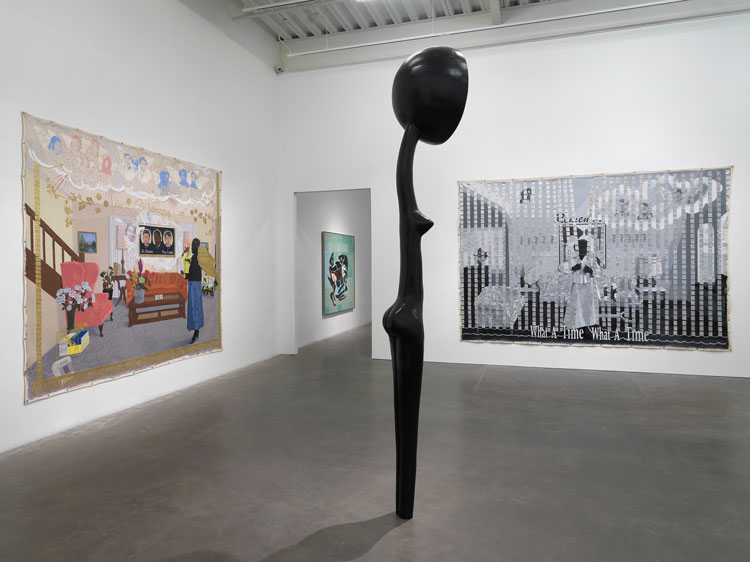 Rarely do the collected works of group exhibitions support the curatorial conceit and transcend it to shine in their own right. Grief and Grievance does that and more. Its galleries thrum and shimmer with energy, this affective bond only strengthened by curatorial choices that resonate thematically and formally. Simone Leigh’s needle-thin Sentinel IV (2020), for instance, punctures the centre of a gallery challenging Euro-American legacies of figuration; it beautifully echoes a small black sculpture nestled within the painted interior that enshrines Kerry James Marshall’s dignified, glitter-winged elder in Souvenir IV (1998), just behind. Paired, these works memorialise black women’s labour and exude female strength. 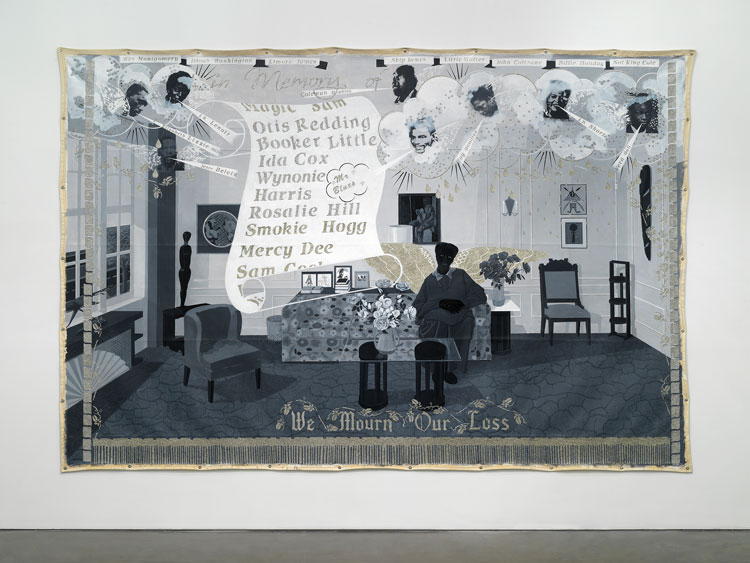 Elsewhere, the striped passages – inside the red circle, or beneath the edict “separate but equal” – of Howardena Pindell’s Autobiography: Water (Ancestors/Middle Passage/Family Ghosts) (1988) complement the star-spangled banners hanging to their left. Each of Hank Willis Thomas’s stars in the banners, collectively titled 14,719 (2019), commemorates a death by gunfire in 2018. Taken together, Pindell and Thomas mount a scathing critique of the violence wrought against black bodies in the US. Connections like these spiderweb, awaiting discovery, throughout the show. 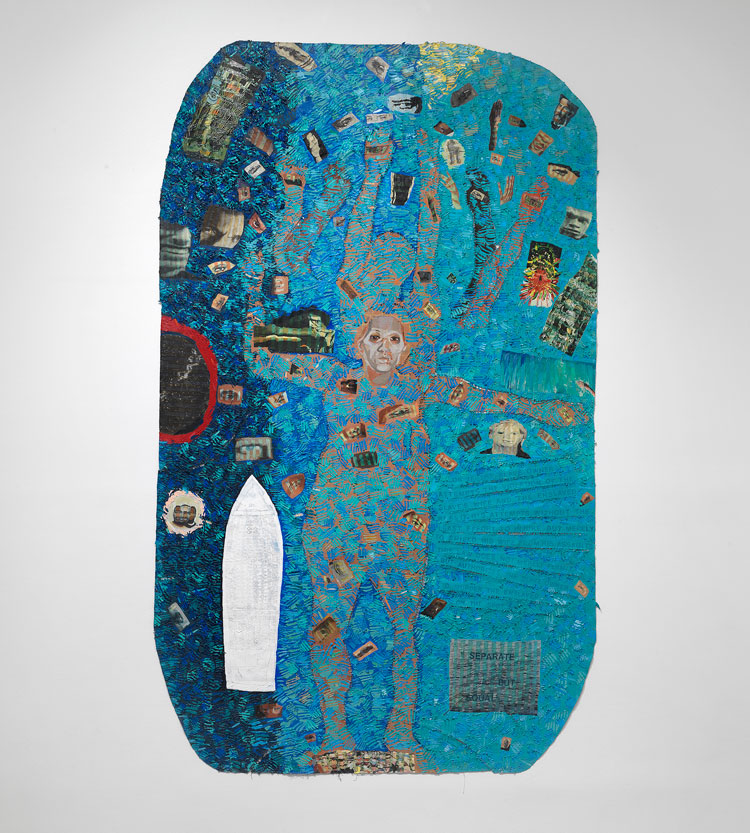 Floor four argues for the efficacy of abstraction. Canvases by Julie Mehretu and Mark Bradford surround Rashid Johnson’s Antoine’s Organ (2016), a towering installation that – raising themes such as black creative history, sensuous experience, musical performance, growth and decomposition – acts like the show’s beating heart. This room-sized armature of black scaffolding is studded with live plants, African American literary tomes and an upright piano. Its conceptual link to Mehretu’s smoothly gestural paintings and Bradford’s scabby canvas is unclear until one reads that their impetus was also the logic of the urban grid, its images strategically recoded with paint. 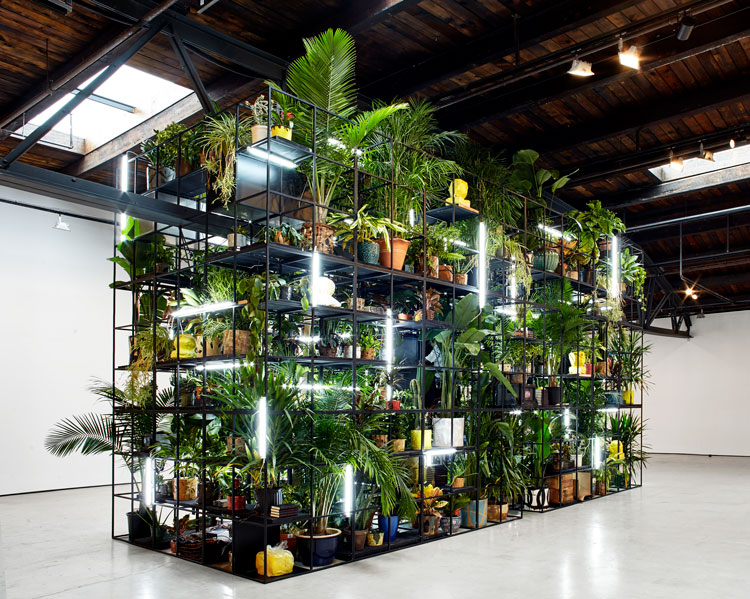 Bradford’s bold-hued Untitled (2020) derives from a 1965 Los Angeles map of the Watts Rebellion site, out of which the artist excised colour-coded crime zones, while Mehretu’s Rubber Gloves (OC) (2018) obscures an image of London’s burning Grenfell Tower through layered screen printing and blurring. Both resist the spectacularisation of black grief through the buildup of paint, exemplifying what Ligon calls “the beauty that abstraction can muster against that wind [of antiblackness]” [catalogue, 177]. In her essay The Condition of Black Life Is One of Mourning, Claudia Rankine suggests otherwise, arguing that it is precisely the lack of visibility of dead black bodies that turns them into an abstraction [catalogue, 18]. 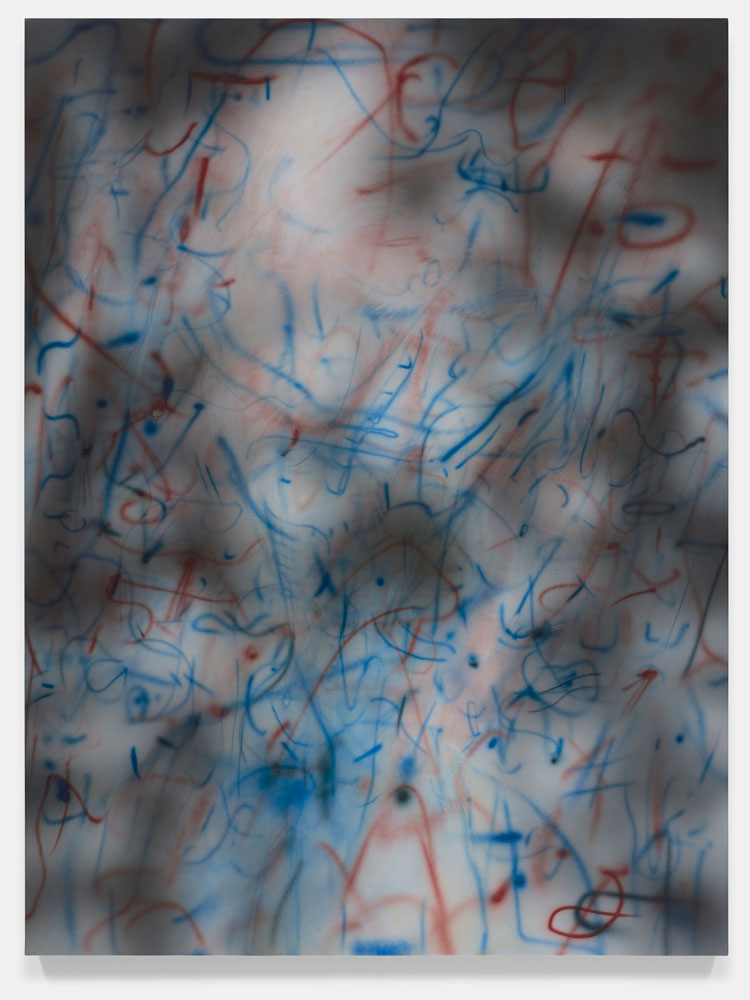 Grief and Grievance soaks the New Museum in sound. Piano notes alongside the elegiac uh-uh, uh-uh of Kahlil Joseph’s single-channel HD video Alice™ (you don’t have to think about it) (2019) lure us like a siren song. A mournful collage of creativity in the making, it transports us to a recording session with singer Alice Smith whose voice, out of sync with the footage, is thus rendered all the more ethereal. We glimpse a mic’s silver mesh, coffee cups, the spark of red fingernails on a drum, a backpack, the performer’s teeth. Just before the recording, Smith lost her grandmother; Joseph his brother Noah Davis. Alice™ is intimate and mesmerising. Do we partake in their sorrow, or are we its voyeurs? In an adjacent gallery, Charles Gaines notates a 1967 speech by Martin Luther King and an essay by James Baldwin by ascribing musical notes to letters of the alphabet. The cacophonous result, projected from speakers and accompanied by graphite drawings of sheet music and a monitor of running text, transposes one means of communication and expression with another. Nearby, a sprawling two-panel painting by Henry Taylor emblazoned with the phrase “EVERY BROTHA HAS A RECORD” word-plays on the role of soul music and incarceration in black grief. 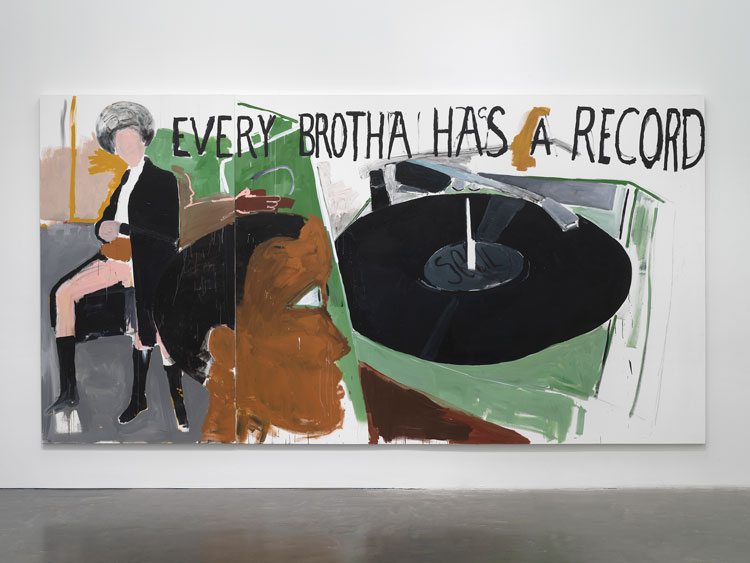 Artworks here play on our senses in other ways, too, a strategy that feels crucial to their affect, that subjective, emotive and interpersonal matrix of associations that we experience in their presence. Sable Elyse Smith’s highly saturated family portraits record the artist’s visits to prisons in which her father has been incarcerated. In each (8345 Nights, 8401 Nights, etc, all 2020), Smith enfolds the photo in wide passages of black suede, its soft texture a sensory marker, perhaps, for moments of physical touch lost between father and daughter. 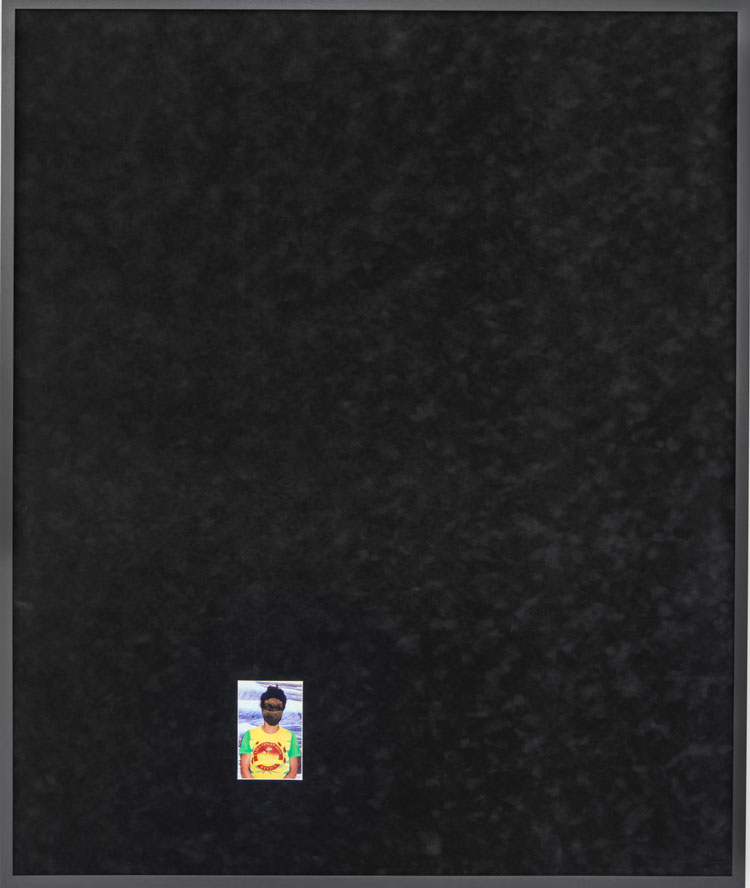 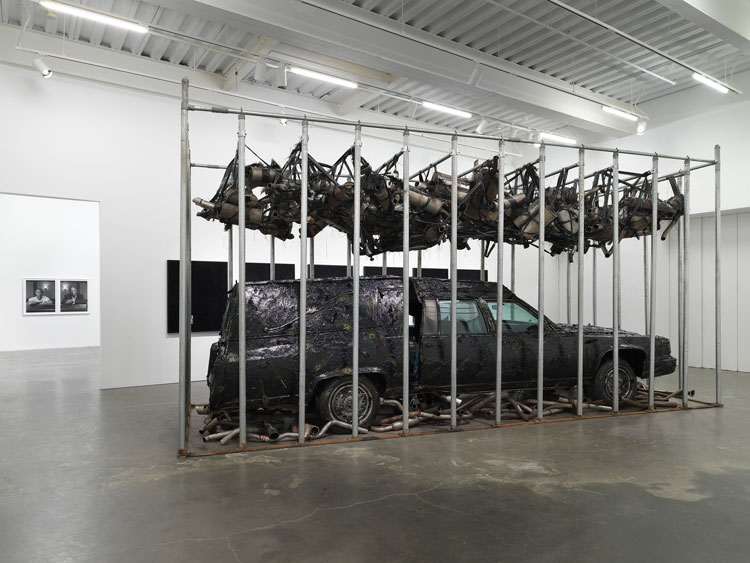 Adjacent works evoke touch as well: note the unlikely peacock feathers stuck to Nari Ward’s tar-smeared hearse, and the impastoed pitch of Daniel LaRue Johnson’s black monochrome assemblage Freedom Now, Number 1, August 13, 1963 – January 14 (1964). In Theaster Gates’s powerful video Gone are the Days of Shelter and Martyr (2014; included in Enwezor’s 2015 Venice Biennale), members of the Black Monks of Mississippi ensemble ceremonially raise and drop doors unhinged from Chicago’s now-demolished Roman Catholic church of St Laurence. The resultant thump is felt somewhere deep in the chest. The gut punch of Julia Phillips’s Drainer (2018) is somatic, too: a ceramic cast of a human stomach and upper thighs bent at the waist hangs from the ceiling by a thin wire, its exterior glazed in matte black, its interior in high-gloss variegations of red and blue. Beneath, an immaculate concrete drain basin awaits its imagined drippings. 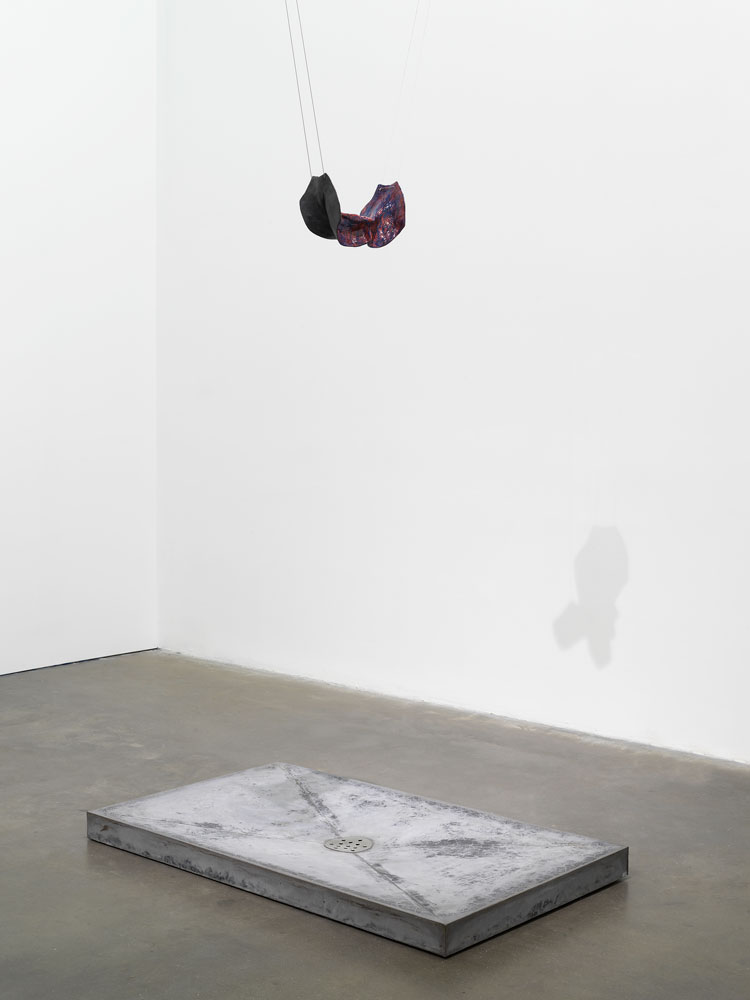 Beckwith’s summation of Enwezor’s preference for art that crystallises or embodies ideas and feelings into form, rather than illustrating them forthrightly, helps us access the physical and psychic pain at the root of the work he nominated for Grief and Grievance. Our felt experiences of the show will, as ever, necessarily be filtered by the positionalities and embodied histories we bring to it – and to some extent, by our differing experiences of America, and of grief. As Hartman writes, potently, in the catalogue: “Our mourning will not wait and cannot be deferred.”