Angelica Mesiti: In the Round

Angelica Mesiti: In the Round

Mesiti skilfully choreographs our experiences, guiding us around the gallery and immersing us in the worlds of bees, trees and ancient music in her evocative sound and video installations 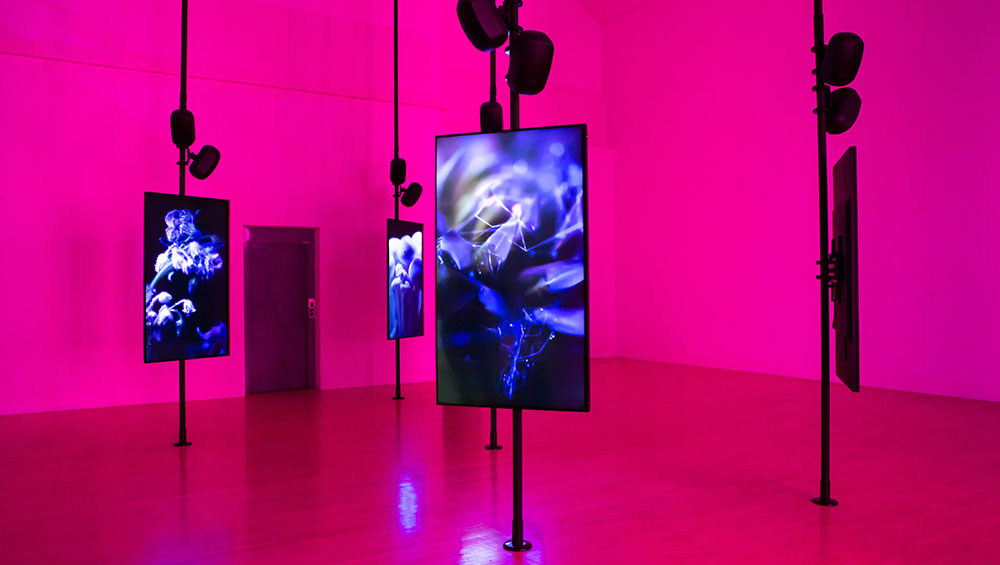 Angelica Mesiti, Over the Air and Underground, 2020. Installation view, Angelica Mesiti: In the Round, Talbot Rice Gallery, University of Edinburgh, 2021. Photo: Sally Jubb.

How often when you visit a gallery are you aware of the artist or curator orchestrating your movements, subtly or strategically, to enhance the whole experience? Of course, colour, scale and materials play their part, but it is usually according to clear chronological or thematic progressions – the intellectual or historical context overriding sensual encounter. But Angelica Mesiti (b1976, Sydney), like the former dancer she is, has done a wonderful job – together with the Talbot Rice Gallery team – of ensuring that the works for In the Round are experienced in harmonious and mutually enriching layers both sonic and visual, choreographing our movements around the works with skill and precision. 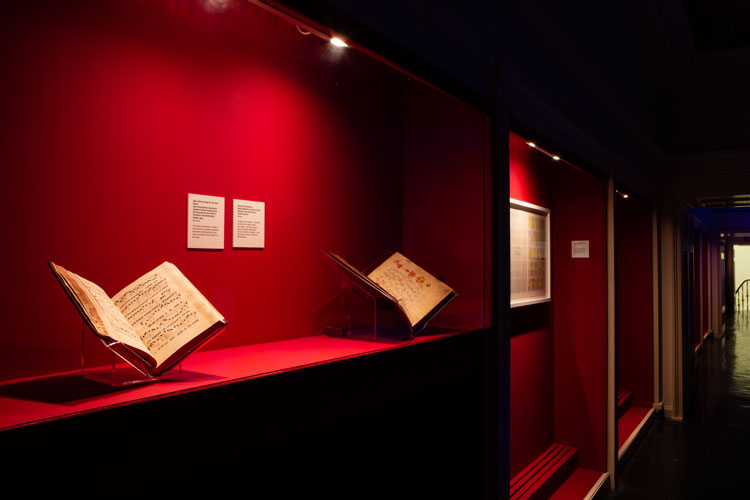 This gallery, part of the University of Edinburgh and set within one of its neo-classical quadrants, has a quirky architecture, part contemporary, part Georgian, that suits this immersive imperative perfectly. Beginning and ending in two large halls, it progresses through much smaller, boxy or circular rooms that are really part of an extended corridor, up stairs and along balconies that overlook the two halls. The cumulative intensity of encountering the works in this sequence and form is such that it is almost like being devoured and then squeezed along the digestive passage of some large, animated architectural organism, emerging shaken and stirred, in an aesthetically, emotionally and sensorily altered state. 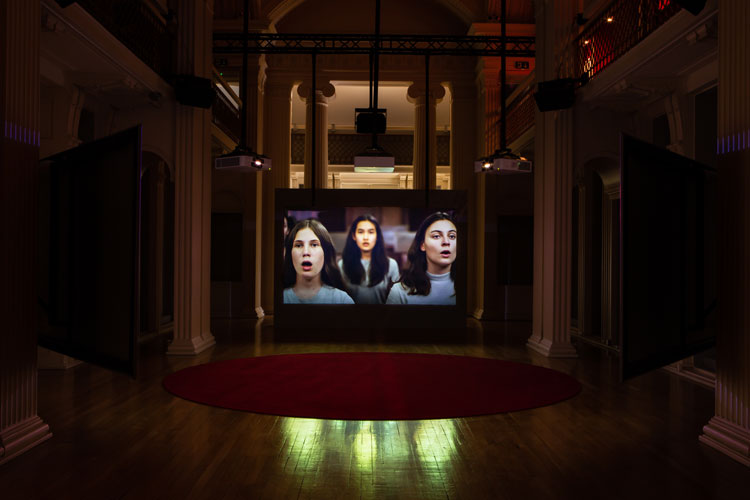 Assembly, Mesiti’s four-screen filmed installation for Australia’s pavilion at the Venice Art Biennale in 2019, used music and movement to explore the power and complexities of collective human endeavour. It was inspired by the 19th-century stenographic device, the Michela, invented by Antonio Michela Zucco. Zucco had hoped it could be used to explore the idea of musical notation as a kind of universal language. Sadly, the “instrument” never achieved its musical potential, but became an administrative aid for recording official parliamentary debates in the Italian senate, where it is still used to this day. Assembly forms the splendid culmination of this Edinburgh show. What Mesiti seems to be doing here is creating a “prequel” for the viewer, arranging her works and objects from the university’s world-class collection (which, because of travel restrictions, she had to delve into digitally) to expand on and enrich the ideas in that film. She has chosen well, in that her choices relate not just to the institution in which the show is set but also to what the world has woken up to in the last two years: primarily, the importance of observing and respecting our precarious relationship with each other and the natural world around us.

Bees and trees play a prominent part. Over the Air and Underground (commissioned for the Busan Biennale in 2020) fills the first, double-height gallery. In a dark room that is tinted fuchsia, thanks to filters over its large windows, five screens are placed at eye level on slim, black stems, and variously rotated to entail movement around and between them. A humming, crackling sound pervades the air, coming from a 10-channel soundtrack of 10 human voices, sounding low and steady at around 220 Hertz, mimicking the frequency at which trees have been measured “communicating” with each other. The work was inspired by the writings of Peter Wohlleben (The Hidden Life of Trees) and Richard Powers (The Overstory), exploring the growing body of scientific research that shows how trees communicate through root structures and growth networks, as well as via airborne particles, which attract and are then dispersed by insects, the most important of which are bees. The world of the bee is what the screens evoke – the five videos show closeups of plants and flowers tinted to highlight any colours within the ultraviolet spectrum through which bees see the world. It is truly a “bee’s-eye view” we are given, with that intention guiding the scale of the images and the height of these screens, and all the better to admire the glistening threads of mycelium which adorn each plant and which Mesiti herself grew in the studio, in celebration of this extraordinary fungal material’s pivotal role in orchestrating the growth and decomposition that fuels nature’s cycles. 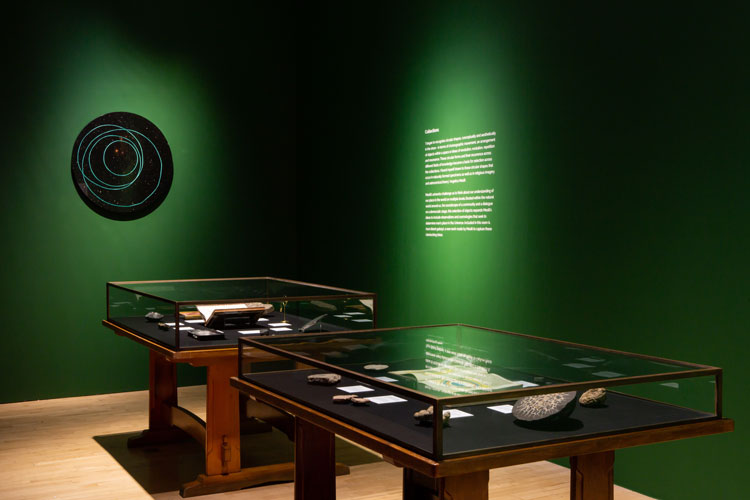 The trees’ humming and crackling accompanies you through the small side gallery beyond this work. Here are two large vitrines containing choice items from the university collection, including dinosaur and whale vertebrae, fossilised raindrops, a calcified bird’s nest, the writings of medieval sages and two precious chunks of meteorite. On an adjacent wall is Hum (Black Galaxy), the first of three small commissions for the show, a sculptural work of bright-green rings etched into gorgeous, polished granite circles. The humming also follows you up the stairs to the White Gallery and forms a pleasing drone backdrop to the Citizens Band work that Mesiti premiered in 2012 at the Australian Centre for Contemporary Art in Melbourne, which commissioned it. 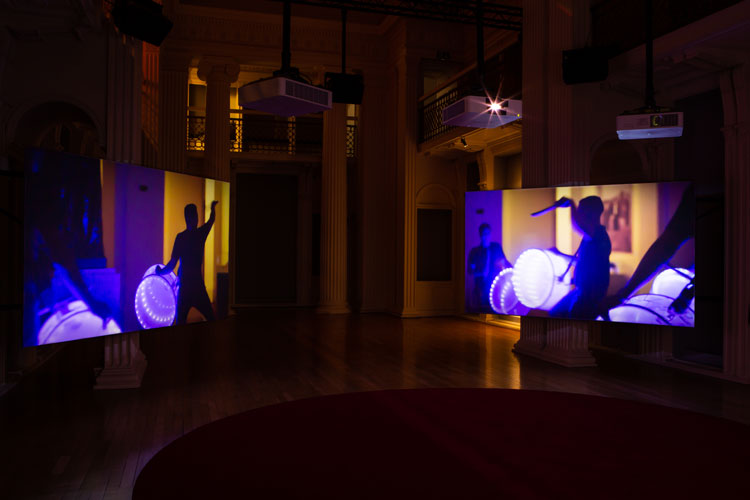 Four screens are placed in the round. Each in turn shows one of four migrant musicians (two from Paris, two from Sydney) performing the music he or she has brought with them from afar, filmed in Mesiti’s trademark simple, documentary style. Mesiti chose the musicians for their skill, and for the incongruity of their transplanted setting. They include Mohammed Lamourie, a partially blind Algerian musician, who sings Rai (a form of Algerian folk) against the bustling backdrop of the Paris metro, where he has found a kind of fame, accompanying himself on a large Casio keyboard, and Bukhchuluun Ganburged, a virtuoso Mongolian overtone singer, who is filmed on his pop-up stool on a Sydney pavement, traffic whizzing past him while he plays a traditional horsehead fiddle. The title Citizens Band comes from the fact that Australia has citizen band radio on which anyone can broadcast without the need for a licence. The piece speaks eloquently of the migrant experience and of the skills and precious pieces of culture that people can bring with them through the embodied form of music. At its conclusion, all four screens come to life, with lights streaming from one to the other in a continuous circle, as if the work wishes to embrace us all within its compassionate and universal gaze. While standing in this room, you can still hear the humming from the bee piece, and it grows louder as you move back towards that first room, along a balcony overlooking the work. Here ancient instruments from the university collection, chosen by Mesiti, are displayed in a showcase along the interior wall. Among them are an English tambourine, a Chinese barrel drum and a Ugandan lyre, their unifying element being their reliance on the resonance of the circular form. 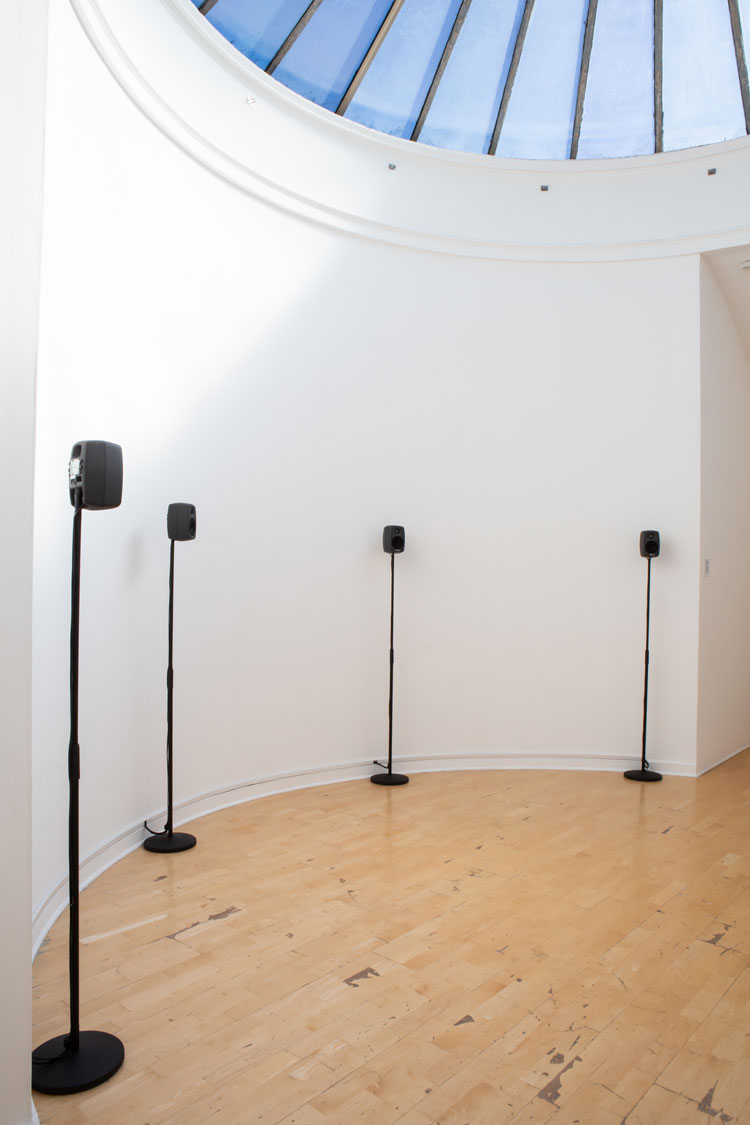 The tree drone then blends nicely into the following work, inspired by a wonderful piece of music Mesiti discovered in the university’s collection, composed by Charles Butler, a 17th-century English music theorist and beekeeper. Called Melissomelos, or Bees’ Madrigal, it attempts to translate the sound that a queen bee makes to call her drones, known as “piping”. Its gentle, mellifluous tones, voiced by four female singers, emerge from four small black speakers placed high around this pretty, skylit, circular room.

It is this sound that then accompanies us along the next upper balcony over the Georgian Gallery in which Assembly is being shown. All along that balcony are showcases presenting more fascinating items chosen from the university collection, of non-verbal notations and representations of music through its rituals, patterns and atmospheres, which resonate on so many levels with the drumming, dancing, harmonising and “assembling” that is going on at various points on the screens below. 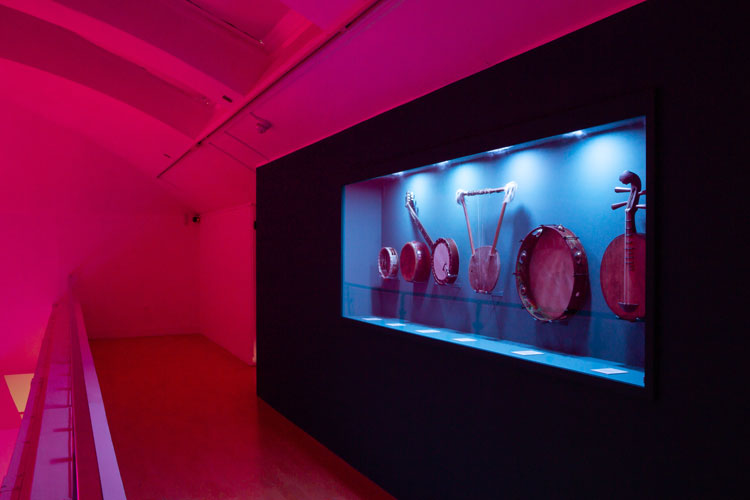 I emailed Mesiti to ask about this powerful, immersive choreography and she replied: “How the viewer experiences the work and their body movements is always an important element to me when making installations, so I was able to expand this notion to consider the viewers’ experience as they traverse the separate works of the show and to make connections between works more ‘plastic’ by linking them through sound.

“When developing the show I thought about the arrangements of work like a score, considering transitions, cross fades, rests, moments of silence and crescendos. This was something I developed as a theory - because it was done offsite during lockdown - so I’m really glad that it’s something that has come through in the experience of the show.” 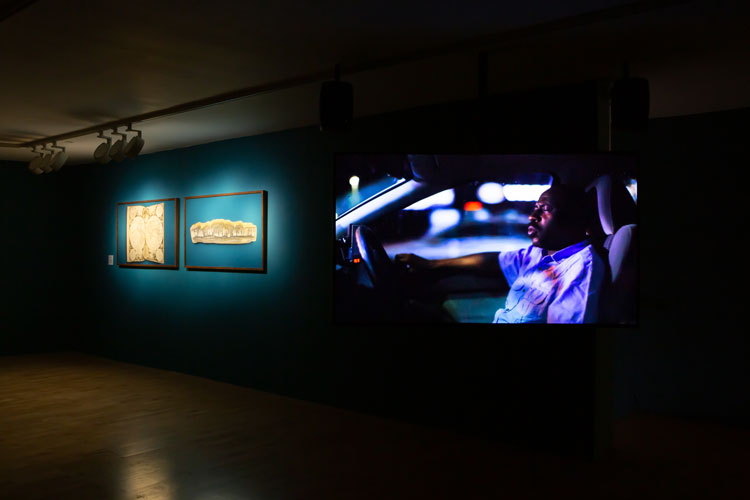 There are obvious reasons why Mesiti, Australian born, of Italian migrant parents, who lives between Paris and Sydney, may have long been fascinated by ideas of translation. But her gift is in evoking not so much what is lost or gained in translation between languages or cultures, between words and music, but in conjuring that liminal space where intentions, emotions and gestures are understood without the need for language or notation.