This retrospective looks at the work of a group of performance artists from St Petersburg in the late 1990s, who used irony, the grotesque and absurdism to reflect the transitional and uncertain world around them 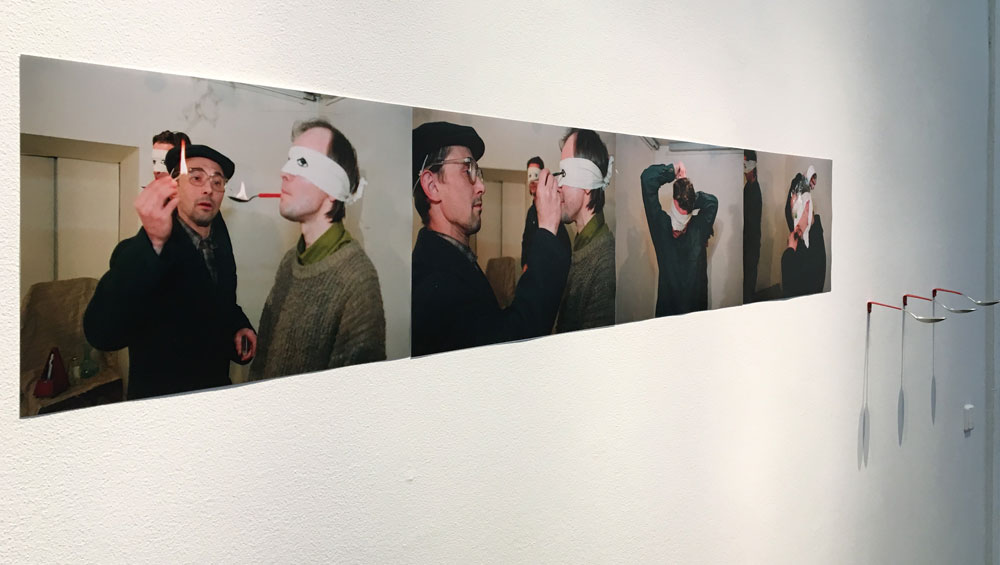 On a recent visit to Moscow, I was pleasantly surprised to find a retrospective of the New Blockheads in the Moscow Museum of Modern Art on Gogolevsky Boulevard. This once marginal group of performance artists from St Petersburg has finally been shown in one of the major Moscow museums. Created in 1996 and dissolved in 2002, the group varied in size from performance to performance, but its core included Vadim Flyagin (b1958), Igor Panin (b1961), Sergey Spirikhin (b1963), Inga Nagel (b1963), Vladimir Kozin (b1953), Maksim Rayskin (b1970), Oleg Khvostov (b1972) and Alexander Lyashko (b1965). Thanks to the efforts of curator Peter Belyi and his assistant Lizaveta Matveeva, the exhibition reveals, for the first time, the vast scope of the New Blockheads’ activities and the deceptive simplicity of their performative aesthetics, expressed in the slogan “Long Live All Creatures!” The show’s catalogue describes this aesthetic variously as “perceptible, sensible” (Belyi), “close to life” (Matveeva), or as “a response to the end of the Soviet era” (curator Viktor Misiano). None of these descriptions is untrue, but none captures the sweeping abandon of the group’s actions conveyed by the exhibition as a whole. Belyi comes close to pinpointing it as “reflection on energetic pulsation of the surrounding world”, meaning that the aesthetic called for a “blockheaded” response to the events from the “real” world, ranging from mimicry to the grotesque. Consisting mostly of documents of the New Blockheads’ performances and activities – photographs, videos, written statements, poems and published journals – as well as objects used in performances, the exhibition resembles a labyrinthine skeleton of a once-powerful creature whose active existence left a profound effect on its habitat. A detailed timeline chronicling the group’s activity counts 110 performances, actions, installations, photo sessions, exhibitions, presentations, plays and publications over the seven years of the group’s existence, with 29 taking place in 1996, its inaugural year.

The first recorded performance of the New Blockheads, Teach Yourself to See, was emblematic of the ironic tone of their actions. It took place on 1 May 1996 at the Borey Gallery (now the Borey Art Centre), a non-commercial art space created in the wake of perestroika to offer exhibition opportunities to marginalised artists. For the performance, three founding members of the group – Panin, Spirikhin and Flyagin – blinded themselves with rags with painted eyes over them and held spoons with flaming paint thinner in their mouths. The performance was inspired by the German philosopher Martin Heidegger’s text What Is Called Thinking, first published in 1954, specifically the first few lines of Lecture 1: “We come to know what it means to think when we ourselves try to think. If the attempt is to be successful, we must be ready to learn thinking. As soon as we allow ourselves to become involved in such learning, we have admitted that we are not yet capable of thinking. Yet man is called the being who can think, and rightly so.”1 The quotation stops short of the sentence “Man is the rational animal,” setting up a certain aporia concerning thinking. As part of this performance, Panin, Spirikhin and Flyagin composed three “leaflets / brochures” entitled Chiromancy of Spots, Secrets of Indian Cuisine, and Manual for Drawing Winter Landscapes. Secrets of Indian Cuisine, recited by Flyagin and printed in the catalogue, is a collection of lines resembling a children’s rhyme in their apparent illogic and subterranean meaning.

Similar to this first announced appearance of the New Blockheads, most of the group’s performances were carefully prepared. Many actions that followed took place, not necessarily in galleries, but on the streets of St Petersburg and its environs, spontaneously at times. For example, on 20 June 1996, Spirikhin, Flyagin and Lyashko, the last of whom was also the group’s photographer, happened to find themselves in the Borey Gallery’s courtyard on a Monday, when the gallery was closed. Spirikhin rolled out a long sheet of white paper across the courtyard, on which he emptied the contents of his pockets, carefully recording every object and every passerby who happened to cross it. Subsequently, the performance was called Pocket Contents and became recorded as the fifth official action of the New Blockheads. In its focus on a mundane and unremarkable everyday occurrence, it recalls performances of the Fluxus artist Alison Knowles, such as The Identical Lunch, for example, but without a score or premeditation. Unlike a Fluxus event, which was inspired by the minimalist aesthetic of John Cage and aimed to make people reflect on the possible significance of mundane things, the New Blockheads’ act was more of an intervention intended to expose the senseless reality of everyday existence. The performance was the result of the fact that the artists could not get into the gallery, because one of them lacked the keys, which he ordinarily had. It stemmed not from a belief in the power of art to change life, but from frustration with a breakdown of a certain support system that was supposed to be working. Consequently, instead of inviting chance onlookers to take part in the event, as Knowles might have done, Spirikhin simply observed passersby stepping over his creation.

Although Pocket Contents was somewhat atypical in its limited scale and spontaneity, the sense of frustrated disappointment it engendered was common to the New Blockheads’ aesthetic, especially when the group addressed current political events in performances done with verve, sarcasm and daring metaphorical clarity. In Laundry Day, created in July 1996 during the bombing of Grozny by Russia, Kozin, Panin, Spirikhin and Flyagin conducted a session in which they washed themselves along with an image of the Russian flag painted over a piece of plastic. They smeared Flyagin’s body with honey, poured broken glass over it and padded it with cotton wool, while giving their dues to Karl Marx during a mock spiritualist séance accompanied by beer drinking. In Slavic Bazaar, Panin served borsch to the audience by spilling it on them and on a table covered with a white tablecloth and set for dinner. Steaming red liquid symbolised the performer’s grief and frustration over the bombing of Kosovo by Nato, which began the day before the performance.

Investigations of national identity were an important part of the group’s program. Slavic Bazaar was part of a series fancifully entitled Central Russian Elevated Blockheadedness, created to explore the idea of national belonging as a form of an “absurd phenomenon” of a “mysterious Russian soul”. The series was unique in the group’s repertoire. It was launched in 1998 and lasted until the New Blockheads’ dissolution, comprising about 40 events overall. One of the first actions in this series was called Discovering the Landscape. It took place during the participants’ trip to the surroundings of the old Konstantinovsky Palace in Strelna, St Petersburg. There, they were “discovering” landscapes and capturing them by means of their craft: performance, photography, land art, painting, or object-making. This activity poked fun at the traditional way of making art by turning it into a Duchampian act of mental production: a “discovery” or “detection” of a landscape was primary, and therefore superior to its actual representation. In Blessed Easter Sunday, another performance involving landscapes, Kozin, Panin and Flyagin parodied the traditional custom of celebrating Easter in nature by stripping stark naked during a meal that took place in a forest, to comment on the ancient religious wisdom that man comes in to this world with nothing and leaves it with nothing.

Created shortly after the provocative performances by the Russian/Ukrainian performance artist Oleg Kulik (b1961) and the Russian-Jewish performance artist Alexander Brener (b1957) at the Interpol Group Exhibition in Stockholm at the beginning of 1996 [in which Brener destroyed a piece of art by another artist in the exhibit and Kulik performed naked as a dog on a leash and bit audience members. Both were arrested for their subversive acts], the New Blockheads became part of a generation of post-perestroika artists who found themselves looking for a new aesthetic language that would reflect the reality of transitional and uncertain world around them. Unlike Kulik’s and Brener’s symbolic attacks against western viewers and artists, the New Blockheads turned to irony, the grotesque, illogic and absurdism as their aesthetic tools of choice, ostensibly borrowing them from a late-1920s / early 1930s avant-garde collective of Russian futurist writers, musicians and artists from Leningrad, OBERIU (Association for Real Art). Unlike OBERIU, the New Blockheads did not work with primarily with literary language, but rather with visual referents, transforming what appeared to be solid things or firm ideological convictions into transitory signs. The group dissolved after several members moved out of St Petersburg for personal reasons. Shortly before its dissolution, Kozin and Flyagin formed The Parasites, an offshoot of the group. The Parasites remain active on the St Petersburg art scene and run under Kozin’s aegis. 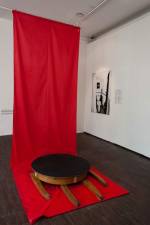