Concerned with the fundamental problem of the location of the body, both on canvas and in the world, the Austrian artist’s self-portraits span genre and interrogate the notion of self-representation and the limitations of painting 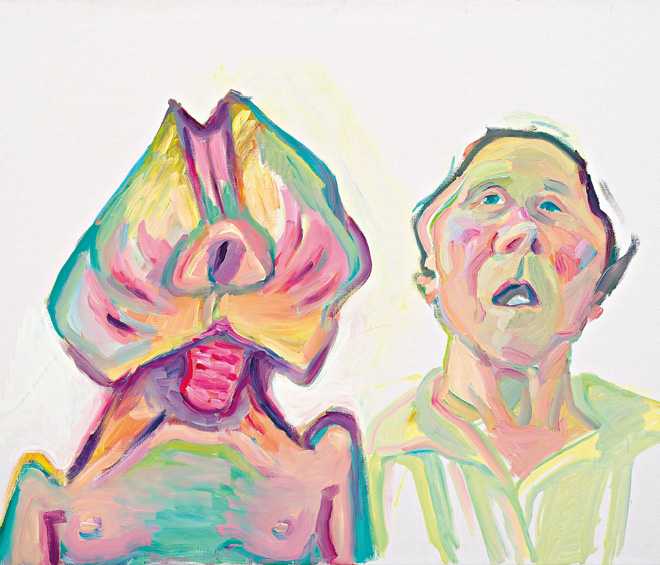 “[The body] is more or less the most difficult subject to paint. Something you don’t actually see”.1

This summer, Tate Liverpool is going all out with (often quite grotesque) paintings of the body, exploring the fundamental problem of its location, both on canvas and in the world, by presenting a double bill of exhibitions of two key figurative artists from the 20th century, Francis Bacon (1909-92) and Maria Lassnig (1919-2014). While the former is a household name, the latter is significantly less well known, despite a career spanning 70 years and time spent in Vienna, Paris and New York. This exhibition of 40 large-scale works, presented thematically and with a well-researched accompanying catalogue, more than measures up to its counterpart across the hallway.

Graduating from the Academy of Fine Arts in Vienna in 1945, Lassnig was already producing work that radically departed from Nazi-approved academic realism. A self-portrait from this year is an early indication of her interrogation of the limitations of painting and self-representation. Depicting herself with her paintbrush in her left hand, when she was actually right-handed, she uses the canvas as a mirror, with her gaze focusing just past the viewer, into space, as she looks back at herself. The curators of the exhibition have designated this work a “statement of intent”, and it certainly reflects the artist’s dedication to the genre of self-portraiture – albeit in a far from traditional sense.

It was not until three years later, in 1948, that Lassnig began to develop her theory of “body-awareness” and the integral commitment to painting the sensations experienced by the body alongside – or even at the expense of – a realistic representation of the body itself, as perceived by others. For Lassnig, the internal space of the body trumped its external forms, and, from very early on, the internal space of her figures became the site of action in her paintings. In the 1950s, following three visits to Paris, she began to experiment with abstraction, reducing the human form to planes and lines. “Foregoing the important physiognomic features of the eyes, nose and mouth, the head was disassembled into spatial components, the coloured planes of ‘absolute grey’ were spread out to become cheek shields, forehead shields and neck cylinders and then placed against the background,” she later wrote of her work of this period.2

In Spacemen in a Cube (1967), Lassnig struggles to fit the body into a confined space – a space within a space or frame within a frame – leaving the outlines of the forms unfilled in. As such, they remain unequivocally 2D, positioned within frames that appear quite 3D, thus reversing the reality of a 3D figure within a 2D frame. This exploration of the concept of representation through the medium of painting remains a pressing concern throughout her career. In the 80s, a series of Inside and Outside the Canvas works shows figures breaking through a canvas painted on a canvas, the artist wrestling her own image out of the material and confronting the limitations of the medium.

The use of colour, lines and brushstrokes in works such as Fat Green (1961) and Figure with Blue Throat (1961) has overtones of Kandinsky, while the smaller canvases with a duller palette in the Body Housing section of the exhibition show the influence of cubism. Most of all, however, Lassnig was inspired by the painterly gesture of abstract expressionism and art informel, with a focus on the connection between artist and canvas during the process of painting, writing in 1951: “The rhythm of painting should be like that of breathing when life is in the act of choking us.”

Developing her notion of “body-awareness”, Lassnig began a series of self-portraits as armchairs, whereby the furniture became anthropomorphised and her body took on its hard-edged qualities, focusing on how specific parts might feel, pressed against the wood or upholstery. She later explained that she only ever abandoned this commitment to her internal sensations when “events in the outside world were stronger than me”. Thus, for example, the early 90s saw a series of works in response to the first Gulf war, as mediated through television, whereby: “The tragic feeling and dread fade after a few days because all you see is equipment and a rather cold-blooded looking man”.3 In an attempt to counteract this desensitisation, Lassnig made paintings conjoining her own self-portrait with symbols of war and death.

This preoccupation with technology and the notion of the post-human and science fiction, of bodies metamorphosing into objects, brings to mind considerations on the human and nonhuman prefigured in Sigmund Freud’s text Civilisation and its Discontents, which, as early as 1930, contemplates the relationship of the body to technology and of natural organs to artificial prostheses.4 Critical, and with a sense of unease, Lassnig’s Lady with Brain (c1990), whereby the brain is displaced from the body, and Small Science Fiction Self-Portrait (1995), with its ultra-contemporary virtual reality headset, comment on the human condition in a disturbing and prescient manner.

In 1968, Lassnig moved to New York, where she changed her style to respond to American realism – albeit in a mocking fashion. Her figures began to look more like external representations of the body, but, simultaneously, they began to appear in duplicate – even triplicate – and she increased still further her use of the trope of canvases within canvases. In Self-Portrait with Stick (1971), for example, a pair of hands reach out from a canvas within the canvas (depicting the outline of Lassnig’s mother) to rest on the shoulders of Lassnig herself, in the main canvas frame, holding a stick, which might be interpreted either as broken, or as piercing her body, again transgressing boundaries of 2D and 3D, reality and imagination.

Perhaps the work that most sums up Lassnig’s oeuvre is Double Self-Portrait with Camera (1974). Having perennially derided artists working with photography as “prosthesis artists”, saying: “I will never understand how artists can be satisfied with manipulating (enlarging, cutting out, blurring, exaggerating) pictures they haven’t made themselves, or that a machine has made”5 and “The camera does almost all the work, no? You press a button, and half of the picture is already there”,6 she depicts herself here, head deformed into the concertina of a box Brownie camera, sitting in front of a canvas with a painting of herself, wearing a sweatshirt on which the writing is reversed in the mirror, holding up a 16mm Bolex film camera. As with her other technology works, it seems Lassnig is railing against the takeover of machines, questioning who can see what and through what lens. What is more real? An image that reflects external appearances or one that captures feelings? An image that reads from left to right, or the mirror image, without inversion?

The final section of the exhibition concerns illness and death: the frailty of the body; the fragility of life; the ageing process; the passing of time; existential concerns and carnal reality, reflecting the sentiment, attributed to Kafka, in Lassnig’s 1980 text on the theory of body-awareness, that “the only reality is pain”. Paintings mourning the death of her mother offer a tender lament, showing the artist lying beside the corpse, as she earlier did beside the canvas, in a foetal position, gently touching the deceased’s eyes and cheek. Self-Portrait with Brush (2010-13) is Lassnig’s final self-portrait – finished one year before her death – a sparse canvas, on which her head is positioned centrally, alongside the outline of her arm and paintbrush – again in her left hand. The style is observational and expressionistic, like in Expressive Self-Portrait (1945), as if she has come full circle. Did she perhaps know this would be her last?