St Petersburg’s New Museum of Contemporary Art is tucked in among a row of low-rise shops and cafes on the 6th Line on Vasilievsky Island, the city’s central district. Established five years ago by businessman Aslan Chekhoev as a private foundation that is open to the public, the museum has held numerous exhibitions of Russian and late-Soviet-era artists that either stem from, or are affiliated with, Soviet non-conformist and underground art, which forms the basis of the museum’s collection. Its current exhibition of paintings by Ivan Sotnikov (1961-2015) highlights the museum’s bias toward showcasing local artists.

Born and raised in St Petersburg, Sotnikov studied art from a young age. After meeting Timur Novikov, the leader of Leningrad’s unofficial art scene in the late-1970s and early-80s, he began painting works in the style of Mikhail Larionov, a leader of the Russia’s 1920s avant garde. Sotnikov and Novikov were drawn, in particular, to Larionov’s primitivising folk paintings, whose subjects included nude women and soldiers. In fact, one of the first paintings at this exhibition is a Venus Sotnikov painted after Larionov sometime in the mid-80s and dated 1912 with a question mark in parentheses. A casual visitor might be fooled for a moment: what is Larionov’s painting doing in Sotnikov’s exhibition? The apparent prank was actually an integral part of a well-intended and legitimate work of art. This joke-laden, happy-go-lucky attitude towards the world became a hallmark of Sotnikov’s art.

Sotnikov’s career began in the early-80s, when he founded, along with Novikov, the New Artists (Novye Khudozhniki) group. The springboard for the group’s foundation was the now proverbial creation of a “zero object” during the exhibition of the Society of Experimental Pictorial Arts (Tovarishchestvo eksperimental’nogo izobrazitel’nogo iskusstva) in the Kirov Palace of Culture in December 1982. In the spirit of Dada and the absurd, Sotnikov and Novikov declared а rectangular cutout within an exhibition panel to be a work of art, a “zero object,” describing it as “a product of a pure creative act for which its authors did not exert any effort apart from their wish to create such an object”.1 In their statement, the artists made a point of linking their creation to the history of art and the spirit of the avant garde: “The zero object is nothing in the direct sense, but is perceptible because it is exhibited within the confines of a wall similar to its neighbour, traditional painting.”

Ekaterina Andreeva, curator of Sotnikov’s exhibition and historian of the New Artists group, observed that, for Sotnikov and Novikov, zero object was a way toward the avant garde’s zaum or beyond-sense language, akin to Kazimir Malevich’s “the zero degree” of form, which could be used as a clean slate for experiment and creation of new art.2

Judging by the exhibition, for Sotnikov, the clean slate meant adopting simplified and crude vocabulary of folk art not only because he wanted to reflect the taste of ordinary people, but also because Larionov, Natalia Goncharova and other early 20th-century Russian avant-gardists brought folk and religious art form from the so-called “low” into the domain of high art. The artist accepted and maintained this emphatically simple style, bared down to basic, logo-like forms, traditional materials and a harmonious palette throughout his career, varying only his subjects, but also in a limited way. The subjects are largely confined to nudes, cars, planes, fir trees, fishes, flowers and landscapes. A visitor to the exhibition has the impression of being immersed in the world of a gifted and cheerful child who can’t stop being fascinated by the richness and magnificence of the world around him.

Sotnikov’s early works, from the 80s and 90s, are installed on the museum’s first floor. Here, we see several nudes painted on supports of varying kinds and shapes, followed by cars, fir trees, fishes and cityscapes. The limited range of subjects allows the artist to experiment with colour, composition and mood created by the colour scheme and forceful graphic elements. There is a great variety of fir trees, for example, loved in Russia because of their natural abundance and association with Christmas. Sotnikov’s trees are what you would expect to see in children’s drawings: frontal, large, pyramidal; with the spikes of branches cascading from the narrow top towards the wide bottom. Sotnikov’s talent makes these trees appear forbidding or enchanting, threatening or joyful. Sometimes the trees stand singular and regal, taking up the entire painting; sometimes they are bunched up in a forest, but in all cases they display their distinct and strong characters, defined by the artist’s mood and his skill with the brush. One fir tree painting is distinguished from the rest by its size and its subject matter, which is an action and not a simple representation of an object or a scene. Called I Brought You a Christmas Tree, it shows a green room with a table in place of a ceiling and three characters: a man opening a doorway, a red Christmas tree tucked in a corner, and a huge pink creature with a mouth, two legs and a top exploding in spikes. The action takes place between the man and the pink creature, from whose mouth spill the words that form the title of the work. The man seems to be taken aback by the creature’s sheer size, because, reduced to a simple black silhouette, he is almost squeezed out of the room by the giant. After some reflection, we realise that the exuberant monster must be the man’s alter ego, because it doubles not only the man, but also his shadow.

According to Andreeva, Sotnikov stood out among the group because of his kindness and joyful attitude towards the world. In 1996, he was ordained as a Russian Orthodox priest and from the late 90s served in a parish in the village of Rogavka situated between Novgorod and St Petersburg. Despite his new calling, he continued to paint; the works from the latter part of his career are as naive, open and inventive as those that marked his secular life, showing virtually no sign of his religious occupation. When the artist became terminally ill, subjects of death and sickness entered his work, but the lighthearted spirit of joyfulness remained intact. In Name the Benadryl, painted in 2015, the last year of his life, Sotnikov asks the viewer to find Benadryl among many pills he attached to its surface. Perhaps this work is the best monument to the artist’s indomitable spirit, filled with humour and with no trace of didacticism or morbidity. 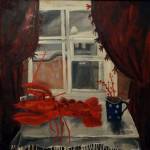