David Lynch's productions are guided by the theme of metamorphosis. Beginning with his early works, the characters in Lynch's films are undergoing some sort of transformation. The theme was evident in Lynch's early films, for example, a human who is barely considered to be “human” as his body is deformed in The Elephant Man (1980), and a baby whose shape does not resemble a recently born child in Lynch's first feature film, Eraserhead (1977). In later films, a man becomes another man in The Lost Highway (1997); a woman becomes another woman in The Lost Highway and Mulholland Dr. (2001); and an actress becomes her character, who becomes the true person that inspired her creation, and then becomes the actress again in Lynch's latest film, Inland Empire (2006). Clearly, David Lynch attempts to transform the world for his characters and for viewers of his works.

Lynch's life seems to be a series of transformations as well. Lynch paints. Lynch photographs. Lynch draws. Lynch creates objects. A collection of paintings, drawings, photographs and sculptures has been rounded up for The Air is on Fire, on view from 3 March until 27 May 2007 at Fondation Cartier pour l'art contemporain in Paris. As a whole, the show creates a portrait of the artist's obsession with the possibilities of transformation (the title "filmmaker" appears to be no longer enough for him).

The exhibition grew out of an invitation from Fondation Cartier's director, Hervé Chandès, who spent months visiting Lynch in Los Angeles, California. Chandès searched the artist's personal archives and found, for example, the more than 500 drawings that open the show. In the first room, the walls are covered with Lynch's "interferences." These drawings are transformations of the world as we know it: drawings appear on napkins, matchbooks, notebook pages, newspapers and screenplay front covers (a pencil-drawn whale on the first episode text of Twin Peaks, for example).

The drawings were done by turns - and sometimes simultaneously - in ballpoint pen, marker, crayon and watercolour. In all of the exhibited works, deformation, or the creation of forms from other forms, plays a role, even if occasionally Lynch tries to be fully Abstractionist. In fact, all of his drawings are abstractions. They show faces as much as they show lines, circles and other geometric forms. And as there are many allusions to his films in them, the drawings could be called rehearsals. For instance, on a notebook page Lynch wrote, Wild at… followed by a drawn heart, an image obviously connected to the title of his 1990 Cannes award-winning picture, Wild At Heart. In the same room, some drawings refer to Blue Velvet (1986), certainly Lynch's most famous film. Later in the exhibit, at basement level of the Fondation Cartier, there is a large crayon panel of a creature that looks very much like the Eraserhead baby.

While the theme of transformation runs through the entire show, it is most vigorously pursued in the "Bob" series of paintings, which are installed in the second room of the exhibition space. Here, Lynch demonstrates his desire to create a distorted universe. Bob is a character who appears on a series of large-scale paintings. In an interview, Lynch stated that Bob has no relation to one of his most famous characters, the Bob from the Twin Peaks television series. But the Bob of the paintings appears in situations very much like those experienced by the character in the show. Strange things happen to Bob just as if they were very ordinary and very normal. "Do You Want to Know What I Really Think?" (2003), asks the title of one of the strongest paintings of the series, in which the character, who holds a knife, puts this very question to a woman. She answers, not surprisingly, "No." The humour in this piece is darkly funny.

Dark humour permeates Lynch's works, but this particular image is also a question of form and formation. Bob has a deformed human body, just like the body of the main character in The Elephant Man, John Merrick. In the 19th century, Merrick was born with severe deformities, notably an oversized head and an abnormally grown leg that provided his nickname. Bob is not so deformed but his body, realised in oil and encaustics, provokes the same shock that Merrick's caused. Even if Bob wears regular clothes (Lynch used a pair of real faded jeans and an actual blouse on the screen) and has a real knife in his hand, he is a transformed being, a result of the Lynch's skilful manipulation.

Another of Bob's adventures, "Bob Finds Himself in a World For Which He Has No Understanding" (2000), is strongly related to Lynch's filmed universe and the idea of artificiality. The long and screenplay-like title of the work is painted on the dark skies of the image. Moreover, two different, large, squared screens, posed side by side, create a dramatic, cinematic-size image. The left and the right limits of the picture are protected by a curtain, just as if it had been opened for a film exhibition. Here also, the character is distorted: he walks in a forest-like environment in which the trees, in Lynch's "assemblage" grammar, are real pieces of branches that interact with doll heads. In this setting, Bob is lost.

Circled by the small drawings (never larger than an A4 page) in the first room, a collection of twelve large (168cm x 168cm squares or more than 1m x more than 2m rectangles) pictures with very dark backgrounds are related to one theme: houses. Lynch created all of them with the same mechanics of deformation seen in the Bob series. Lynch paints himself as a very long-legged boy in "That's Me in Front of My House" (1988). The legs are lines of oil ink and encaustics emerging from the surface as a relief; and the descriptive screenplay text style title is written on the screen with standardised letters glued to the surface. The same treatment appears in "Suddenly My House Became a Tree of Sores" (1990), which shows the global scope of Lynch's work. Here, the title also appears in paper-cut, standardised letters that are glued onto the screen. The nontraditional image of the house is mixed, symbiotically, with the dark background.

In films, transformation is about time and identity. The question is always how to create two opposed time realities existing together and defining the characters. For instance, in Mulholland Dr., two realities, one real and another a dream, are placed as if they could both exist at the same time. The juxtaposition was made by the creation of an abstract space called "Club Silencio", where "No hay banda". ("There is not a band. It is only a tape recording," says a character, alluding clearly to René Magritte's "Ceci n'est pas une pipe".) There, two women co-exist, one in the first and one in the second parts of the story.

In Lynch's paintings, drawings, photographs and sculpture, the transformation is about form and object. It is closer to the logic of a cancer: Lynch rejects typical ways of composing the sign as a recognizable thing and creates a kind of chimera of media. The exhibit does include some works in which Lynch emulates traditional painting, for instance a Van Gogh-like self-portrait and some of Dali's clocks. Still, the distortion in these comes from an examination of the traditional played against alternative expressions.

Born in 1946 in Montana, Lynch started to draw in early childhood. In 1965, he enrolled at the Academy of Fine Arts in Philadelphia. Later, he began to paint. His first film, Six Men Getting Sick (1966), dates to this time. This, other short films and his recent animated series (created for his website) are presented in the exhibition on a film theatre specially built at basement level. One of the most memorable moments of the exhibit is the short film Grandmother (1970), which features a boy who sows the soil and grows a tree. This plant gives birth to a grandmother. Moreover, the grandmother frees the boy from his parents. Like Six Men Getting Sick, this film was strongly inspired by Norman McLaren's animation style. Lynch even works with pixilation, one McLaren's most influential techniques. Since his earliest works, then, Lynch's "media chimera" has been a hallmark of his style. After he made Eraserhead, it became the central mechanics of his art.

Lynch composes this aesthetical chimera by working on various different aesthetical axes. Raised in an industrial city, Lynch was profoundly influenced by an industrial semeiology. For instance, the dark tones of the "House" series suggest the colour of chimney soot. The sounds he puts in his films - as one of the axes of the chimera creation process - are industrial sounds. Since Eraserhead, Lynch has been placing together machine and industrial factory noises and tense background music. As visitors walk through the exhibit, speakers continuously play tense, atmospheric music, and they are invited to press buttons on some deformed sculptures. When the buttons are pressed, an industrial noise interferes with the music.

The strongest connection with Lynch's industrial background is the concept of structure itself. Lynch has said that he loves structures. His works are proof of his desire to build from traditional structures, to compose a system of various axes. This is particularly true of his photographs. The photos are exhibited on the basement floor, in an obscured setting and illuminated by lamps placed directly on the works. The photos capture real forms that appear rather as graphic forms. Factories, for example, are abstracted. Lynch shot other objects (telephones, Coca-Cola bottles) for the same type of effect. There are self-portraits, as well: an enigmatic, partially blurred image and a naive mirror photo.

Certainly, the most interesting group of photographs is the "Snowman" series. Quite malleable, the shapes of the figures, clearly human-like, allowed Lynch to create a very peculiar version of the traditionally figurative art of making snowmen. Snowmen melt down. They are snow; they are forms to be manipulated. The snowmen are no longer men.
As they continue through the exhibit, visitors will find another series of photographs, "Distorted Nudes", and an installation-sculpture. The dialogue between these works further amplifies Lynch's vision.

On the other hand, the "installation-sculpture" sums up much of the artist's present aesthetic. One could call it a set design. For this work, which is based on a small (untitled and undated) drawing of a room, Lynch constructed a human-scale room through which visitors can walk and exit through a back door. Behind the room, they will discover the set. It is exactly what they might see on a film set, and similar to that which Lynch shows in Inland Empire, which tells the story of a film being shot.

The sculpture brings together the two sides of David Lynch, the filmmaker and the multimedia visual artist. In it, viewers see an image from a filmed perspective and in person. The traditional and recognisable room is there (a sofa, an armchair, a carpet) but none of the traditional objects has a traditional form. They are all misplaced symbols. 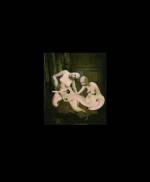 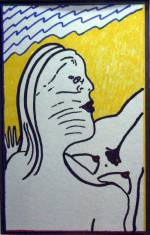