A former director of London’s National Portrait Gallery and the National Gallery, Charles Saumarez Smith takes us to 42 of his favourite museums worldwide, considering how our experience of art is impacted by the buildings that house it 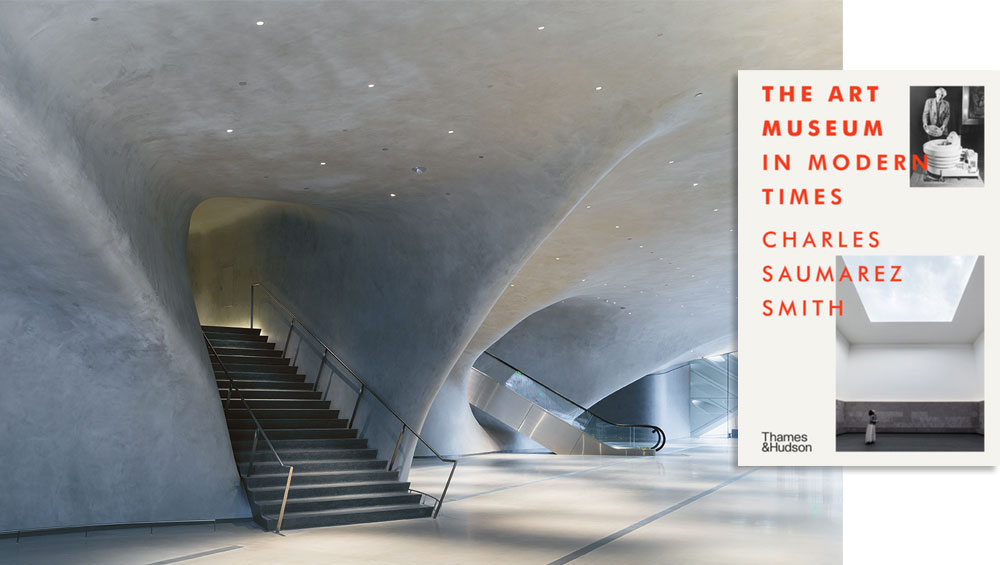 How have art museums changed in the last century? Where are they going in the future? These are the two questions underpinning The Art Museum in Modern Times by Charles Saumarez Smith. Given where we are now with Covid-19, lockdown and museums in Great Britain currently closed to visitors, these are timely questions, although it is clear the author had them in mind long before this pandemic and its effects. Saumarez Smith has a long record of experience at senior levels in museums in London: director of the National Portrait Gallery (1994-2002), director of the National Gallery (2002-2007) and chief executive of the Royal Academy (2007-2018), he certainly has valuable insights to offer.

This book takes the reader on a whirlwind tour of 42 museums across the world, from MoMA in New York, to Tate Modern in London, Denmark’s Louisiana Museum of Modern Art in Humlebæk, the Benesse House Museum on the Japanese island of Naoshima and astounding new museums across the globe. It is a fairly compact publication in relation to the range of material it covers and the five main chapters – The Modern Museum, The Postmodern Museum, Museums for the New Millennium, The Museum Reinvented and Five Key Issues – could probably each be books in their own right. Yet, the ambition of the book in pulling together all this material in a single publication does have the advantage of providing a trajectory and an overview of a great deal of information and ideas, something it does well. It is nicely illustrated and referenced, too. The author’s short preface is helpful and honest about how his selection of case studies is extremely personal, along with the bias that inevitably entails. I appreciate his openness, too, in acknowledging what he learned in the course of writing the book. As he rather eloquently explains: “I recognised, as I wrote the book, the universal decline in belief in a master narrative made manifest through the display of a museum’s permanent collection. In its place is a growing interest in the idea of exploration and the validity of individual response, not as instructed by the authority of the museum; an interest in experiencing single works of art rather than learning about a broader art history, and in treating the museum as an opportunity for private adventure.” 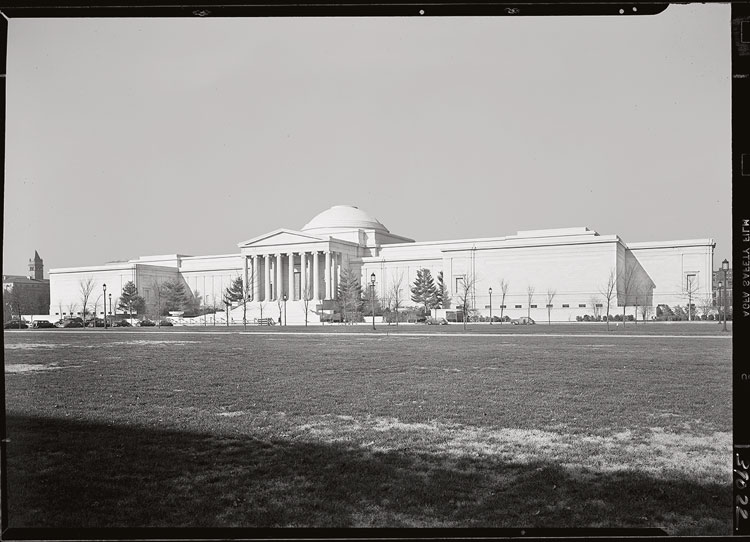 The National Gallery of Art in Washington, DC, as photographed in 1940, before its formal opening in 1941. Photo: Gottscho-Schleisner Collection, Library of Congress, Prints and Photographs Division, Washington DC. Page 23.

The shift he identifies is one that is well known today. No longer viewed as institutions that could and should instruct and educate, museums have become more fluid organisations with a rather different purpose to facilitate contemplation, spectacle and individual experience.

Saumarez Smith trained as an architectural historian and the reader benefits immensely from that in this book as he considers the ways in which our experience of art is profoundly impacted by the museum buildings that house them and how it is organised and displayed within those buildings. The scene is set with the traditional museum, often an elaborate civic building designed in the classical style, for study and research, a place of scholarship rather than public enjoyment. These buildings, he tells his reader, were shrines to a particular kind of moral, intellectual and cultural authority. Yet from the 1930s onwards, the monolithic museum began to change architecturally, as well as in what it could and should be and, as we are told, “a new era of radical public experimentation, interaction and architectural invention had begun”.

The Museum of Modern Art in New York is the book’s starting point. This was one of the first museums to focus on the art of its own time. When it opened in 1939, the building itself, unapologetically modernist, acted as a riposte to what had gone before. Inside, its focus was on the present not the past and, in line with the vision of its first director, Alfred H Barr, its remit extended beyond painting and sculpture to include photography, film, design and more. The network of relationships is as fascinating and informative as anything else here. It is also the people that fascinate at the Louisiana Museum in Humlebæk, just north of Copenhagen. Who would guess that it was the idea of Knut W Jensen, a Danish manufacturer of soft cheese?

In the 50s and 60s, the architects were modernist, too. While Frank Lloyd Wright designed the Guggenheim Museum in New York, which opened to the public in 1959, Carlo Scarpa redesigned the Castelvecchio Museum in Verona, an ancient building that balances old and new since Scarpa’s renovations, completed in 1964.

In New York, Marcel Breuer designed the Whitney Museum, which opened in 1966, and Mies van der Rohe’s ideas took shape in the form of the Neue Nationalgalerie, which opened in Berlin in 1968. The Museu de Arte de São Paulo (MASP), designed by Lina Bo Bardi, is one of the most important museums of the 60s. Bardi wanted to destroy the aura that surrounds museums, displaying works of art in a stripped-down fashion. This was André Malraux’s “Museum without Walls” made manifest.

Ideas about museums shifted again in the 70s when examples such as the Centre Pompidou (completed in 1977) in Paris by Richard Rogers and Renzo Piano and the Sainsbury Centre (1978) in Norwich by Norman Foster introduced wide-open gallery spaces with movable walls, and the new industrial-style museum was born. While the Centre Pompidou featured a large public piazza (historically, the piazza was a place of civitas or meeting and exchange), the Sainsbury Centre is a vast industrial shed, devoid of any historical references.

For the 90s, Saumarez Smith focuses mainly on the Getty Museum in Los Angeles and the Guggenheim Museum in Bilbao, both huge projects completed in 1997. The Getty, with its 16,000 tons of travertine, is situated on a hilltop, separated from everyday life. In Bilbao, the Guggenheim Museum, designed by Frank Gehry, is famed for its architecture as much as its contents. The author touches on earlier examples of the postmodern museum, too – Neue Staatsgalerie, Stuttgart (1984), and the Menil Collection, Houston (1987), to name but two. The emphasis at the Menil was entirely on the quality and intensity of the viewing experience, not on learning.

With the new millennium came new museums. Saumarez Smith’s case studies here include Tate Modern, London (2000), designed by the Swiss architects Herzog and de Meuron, and the Hepworth Wakefield, Yorkshire, and the Turner Contemporary, Margate, both opened in 2011 and designed by David Chipperfield. The Turner Contemporary, a series of low-tech industrial sheds, gives its most prominent space to a classroom, foregrounding the gallery’s responsibility to provide public education. Like the Hepworth Wakefield, it is unostentatious and sits lightly in the surrounding landscape, there not for its own sake, but for the display of art.

Next came dramatic new museums across the globe. Mona (2011) in Hobart, Tasmania, is carved into a rockface and designed for a personal journey through without labels or routes. It seems to be more viscerally experiential than about the experience of individual works. In 2015, the Broad opened in Los Angeles, a monumental building with a white plastic skin that helps to make the experience of its interior a visceral and sensual one.

The Louvre Abu Dhabi (2017) was designed by Jean Nouvel and revives the universal survey museum under its vast domed roof. The most recent development to be addressed in this book is the West Bund Museum, Shanghai, another Chipperfield design, opened in 2019.

Saumarez Smith plays to his strengths in this book, focusing on the architecture of museums, but with good reason. The Art Museum in Modern Times is not only about what is displayed and how, but about where it is displayed and how that is experienced. Saumarez Smith’s case studies demonstrate how museums have changed since the 1930s and why. Understanding this history helps in understanding why museums look like they do now. With that understanding, a richer experience of those museums awaits us.