The vernacular tradition of rural Britain has preoccupied the majority of builders, clients, architects and planning authorities in rural regions for a decade, just as it had seemed that a “kitsch” or gemutlich, approach had been adopted by compliant stakeholders in each category. This apparent easement of a proud tradition had been thoroughly documented in the 1960s, by Dr Bruce Walker and Alexander Fenton in their definitive study, The Rural Architecture of Scotland. It is remarkable how the clearest plotting of such an erudite vein of simple building could go off the map: but such was the case. Only in the first decade of the 21st century were moves made to rectify this serious shortfall.

In rural Scotland, architects Graeme Hutton and David Jamieson (LJRH Architects) were commissioned to design a rural house by an enlightened client (himself in the building trade), who had taken steps to set aside a site in a wholly agricultural setting close to Meigle in Perthshire. This building could be said to be the first piece of rural architecture to have picked up the tradition analysed by Walker and Fenton, absorbed its underlying principles, and to have applied them in a wholly contemporary manner. In the past there have been new buildings in the proximity of earlier farm buildings, but usually there has been little harmony. The fact that the clients were from the locality, made it much easier for the architects to achieve both financial probity and design agreement throughout.

What was required was a three/four bedroom house, with a sewing room in the eaves of one (lower) end of the upper level, and something of a double-height sense of space at the opposite end, with wholly practical dining and cooking arrangements combined at ground level. What is most remarkable is the ease with which finely detailed zinc roof cladding could embrace this totality of spaces, tectonically but without rhetoric: in other words something of the tight marginality of the purpose-built grain store was achieved, at ease with the surrounding landscape, and seemingly of the land. The zinc finish is initially silvery, but weathers down over a few years to a blue-grey tone. The ridge and the eaves are crisply detailed. The pre-existing ancillary block, already taking some overspill from the family’s use of the main house, shares the same roofing profile. The two buildings stand in perfect harmony, and with the surrounding fields of summer-grown cereals and winter plough.

Meigle “Shed”, the Drummond house, forms part of a carefully developed “landform” theory standpoint which comprises four similar projects by Hutton, which are a series of applications by the architect of the principles of “Continuity and Invention”, in recognising the care needed when buildings of differing scale and meaning come to be inserted within a historic, often emblematic, landscape context. Deliberately the “Shed” comes right to the edge of the site and is not fenced off. Seen across the fields, the profile of these structures seems wholly of the land too, even perhaps Virgilian, in finding the poetry in agrarian life: perhaps Meigle is not so far from the Campania, in that longstanding European tradition.

Happy – even too happy are farmers, far from the clash of war,
Who receive an easy livelihood from the just and generous earth.
Although they own no lofty mansion with proud gates.
Virgil, Georgics 2

At Meigle architects and clients have found this secret, this ethos, of an old agrarian tradition, cherished it, and sustained it – by means of modern technology, no less; the building is now celebrated by national (2010) and international awards and recognition. The contemporary architect and philosopher Juhani Pallasmaa himself visited and praised the work in a visit from Finland to Scotland (2010) as representative of a new direction in the retrieval of the vernacular, imbued with something of a phenomenological way of thinking, close to his own preoccupations. 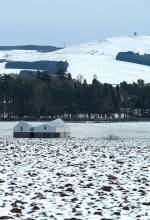 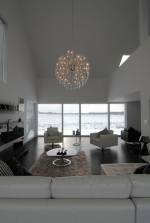 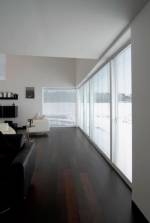 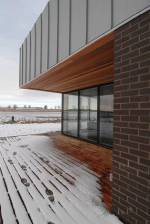 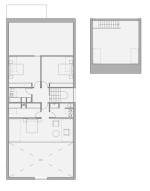 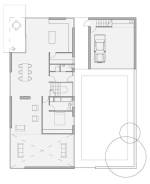