Pioneering and Olympian, a $475m arts centre anchoring the south end of a shiny new enclave on Manhattan’s Lower West Side hopes to reach a broader community with immersive, intuitive and groundbreaking programming. Can emerging art thrive in such weighted space? 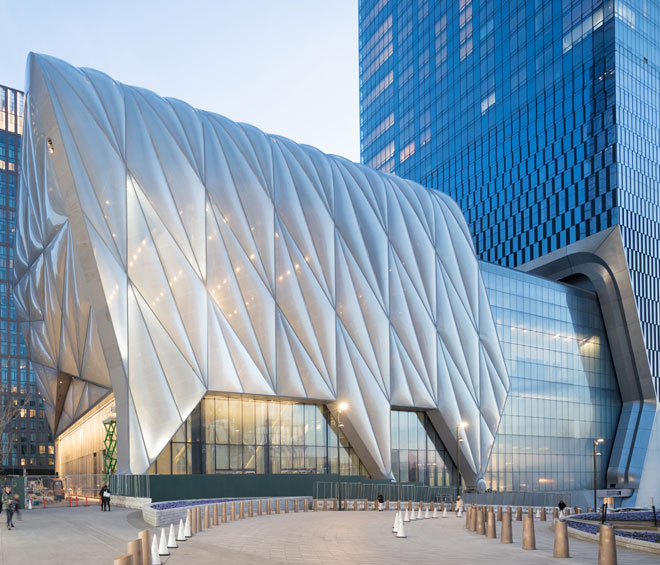 View of the Shed from Hudson Yards / North Elevation. Photo: Iwan Baan. Courtesy of The Shed.

A city already juggling 1,220 cultural institutions would have no need for another, but for the megaproject for living that has consumed Manhattan’s Lower West Side since losing its bid to host the 2012 summer Olympics. The same group that had developed the vertical mall concept at its Time Warner Center in Columbus Circle undertook Hudson Yards to update the formula downtown for millennials seeking an “experiential” lifestyle. Cantilever a 28-acre neighbourhood over the unsightly rail yards, lure the same winning combination of retail and restaurants with discounted rentals, fan them out from a pristine plaza accessed by a specially built subway stop, add luxury offerings on the order of a $800 haircut – and voilà!

Except for the one missing ingredient – culture, in developer parlance the amenity without which lifestyle has no chic. The original plan, an art space incorporated lobby-style into a multi-use building, was nixed by the city, the not-so silent partner without whom no venture could go forward. The then mayor Michael Bloomberg, a fierce supporter of the arts, agreed to green-light the development only in exchange for a fully fleshed out, not-for-profit, performing and visual arts centre. 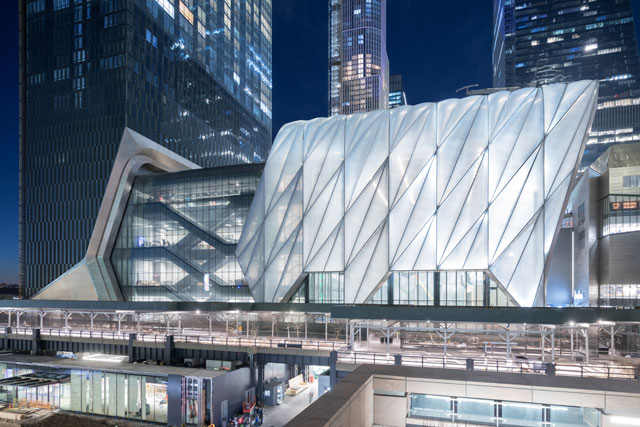 Evening view of The Shed from 30th Street, Manhattan. Photo: Iwan Baan. Courtesy of The Shed.

Enter the Shed, jump-started with $150m (£115m) divided between the taxpayers and Bloomberg Philanthropies and trebled by a clutch of like-minded billionaires, including Diane von Furstenberg, Dasha Zhukova and Kenneth Griffin (fresh off the $238m purchase of a penthouse on Central Park South headlined as the nation’s most expensive–ever private residence).

A generous 18,500sq-metre footprint anchoring the development’s south end was entrusted to the triumvirate of Elizabeth Diller (of Diller Scofidio + Renfro) for the resourceful ingenuity that had made a people’s park of the High Line, given downtown Los Angeles the Broad Museum, and is expanding the Museum of Modern Art; to David Rockwell for the theatrical flair that has animated many a gathering space; and to Alex Poots for the sort of out-of-the-box programming that he had sharpened in Manchester and honed at Manhattan’s Park Avenue Armory.

A massive endeavour climbing the cost to $475m, the Shed is worth the long wait. Every penny is accounted for and every concern addressed. No one will come away unimpressed. Diller’s scheme delivers to the millimetre the flexibility required for the promised immersive, integrative, multidisciplinary, multi-diverse, socially conscious, culturally driven (whew!) art experience. 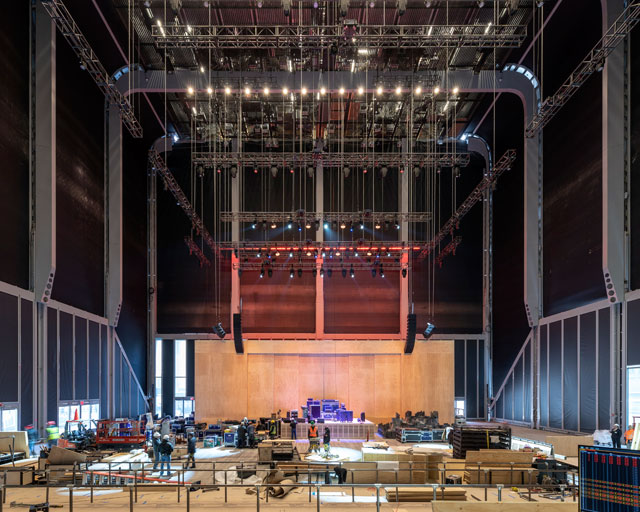 The main performing hall expands to 2,715 sq metres. The intentional wow-factor of its signature, retractable (hopefully hurricane-proof) steel and translucent-polymer shell will open to summer performances staged for up to 3,000 under a starry – if doubtfully windless – night. Access to the five levels is by elevator and more strikingly by twin escalators – a performance piece in themselves as they climb two floors at a time along an angle evoking Khufu’s pyramid. Even the defiantly industrial lobby reads as a performance space, relegating to backdrop the ticket counter and chef-powered, everything-under-$18 snack bar. Look up and see the High Line’s underbelly; look out and see its new exhibition plinth, inaugurated with Brick House, Brooklyn artist Simone Leigh’s 16ft-tall bronze architectural sculpture that addresses long-suppressed black female labour.

The centre’s overarching brief, as breathlessly presented at the preview, is to offer art a new narrative, artists a safe place to innovate and audiences an experience of creativity-now. Every production will be, for the most part, commissioned or developed on-site and each, whether scaled to solo show or diorama, will be encouraged to challenge, confound or amaze. This won’t be art that you shop for, art that intimidates, or, if Poots has his way, art issued from the western canon. His “risk-taking” pledge to replace stereotyped notions of high art/low art, secular/religious, male/female, with identity-fluid, novel programming augurs well. The inaugural season presents a conflation of Marilyn Monroe and Helen of Troy; a rousing sound piece conceived to hear three centuries of African-American history, a monologue in prose verse by Canadian poet Anne Carson, and an elaborate composition orchestrated by Steve Reich with extant work by Arvo Pärt to morph into atoms, by a digitally coordinated repetition of divisions and repeats, a sequence of Gerhard Richter’s new linear wall pieces. 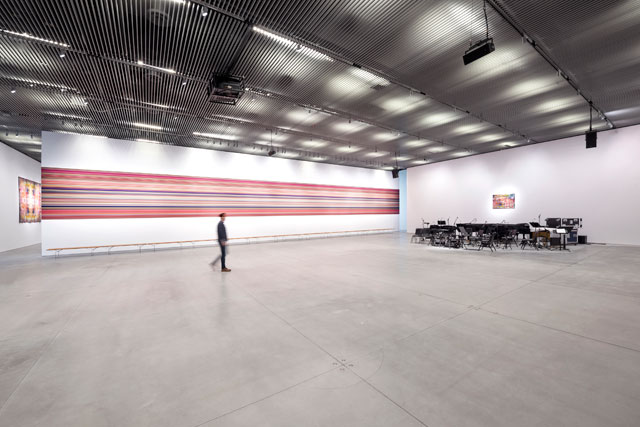 True, the premiering artists feel fully sprung from a god’s head – as with Reich and Richter, Quincy Jones, Steve McQueen, Renée Fleming and Bjork are as pre-tested as a moonshot. Summer, though, will bring riskier work – POWERPLAY, a celebration of radical art by multimedia artists Latasha, a kung fu musical floated with aerialists and a song re-mix by Sia, new work by Oscar Murillo exploring the perils of capitalist/artist collaboration (to wit, the fated mural commissioned from Diego Rivera by Nelson Rockefeller), and work by 52 artists not represented by galleries. In the non-profit spirit of y’all come, knowing that the Shed’s membership may be clubbing in the Hamptons, ticket prices will reduce to as low as $10 – even zero. It sounds Promethean, this promise of a new art paradigm, but if Poots pulls it off, the Shed will serve as the welcome heart of the overthought, overbuilt Hudson Yards enterprise. The audience that crowded in to McQueen’s opening night Soundtrack of America was literally jumping. 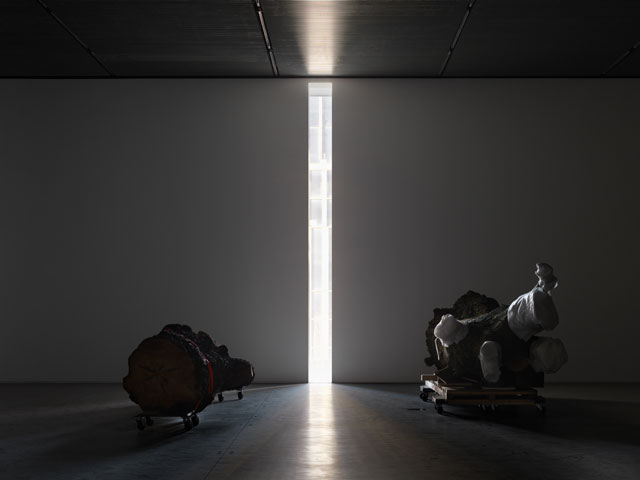 The larger question is whether, in the end, the Shed’s heft will conflict with its mission. Thoughtfully planned out, with “class A” specs (“Send the Mona Lisa”, crowed Diller, “we’re fully humidity controlled!”), and all three prosceniums sound-and-light-proofed to stage simultaneous performances, the centre is a spectacular achievement. It is also overwhelming. Telescoping out from the development’s 88-storey high-rise, #15 (designed by the same firm, but for a very different type of client), with a movable wall that is fashioned of enough steel to sink three Normandies and powered by six-foot-wide bogie wheels that could have rolled out Mount Olympus, this marvel of engineering threatens to stifle the very tendrils of the brave work it is committed to nurture. 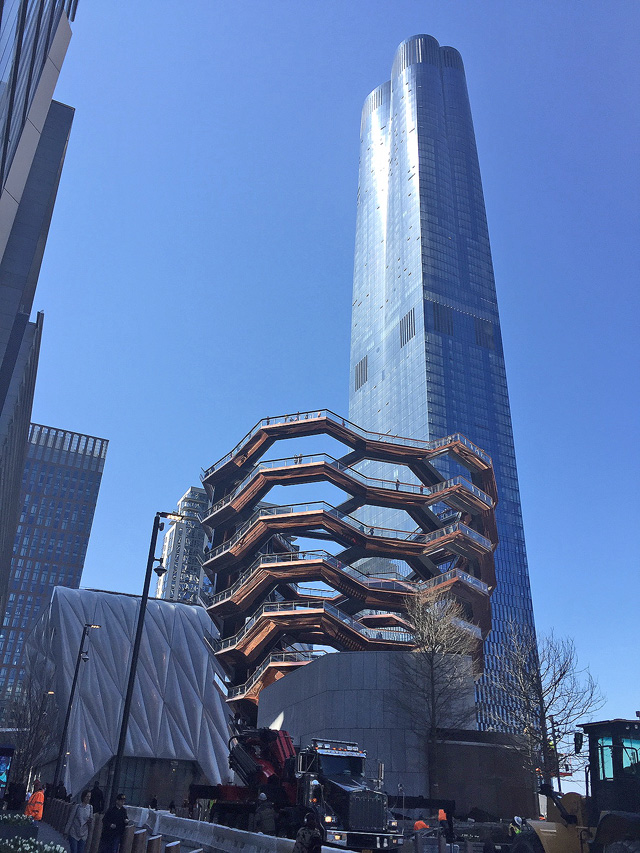 Grand for the programming to reach out to struggling communities, but their gritty art-makers are a far vibe and distance from these polished stages. Can a self-contained biosphere serve as a petri dish? Won’t all this pre-imagined creativity suffocate the real thing?

Most impacting may be the Shed’s inescapable context – a real estate project that is the largest and costliest in US history and of a weight that even Diller’s steel-ribbed shell may not countervail. Hudson Yards, billed as an innovative, amenity-rich Elysium, but, in actuality, a lavishly overwrought Epcot for 20,000 office workers and 40,000 residents, is a developer’s dream hoping not to wake up. 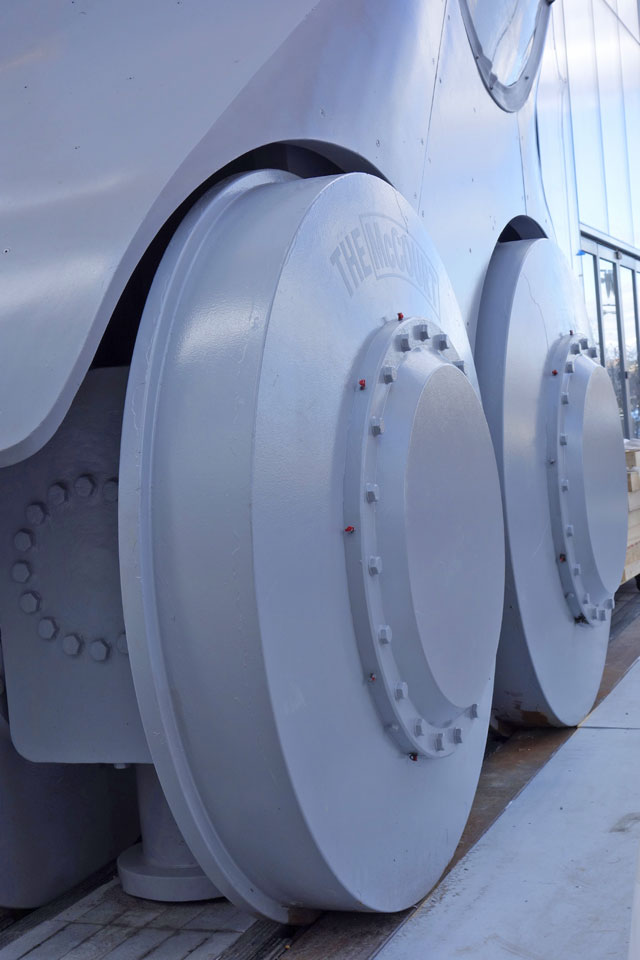 Sealed off on a dais from anything resembling a sidewalk, and looking down on the navel of Thomas Heatherwick’s shiny $200m Vessel, is a corporate steel-and-glass vision of how gleaming, multi-use starchitect buildings on stilettos can enfold every possible amenity the 1% can afford. “We own a coat but don’t want to venture out,” this self-contained cluster seems to say. “Everything you can possibly desire is here. You need a workout? The first-ever Equinox hotel offers, per its website, an “entirely reimagined” high-performance lifestyle guide to “how you move, eat, sleep and live”. Looking for a four-star dinner? Try Thomas Keller’s TAK, David Chang’s Kāwi or José Andrés’ Mercado. A jewel? Over there is Cartier. A bag? Close by is Gucci. And the three-level shopping experience at Neiman Marcus’s long-awaited first New York department store will furbish your entire wardrobe. Retail is dying, but not here. The question, of course, is who is “You”? The apartments (starting at $5m and climbing to $32m for a penthouse) are only 60% sold, merely a few of the designated 4% of affordable-rentals are onsite – and those just in two buildings, with access through a separate entrance. 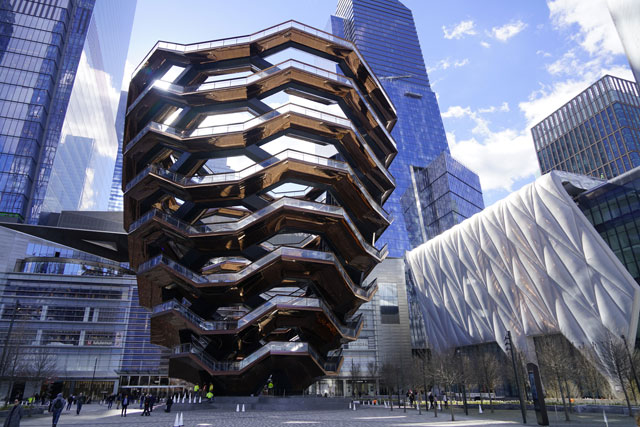 Already so not-Manhattan is the developer-speak substitution for “mall” of “vertical retail” and a the closed-in concrete plaza to be gentled by greenery furbished by a “spirograph” (what?) of elliptical planters, since even the landscape talents of Thomas Woltz can’t grow to scale his scheme of bald cypress and black gum trees.

And where, in this first phase of the eponymous project, are views of the river it faces – that mighty body of water that opened New World discovery and has an entire school of painting named for it? The viewing opportunities, including the vertigo-inducing, highest-in-the-western-hemisphere observation deck at #30, necessarily angle east because the multimillion-dollar selling point of a river view is reserved to Phase Two. Named, unappealingly, Western Yard, this second iteration of muchness scheduled for completion around 2030, will edge the new polis to the water’s edge and out to Pier 57, retooled to headquarter Google; to Pier 55, floated by Heatherwick for Barry Diller’s coming-soon $250m fantasy “island”, and to a Whitney Museum-commissioned permanent art installation by David Hammons.

Nowhere in all this imposed gentrification is the hope for an authentic, street-level neighbourhood with the granular mix of ground-up amenities – newsstands, outdoor cafes, shops, perchance a vegetable market and, most winningly, affordable studio spaces – that already no longer defines Manhattan. Perhaps the entire formula was devised more for foreign investment. Because no one is predicting that the millennial draw to Brooklyn will dry up any time soon.

The gauntlet flung, there is no moving back. The mantra for both the shiny polis and ambitious Shed is “we offer you tomorrow”; the question for us is “will we buy it?” Unintentionally apt, the Lawrence Weiner lettered koan that constitutes the Shed’s only permanent art installation reads IN FRONT OF ITSELF. 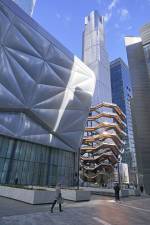 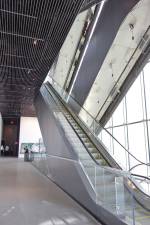 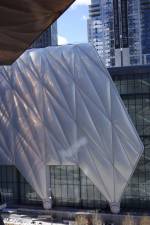 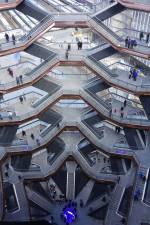 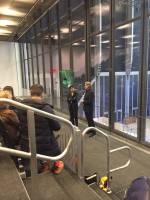 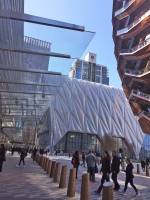