Technology and art 8: `The prehistory of the visible'

Technology and art 8: `The prehistory of the visible'

To read Burnham on vitalist or biomorphic sculpture is to be reminded that there is no apparent correlation between the stature of a given artist and the validity of his scientific assumptions. The discontinuities between science and modern art are as interesting as their interaction.

The remotest discoveries of the chemist, the botanist, or mineralogist, will be as proper objects of the poet's art as any upon which it can be employed, if the time should ever come when these things shall be familiar to us, and the relations under which they are contemplated by the followers of these respective sciences shall be manifestly and palpably material to us as enjoying and suffering beings. (Wordsworth.)

If a word of justification is needed for the featuring in this issue of the work of a scientist, Hans Jenny, let us try and avoid getting embroiled in a demarcation dispute about art and science. Provided it is still meaningful to talk about an 'avant-garde'—when a commentator like Professor John Weightman, writing in last July's Encounter, can use the term to describe unwittingly an ethos evocative of the period of Apollinaire—then it may be claimed that a strong syncretic tendency exists in certain truly avant-garde circles today.

There is scope for a thesis on how this correction to over-specialization has come about. Here I shall merely suggest some threads that such a book on science and modern art might follow.
A central consideration is the whole concept of organic form. This, according to Philip C. Ritterbush, originated as a literary aesthetic principle, for instance in Coleridge and Goethe, before it became a guiding idea in biology. 'The influence of the idea of organic form shows the fertile play of the aesthetic factor in scientific fields such as biology whose content is highly visual. Nowhere is this more clearly shown than in the study of the structure of the tissues of organisms.' (The Art of Organic Forms, Washington 1968). The idea of the organic in modern art, and the influence of books like D'Arcy Thompson's On Growth and Form (1917) and Blossfeldt's Art Forms in Nature (1929), are discussed in Jack Burnham's Beyond Modern Sculpture.

To read Burnham on vitalist or biomorphic sculpture is to be reminded that there is no apparent correlation between the stature of a given artist and the validity of his scientific assumptions. The discontinuities between science and modern art are as interesting as their interaction. When the facts of real science are seen as intolerable but impregnable—as they have been seen by many sensitive modern minds—there is a tendency to retreat into ideological backwaters. The question today is how far this kind of retreat is still possible without a psychological backlash which jeopardizes an artist's integrity.

Aaron Scharf's Art and Photography contains a useful passage, with accompanying notes, on the influence of photomicrographs and telephotographs on art, including the work of Redon, Moholy-Nagy and Klee. A text from Klee's notebooks, 'Exact experiments in the realm of art' (Dessau, 1928), suggests that too much emphasis has been put on the objects and design-styles produced by the Bauhaus and too little on the research that was done: `In art . . . there is room for exact research, and the gates have been open now for quite some time. What was accomplished in music before the end of the eighteenth century has hardly been begun in the pictorial field . . .

Algebraic, geometrical, and mechanical problems are steps in our education towards the essential, towards the functional as opposed to the impressional. We learn to see what flows beneath, we learn the prehistory of the visible. We learn to dig deep and to lay bare. To explain, to analyse.'

`The prehistory of the visible': Klee's phrase, as well as being in close accord with some of Dr Jenny's ideas, is an adequate summary of why Jenny's work should appear in an art journal.

A representative of this underestimated aspect of the Bauhaus is the painter Hans Haffenrichter, a student at the Weimar Bauhaus between 1921 and 1924 who now lives in western Germany. During the war, and subsequently as art instructor at an American army school in Heidelberg, Haffenrichter worked on the graphic representation of many different molecular structures. One of his pencil molecular drawings (1944), showing the structure of quartz, is illustrated here; another, of copper, is illustrated in the 1968 Bauhaus exhibition catalogue (whose biographical note on Haffenrichter is, however, misleading). Both drawings are successful in mapping elusively three dimensions on to two—a graphics problem for which the hologram has now provided a technical solution.

Professor Haffenrichter emphasized to me, at an interview this summer, that the purpose of this work was not primarily didactic, though it was valuable to scientists and teachers. His chief aim had been to 'make visible the invisible'; and here is a clear link with the approach of Klee and Jenny. He believes that the artist can discover by intuition what is documented afterwards. Haffenrichter has more recently turned to abstract painting inspired by scientific images.

Among several others who have worked in this field since the war, Gustav Metzger's theorizing on auto-destructive and auto-creative art seems especially articulate. In 1968 at the Filtration Laboratory, University College of Swansea, Metzger arranged an exhibition using water-jets, liquid crystals, hotplates, silicones and other media, as a practical expression of his principles.

'Arquitectos de Mexico' is to publish a special issue in Spanish and English for November/December 1969, devoted to the use of computers and cybernetics in art and architecture. The guest editor is Josefina Mena, who teaches architecture at Kingston College of Art, and from whom copies are obtainable (32 Ainger Road, London NW3). A limited number of free copies will be available to educational institutions and libraries. Among the contributors are Stroud Cornock, John Lifton, Robert Mallary, Gustav Metzger, Leonardo Mosso and Gordon Pask.

Buckminster Fuller's essay, Operating Manual for Spaceship Earth, which includes material familiar from his recent lectures, is published by the Southern Illinois University Press, and distributed in the UK by Feffer and Simons at 40s. 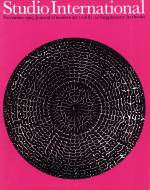 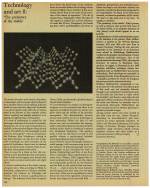