Stalking the Image: Margaret Tait and her Legacy

Stalking the Image: Margaret Tait and her Legacy

In the centenary year of Tait’s birth, this exhibition of short films celebrates her pioneering legacy alongside the work of younger artists whom she influenced 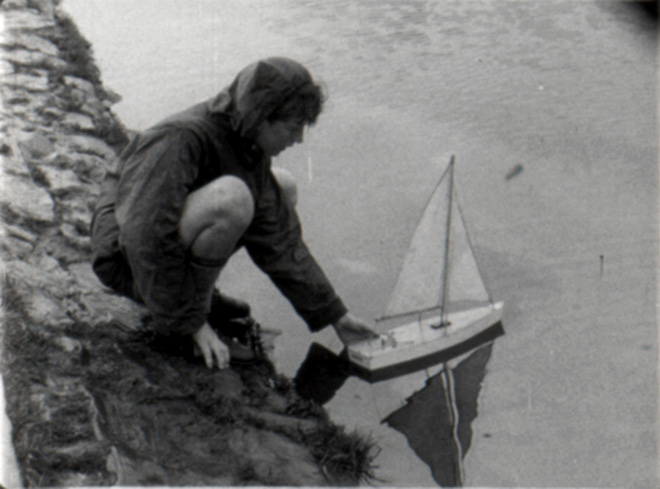 Born 100 years ago on the island of Orkney, Scotland, the film-maker and poet Margaret Tait (1918-1999) became one of Scotland’s most original and visionary artists, bringing a poetic sensibility to her studies of life in the moment. Paying homage to Tait’s achievements, on the centenary of her birth, as well as acknowledging her legacy and the particular influence she had on a younger generation of artists, Stalking the Image, at Glasgow’s Gallery of Modern Art, is a timely retrospective of a pioneering, yet previously undervalued Scottish artist.

Inspired by the Spanish poet Federico García Lorca’s line about “stalking the image”, and probably by his work more generally, Tait’s approach to the moving image was philosophical and poetic; she aimed to find the true nature of things through focused and meditative observation. “Breathing with the camera,” as she also described her approach to film-making, entailed fixing her gaze on the smaller, everyday aspects of life, magnifying sensation and human feeling, and creating a rooted, grounding sensuality across her work. Using mainly 16mm film, Tait worked determinedly outside the commercial film industry. A selection of nine of her experimental short films, made across 47 years, is shown on a screen on loop, running over 140 minutes.

Margaret Tait, Where I Am Is Here, 1968. Film still. Courtesy of the Margaret Tait estate and LUX.

Beginning with My Room. Via Ancona 21 (1951), a two-minute silent film shot in black and white, Tait’s early short takes a journey around the apartment she lived in while studying at the Centro Sperimentale di Cinematografia in Rome. Lingering on objects in her room – a hot-water bottle, some white sandals, a reel of film, a bottle hanging from a hook – Tait’s sense of style and intimacy is recognisable and enjoyable even at this early stage. There is a curious but ultimately friendly power dynamic at play: it is like visiting a friend’s flat, but with the gaze directed by the inhabitant herself.

The next film in the selection, A Portrait of Ga (1952), reveals a more developed version of this intimate, poetical style. Filmed in colour this time, it depicts the artist’s mother, using fragments and details from the subject and her surroundings to piece together an original and moving work. Combining short, still cuts of her warm and smiling mother with closeup images of their surrounding landscape (a windy Orkney, where Tait grew up) and the subject’s belongings (cigarettes, sweets), A Portrait of Ga creates a sensual and intriguing atmosphere – at once, nostalgic and eerie, warm and detached.

Margaret Tait, Where I Am Is Here, 1968. Film still. Courtesy of the Margaret Tait estate and LUX.

The consistent creation of compelling drama from carefully observed details is further explored in Tait’s later films, as her style and interests become ever-more refined and developed. In Where I Am is Here (1964), Tait creates a portrait of Edinburgh, this time shot in black and white again, where the city is brought alive in its moments and contrasts, from snow falling on a dark winter coat to the contrasting old and modern buildings. The heavy, moody atmosphere of Edinburgh is given a sensual turn with Tait’s intense and unwavering gaze. Going back to Orkney in Place of Work (1976), Tait explores the place where she and her family lived, as she did in A Portrait of Ga. Particularly mesmerising is the closeup footage of a meadow of flowers, alive in the Orcadian breeze and capturing the vivacious spirit with which Tait focused her attention, however subtle and meditative her films seem at first.

Tait’s influence on a younger generation of film-makers has been invaluable, and the exhibition is as dedicated to showing Tait’s legacy in turning the focus to her descendants as it is to her own work. Nine contemporary artists working with the moving image who in recent years have received the Margaret Tait award (Scotland’s most prestigious moving image prize for artists) are therefore shown alongside Tait: Torsten Lauschmann (2010 Margaret Tait Award recipient), Anne-Marie Copestake (2011), Stephen Sutcliffe (2012), Rachel Maclean (2013), Charlotte Prodger (2014), Duncan Marquiss (2015), Kate Davis (2016), Sarah Forrest (2017) and Alberta Whittle (2018). Their films are shown here on rotation, on the second screen in the exhibition, which forms a partition in the large space. On the day I visited, Rachel Maclean’s mocking, surreal and satirical film A Whole New World (2013) was on show.

In many ways, Maclean’s work couldn’t be more different from Tait’s. Showing a hyperreal, absurdist, often garish world, in a postapocalyptic landscape, the film explores the legacy of the British Empire in the context of globalised, chaotic modern life.

Featuring the artist playing all the characters in thick makeup and colourful, kitsch costumes, the film draws from various pop cultural references, from video games to political debates about nationalism, the monarchy and identity politics more generally. In its mocking use of familiar narratives – thwarted cross-cultural love affairs and colonial adventures – it presents a jarring, entertaining and highly inventive, if slightly hellish, vision of our world today.

Going between A Whole New World and Tait’s subtle, atmospheric, lingering shorts can seem a little bizarre, but, in a way, the films complement each other – Tait’s work offering a retreat from the dystopian world that Maclean involves us in, and Maclean offering light relief from the brooding melancholy that underlies Tait’s “breathing with the camera”. Ultimately, Stalking the Image, part of a series of events celebrating the work and legacy of Tait, is a reminder of the vast possibilities of the moving image beyond the commercial film industry, and an insight into the rich imaginations and interior lives of its Scottish pioneers past and present.