The death of the painter Steven Campbell on 15 August 2007 sent shock waves through the London and New York art worlds as well as his native Glasgow. His early recognition on a Fulbright Scholarship at the Pratt Institute New York (after his period as a mature art student at Glasgow School of Art shot him to early fame in New York. He pioneered the proper investigation of painterly narrative, albeit figurative, but with a sardonic yet innocent deconstructive agenda. Gallery owner Barbara Toll and then Marlborough Fine Art in London, signed him up from this time and a soul-searching series of paintings emerged in rapid succession. This obsessive, talented and utterly committed painter still had a considerable future in his maturer years, now cut short.

Some twenty years ago, Studio International published Clare Henry's excellent appraisal of Campbell's paintings, and we also featured one on the cover. Accordingly we now reprint, from Volume 200, No 1017 (l987) her assessment of Campbell's work at the time of the Marlborough Fine Art exhibition in London, at a standpoint of early mid career for Campbell. Her recognition of his greater approval ratings in the US than at home anticipated cannily the slow recovery of his erstwhile support in Britain. Campbell died aged 54, a tragically young age.

It must be difficult being a newsworthy saleable commodity; even harder to have scaled the ladder of success, reached the pinnacle – only to be cast down.

Steven Campbell was the rags-to-riches boy wonder who quit his steelworks job to charge through Glasgow School of Art, then leapt on a plane for New York and made his name – if not exactly overnight, then pretty quickly. His meteoric career was bound to make enemies. Once up there one expects to be knocked down. The prodigal Scot’s return from four triumphant years in the States has been no flower-strewn welcome. Campbell’s London show at Marlborough Fine Art was greeted with mixed reviews ranging from the veritable hatchet job – ‘Trivial artistic flab with nasty shiny paint surfaces, an artist for people with a large tolerance for whimsy’ via ‘jumped-up, heavy-handed rantings and visual fisticuffs of the cloth-eared and big-headed’. Even the newest London daily found numerous limitations to this ‘rich man’s Glen Baxter’, particularly Campbell’s tendency to repetition and his clumsy method of painting his ‘soup of arcane motifs’.

So, is Campbell really out on a limb as they claim? Is ‘figuration’ already a dirty word? It has to be admitted that Campbell’s penchant for narrative and literary themes, first von Helsing from Dracula, then P G Wodehouse, now Foucault and Darwin (even Queen Victoria’s diaries came in for a Campbell-type overhaul in 1985–86), sometimes almost takes over from the picture-making element. But then that was, after all, what first attracted people to his work. Only a year ago critics rhapsodised over his full-blown tours de force, his talent for storytelling, his Romantic irony, his unique imagination. ‘Campbell’s paintings may well be strange, absurd, funny, even grotesque. His is a deeply serious art and I believe that he is one of the most forceful and original artists to have emerged lately in Britain’, wrote The Times. The Guardian concurred: ‘The most exciting painter to emerge anywhere for many years’.

So, is it Campbell’s paintings or fashion that has changed? Or a bit of both? Certainly his new paintings are technically more fluent. The accusations of a ham-fisted, untutored style can be rebuffed. At the beginning Campbell’s vivid imagination combined with lateral thinking did run ahead of his brush, leaving ungainly, overworked surfaces. Today that is resolved. His mania for clutter, a need to fill every inch of the surface with plants, ferns, insects, ping-pong balls, highly-patterned herringbone tweed garments and wildly incongruous accidents has abated somewhat. The figures are smaller, less clumsy; the area of incident less claustrophobic. Nonsense and panic are more psychological, less physical. No-one tumbles through the ceilings of Wee Nook Cottage anymore. Intellectual debate is now flavour of the month.

Maybe this is the crux of Campbell’s fall from grace. His early pictures produced in America played up the quaint Scottish angle – or what foreigners (and this includes the English) thought was Scottishness. Campbell knew exactly what mix of tartan and heather, glen and rocky mountain or crag, plus roving rural ramblers, his public required. He threw in the odd joke – the more eccentric and idiosyncratic the better. It was all harmless good fun. Wee Nook Cottage was the crowning glory, its coy nameplate only excelled by its loony inhabitants, a cross between Bertie Wooster and Edward Lear’s mad Old Men. The English can cope with this sort of nonsense – and the more the Scots poke fun at themselves the better. But once these upstarts from north of the Border try to dabble in serious things like philosophy or science – much less make a point or two about Darwinian theories of evolution or Foucault’s discoveries about the velocity of light in water – that’s a different matter.

Campbell has also made the mistake of bragging of his speed at making paintings (possibly with the Maker in mind, he takes six days; never does preparatory sketches; just ‘slaps it in’). Dilettantism and flippancy are also part of the pose, and some people resent being informed that ‘sixty per cent of the things in my pictures matter and the others don’t – they’re just there to fill it up’. What’s more, he encourages the cynical approach, lets folks know he sometimes takes them for a ride.

Despite all this one has to admire the sheer energy and gusto, the range of concepts; above all the ambition of these new paintings. Campbell’s virtues are manifold. He is open about where his paintings come from, about his admiration for and use of both eighteenth-century ideas and nineteenth-century book illustration. ‘I’ve always wanted to have a go at the philosophical stuff. I love the notion of the pastoral and the literary figures and scientists involved. It’s a big stew. Hume, Foucault, Wallace, Darwin. Much of it’s pretty wrong when you look back but it’s full of beautiful poetic ideas, amusing and odd. I just pick from them. Cannibalise. Know a little but a lot.’

The same applies to the battered second-hand books that fight for survival amid piles of rubbish, squeezed-out paint tubes, old rags, empty turps cans, cassette tapes and the occasional half bottle of vodka on his very messy studio floor. Whilst working he often grabs for a volume, taking a plant from this page, a gesture from that, to prompt the next move. ‘If you look at some of the nineteenth-century magazines, the heights those people reached were marvellous’.

Campbell is a contradictory figure. An urban Scot, he finds his inspiration in the English pastoral tradition. His most successful pictures depict characters doomed to accident and failure. Serious problems are explored via comedy. Buffoonery rubs shoulders with intellectual heavyweights. Last and not least this Scot is proving more popular abroad than at home. It was ever thus.

But Campbell has determination and staying power. He proved that long ago. He also has the satisfaction of knowing that he pioneered a whole new appreciation of contemporary Scottish art worldwide. His rhinos and disruptive genes, his flea-eating bladderwort and hunters-cum-Doppelgangers may court disaster but Campbell is, I am sure, here to stay. 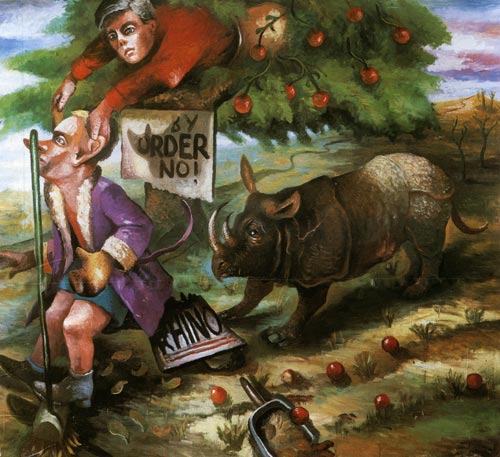