The retrospective of Ian Hamilton Finlay (1925-2006) at the Glasgow Gallery of Modern Art is housed in three rooms on the top floor of the building, up a winding staircase (or lift, for those who need it) and past a neon work marking out a, presumably imaginary, “gentlemen’s club”.

The space is limited, but that suits Hamilton Finlay’s work, which is mainly small screen prints, and a sculpture in the third room. In the first room, his prints of boats and related imagery remind visitors of the artist’s Scottish West Coast roots; the second room is filled with his more political work, which earned him the title and reputation of a revolutionary, politically as well as artistically.

Part of that innovation was the use of words and concrete poetry in his artwork, and in his pursuit of a vision combining the two. Although Hamilton Finlay studied at the Glasgow School of Art in the 1950s, he became celebrated for his short stories, plays and poetry before his graphic work. In 1961, he set up the Wild Hawthorn Press with Jessie McGuffie and within a few years was well-known as a brilliant and leading concrete poet, in Britain and then internationally.

His visual poetry and the graphic work he contributed to the publications of the Wild Hawthorn Press also served as a way into the artwork he is now so well known for, and which is exhibited in the Glasgow show. From screen prints paying homage to Scottish fishing boats and landscapes, to prints and concrete poetry that championed and criticised elements of Neo-Classicism, the French Revolution and modern political debate, to installations and sculptures that fused these ideas with natural materials and environment, Hamilton Finlay implicitly presented connections between the natural and human society, and between lessons from the past and modern dilemmas. He managed to express these ideas with a combination of subtlety (of colour, line and concept) and a bold, recognisable style, that was itself influenced by Neo-Classicism and the Pop Art and graphic styles fashionable in the 1950s and 60s.

The more political screen prints in the second room are testament to his love of words and pictures; witty and astute slogans and phrases complete his graphic work about the French Revolution, and bring a contemporary slant to his references to classicism and various historical moments, along with modern symbols and style. In After Bernini (1987), referring to Bernini’s 1625 statue of Daphne fleeing from the god Apollo, Daphne wears a sash, representing the Republic, restrained by an Apollo who represents the leadership of the Revolution. And in Now the Names of the Twelve are These (1987), he combines the names of some of the 12 apostles with the surnames of key figures from the French Revolution, emphasising the legendary martyrdom of the revolutionary leaders, and equating their apparent self-sacrifice with that of the disciples. In Two Scythes (1990), he presents the symbols of communism and death with the Nazi SS symbol, apparently equating the potential fascist manifestations and consequences of communism with that of nazism, simply by merging the symbols of each political movement. This warning is also emphasised with a print of the French flag, Bicentenary Tricolour (1989), with the words (in English) of “Liberty for some/Equality for some/Fraternity with some” in each block of blue, white and red, suggesting a disillusionment with revolution that does not fully deliver its ideals, and which even deceives the many individuals who suffer for the cause.

The French Revolution was obviously a subject of fascination for Hamilton Finlay, and that manifested itself in installations as well as screen prints and concrete poetry, two of which are now displayed on the top balcony of the Gallery, reaffirming his familiar theme of liberty emerging at great cost to individuals and society, and not necessarily the true and full realisation of that idealistic vision. His other sculptural work tends to focus on his resurrection and modernisation of Neo-Classicism, or rather his merging of the two, as one and the same. Using a variety of materials, such as stone, constructed objects and neon lighting, he explored the natural environment of his youth, and the way it could accommodate his own ideals about design and beauty.

His garden, Little Sparta, is the most famous manifestation of this vision, reviving the concept of the “poet’s garden”, designing the space of the hillside country near Edinburgh to include sundials, columns and garden temples. It is touching to see that the artist, who was apparently so disillusioned with revolution and politics in the mainstream sense, and the way that reality did not match the ideals, went on to find that he could realise his own vision of beauty and harmony in a garden of his own design. If we can learn anything from Hamilton Finlay’s legacy, it is that art can realise visions of harmony and peace, where politics perhaps cannot. The persistence with the social and political as well as the natural ultimately deepens the impact of his body of work, and the quiet beauty of his style and idealism. The Glasgow show, though modest, achieves a well-rounded and perceptive retrospective of his art, clarifying, with careful attention to his various interests and media, the connections to be made between his observance and relationship with society and the natural environment. Though he so often referenced the past, Hamilton Finlay’s work proves ever more relevant and universal in its ideas and observations. 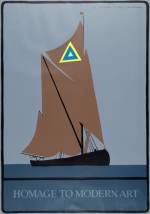 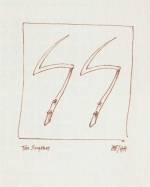