The experience of being deaf was integral to the poignant portraits painted by John Brewster Jr. In his portraits, Brewster (1766-1854) not only found a way to connect with the hearing world, but he discovered how to make the silence that surrounded him palpable to those who viewed his works. He revealed the inner worlds of his sitters, which he sensitively grasped as a lifeline.

Brewster is the subject of 'A Deaf Artist in Early America: The Worlds of John Brewster Jr', on view at the American Folk Art Museum in New York City. The exhibit was organised and first shown at the Fenimore Art Museum in Cooperstown, New York, and travelled to other venues before arriving in New York City.1 The exhibit marks the first time in nearly half a century that a good number of Brewster's portraits have been brought together. Additional works are included in the New York showing: five paintings and a needlework for which Brewster may have contributed drawings or sketches.

The first son and third child of physician Dr John Brewster Sr and Mary Durkee, it is likely that Brewster would have followed in his father's footsteps in his birthplace of Hampton, Connecticut, had he not been born deaf. As such, his education was extremely limited. He communicated with his family through pantomime and improvised hand signals. His family heritage left indelible marks on Brewster, but helped him to secure commissions from wealthy patrons. Dr Brewster was descended from a Puritan leader, William Brewster, who had led a small group from England to America on board the Mayflower. Members of the Brewster family had prominent roles in the community, and Brewster walked easily among the Federalist elite. Still, communicating with them was not easy. He must have felt further dislocated, at the age of 17, when his mother died. While there were places in which other deaf people opted to live together,2 surrounded by those with whom they felt comfortable, Brewster not only chose to remain in his own community, but later to venture out as an itinerant portraitist after merely five years of training. An abundant natural energy and ingenuity came to his aid; he managed to advertise his services and acquire patrons who commissioned him for subsequent work. Some of his sitters remarked on his resourceful intelligence, while others were disturbed by his gesticulations.

From about 1790, Brewster received his only training from a local artist, the Reverend Joseph Steward (1753-1822). Steward's works were influenced by Connecticut portraitist Ralph Earl (1751-1801), who had studied in England and returned to America to reconcile the 'grand' manner with the American character that had developed in New England. Earl downplayed romanticised views of the sitter, toning down the rich colours but retaining intricate detail in the sitter's features and clothing. Steward taught his pupil these principles. Out on his own, Brewster experimented with Earl's and Steward's methods. He had a strong sense of patterning and of the effect that its judicious use could bring to his simplified settings. He also used broad, flat areas of colour to highlight a sitter's attitude and bearing. True to his community, he displayed the dignity his patrons sought to portray to the world, simultaneously capturing the more casual lives they led in America.

In 1795, when his brother, Dr Royal Brewster, moved to Buxton in Maine, Brewster went with him. Portraits painted by Brewster between 1795 and 1800 in the Portland area of Connecticut show a growing confidence in his abilities. By 1800, Brewster was a mature artist. He thrived, advertising his services as a portraitist and painter of miniatures, travelled and received important commissions from wealthy families in Maine and Massachusetts. He came to be known, particularly, for full-length portraits of children. These are the most remarkable of his works.

At this point in his career, at the age of 51, Brewster altered his path and gave up his hard-won autonomy to attend a school for the deaf.3 Students at the school were less than half his age. While there, Brewster learned a version of what came to be known as American sign language and was among the first graduating class. Was it odd that he chose to return to the world after graduation? Perhaps not. At school, he lived in a community of people who only knew exterior silence and the importance of the interior world. And yet, his portraits of hearing people are filled with silence and reveal the sitters' interior worlds. Brewster had found a commonality; a place in which he was like his sitters. Their clothing and the settings of the works reveal something about who these characters were in the world, but the intensity of their gazes and the modelling of their faces indicate who they are inside. The real lives of these sitters take place on a different stage, while they perform their worldly roles.

In 'Mrs Foxwell Cutts (Sarah Scammon)' (ca.1800), Brewster's method of playing the dreamlike against the real is clear. This portrait of the wife of a wealthy sea merchant captures her inner strength through her gaze, which belies the fragility of her body. Her narrow shoulders, child-like hands and the small book she holds in her left hand lead the eye to three tiny flowers held in her right hand. The gaze is so intense, however, that Brewster provides more ballast with the delicate detail and colour of her rose-colored dress and white lace and bows.

For all the peace and silent introspection evident in the pictures, there is something unsettling about them. Evidently, Brewster had a strong rapport with his young sitters. He grew up dependent on those around him, just as children rely on adults to help them navigate the world. Although he came to support himself well and travel on his own, it seems that he also remembered what it is like to be a child: observant and aware, and yet powerless. His pictures of children evince an eternal quality to childhood, unguarded and curious, along with a strong sense of individuality. This is most clear in 'Six Children' (ca.1805). Here, Brewster turned his canvas on its side and placed each of the six children into their own space - their own world - alone, but connected by a universal experience.

Symbolic elements were important in New England portraiture at this time and many of Brewster's works include such symbols. Childhood mortality was common, so often children were shown with birds symbolising the flight of the soul when it is set free from the body. In 'Francis O Watts with Bird' (ca.1805), the child's transparent white gown, translucent skin, artificial stance and serene features allude to his tenuous connection to the earth. Some critics have remarked on the peaceful landscape Brewster created as a backdrop, but the dark tones and absence of any human structures could be viewed as disturbing. Francis holds a blue string attached to the leg of a bird perched on a right-hand finger. The child's knowing, placid gaze might indicate acceptance that only when he died could the bird go free.

Brewster's skillful use of patterning appears in many of his works, notably in one unusually playful example, 'One Shoe Off' from 1807. The otherwise dark brown background plunges into a carpet patterned with a bold graphic element. The bow on the child's red shoe echoes the bow-like graphic on the carpet and leads the eye back up the canvas to the other red shoe, which dangles from an untied bow held in the girl's right hand. Traces of red paint are visible under the unknown girl's left foot, proof that the shoe had once been there. The dangling shoe is a quirky touch that may have resulted from a rare instance of reckless abandon in the artist.

After graduation, Brewster is known to have returned to his work with even greater energy and focus. The works completed before Brewster entered the deaf school are subtly different from the ones painted after. He began to use the half-length format, but his compositions still revolve around intense gazes and prominent hands, set off by meticulously detailed clothing. In many cases, the backgrounds are merely backdrops, devoid of detail. Tastes may have changed, but it seems that Brewster had also changed. His sitters seem more human. Ironically, in the small community of the school, Brewster's world grew larger.

In 'Mrs Joseph Prentis (Betsey Avery)' (ca.1830), for example, he painted his half-sister later in her life.4 Betsey's colouring is realistic, with pink flesh tones, and her hands seem more natural. The background includes a window-like device to her right, through which a landscape is seen. This element is somewhat surreal in its artificiality, but also connects her to the physical world.

Brewster's last known work is dated 1834. He died 20 years later. His career is impressive for many reasons, but none so great as the affecting quality of his portraits. Certainly, his works influenced early New England portraiture and are links to the area's culture and history. More importantly, Brewster's portraits give hearing viewers a sense of the silence that exists in a deaf person's world and the yearning for connection. In silence, Brewster found a way to connect with the hearing world and to reveal the interior silence that connects all human beings.

Footnotes
1. 'A Deaf Artist in Early America: The Worlds of John Brewster, Jr' was organised by the Fenimore Art Museum in Cooperstown, New York, where it debuted on 1 April 2005. Curated by Paul S D'Ambrosio, Vice President and chief Curator of the New York State Historical Association, located in Cooperstown, the exhibit first travelled to the Mennello Museum of American Art in Orlando, Florida, and the Florence Griswold Museum in Old Lyme, Connecticut. When its current run at the American Folk Art Museum ends on 7 January 2007, the show will make its final appearance at the Portland Museum of Art in Portland, Maine, beginning on 26 January and closing on 29 April 2007.
2. Martha's Vineyard, Massachusetts and Henniker, New Hampshire, were the two largest communities of deaf people in New England.
3. The Connecticut Asylum for the Instruction and Education of Deaf and Dumb Persons was founded in 1817 in Hartford. Mason Cogswell, whose daughter became deaf at the age of two, was the initial champion of such a school. Cogswell was a patron of Ralph Earl and a friend of the Brewster family. Together with seminary student Thomas Gallaudet, Cogswell sought out two Frenchmen who were convinced that sign language was the 'natural' language of deaf people and who were willing to share their conviction and system.
4. Brewster painted Betsey (ca.1800) , along with his other half-sister, Sophia Brewster, as children. 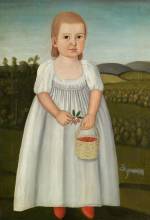 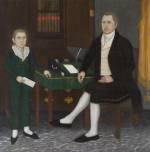 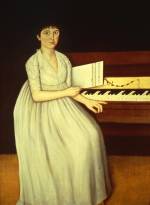 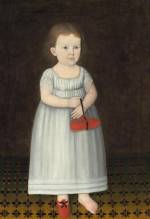 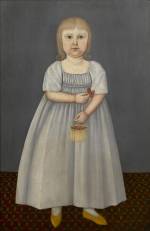 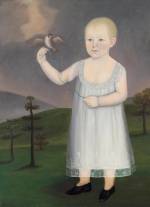