Simon Starling: ‘A little knowledge is a powerful thing, and too much knowledge can stifle creativity’

Simon Starling: ‘A little knowledge is a powerful thing, and too much knowledge can stifle creativity’ 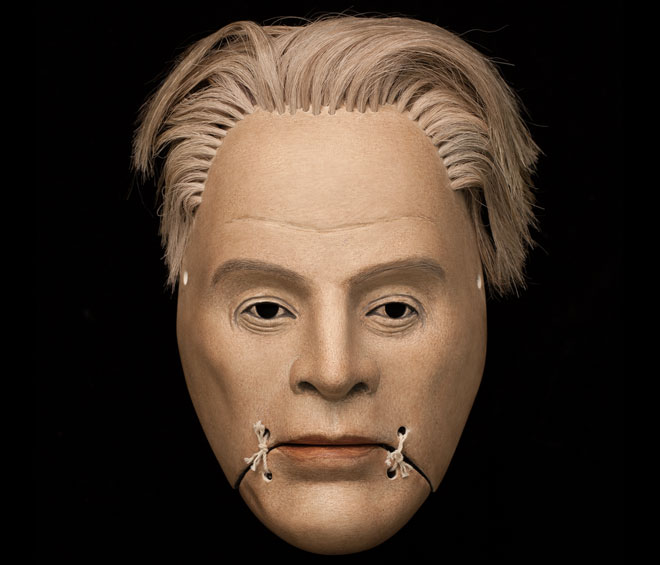 Since it was founded in 1907, the Japan Society in New York, which cultivates knowledge of Japanese culture, has displayed the work of just one non-Japanese artist, the American photographer Ansel Adams, in the 1980s. This month, British conceptual artist Simon Starling (b1967 in Epsom, Surrey) will be the second such artist to have his work presented by the society. To mark the occasion, Starling has focused his exhibition on Noh – Japan’s traditional masked theatre – specifically looking at its impact on western modernism, in the form of WB Yeats’s 1916 play At the Hawk’s Well, which was heavily influenced by Noh. Starling’s reimagining of Yeats’s original production is structured as an installation of newly recreated masks and costumes, a performance video, photographs and sculptures.

Starling, who was awarded the Turner Prize in 2005 for his exhibitions at the Modern Institute, Glasgow, and the Fundació Joan Miró, Barcelona, is based in Copenhagen, and will present a solo exhibition at Casey Kaplan, New York, in 2017.

Allie Biswas: How did you start researching for your show at the Japan Society? Did you come to the project with prior knowledge of Yeats’s play, At the Hawk’s Well?

Simon Starling: It’s been an ever-expanding interest of mine that took root six years ago when I started work on an exhibition for Hiroshima City Museum of Contemporary Art (Hiroshima MoCA). When I visited Hiroshima for the first time, I discovered the interesting story of a Henry Moore work, Atom Piece (1963-5), which the museum has in its collection. It’s a story of double identity and disguise that connects back to Moore’s monument to the world’s first nuclear reaction (at Enrico Fermi’s Pile Number 1 in Chicago), which is essentially a larger version of the sculpture they have in Hiroshima, but under a different name (Nuclear Energy). The cold-war intrigue that surrounds the evolution of these sculptures led to an interest in masked Noh theatre (Starling’s 2011 Project for a Masquerade (Hiroshima) at Hiroshima MoCA), which in turn led to the discovery that, 100 years ago, WB Yeats had similarly tried to co-opt this most traditional of oriental art forms to avant-garde ends. This led to a long period of research that culminated this summer in the realisation of At Twilight, a play for two actors, three musicians, eight masks and a donkey costume.

AB: I understand you worked with Yukie Kamiya, the director of the Japan Society, on two previous projects in Japan – the 2014 Yokohama Triennale and your show at the Hiroshima City Museum of Contemporary Art in 2011. How would you say that these experiences impacted on the development of At Twilight?

SS: Yukie Kamiya worked for many years at the museum in Hiroshima and it was her invitation that led to this ongoing body of work. Yukie knew of my interest in Henry Moore and of my Infestation Piece (Musselled Moore), made in Toronto, and rightly hoped that I might find inspiration in Hiroshima and its very specifically focused collection. Neither of us could have anticipated quite how rich a seam of material that invitation would unearth. It’s been a long and hugely inspiring journey, and one that will find a new focus in my exhibition at the Japan Society, which brings together material from the play realised this past summer with the Common Guild in Glasgow, as well as a host of historical material from North American museum collections.

AB: What are your personal experiences of Japanese culture, and were there any specific aspects that you wanted to draw out through your exhibition?

SS: I’d had an interest in Japanese photography early on in my career, but only started to visit Japan with the invitation from Hiroshima. One of the things that immediately struck me was the very special relationship between form and material in Japanese culture. When you start to visit historical sights in Japan, you soon realise that many are not as they first appear. Large numbers of the hugely important historical buildings are only decades old – their form having remained constant over hundreds of years, with their fragile building materials either burned or rotted. It’s an utterly different approach to western modes of preservation, but is fundamental to everything, it seems. Even the mask-maker I worked with in Osaka for Project for a Masquerade and At Twilight is essentially involved in making what we might refer to in the west as “fakes” – lovingly replicating the look and feel of ancient masks with all their distressed surfaces and chipped paint. His masks are highly valued artefacts – the product of a rigorous, 20-year-long apprenticeship.

AB: What relationships between western modernist art and Noh theatre were you interested to explore?

SS: The play and exhibition At Twilight looks at a short-lived moment in the early-20th century when Noh theatre had a significant impact on the European avant garde. It was a moment when, for the very first time, a lot of Japanese culture was becoming available in the west. The poet and playwright WB Yeats discovered Noh theatre in 1915/16 through his then secretary, the young American poet Ezra Pound. Pound had something of a reputation as a translator and had been approached by the widow of [art historian] Ernest Fenollosa to complete a set of English translations of Noh plays that had been left unfinished at her husband’s death in 1908. Fenollosa had been a hugely important figure in the opening up of Japanese culture to the west. For Yeats, who had grown tired of European theatre, the discovery of these aristocratic Japanese dramas with their spare economy and shape-shifting characters, captivated him, inspiring a string of neo-Noh plays that began with At the Hawk’s Well. I became fascinated by this moment of cross-cultural misappropriation and monolingual translation. It soon became clear that it was precisely Yeats’s lack of knowledge of Noh, the superficiality of his understanding, that allowed him to co-opt such a deeply entrenched Japanese cultural tradition to contemporary effect.

AB: The 1916 production of At the Hawk’s Well was a collaborative effort, with Yeats bringing in other key writers from the period. Can you talk about your experiences of collaboration while creating At Twilight, as well as your references to the collaborators Yeats worked with, whom I understand you have represented in the show through Noh masks?

SS: Yeats assembled an impressive team to realise the play. Key to it all was the émigré dancer and choreographer Michio Itō, who was the only person involved to have actually seen a Noh play. The costumes, masks and staging were all designed by the French émigré illustrator Edmund Dulac, who also wrote the music. As well as introducing Yeats to Noh, Pound had a peripheral role as stage manager for the first performance of the play at Lady Cunard’s house in Cavendish Square, London.

Just as Yeats was dependent on his collaborators for the realisation of At the Hawk’s Well, At Twilight was only really imaginable as a collaboration with people with theatrical knowhow. The involvement of Graham Eatough, a theatre-maker in Glasgow, was crucial. It was a hugely productive partnership, extraordinarily symbiotic and seamless – a real treat. From the outset, we both seemed to be on the same page and, in fact, the play that emerged is, in part, about our collaboration, and sits somewhere between his world and mine, part full-blown theatre production, part artist’s talk. The two actors who play Yeats and Pound also play myself and Graham as we attempt to orchestrate the different layers of the story. I’ve learned a lot, and I suspect Graham has too. This self-reflexive aspect of the play is, of course, very much in keeping with my practice as a whole, with works that are often predicated on interrogating their own making.

AB: Your work to date could be termed as performative, in the sense that it relies on action and stages of process for the work to be created and completed. Is At Twilight the first time that you have worked directly with performance in the context of theatre?

SS: I did stage a piece of puppet theatre a few years ago that had certain connections to At Twilight, but, yes, this is the first full-blown piece of theatre I’ve made. In many ways, I’ve always had a strained relationship with theatre, finding that its modes and manners didn’t rhyme with my own ways of telling stories. At Twilight is, however, a very logical outcome of a body of work that began with Project for a Masquerade (Hiroshima) in 2011.

AB: The show is your solo institutional debut in New York City. Are there any particular feelings or concerns that arise when you are debuting your work somewhere?

SS: I’ve made many solo gallery shows in New York, shows that have been very important to my career, but an institutional context is always a little different. In this case, I think I am the second non-Japanese artist ever to show at the Japan Society and when working on an explicitly Japanese subject, the legacy of that most rarified and traditional of Japanese arts, Noh theatre, there is always a sense of trepidation. The project has at its core the notion that a little knowledge is a powerful thing and too much knowledge can stifle creativity, which was certainly the case with WB Yeats and his foray into Noh theatre in 1916, but could equally apply to me, 100 years on, feeling my way through this complex web of cross-cultural exchange and mistranslation. It’s also important to stress that the Japan Society exhibition is a collaboration in many ways and it’s good to have colleagues in such instances. Choreographer Javier de Frutos plays a major role in the exhibition as he reimagines the central Hawk dance from Yeats’s play. The wonderful Tokyo-based costume-maker Kumi Sakurai and the Osaka-based Noh mask-maker Yasuo Miichi have both contributed wonderfully to the look and feel of the exhibition, as have a number of collections and institutions that have loaned major works by the likes of Jacob Epstein, Henri Gaudier-Brzeska and Constantin Brâncuși that contextualise that 1916 avant-garde moment. In short, I’m in good company. 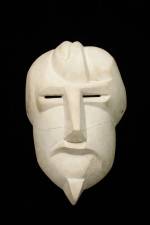 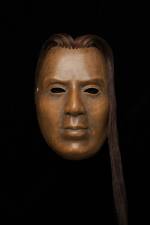 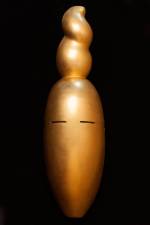 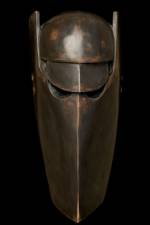 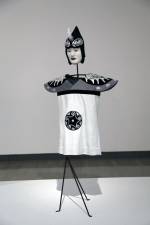 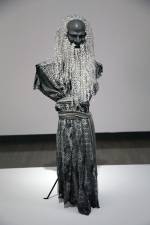