Sean Edwards discusses growing up in a community with low expectations and expressing the most honest version of self as an artist, through his multi-media Wales in Venice installation Undo Things Done

For his Venice Biennale installation Undo Things Done, Sean Edwards (b1980, Cardiff) has used the simple, sculpted spaces of Santa Maria Ausiliatrice – a former church now given over to education – to evoke the boundaries and forces that constrict and support us, that nourish and deprive, within the particular context of experiencing poverty and marginalisation within a Welsh community. He says that, while making the work, he had two phrases in mind: “The phrase of ‘not expecting much’ … as a way of living for a great deal of the population in Wales, the UK and globally. And also an idea of ‘the most honest version of yourself’, which is a Fassbinder quote I came across through the work of Moyra Davey (b1958), the Canadian artist, and how by putting the most honest version of yourself into the work you might create a greater resonance for the viewer.” 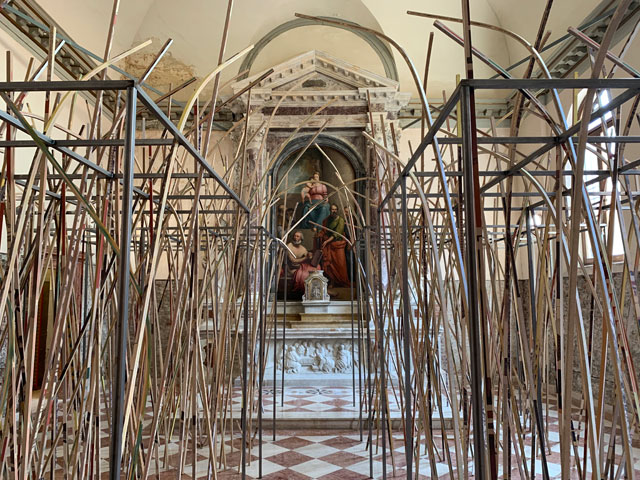 Indeed, he has. The aisles of the church are filled with slender MDF poles, their stems clearly components of a larger, printed whole, grouped within simple steel cages on either side of the aisle. While talking with Edwards, the animation and individuality of this silent congregation strikes me with all the force of my own years of childhood, subjugated into idleness during Sunday mass. What this conjures up for those of us raised Catholic in the UK – where Catholicism has been a denigrated minority religion ever since Henry VIII’s Reformation – is in stark contrast to the experience in Italy, where it is the universal norm. That contrast is quietly, deliciously palpable here, in a country from whom all Catholic authority and power has emanated down the centuries.

“I approach making sculpture… as something that has time inherently bound up in it, in the experience of making it but also viewing it”

Into this eloquent sculptural setting, at 2pm every day (except Monday) Edwards brings the voice of his mother, live from Cardiff, where she performs a radio play comprising elements of her own upbringing (she was raised in a Catholic orphanage in Northern Ireland) collaged with found text. The “confessional” screen that lines the entrance to the church comprises digitally cut wooden panels punctured with the repeated word “un” – a powerful prefix in itself. Edwards says this logo emerged from his family’s obsessive attitude in his childhood to the Sun newspaper – a vehicle for rightwing populism, even before it was owned by Rupert Murdoch. It was forbidden in his leftwing household, though he became a regular reader when he moved to London. 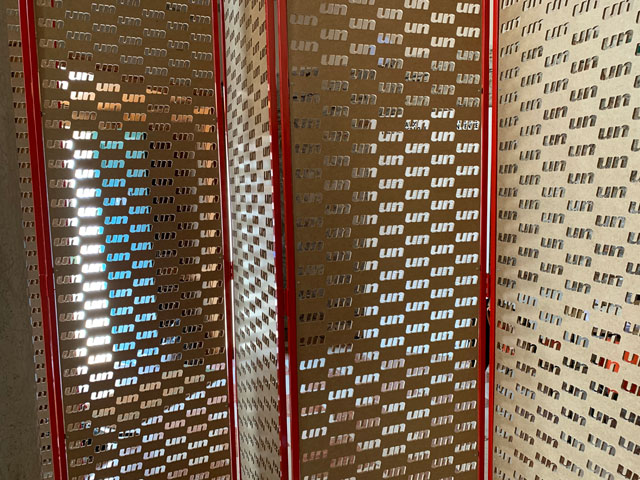 “It’s something that is inherently bound up in class, the Sun newspaper, bound up in many issues that we’re dealing with today - Brexit, things like that,” he says. “But, equally, it becomes something about that idea of a confessional, in relation to Catholicism in the private confessional, and the confessional in relation to tabloid journalism and the ‘tell-all’.” The screens are framed in the same red as the Sun’s traditional masthead, and the “un” and the “S” appear farther on in the installation, in a series of beautifully crafted Welsh quilts. 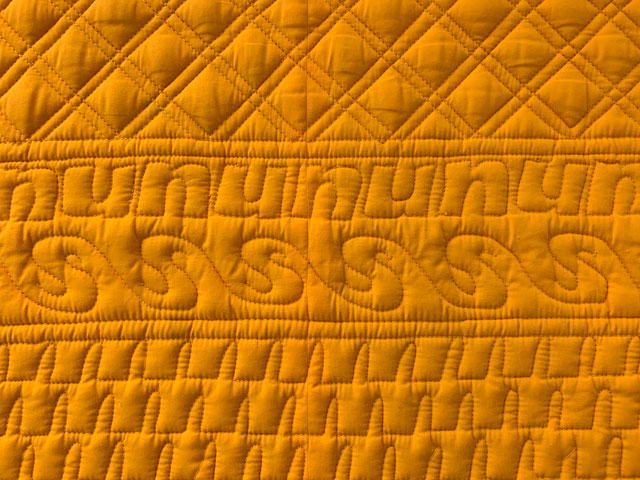 Having brought his mother into the chapel, he brings his father –largely absent from his upbringing and sadly recently deceased – into the adjacent room. Apparently, whenever his father did visit, he would enjoy a game of dominoes with Edwards’ grandfather. Edwards has filmed well-used domino pieces being shuffled on a glass table to evoke that familiar childhood noise. 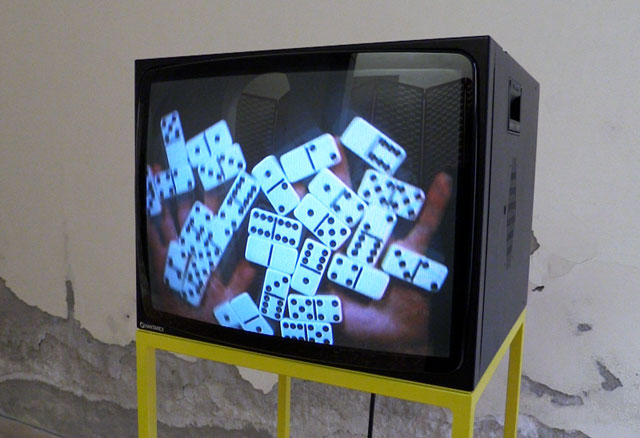 Edwards is interested in articulating the stories of what he calls the “underclass” to which his father belonged - the long-term unemployed - and the social and economic stigma that carries for family members within the wider community. He has exhibited here a framed (in signature Sun masthead red) poster in Sun headline typeface: Free School Dinners. In his Cardiff school, he says, those entitled to free school meals had to stand in a different queue from those whose parents could afford to pay – a further stigmatisation. 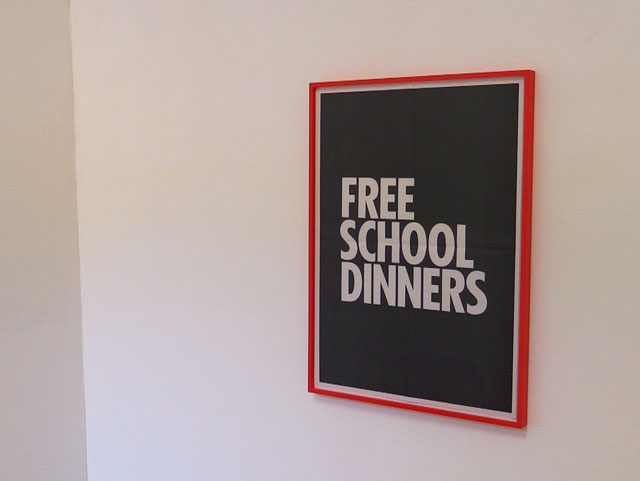 But poverty also brings community, and a continuity of tradition, as he seems to declare, more optimistically, in the penultimate room. Here, a series of Welsh quilts, (the Welsh versions are always, says Edwards, monochrome, with decorative detail coming from stitching) is hung, like washing, in a sun-dappled room. Their motifs, which traditionally deployed shapes formed around household objects, also borrow from the symbolism and typology of the Sun newspaper. Finally, a blown up photograph of his bitten nails dominates the last, small room – his tribute to a habit he says he inherited from his mother (who has now cured herself). Edwards feels this enormous image of his raw, ruined fingers says much of the addictive, compulsive tendencies that have been passed down to him, raising the issue of whether it is passed on through nature or nurture.

Edwards’ studied for his BA in fine art at the University of Wales Institute (2003) before going to the Slade in London to complete his MA. His multimedia practice explores the poetic expression of personal and political issues through the specifics of a given place. He came to attention in 2011, with Spike Island, his first major show in a public space. Based around the Maelfa shopping centre on the edge of Cardiff, close to the housing estate where he grew up, the project brought elements of the centre into the gallery. A classic example of failed retail-led regeneration, (the shopping centre was never fully occupied). Edwards drew on the writings of Robert Smithson, to depict it as “a ruin in reverse”. He conjured the shopping centre with large photographic prints of fragments of the interior, with sculptural elements that evoked shop windows, and with a film that slowly tracked through the centre’s covered arcades.