One of the most infamous YBAs returns to London and Sadie Coles with an exultant, expressive refinement of a seminal sculptural series 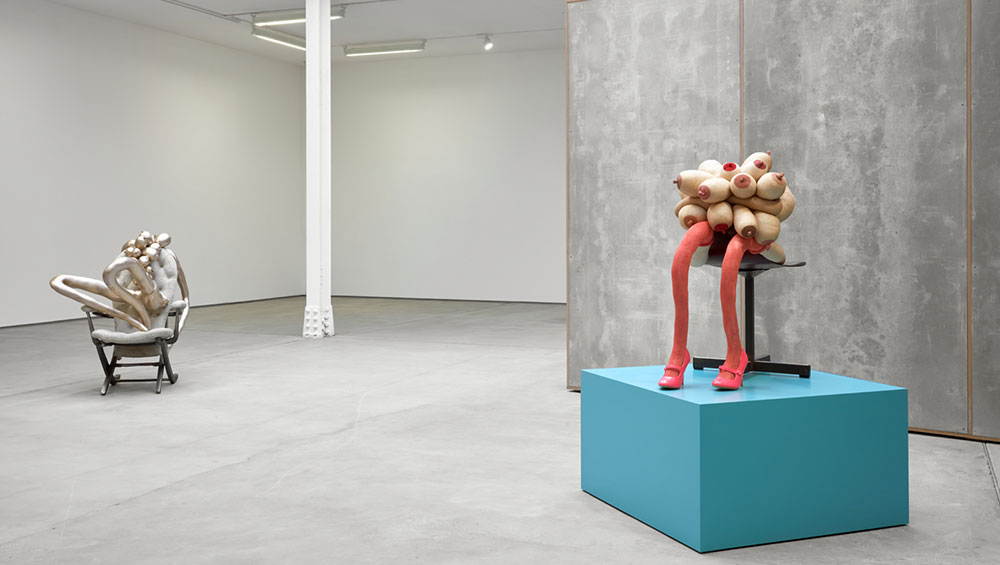 My visit to Sarah Lucas’s Honey Pie, in the cavernous Soho branch of Sadie Coles HQ, feels like a return to an old friend – and not just because of the delight of returning to a gallery after months of lockdown. Originally slated for March, the exhibition was one of many to be halted by the pandemic on the cusp of opening, after a round of promotional interviews. It marks Lucas’s first UK show and first exhibition of new work since 2016: a long break for an artist who, a decade ago, seemed a ubiquitous presence in London. Finally, it represents the turn of one of Lucas’s best known, sporadically visited series: the Bunny sculptures, ambiguous, but certainly anthropomorphic, figures created from stuffed tights and attached to miscellaneous chairs. 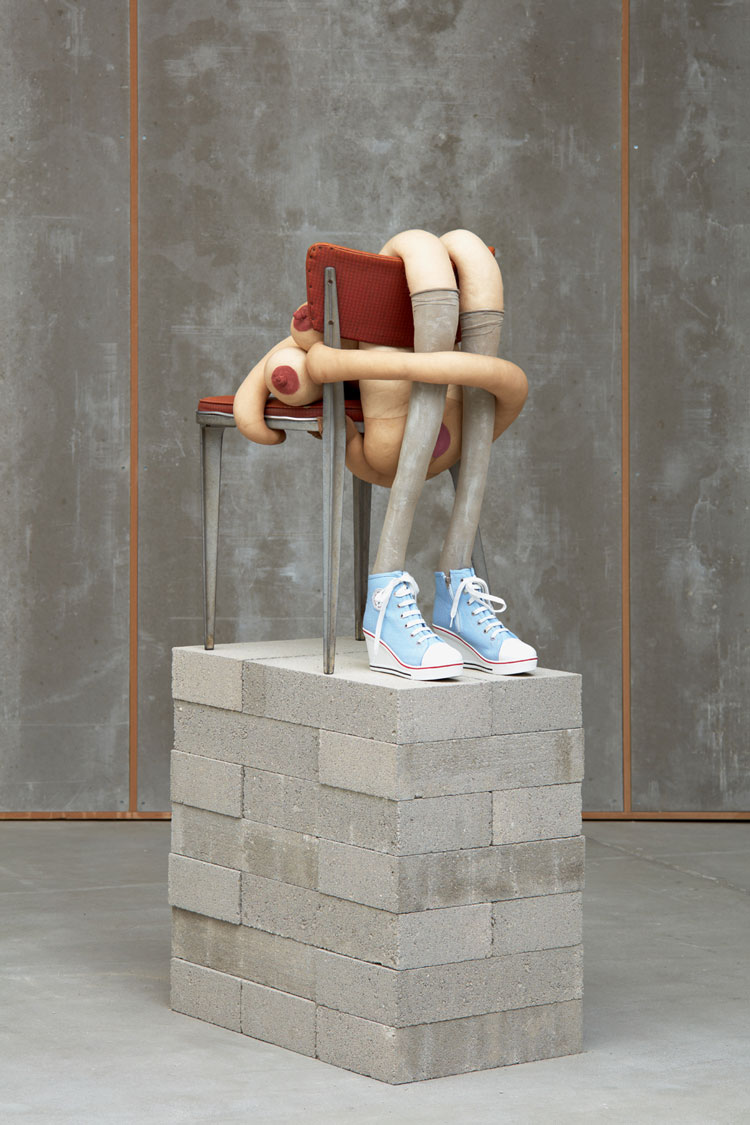 The bunnies made premiered in Bunny Gets Snookered (1997). There, eight mannequins of wool-stuffed tights sat atop and around a snooker table, their elongated feminine forms contrasting with the table’s stage for masculine skill. Clad only in stockings, these abject, spent beings sat recumbent. Sometimes, their backs appeared to fuse with the chair itself, blurring the line between living human and intimate object. Each wore a different colour of stockings, echoing the ranked colour of snooker balls, but was otherwise grey. The word “snookered” – the state of being unable to play a round in snooker, more generally used to mean “left in a difficult position” – also carried a whisper of violation, of something unspeakable done with a cue. In 2009, the Bunnies spun off into Nuds, sculptures made from tights, resting on plinths, in knotted, intestinal forms, pink lumps of flesh redolent of Francis Bacon or Philip Guston. 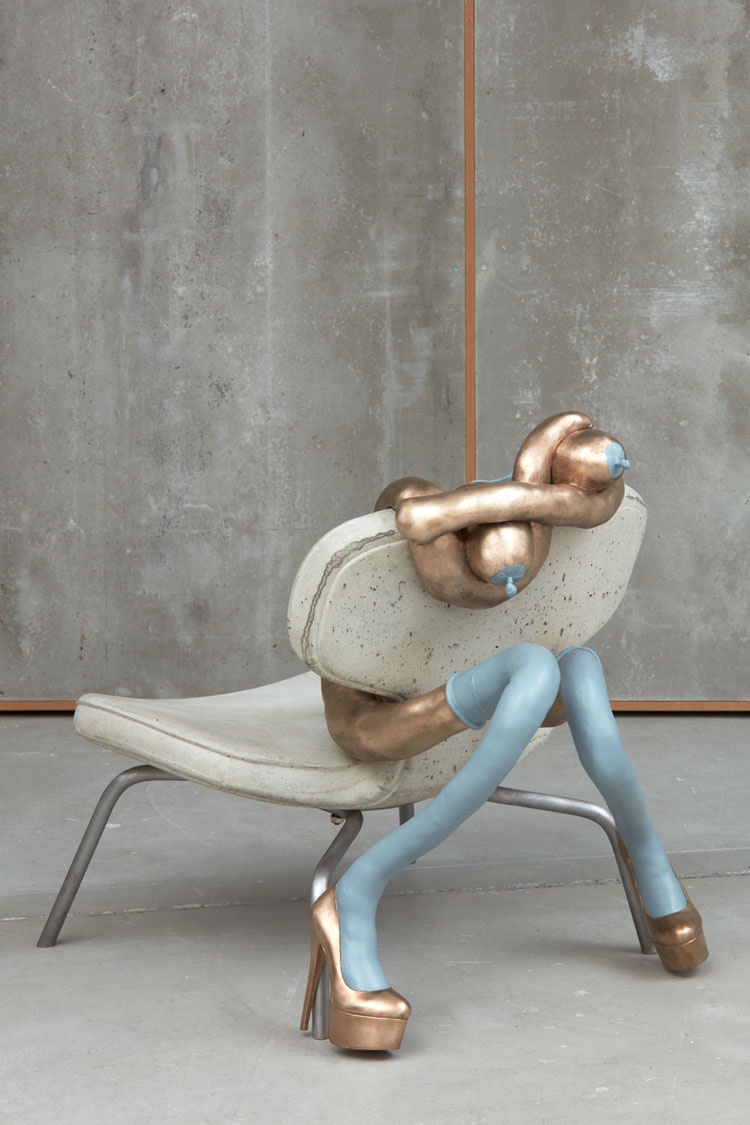 Honey Pie – also the name of one of the sculptures in the exhibition – is closer to the earlier bunnies. But Lucas has made some changes. For one, five of the 13 present are cast in bronze and placed above concrete chairs, turned from sprightly soft sculpture into hardened monuments. Those that continue to be made from tights, meanwhile, have evolved to match the contortions of the Nuds, twisting and twirling into odd new positions. Some appear to clutch open their shapes for dear life, others are whorled as if posing for one of the more insalubrious sorts of photoshoot. They have also become more chic, clad in powder-blue Converse and baby-pink booties, clamped to chairs that are less junkyard and more mid-century modern. Instead of the snooker hall, they sit in minimalist rooms divided by concrete walls, refined, albeit adorned with suggestive white splatters. 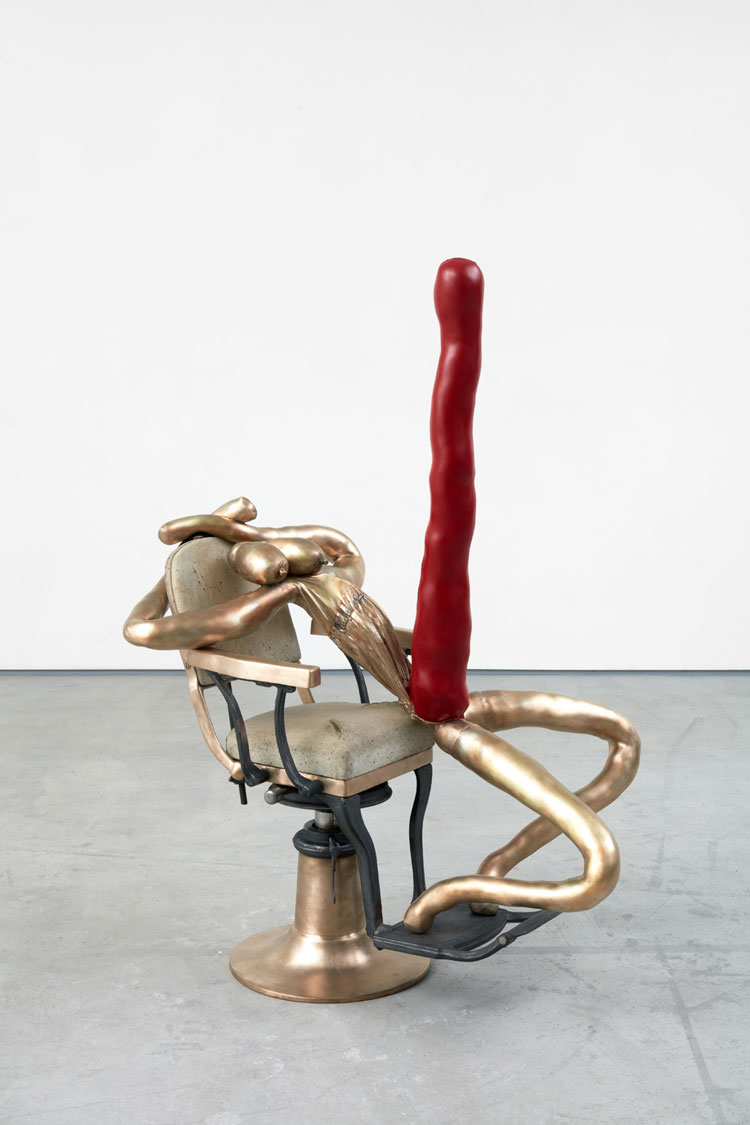 Perhaps the most significant shift is that some of these bunnies are not straightforwardly female: the bronzes Elf Warrior (2018) and Dick ’Ead (2018) both have thrusting members that tower above their torsos like totems, their relative straightness a structural counterpoint to the sinuous coils and bulging breasts below. The Snookered bunnies seemed worn victims of a patriarchal order; these new creations are more exuberant and open in their humanity. They exult in their own bodily protuberances, even as they gesture towards the grotesque, and sit clamped to their seats. There is also something exultant in Lucas’s shaping of her extra-strong tights, a patience with and affinity for her materials, whether malleable fabric or firm metal. 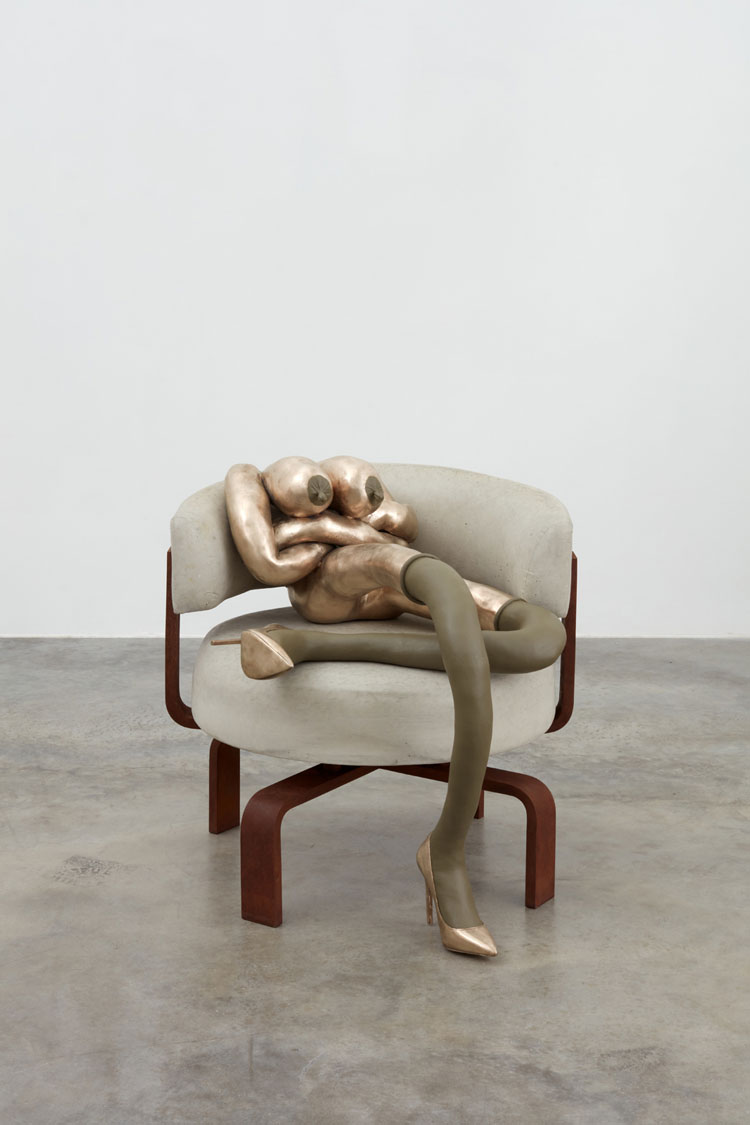 For all this ease, there remains the shadow of voyeurism, as if we have stumbled across these beings at their most vulnerable, sitting in private chambers, conversing which each other, but not with us. What the Bunnies do not do is shock. Lucas emerged as a Young British Artist, part of the generation that brought the shock of the new to a traditionalist art scene. Besmeared beds, flies murdered in glue, gaping wounds blown up to gargantuan scale, genocidal massacres carried out by toy soldiers: much of the YBA’s early notoriety stemmed from puncturing Britain’s persistent prudery and conservatism, traits that had consigned its art almost to irrelevance in the preceding decades.

Lucas once seemed to belong to this rupture. In seminal early pieces such as Two Fried Eggs and a Kebab (1992) – in which the eponymous foodstuffs represented a reclining female nude – Lucas appeared to mock both British squeamishness around real-world nudity and the double standard allowed for artistic representations of the female nude. Two years later, Au Naturel (1994) combined fruit and a bucket to depict the sexual organs of a man and a woman lying on a bed. While many of her contemporaries seemed content to provoke, Lucas’s work served to problematise the existence of prudishness itself, exposing, in particular, its relationship to misogyny. The works in Honey Pie seem a celebration of the freedom that might lie beyond such prejudices. 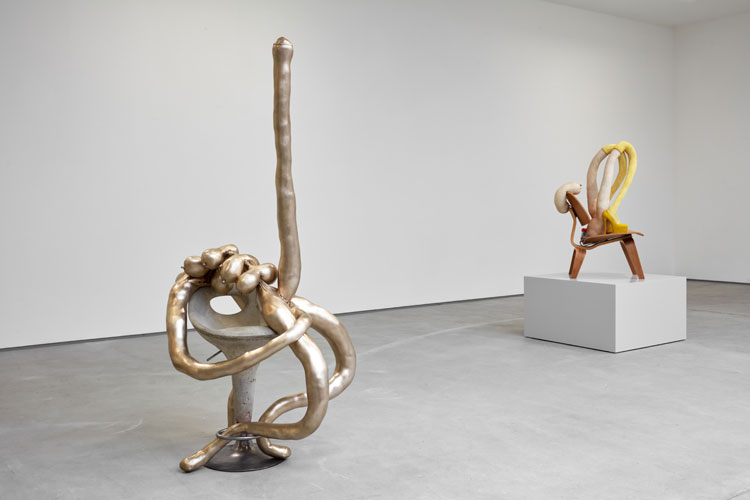 They also reaffirm Lucas’s position as perhaps the major international artist of the YBA generation, as also demonstrated by a recent full-bore retrospective at New York’s New Museum. She fits into the annals of contemporary art history in a way few of her contemporaries have managed. This would have come as something of a surprise in the 90s, when Lucas seemed among the most regionally specific of the new guard. Her pieces continuously evoked a demotic southern Englishness, compounded from Carry On films, Viz comics and red-top headlines, and set within cigarette-stained pubs and greasy spoons.

The first bunnies may have resided in a snooker hall, but their descendants at Sadie Coles HQ are jet-setting citizens of the world. The legacies of international modernism course through their veins: the uncanny dolls of Hans Bellmer, the household debris of Edward Kienholz, the soft sculptures of Dorothea Tanning and Louise Bourgeois, the furniture-art of Franz West, and much more besides. As fitting for an artist whose abiding concern is something as universal as the human body, nothing about them – not even their name, which immediately evokes a certain recently discontinued American magazine – is provincial. In their serpentine bends and bulbous ends, clad in their fashionable apparel a placed atop their sleek corporate seats, these bunnies come from everywhere, and exist for everyone. 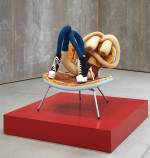