This immersive installation documents Sierra’s provocative planting of black flags – symbol of the anarchist movement – at the north and south poles, opening the way for a timely discussion on borders and freedom of movement 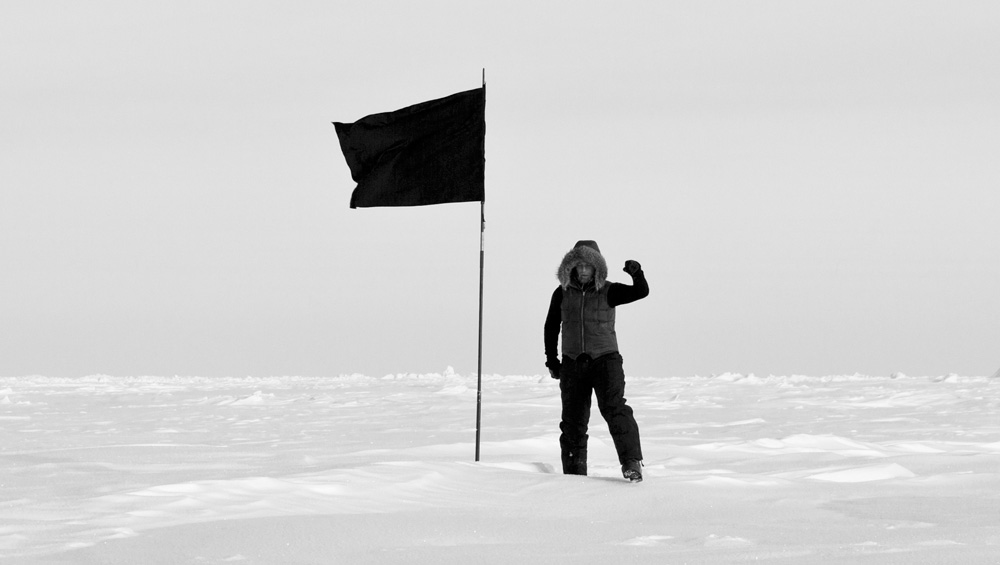 As Santiago Sierra: Black Flag runs at Dundee Contemporary Arts Centre in Dundee, its themes are in the headlines: issues around borders, freedom of movement and, of course, Brexit. The vision of an independent Scotland inspires optimistic marches around Dundee, just after the show’s opening weekend; and over the Irish Sea, the potential of a reinstated Northern Irish border provokes an understandable sense of dread and anxiety. How to begin to talk about some of the biggest issues of our day, which at times seem so overwhelming and disparate as to be impossible? How to capture a sense of their global implications, in an intimate, communal space? 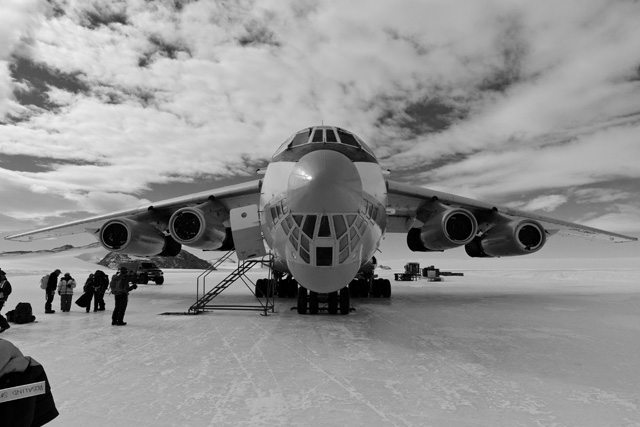 The DCA’s presentation of Black Flag, the UK premiere of Spanish artist Santiago Sierra’s ambitious project, manages to carve out such a space and articulate many of the key ideas that define these political issues. Showing photographic documentation of his expeditions to the north and south poles, and the planting of the flags, as well as a replica black flag and pressed vinyl records that lay field recordings of “silent moments” from both poles, the installation is an understated and yet immersive experience. The project is a collaboration between Santiago Sierra Studio and a/political, a nonprofit organisation that works with artists concerned with sociopolitical issues, and the exhibition essentially reproduces Sierra’s missions so as to open a peaceful and constructive discussion about the way our world is structured and controlled. 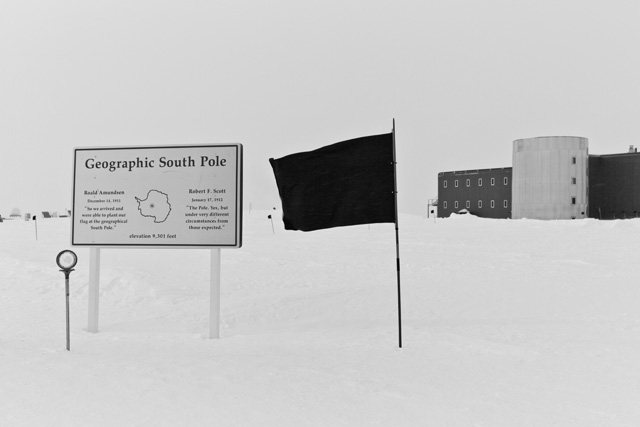 Indeed, simply by presenting the act of planting black flags – a powerful anarchist symbol – the installation suggests that the various issues we face today are symptomatic of a world order that may seem inevitable and natural, but is not. Whether or not one believes that anarchism, the dismantling of such borders, holds the solution to the complicated legacies of colonialism and imperialism that have resulted in global disarray, Black Flag nevertheless opens a conceptual space to question that and other potential solutions. Running a series of events alongside the exhibition – such as a brilliant Q&A session between the artist and the anarchist theorist Uri Gordon, a “performative deconstruction of Black Flag” by the artist Nine Yamamoto-Masson, and a lecture by Dr Claire Warrior, senior exhibitions curator at the National Maritime Museum in Greenwich, on the act of planting flags at certain moments in history – such discussions about nationalism and territory are further formalised, defined and encouraged in a receptive and intelligent manner. 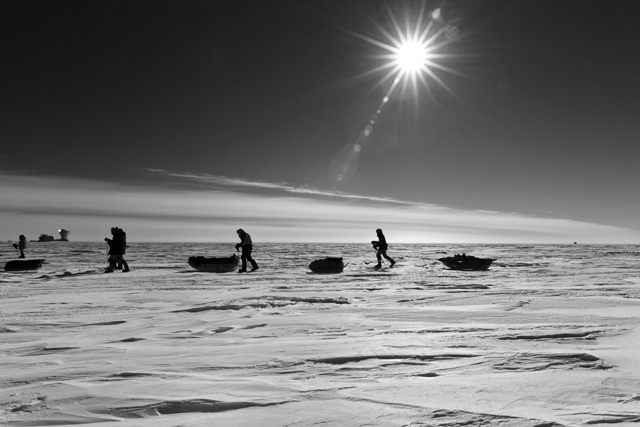 The atmosphere of the exhibition, in itself, offers a contemplative and relaxed environment where such theorising and discussion may happen. The black-and-white photographs of the expeditions, alongside the recordings of “silent moments” offer a sanctuary from the chaos of politics and a distillation of the concepts at their centre. Black Flag is not simply the documentation of an anarchist gesture, but a multifaceted and thorough exploration of a global practice and the hierarchies it represents, all the while managing to remain detached and inclusive rather than didactic. In contemporary society, it is often hard to see how people can become truly involved and engaged in politics, other than through direct action, but here we see how the contemporary art gallery has carved out a space for that participation and critique, where other institutions in society have not. 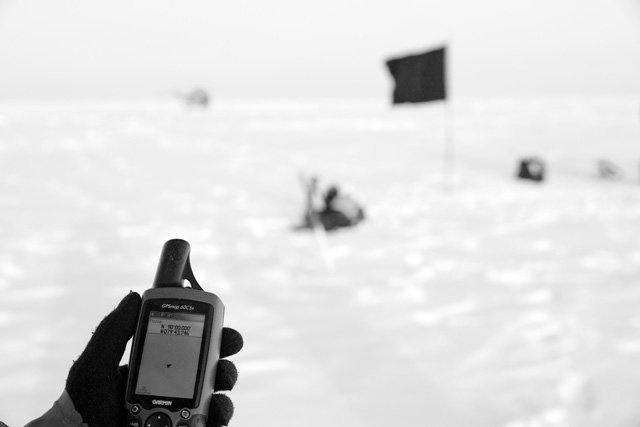 Black Flag also connects a globally relevant critique and exploration with the city of Dundee itself, highlighting the international links we all partake in, whether or not we realise it, and specifically the links of this city to polar exploration, merchant shipping and colonialism. Only minutes away from the RSS Discovery, on which Captain Scott sailed to Antarctica, as well as the newly opened V&A Dundee, which resembles an ocean liner or a cliff face depending on one’s perspective, this, like many cities on this cluster of islands, is familiar with naval exploration and tales of conquest. Perhaps due to this sometimes mythologised history, we take for granted the power to travel the world and trade freely with it. Sierra, in his own symbolic occupation of the poles and in a way, therefore, the whole world, deconstructs that idea, that assumption. 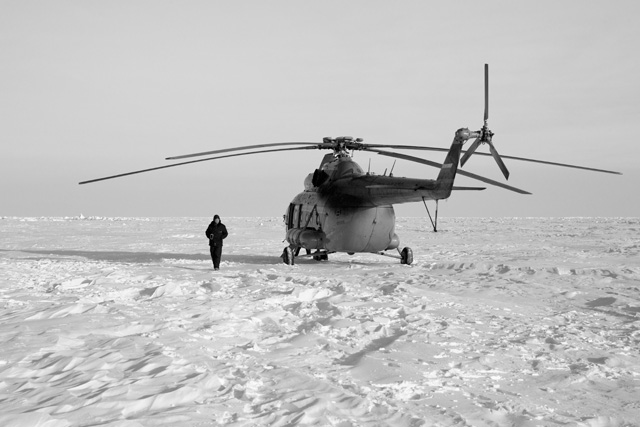 We presume the right to travel and live freely, at least on a hypothetical level, but, as Sierra points out, the reality is very different, and very much defined by one’s place in the world and one’s own society. “Entering a country is like going to jail,” he said recently, and trying to enter others can be like trying to escape a prison, too. While Black Flag is a peaceful and relaxing space to visit, and frees up discussion, its underlying point is more worrying. Sierra may have planted his black flags freely and relatively easily, but he is open about the fact that it was only so because he (or rather his team) went there as “elite tourists” do, by chartered helicopter. Symbolically, he occupied the world – but mainly to point out that we are not all so free. The right to travel and move around is not granted to everyone. We are more trapped – in the hierarchies and structures of our own and other societies – than we realise, and given the various political issues in our midst, we may well become even more so. A sobering thought, yes, but revealed in a space that at least steers its inhabitants towards ideas that may free us.