Alicia Kopf: ‘My idea is to appropriate polar history to a present-day story of survival’

Alicia Kopf: ‘My idea is to appropriate polar history to a present-day story of survival’

Catalan artist Alicia Kopf has won acclaim for her novel Brother in Ice, which sits at the pinnacle of a cycle of artistic projects about the Arctic and the Antarctic. Here, she talks about her own epic story

The Catalan visual artist and writer Alicia Kopf (b1982, Girona) has been recognised as a great talent in world literature for her first book. Brother in Ice is a hybrid novel, with research notes, a fictionalised diary and a travelogue, drawing parallels between polar journeys and the protagonist’s coming-of-age story as an artist, a daughter and sister to a brother who has autism. The book is the culmination of a series of artistic projects called Àrticantàrtic, including the exhibitions Seal Sounds Under the Floor (2013) and Diary of Conquests (2014).

The work draws inspiration from the heroic era of polar exploration in the early 20th century, when Robert Falcon Scott and Roald Amundsen raced to reach the south pole. The novel tells the story of the American Louise Boyd’s pioneering flight over the north pole. With her first solo exhibition in Barcelona, Kopf won a GAC-DKV Award for the best exhibition by a young artist, and she has received accolades for Catalan and Spanish publications of the novel, including the Premi Documenta and Premi Llibreter literary prizes, and the Premio El Ojo Crítico, awarded by Spanish national radio. Here, Alicia Kopf (a pen name for Imma Ávalos Marqués) talks about her artistic work and its real-life inspiration.

NH: How did the topic of polar exploration come about in your work as a visual artist and a writer: can you talk about a specific jumping-off place?

AK: Yes. It was when the 2008 recession started. I had just finished my studies and I was trying to make a living, not only as an artist but as a regular person. I started to dream a lot about ice, so I began to do research about it. The journals of the Antarctic explorer Ernest Shackleton came into my hands. I was in love with the pictures by the Australian photographer Frank Hurley of Shackleton’s ship, the Endurance that was trapped in the ice. I was impressed by the epic stories of this polar exploration, which for me were not only very masculine but had a metaphysical quality. I wanted to appropriate this epic journey into a contemporary context. As a young woman living in a precarious situation, I wanted to mirror my reality and to give the prestige of these adventures to regular families struggling in difficult times as they try to survive and discover that the ice is not only outside but also inside. There is ice in relationships between people. 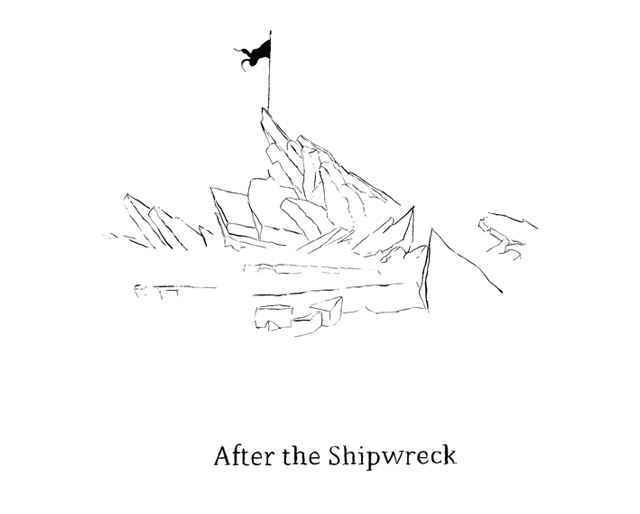 Alicia Kopf. After the Shipwreck, an illustration from Brother in Ice, English edition, 2018.

NH: I would like to talk about your series of artistic projects called Àrticantàrtic, which you made over four years while writing your novel Brother in Ice. As part of this series, you held an exhibition in Barcelona in 2013, entitled Seal Sounds Under the Floor. How has your visual art practice shaped your creative writing?

AK: It is an important combination for me. I start my work by following my visual intuition. I see images as metaphors of something compelling. When I’m interested in a specific image, I do visual and scholarly research. In the case of ice, I was drawn to the heroic era of polar exploration, because it was a time when explorers did not use any machines: it was man against the landscape. I narrowed the research, I did some historical exploration and I wrote. For me, doing visual art practice and writing are different yet complementary ways of thinking. Images are very synthetic and intuitive, whereas language is more logical and linear. I find that images are messages from my unconscious mind. I can play with them in a non-logical way. Language is the way in which I unfold these messages and create new narratives, to construct new realities, which is my ultimate purpose in my work.

An illustration from Brother in Ice, Spanish edition, 2017.

NH: On the topic of language, this summer, Brother in Ice has been published after your original text was translated from Catalan into English by Mara Faye Lethem. Can you talk about the creative process of translation: does the use of a new language offer any fresh perspectives on your original work?

AK: Yes. I write in Catalan and translate myself into Spanish. Sometimes I even write in both languages at the same time. After I finish, I translate the bilingual book into a one-language book. The process of translating the text gives you new perspectives on it and makes you look carefully through each sentence. For me, doing a translation is the best way to proof a text. In the case of the English translation, I worked closely with Mara Faye Lethem. English is an appropriate language for this kind of work, because it is a book about something very sharp, which is ice. It is transparent, sharp and creates constellations in the form of snowflakes. For me, the language has sharp words and it is easy to create new concepts with it. I was glad that Brother in Ice was translated by her. 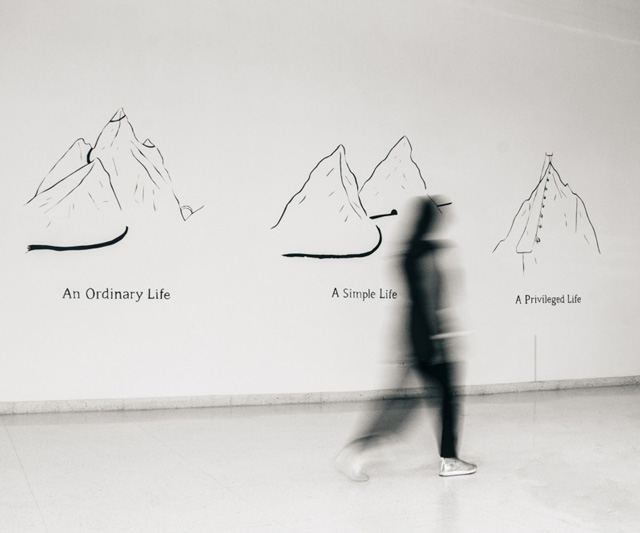 NH: English is a world language that brings your novel to many readers, so that is great. Next to the protagonist’s own story, the novel features journeys of polar explorers, from Ernest Shackleton’s remarkable escape from the Antarctic to the San Francisco heiress Louise Boyd’s pioneering flight over the north pole. What do you find so compelling about these frozen white places of the Earth?

AK: The most interesting thing about polar exploration is that it has become a rich imaginary. There were journals of explorers, pictures and stories about this in the late-19th and early 20th centuries. The polar imaginary is related to the creative task. In my work, I wanted to keep ice as a metaphor, but found it useful that so many people had visited these white places. I loved the character of the Canadian pianist Glenn Gould, who made a radio documentary about people who had been to the north pole. I discovered that there is a brotherhood or a sisterhood of people who are fascinated with this idea of the north. Although these white places seem like deserts, they are full of things that resonate in daily life. My idea is to appropriate polar history to a present-day story of survival.

NH: With its mix of travelogue and memoir, exploring themes of art and nature, Brother in Ice evokes the literature of the German author WG Sebald. Is he among the writers who have been particularly influential on your work?

AK: Yes. Before writing Brother in Ice, I read The Rings of Saturn, Austerlitz and Vertigo by Sebald. I was very impressed by how he presented first-person narratives with his stories and landscapes. He also used images in a non-illustrative way. Maybe the content of my story and the way I am as a writer is different from Sebald, but he is definitely one of my references. I admire him very much. 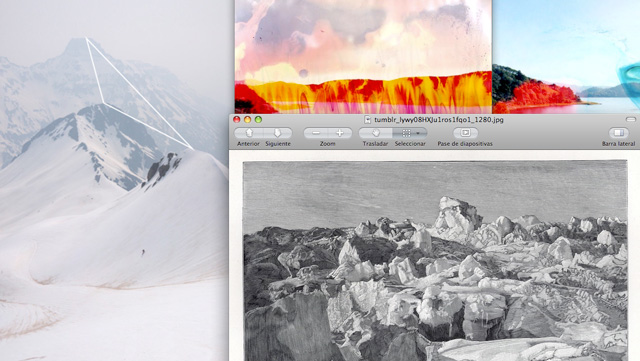 NH: Could you tell me about any other writers or artists who have been particularly influential on your work?

AK: I try to quote many of the influences of my work inside the story. It is quite intertextual.When I was starting to think about Brother in Ice, I loved the work of the Catalan film-maker Albert Serra and the English writer Philip Hoare, who wrote Leviathan, or the Whale – it is very magnetic. The Spanish writer Enrique Vila-Matas, who explores the idea of auto-fiction, has inspired me to be very free in the way that I write. In Brother in Ice, I quote the American author Jonathan Franzen. I have read the works of the French writer Marguerite Duras and the Russian-born novelist Irène Némirovsky with great admiration. When finishing the novel, I discovered the Norwegian author Karl Ove Knausgård. I adore him for how he portrays daily life in such an honest way. The author gives you the impression of taking you close to reality in the sense that he portrays people without sentimentality. I admire him for his courage in writing like this.

NH: Finally, I would like to talk about how your novel’s central character explores the role of the artist in contemporary society. As the narrator comes of age as an artist, she confronts a harsh reality after the 2008 recession. Yet as a writer, you have achieved success against the odds. Do you have any words of advice for young artists who may be working in a difficult climate today?

AK: I can talk about what I hope will be useful. For me, the key is to be courageous with your possibilities, your practice and your environment. I trained as a painter, but after the recession, I knew that with my Spanish context, it would be impossible for me to sustain this pictorial practice, economically. Yet I loved to write and draw and could do it with a pencil and paper. So, I created a simple life with a basic income from another job. I concentrated on what I wanted to communicate in the most economical way, which was drawing and writing. The world will not give you recognition first. You have to win recognition for your work. You have to be very honest and do what you love. Also, try to be aware of the artistic tradition, and to ask, what can you add to that? The most important thing is to try to be courageous, and to make things in a simple way, which will give you possibilities to concentrate on what you have to say.

•  Brother in Ice is published by And Other Stories. Alicia Kopf will be at the Edinburgh International Book Festival on 25 August 2018, in conversation with the Canadian writer JR Carpenter