When punk music emerged in the mid 1970s, a vibrant, cheeky subculture grew to amplify the message in art, literature, film, and most visibly fashion. To this day, punk and its many variations make up a large slice of popular culture and commerce. Punk's influence on fashion designers is the subject of the 2013 spring/summer exhibition at the Met's Costume Institute, which begs the question: Can an anti-fashion movement rooted in a DIY aesthetic retain its edge when co-opted by high fashion designers who function in the upper echelons? Featured designers include the legendary Malcolm McLaren and Vivienne Westwood, Zandra Rhodes, Rei Kawakubo of Comme des Garçons, Alexander McQueen, Gareth Pugh, John Galliano, and Christopher Bailey for Burberry. 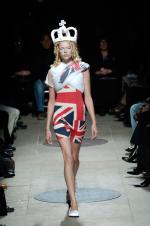