The Dark Side of Love. Alexander McQueen: Savage Beauty

The Dark Side of Love

For English fashion designer Alexander McQueen (1969–2010), “concept” and “performance” were the main draw cards of heading his own fashion house. In the history of fashion, McQueen stands as the most conceptual of designers, while his superb tailoring skills ranked him among the few technically gifted. In interviews, McQueen said that early in his childhood he became determined to work in the fashion industry. But in many ways, he was an accidental couturier. His genius extended beyond clothing to stage design; as a dramatist, he created mesmerising narratives with leather, wool, silk, metal, feathers, lace, beads, embroidery, appliqué and other, quite unusual, materials. Above all, McQueen was a fine artist whose work came from the interplay of his biography and imagination.

McQueen’s elaborate fashion shows never failed to shock and amaze his audiences; not merely for the audacity of his clothing, choreography and sets, but for their social and political implications. He remained on the firing line with ardent feminists, who were offended when his models, looking battered and bruised, paraded in torn clothing (Highland Rape, autumn/winter 1995–1996), or when he shackled a black model into a steel cage and directed her, so-encumbered, to walk down a runway (La Poupee, spring/summer 1997). With every collection – from the 1992 Jack the Ripper Stalks His Victim, designed to complete his master’s degree at Central Saint Martins College of Art and Design, through his incomplete fall/winter 2010 Angels and Demons (16 samples shown posthumously in Paris early in March 2010) – McQueen immersed himself in ideas, themes, historical research and creative tangents. Anyone who followed his work would soon learn of his admiration for Shakespeare, obsession with film (Hitchcock’s The Birds, Francis Ford Coppola’s Dracula and Tim Burton’s work, for instance) and commitment to the Romantic ideal.

Before his suicide on 11 February 2010 (just over a week after his mother died from cancer), McQueen informally referred to what would be his last body of work as “Angels and Demons”. Like the formal titles of his previous collections (eg The Dance of the Twisted Bull; It’s Only a Game; The Girl Who Lived in the Tree; Plato’s Atlantis), McQueen’s reference to angels and demons incites curiosity and an eagerness to connect the designs to his sources (in this case, medieval and religious costumes, as well as his inner conflicts). The McQueen web site (www.alexandermcqueen.com) has an excellent “Fashion Archive” section, illustrated with videos of the shows, which surveys collections from 2002 to 2010 for theme, content and influences (ranging from Ancient Egypt and Darwinism to the Salem witch-hunts and Baltic folkloric dress).

The web version of the McQueen Fashion Archive functions better as a retrospective than the current, attendance record-smashing Alexander McQueen: Savage Beauty display at the Met’s Costume Institute. Prefaced by the Institute’s annual celebrity-laden benefit gala, held this year on 2 May, the exhibit is more of a finale or coda to a brilliant man’s equally brilliant career. Met curator and catalogue author Andrew Bolton worked with McQueen’s closest associates, including McQueen’s longtime collaborator and successor Sarah Burton, to portray the McQueen mystique for thousands of visitors who are braving shoulder-to-shoulder crowds to catch mere glimpses of the 100 examples on his work artistically arranged in the galleries. Media coverage has put the show at the top of tourists’ “must-see” list. These intrepid pilgrims appear to have much more patience for wading through a crowd than New Yorkers. The push-and-shove that is typical these days at the Met leaves one wondering if it is better to be short (so as to dodge through the crowd at ground level) or tall (to reach over the sea of heads blocking access to McQueen’s exquisite garments and accessories).

The press has focused on the gala, which was graced by the presence of such McQueen devotees as Lady Gaga and Daphne Guinness and friends like Stella McCartney, whose company and McQueen’s are part of the Gucci group; and on the dress that Alexander McQueen head designer Sarah Burton designed for Kate Middleton’s wedding to Prince William. It would be difficult to find someone who hadn’t heard the name McQueen in the past few months. So, as a result of a literal stampede of ticket buyers, the show has been extended through early August and the Met will open its doors on Mondays, its one day of rest, to people who want less competition for a fair chance in the galleries and are willing to pay the $50 entrance fee.

The experience of moving inch by inch to a soundtrack of moaning women and what sounds like primitive beasts growling is unsettling. The high pitch of the atmosphere – especially in the Cabinet of Curiosities segment of the show, where a column blocks the view to an exit – makes the heart race, increases the sense of drama and seems to spirit one back in time to either a luxuriously appointed medieval dungeon or a stone-age cave.

During his 19-year career, McQueen built a rambling edifice upon a strong root: a Byronesque vision of romance as dark, brooding, dangerous and addictive. His designs evolved outward but also circled back to the exaggerated silhouettes and decorative embellishments worn by men and women in the 1860s, 1880s and 1890s. Similarly, Bolton anchored Savage Beauty with sections examining Romanticism and various aspects of it that emerged in McQueen’s collections.

In the first section, The Romantic Mind, visitors will see signature McQueen: expert tailoring, gender bending and merging, engineered prints and the “bumster.”

The next section, Romantic Gothic, ups the ante with jewels, feathers, capes and resin vulture skulls positioned at the shoulders of one ensemble.

In Romantic Nationalism, visitors will see McQueen’s riff on his Scottish lineage – and disgust with an idealised view of the highlands – in such collections as his career-making Highland Rape (autumn/winter 1995–1996) and Widows of Culloden (autumn/winter, 2006–2007).

In Romantic Exoticism, there are Asian-style flourishes, borrowings and transformations, as well as a dress made of razor-clam shells and a silk coat woven with a thermal image of McQueen’s face.

In Romantic Primitivism, Bolton included ensembles from McQueen’s It’s a Jungle Out There (autumn/winter, 1997–1998), Eshu (autumn/winter 2000–2001) and Irere (spring/summer 2003). All of a sudden, the location seems to shift to a natural history museum, where the specimens (taxidermy crocodile heads, antelope horns, duck feathers, a harness made of black python) are displayed on clothing.

In Romantic Naturalism, the body becomes more important than the “costume”. For a dress from the Sarabande collection (spring/summer 2007), McQueen had nude silk embroidered with silk and fresh flowers, making the body itself a garden. In another dress from the same collection, cream-coloured, hand-painted leather moulds to the body as a second, nearly transparent skin.

The final section of Savage Beauty, the “Cabinet of Curiosities”, contains headdresses, neckpieces, masks, bags, jewellery, shoes and an assortment of items that might have come from the twisted minds behind the Inquisition: a “jaw bone” mouthpiece, a “spine” corset, a silver “nose bar” and the carved elm wood prosthetic leg with integrated boot (resembling beautiful, fossilised remains) that McQueen made for para-Olympian record-holder Aimee Mullins.

The 240-page catalogue produced by the Costume Institute in association with Yale University Press (US$45/UK £30) mirrors the exhibition sections, illustrated with photographs taken by Norwegian fashion photographer Sølve Sundsbø. Every aspect of the catalogue pays homage to McQueen’s idiosyncratic world and would, no doubt, receive his approval. Might he have laughed at the suggestion of using real models covered with white makeup, joints articulated with black strings, to appear like marionettes? Perhaps, but he might also urge the curatorial team to push the envelope. And so they did: wiping away patches of the white makeup so that rosy skin peeks through as bruises and blood, and manipulating the photos so that the bodies appear to have been decapitated. The most notable features of the outstanding volume are its holographic cover, which overlaps a photo of McQueen’s face with a skull, and the predominance of McQueen quotes used as a counterpoint to fashion photography. Many of his outspoken statements were reactions to shallow understanding and misapprehensions of his subtexts. As such, the quotations provide great insight into his strengths and vulnerabilities.

When fortune shined on a working-class, gay high-school dropout from London’s East End, it must have seemed to McQueen to be inevitable. An inarticulate dream of working in the fashion industry led him to be an apprentice, aged 16, with Savile Row tailors; find positions with Koji Tatsuno in London and Romeo Gigli in Milan; earn a graduate degree from the most prestigious design college in England; form his own company; attract attention and notoriety from the international fashion press; entertain offers from huge multinational fashion corporations (first Givenchy, where he served as chief designer from 1996 to 2001, and then Gucci); launch a men’s wear line and boutiques in England, Japan and America; and make licensed deals with Puma and Target.

It is tempting to try to delve into his dark mindset and history of his drug use, broken relationships and depression to explain why McQueen’s successes failed him. McQueen had a restless imagination and needed to keep his audiences and, maybe, himself guessing at the next leap, tangent or full-blown about-face he would make. If the dark side of love proved to be a tragedy in his personal life, it was a most creative stimulus for him professionally and for the UK’s flagging fashion industry. Savage Beauty leaves the inexplicable tragedy of loss unanswered. Instead, it honours the McQueen aesthetic and confirms his status among the most talented conceptual artists of his generation. 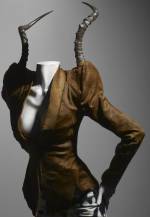 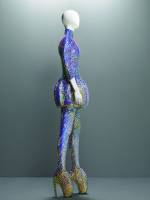 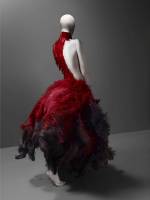 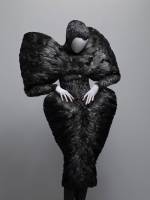 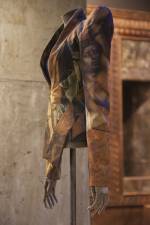