Fashion it may be, in that every item in this Alexander McQueen retrospective is for wearing, but art is its soul. This show, which charts the trajectory of the designer’s meteoric life is stunning, glorious and unmissable

You might think “Victoria and Albert Museum” paired with “blockbuster” an oxymoron, but weeks before the opening of this breakout show 71,000 tickets had been sold, and such was the media frenzy that even press hours were staggered. “And all this for the son of a cabdriver,” muttered someone behind me. Well, yes and no.

Lee Alexander McQueen (“Alexander” sounds more aristo, counselled fashion muse Isabella Blow) grew up in Stratford, east London: working-class, Cockney, gay and rebellious – but not lost. From the age of 16, he had apprenticed at two storied Savile Row tailoring firms and a purveyor of theatrical costumes. He then seamlessly segued to pattern cutter for Koji Tatsuno and Romeo Gigli; established his fashion bona fides with a master’s degree from Central Saint Martins; a short three years later presented his first collection, and three collections later shot to head designer of France’s august couture house Givenchy, while retaining the McQueen label to earn the British Designer of the Year award for his next four collections. The remaining trajectory of his meteoric life, fully celebrated here, is a history of fierce beauty.

Recreated essentially from the exhibition staged by the Metropolitan Museum of Art in 2011 – a date deemed distastefully close to the designer’s tragic suicide until the doors opened on a visual phenomenon that reverberates still – the present exhibition is larger, but without seeming so. Expanded by considerable square footage and 66 added items, it nevertheless feels more cramped. You might think that for clothes conceived as costume and realised as art, the curators would have made an exception and swept away the silver – even, for a season, the great Raphael cartoons – to give this exploding material the height and breadth it demands. Fashion by definition it may be, in that every item is for wearing, but art is its soul. These are not clothes for winter, autumn, spring or resort-wear, they are regalia for the combined season of life. That they overcome the tunnelled space the V&A seems to have definitively designated to fashion is a measure of McQueen’s indelibility.

Stunning, glorious and unmissable, the show is a knockout. Here, as in New York, it is predominantly grouped into McQueen’s preoccupations – subversive tailoring, goth, primitivism, nationalism, exoticism, naturalism – each of which had anchored consecutive catwalk shows labelled, like rare vintage wines autumn/winter 1993, spring/summer 1998 and so forth. Efforts to categorise by mood are less convincing, but nonetheless visual candy; garments given the innuendo of shamanism reign like royal portraits from grand gilded baroque frames; those referencing rape and ravishment wade through an ossuary.

If there is any wrong note it is in the emphasis on psychosis over design. Emotion is the wellspring of all art, and thereby open to analysis, but x-raying the subconscious is as futile as a dream-scan. Sadomasochistic, misogynist, fetishistic – all pertain, but do not enlighten, being terms that could apply to a number of statement makers – Vivienne Westwood, Rei Kawakubo and Jean Paul Gaultier among them. Nor is it helpful to reduce McQueen’s influence to cliches; “All about titillation,” was British Vogue editor Alexandra Shulman’s famous dismissal.

Look rather to proportion, design, texture, form and function, those classic vocabularies that were stretched to visual extremes by such visionaries as Goya (his beaks), Gaudi (those twisted turrets) Arcimboldo (the vegetable excrescences) and Dutch still-lives built around bloody game, rotting fish and vanitas skulls. Mash them up with the street slang of skinheads and hallucinogens and you have the McQueen vernacular, a visual signage filtered through both a tough adolescence and immersion in the tailored form, in history, and (completing the circle) in a cultural richness drawn since early childhood from visits to the V&A. Attempts to catalogue and contain McQueen’s rampant talent serve more to tame than explain it. Was he a formalist? Yes. A conceptualist? Indeed. And surrealism and exoticism formed his cultural DNA. But a Romantic? Less certain: McQueen didn’t flirt with ideas and materials – he wrestled them to the ground. His was a language of feathers – duck, gull, turkey, ostrich – engineered to empower female totems; of vulture skulls functioning as epaulettes, Perspex worked like leather, leather worked like metal, metal worked like bone; of worms inched into plastic, and horsehair woven into skin, and of multiples of anything – twigs, shells, shards, bones – layered, twisted and torn to create a new dialogue, new sensations, and a new definition of glamour that – irony of ironies, given that the exhibition is loudly partnered by Swarovski – relegates glitter to the realm of the ordinary.

From the early collections of avian fantasies and ripped tartan to the polished riffs on ethnic exoticism and skewed Darwinism, no room in the exhibition fails to excite and enthrall, but the gloriously stocked Cabinet of Curiosities, with its semi-wearable constructions, speaks to a vision that transcends shape and form to wander with Dante and Milton into spiralling narratives of heaven and hell. The cabinets are stacked too high for neck comfort, and the room’s title is a misnomer, in that the Wunderkammer was a single (usually titled) connoisseur’s collection of the rare and exotic, whereas here it is an assemblage of amazements culled by curatorial decision from the oeuvre of one man. The ensemble in its totality, therefore, comes off more as a curious-and-curiouser journey through the dark looking-glass of a certifiable genius. Tellingly, there are no standouts, because each garment, each accessory, presents a novel idea, a new manipulation of materials, a new take on a look that you’ve seen hundreds of times. Shoulders sprouting antelope horns; a cast-metal animal spine; lace cut and restitched to look violently torn; platform shoes twisted like diseased coral; pinched vests, louche corsets, slashed sashes, swathed antlers – savage signatures all – are redeemed by delicate florals, fragile filaments and fluffy organzas. There are wonders galore – a tiara of bird eggs, a glass cuirass, a hair shirt, a cantilevered headdress, and shredded silk sprouted like plumage from feathers shimmered like crustacea – all produced by the seeming alchemy of materials morphed into emotion. There are matchless marvels; a gown fashioned from paillettes of clamshells, and the model Shalom Harlow, slowly revolving as her dress is spray-painted by two robots. Notching up the impact, the echt accessories crafted with Philip Treacy, Shaun Leane and Sarah Harmarnee, as if by a Renaissance guild, reveal the potential of collaboration as driven by one mind. There is magic in the masked dummies (young McQueen liked to scare his mother by pulling a stocking over his head), and the videos of his famed runway shows, which slice between them like palette cleansers, are showstoppers once again.

The Cabinet in its entirety presents more as a vast “selfie”, with each model, each garment, constituting an avatar of McQueen. Overweening ambition, generally offputting, took both the designer and design to new highs. “I want to be the purveyor of a certain silhouette or a way of cutting, so that when I’m dead and gone, people will know that the 21st century was started by Alexander McQueen,” the designer famously stated, but his matchless talent delivered much more; design in the service of art, and art in the service of the human condition. Call it the transformative power of superhuman endeavour.

You will want to immerse yourself in the iridescence of Plato’s Atlantis, McQueen’s last collection, for its tour-de-force poignancy, but leave on the ethereal note of the hologram of Kate Moss, who blossoms, by the perverse magic of projectors and mirrors, from a mere speck to a fantasy of fully realised creativity that appears there, and then – like the designer himself – shockingly not there. The show as a whole reads like a finale – in both senses of the word – at once an emotional farewell to an irreplaceable artist and a display of spectacular fireworks that brings down the curtain on a triumphal performance. 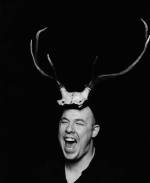 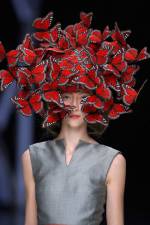 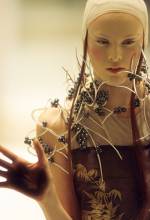 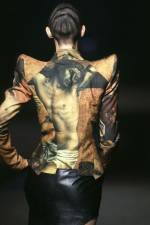