The Stylish Fruits of an Intriguing Challenge

The Stylish Fruits of an Intriguing Challenge

Where fashion designers create from intricately entwined aesthetic and commercial motivations with a watchful eye on the bottom line, emotional and spiritual needs drive folk and self-taught artists. These “outsiders” might sense an audience for their works – perhaps passersby in their neighbourhoods, a church community or the god they pray to – and even sell it quite successfully but, for the most part, they create on the sidelines, either unaware of, or unconcerned with, mainstream trends in the institutional art community, which has embraced fashion shows as a crowd-pleasing, lucrative commodity.

The American Folk Art Museum (AFAM) has just opened an exhibition linking art and fashion from a unique perspective that is characteristic of the unconventional yet critical role folk art plays in contemporary culture, American history and creative expression. The impetus for Folk Couture: Fashion and Folk Art is as intriguing as the display, involving a challenge from catalogue sponsor Frederic Sharf to co-sponsor Elizabeth Warren.1 Sharf encouraged Warren to attract crowds to AFAM by capitalising on the unprecedented appeal of the 2011 blockbuster Alexander McQueen: Savage Beauty at the Metropolitan Museum’s Costume Institute, and the allure of the Cooper-Hewitt National Design Museum’s 2011 Van Cleef & Arpels jewellery exhibition, Set in Style.

Sharf’s idea was not merely a matter of jumping on the bandwagon; rather, he and his wife, Jean, who gave their extensive folk-art collection to the Museum of Fine Arts, Boston, had shifted their focus to design including fashion and jewellery. Prompted by an intuitive grasp of the relevance of folk art to design practice, Sharf was, in hindsight, spot-on when he suggested that Warren act on his instinct.

The 13 designers invited to participate in Folk Couture by guest curator Alexis Carreño and AFAM chief curator and director of exhibitions Stacy C Hollander have achieved commercial success by keen observation of their discerning clientele’s tastes and responding with inventive, beautiful and wearable garments and accessories. In keeping with the spirit of folk art, for this show each designer seems to have dispensed for the moment with the fickle nature of the fashion world in favour of pure imagination.2

Their task: choose one or more works from AFAM’s paintings, sculpture, quilts, tin objects and works in other media as inspiration, and then create an ensemble reflecting the designer’s aesthetic and/or process. In effect, the challenge passed to participants, allowing them to draw their own connections.

To help visitors view the designers’ work in the context of folk art, Carreño identified four categories that describe a primary feature of certain designs: pattern, “disembodiment”, narrative and playfulness. For example, in the pattern section, visitors will find Gary Graham’s gorgeous wool coat and leggings displayed next to his selection, the Ann Carll Coverlet: Blazing Star and Snowballs, made in Long Island, New York, in 1810. A video captures the fabric being woven on a Jacquard loom at the Rhode Island School of Design in Providence. Aside from its irresistible charm, the coat conjures a visual trick in which stars and snowballs decrease in size as the eye moves from hemline to neckline. Graham says: “It really should look as if it’s rocketing up.”

Pattern is also paramount in threeASFOUR’s patent leather dress, attire perfectly suited to a fashion-conscious angel. The origins of threeASFOUR’s designers – Gabi Asfour from Beirut, Angela Donhauser from Tajikistan and Adi Gil from Tel Aviv – hint at their intentions when they chose the Friendship Star Quilt made by Elizabeth Hooton (Cresson) Savery and others, dated 1844. Referring to the quilt’s six-pointed star motif and its potential for Jewish, Islamic and Christian symbolism, threeASFOUR state: “We liked the quilt because it has the Star of David, but it was not made by Jewish people; it was done by Quaker women as a sign of friendship in Pennsylvania in the 1800s.”

For his contribution to “disembodiment,” menswear designer John Bartlett gravitated towards a late-19th/early-20th-century wood sculpture, Man with Green and White Suspenders, artist unknown. Bartlett translated the shiny metal buttons on the shirt of the elongated figure into green polkadots that decorate his quilted pantsuit cut for a man of similarly distorted proportions.

In the narrative group, Bibhu Mohapatra’s effort is a fine example of the interplay between history and design. His silk chiffon sari-like dress with bodysuit derives from a nautical-themed tattoo pattern book made in New York City more than a century ago. The bodysuit’s wave-like pattern resembles mehndi tattoos. In the catalogue, Mohapatra says: “What really inspired me was that every page you flip becomes sort of a new history that is based on the drawings.”

Admirers of Malaysian designer Yeohlee Teng’s architecturally constructed, ethereal collections will not be surprised to see her entry in the playfulness category. A longtime resident of New York City and advocate of the city’s fashion industry, Teng took photographs of four 20th-century wooden animal figures – a coyote, a ram and the mythical jackalope, all made in New Mexico, and a dog made in St Helena Island in South Carolina – for her Shamanistic Printed Prayer Flag Dress of Brown Kraft Paper.

To accomplish the outward simplicity of her internally sophisticated designs, Teng uses a mathematical equation and precise attention to geometric scale, a procedure evident here in her layered, A-line, gravity-defying dress. In his essay, Carreño spotlights Teng’s ingenuity in capturing 3D sculpture in a 2D medium (photograph), printing the photographs on paper and completing the circle by using the paper as a fabric that would drape a 3D body.

AFAM has carried through its daring approach to museum fashion exhibitions with a series of programmes challenging the public to become involved in this unusual convergence of artforms: for instance, a sketch contest to be judged by Carreño with first- and second-prize awards and a paper-doll event, in which visitors can dress a small, playtime model in their own fashion creations. Some of the designers are giving presentations. All events are free.3

Through the centuries, couturiers and dressmakers have embraced influences from around the globe and from every era. Folk Couture extends this natural tendency by recognising the vibrant, resourceful artistry of folk and self-taught artists and their potential impact on fashion design. 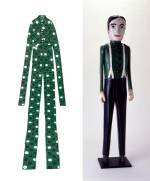 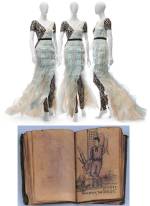 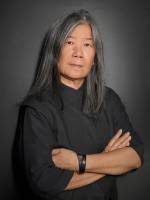 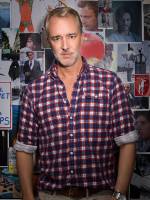 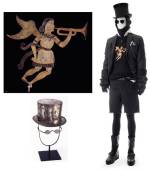