The spectacle that is the Royal Academy Summer Exhibition and the stylishness of its visitors has, it seems, never waned and, from the outset, the press has contributed to its reputation. Its visitors are just as important as the artworks they come to see 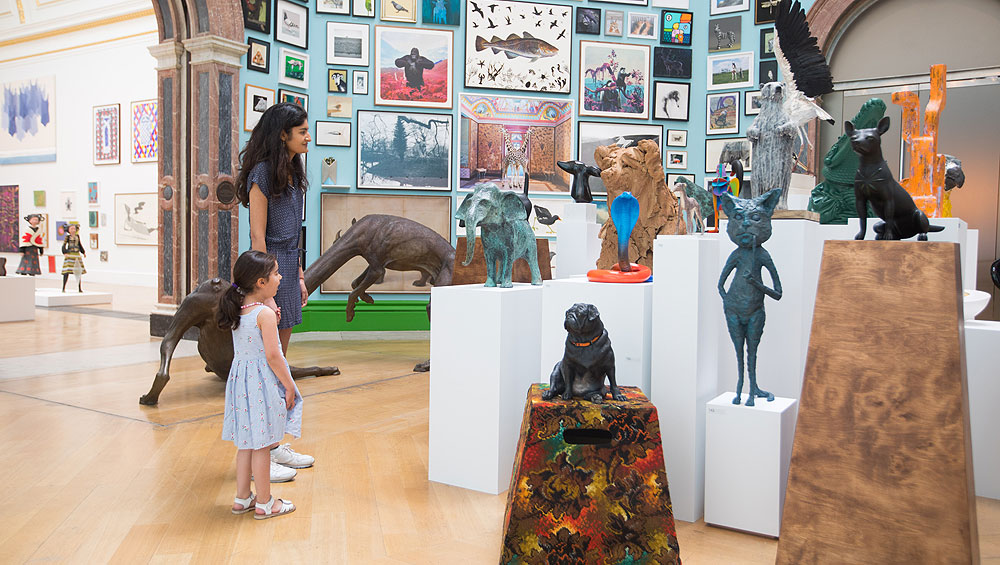 On the occasion of the opening of the Royal Academy’s first Summer Exhibition in 1769, the London Chronicle described its visitors as “a very crowded and brilliant route of persons of the first fashion”.1 In 1871, with the development of periodical and newspaper publishing in Britain, the Academy introduced its first formal press view, a day carved out for members of the press “for their special benefit that they might have every facility in their careful examination of the works”.2 Yet if the exhibition’s reputation for spectacle is built as much on its visitors as on the artworks displayed, then to attend only the press view is to miss half the point. To visit the exhibition on any other day, surrounded by the selected artworks and amid the streaming crowds of visitors is to engage with the spectacle first hand. The plethora of red sale dots, first introduced in 1865, is a reminder, if it were needed, that this is a commercial enterprise as much as anything else. With just over 1,500 works selected from 16,000 submissions this year, it is as popular with artists as it is with patrons, visitors and buyers. 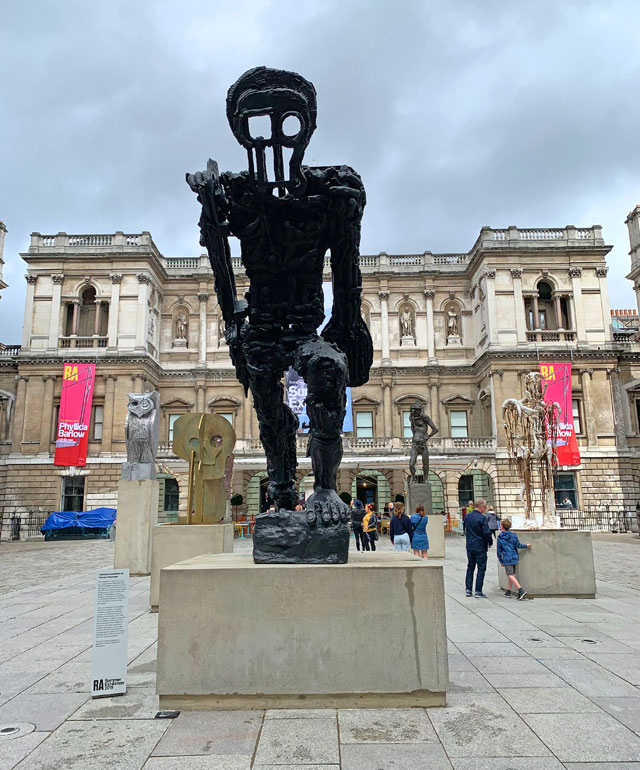 This year’s exhibition begins in the Annenberg Courtyard, where six enormous figures by Thomas Houseago respond to the statue of Joshua Reynolds, which has stood there since 1931. The vigour and determination that these figures collectively embody propels visitors into the exhibition with a sense of curiosity and urgency. 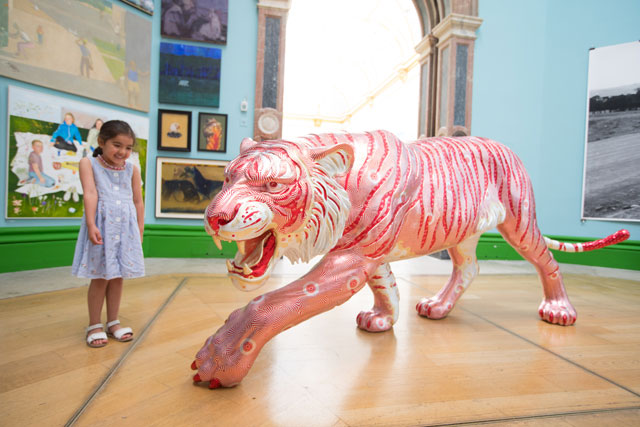 As you move inside to the main exhibition spaces through the Wohl Central Hall, the zoological theme is overwhelming. Paintings, prints and sculptures of birds and animals, including David Mach’s much-talked about work Easy Tiger – Mach Brothers, fill the space. There is an elephant, an arctic tern, a whippet, a cat, a pig and much more. The mix of domestic, farmyard, wild and even mythological animals is a perplexing one that creates a frenetic feel to the space, as visitors circle around the central group of large animal sculptures. 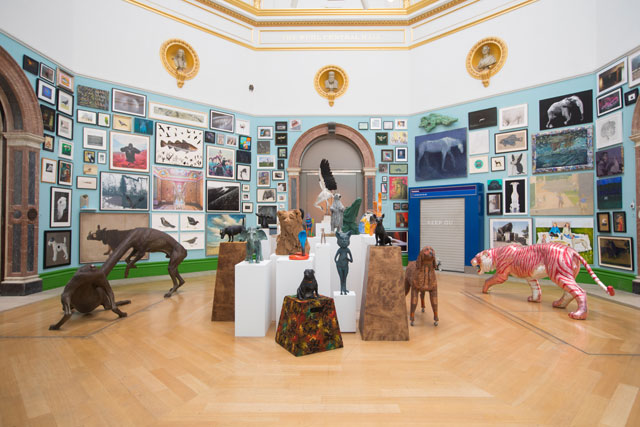 Gallery III is the largest and most imposing space and, as is traditional, is hung by the Summer Exhibition coordinator, who this year is the painter Jock McFadyen RA. McFadyen wanted to mix photography and paintings, as well as creating what he calls “a retinal hang”, that is, something that visually pleases. 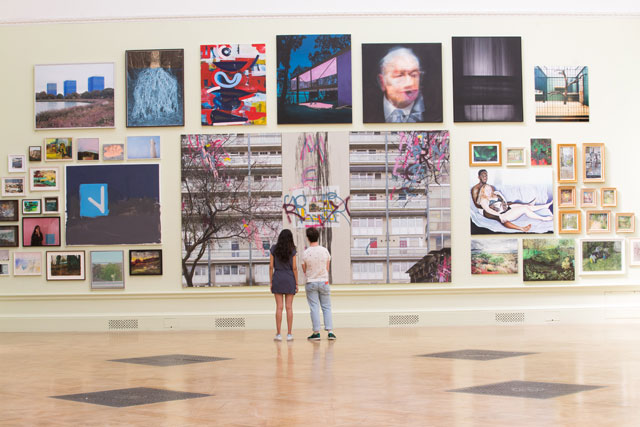 Each wall is grounded in a key large-scale work that engages with the world in a particular fashion. These are striking not only because of their scale, but also because of the questions they raise about the world in which we live. For instance, the desolate wasteland depicted by Anselm Kiefer is post-apocalyptic while David Hepher’s housing estate is dystopian, at best. These kinds of themes ripple through the other works in the hang and it is good to see the densely hung walls of the Royal Academy dealing with difficult issues. 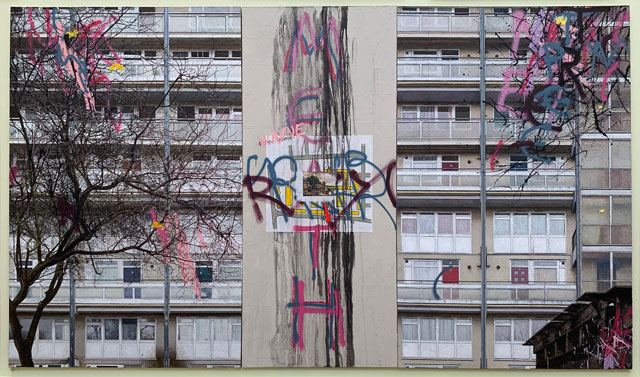 It is almost a relief to walk into the next gallery and a group of largely abstract works selected by Richard Wilson. This much smaller space allows for moments of reflection on sculptural and two-dimensional works made by sculptors, including Richard Long’s diptych painted with mud from the River Avon. It is a helpful interlude for the visitor, particularly because works in the adjoining galleries have a great deal to say. 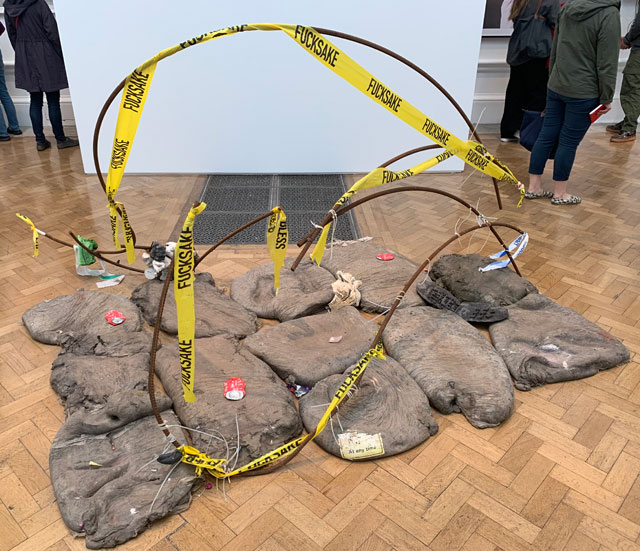 In Gallery I, Jane and Louise Wilson have assembled some of the most overtly political work of the exhibition. It is not easy viewing, nor should it be, with themes such as identity, migration, protest and ecological threat dealt with directly and unapologetically. Michael Dean’s floor sculpture does not pull any punches and the Wilsons suggest it sums up the feelings of a generation.

Spencer de Grey’s hang in the Large Weston Room is one of the most heartening and innovative displays of architectural drawings and models at the Summer Exhibition for some years. It has been a perpetual problem for the architectural hang that technical displays are often perceived as uninteresting for the public and only three years ago they were criticised as technically adept but deeply dull.3 This does not seem to be an issue this year. Built around a central grove of trees, the exhibits all focus on sustainability, highly pertinent given current environmental concerns, which perhaps helps to explain why it is so engaging. 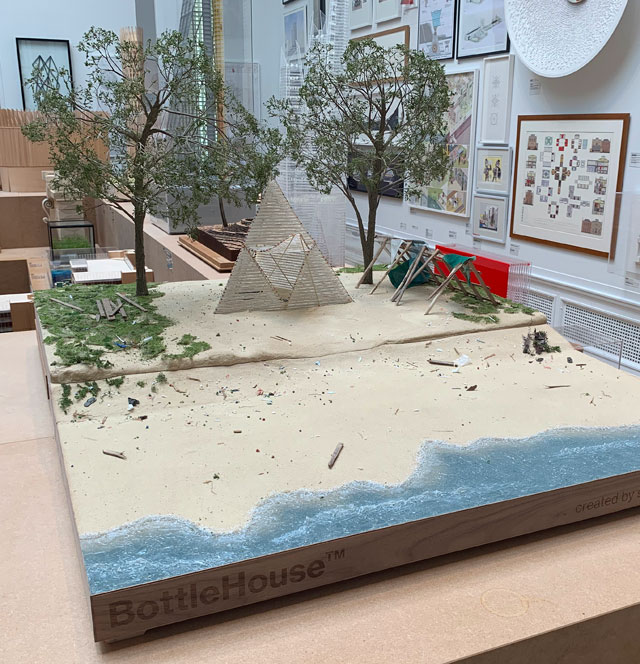 In BottleHouse, the architectural and design consultancy small. creates an entirely recycled structure by building temporary shelters from empty plastic bottles. The project also provides jobs, income and security and education for local communities in building shelters from plastic waste. It is impressive and exciting and indicative of many of the other projects selected. The adjoining Small Weston Room is sparsely hung, with just six works that together offer the viewer some space for reflection after the thrills of de Grey’s architectural hang. 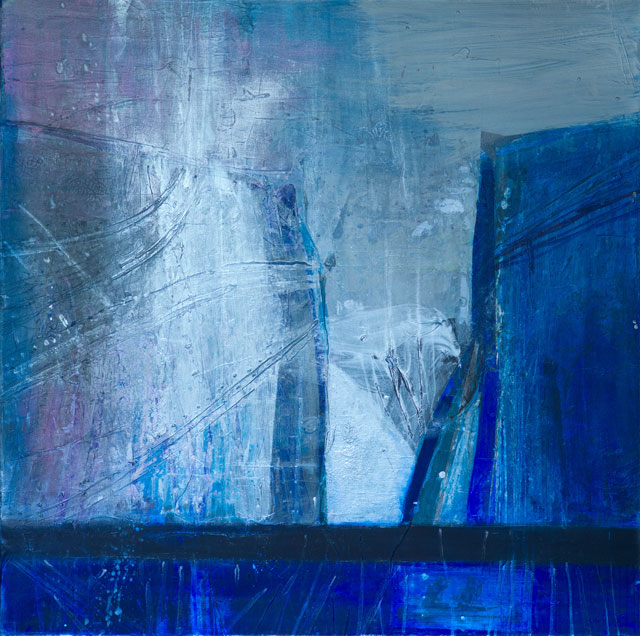 Across in Gallery IV, Barbara Rae’s hang presents works that engage with science and nature and, once again, concern for the environment is brought to the fore. This stems from Rae’s four trips to the Arctic when she became acutely aware of humankind’s erosion and damage of the natural environment. In one sense, this is nothing we do not already know, but with the currency of environmental activism it is good to see these concerns fully reflected in the exhibition. The next few galleries seemed less ambitious in their aims and less impactful in their effect. 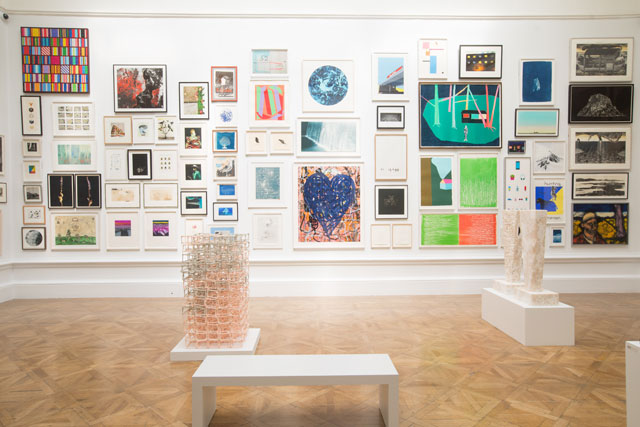 In Gallery V, Rae and Hughie O’Donoghue’s hang focuses on nature and our enjoyment of it. Timothy Hyman’s hang in Gallery VI is concerned with the figure while Gallery VII, hung by Anne Desmet and Rae, has an urban focus. 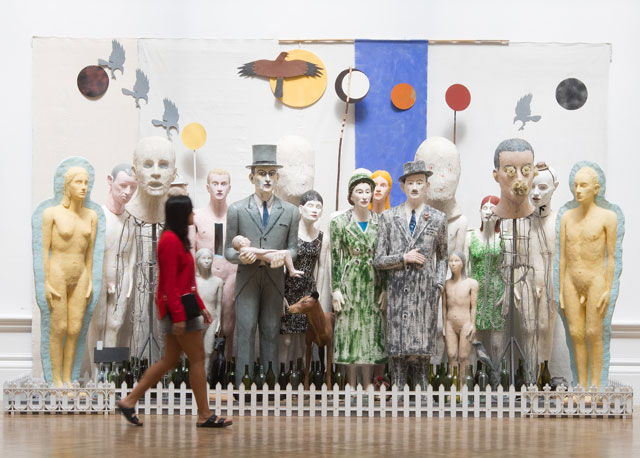 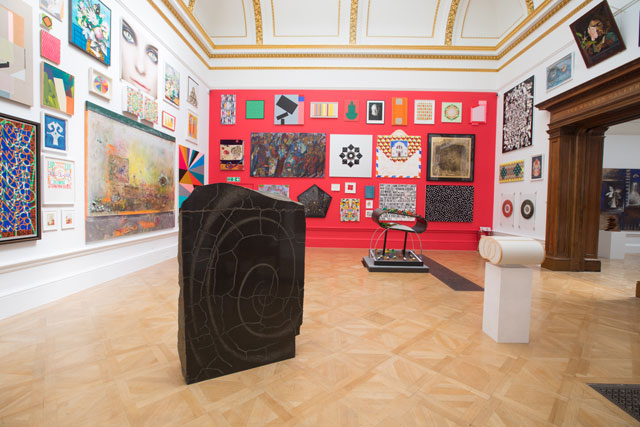 Gallery VIII, hung by Bob and Roberta Smith, is a riot of colour and joyful because of that. It may not feel particularly substantive, but perhaps joy is enough sometimes.

Gallery IX, hung by O’Donoghue, deals largely with human passions and is dominated by the artist’s own The Full Heat of the Sun and Benedict Byrne’s huge limestone sculpture The Scarred One. 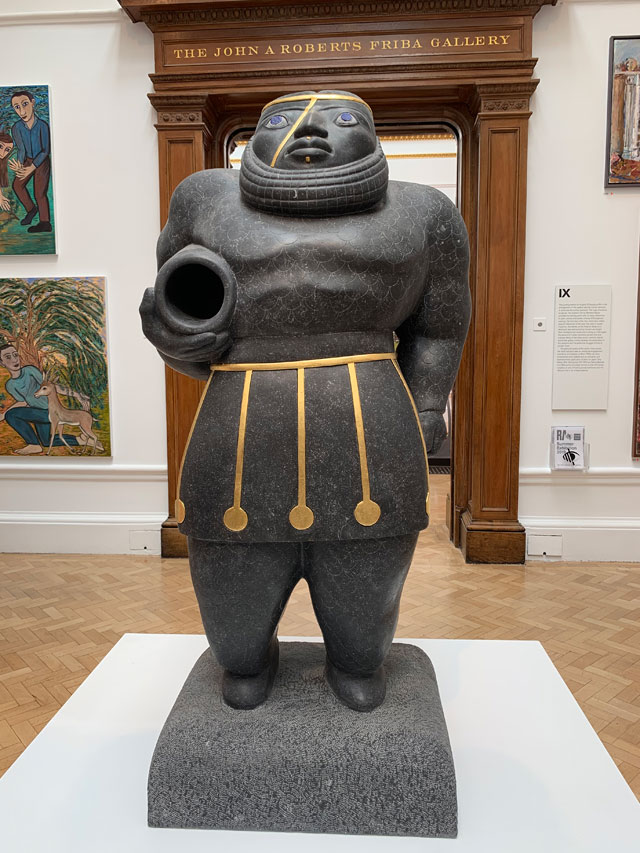 Next door, in the Lecture Room, Stephen Chambers hangs established artists alongside those showing work for the first time. Twenty years ago Michael Kenny was just one of those to discuss the egalitarian nature of the exhibition: “It’s the only exhibition in this country, and perhaps the world, where you will have an artist of the calibre of, say, Jasper Johns showing in the same room as an amateur Sunday painter or printmaker.”4 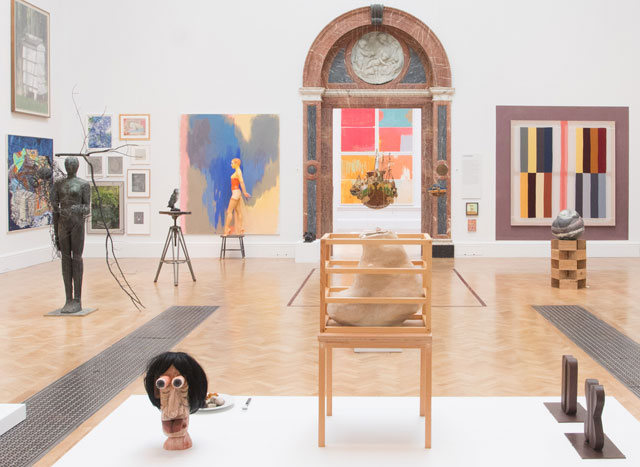 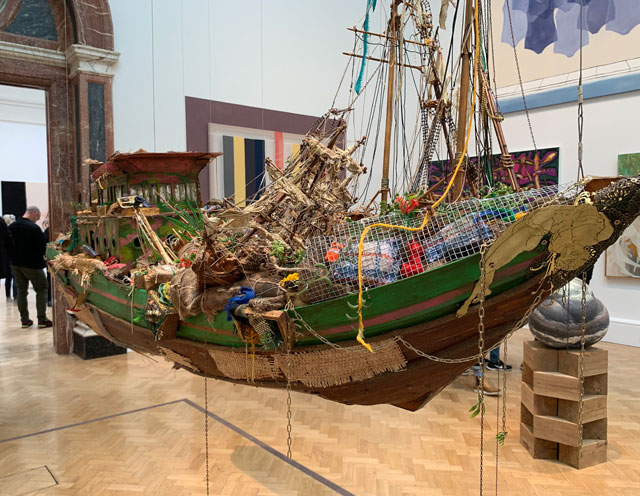 While this sort of strategy is an established practice at the Summer Exhibition, Chambers’ selection cleverly sets the works in dialogue. Hew Locke’s Gravesend sculpture stands out here – it is unavoidable, as the boats seem to float across the middle of the gallery and demand our attention. 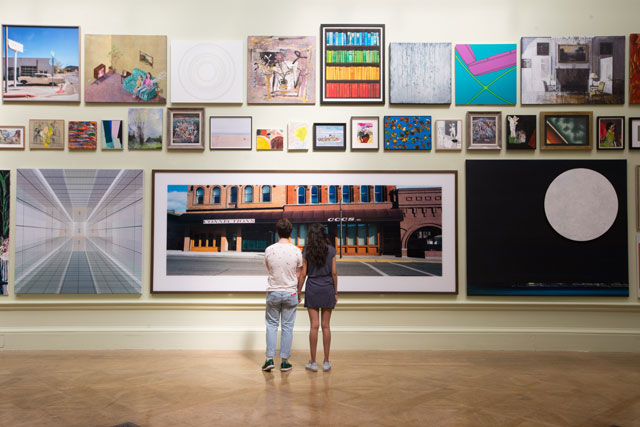 Over in the McAulay Gallery, Wim Wenders’ large-scale photographs are cinematic, perhaps unsurprising for someone best known for his film-making. We are told that Wenders’ claim is that, in front of these photographs, the viewer becomes the object. This quiet gallery away from the main throng of the exhibition is certainly a place in which to consider the viewer as an object within the spectacle of the cultural phenomenon that is the Summer Exhibition. It is an exhibition that has had many remarkable years in its long history, good and bad. The 251st Summer Exhibition is notable for its environmental focus, in the architecture hang, in Gallery IV, and as a unifying and commendable thread that runs through the exhibition as a whole. It leaves you wondering what you can do to make a difference. 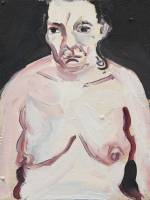 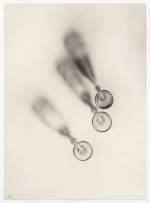 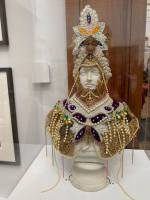