The Life of the Mind: Love, Sorrow and Obsession

The Life of the Mind: Love, Sorrow and Obsession

Curated by Bob and Roberta Smith

As the culmination of a 16 month residency at the New Art Gallery, Walsall, Bob and Roberta Smith, the artistic personae of Goldsmiths-trained Patrick Brill, have stepped into the role of curator to put together an impressive show, bringing together the work of artists they admire, both historic and contemporary, and inspired by one of the gallery archive’s key sculptures, the “Mona Lisa of Walsall”, Jacob Epstein’s First Portrait of Esther (with long hair), (1944).

Epstein is famously credited with having great insight into the minds of his female subjects, but here, his 15-year-old daughter stares piercingly ahead, resisting analysis. She might as well be crying the exhibition’s title, taken from John Goodman’s arsonist character in the Coen Brother’s 1991 film Barton Fink, “Look upon me. I’ll show you the life of the mind…”. With this sentiment in mind, the Smiths set out to reveal to the public what it means to be an artist, and the effect that being an artist has on those around him, especially his family.

Twenty-eight artists are represented, including a number of powerful women – among them Louise Bourgeois, Tracey Emin, and Sarah Lucas – who together echo the Smiths’ call, in their placard painting Esther’s Law, for there to be the same proportion of gender diversity and disability reflected in parliament as there is in society.

The exhibition is vast, filling the third floor galleries, and containing numerous video works, which, if watched in full, could alone fill over an hour. Throughout, one is surrounded by a cacophony of competing sounds from these different soundtracks – cheering, clapping, shouting, and Anne Bean’s harrowingly repetitive screams, in Shadow Deeds (2009–10), of “mortality!” The key themes are love, sorrow, and obsession and, as the curators suggest, are wholly intertwined and interdependent. Their sculptural installations, The Bonfire (2009) on the fourth floor, Eppy Daddy Battle Bot (2010) in the foyer, which celebrates Epstein being the inventor of the idea of the robot with his sculpture Rock Drill (1913–15), Sean Burn’s questioning of the “languages of lunacy” as part of his current residency, and, of course, the permanent Garman Ryan Collection (an extensive archive of letters, photos, and artworks of and by Sir Jacob Epstein), all complement the show, and further the Smiths’ belief in the power of art to act as a social and political force.

So is it all just “crap in a corner”, the conclusion drawn by the characters in Janette Parris’ short cartoon Fred’s Café (2001), a meditation about the difficulties of getting people to understand what being an artist is all about? Well, that’s for each visitor to decide for him- or herself – I certainly do not want to risk making assumptions about another’s mental space! Nevertheless, I would hazard a guess that this would not be a wasted trip. 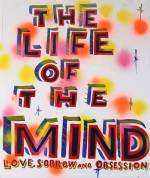 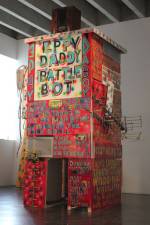 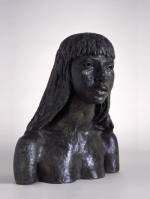