Jock McFadyen – interview: ‘The Royal Academy Summer Exhibition doesn’t get a fair crack of the whip from critics’

Jock McFadyen – interview: ‘The Royal Academy Summer Exhibition doesn’t get a fair crack of the whip from critics’

McFadyen, known for his urban landscapes and putting the marginal centre stage in his paintings, is the co-ordinator of this year’s Royal Academy Summer Exhibition. It’s been challenging and exciting, he says, but he’s finding the baggage of its reputation more than a little trying 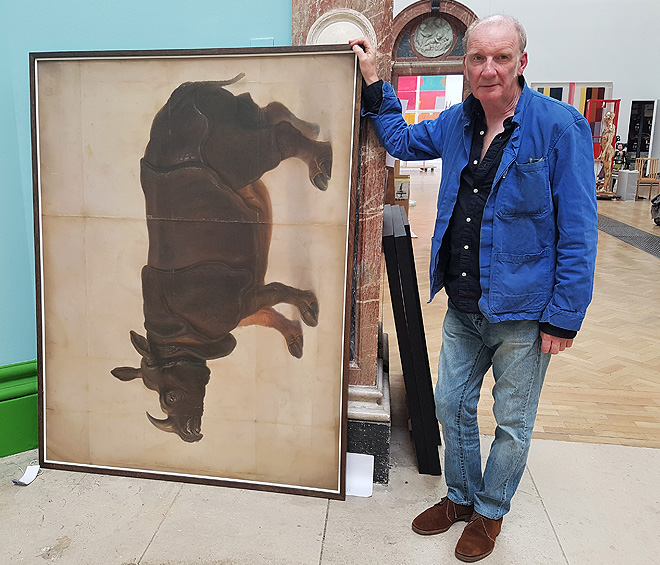 Jock McFadyen with one of 'the menagerie', RA Summer Exhibition 2019. Photo: Juliet Rix.

Jock McFadyen was born in 1950, in Scotland, and raised in Glasgow before his family moved south when he was 15. After training at the Chelsea School of Art, he settled in London’s East End, where he has lived and worked for four decades. His painting focuses on closely observed urban landscapes – more often the industrial and run-down than the conventionally attractive. He was commissioned by the Imperial War Museum to record events surrounding the dismantling of the Berlin Wall, and he created the sets for Kenneth MacMillan’s The Judas Tree at the Royal Opera House. His work has been the subject of more than 40 solo exhibitions and is in 30 public collections. McFadyen was elected a Royal Academician in 2012, and curated a room in the Summer Exhibition in 2015 and 2016. This year, he is in charge. I meet him at the RA as the selection process enters its final phase and the hang gets underway.

Juliet Rix: How is it going?

Jock McFadyen: It’s hell because I’m waking up at 4.30 every morning with all the images in my head. We’ve had more than 16,200 submissions and we have to get that down to 1,200. Plus we have the works of the 80 Royal Academicians – all of whom have a right to be in the show – and the honorary RAs, and the invited artists – and I’ve invited a lot of artists. After digital pre-selection, we get about 3,000 works in, then have just two weeks to decide how it all fits together and what finally gets hung. It’s the curatorial equivalent of action painting. 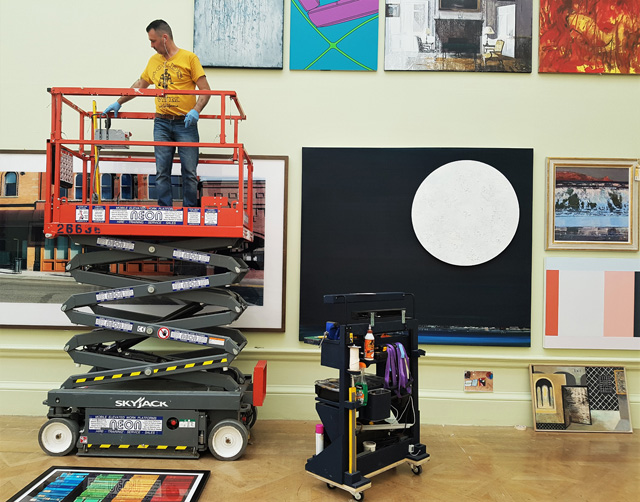 JR: Did you have any hesitation about taking on the role?

JM: No, I was thrilled to be asked. Before I became a Royal Academician in 2012, I never came to the Summer Exhibition. It wasn’t on my radar. I’d been invited once or twice and came along and saw my picture and left. People’s perception of the show is that it’s middle of the road, full of amateurs and pictures of cats and dogs by hairdressers from Wiltshire. I suppose I shared that misapprehension. When I got here, I realised how important the show is.

I am actually slightly pissed off by the baggage of history the RA exhibition carries. The show doesn’t get a fair crack of the whip from critics. It is the only large survey show curated by artists, and that should surely have some intellectual traction. Most contemporary shows are either commercial and curated by art dealers – effectively shopkeepers – who show only artists they represent, or, at somewhere like the Tate, they’re curated by academics, curators employed by Tate, most of whom are about 12 years old.

The RA membership now reflects the contemporary art world; everything is represented. We’ve got Grayson Perry, Tracey Emin, Wolfgang Tillmans, David Hockney, Gilbert & George and Isaac Julien, as well as starchitects such as Richard Rogers and Norman Foster; we’ve got David Adjaye – what’s uncool about him?  Our honoraries include Jeff Koons, Anselm Kiefer, Ed Ruscha … the whole gang of the contemporary art world.

People who are snooty about the Summer Exhibition are labouring under a misconception. It makes me quite angry, actually. We have a growing number of very serious artists, non-RAs (some selling for hundreds of thousands of pounds) sending their work in. The time has come for the show to shed its image. Critics should be eager to know what our top contemporary artists think is worth seeing.

JR:  What about the amateur element?

JM: In Turner’s day, the RA exhibition was Academicians and non-Academicians, but they were all professionals. I don’t dislike amateur art – Alfred Wallis is a great artist, from amateurism can come great professional artists – but I think the position of the professional artist is very different. I mean, you don’t get me painting pictures from Monday to Friday, then doing a bit of dentistry on Sunday, do you? And we don’t expect our starchitects to exhibit/build alongside amateurs (in fact, it’s illegal – the house might fall down). The amateur artist – like Churchill – is painting for pleasure. Some amateur artists are better than professional artists, but they’re not doing the same thing.

If you’re a professional artist, at the back of your mind is whether you are adding to the unfolding story of art. You don’t set out to enjoy yourself. You spend so much time by yourself watching paint dry. It’s hard. A poor old art student graduates and has to find somewhere to live in one of the world’s most expensive cities – and then they’ve got to find somewhere to work. Lots of them end up with a timeshare in a studio and drive an Uber or work for Deliveroo to pay for it. That’s not amateurism, that’s serious professional intent.

Among the submissions, we had 30-plus terrible pictures of David Bowie, a smaller number of Bob Marley, some which referred to Grenfell Tower and loads that referred to the refugee crisis and Brexit (none were pro-Brexit; I think people interested in the arts are bound to be remainers). We haven’t accepted any of them. Journalism is the best place for that. And you can’t have people doing a crap painting of David Bowie and expecting it to be hung alongside a painting by Kiefer.

JR: You are the co-ordinator, but there is a sizeable committee involved in selecting the works. Have you found that there is some intrinsic artistic quality that allows you to predominantly agree, or is artistic merit largely in the eye of the beholder?

JM: There are about 10 of us making the decisions and it is difficult because we don’t all agree, so we all have to accept things that others like and we may hate. We might even make work that the others hate – but we’re friendly about it.

JR: Have you given the show a theme this year?

JM: Yes – art that describes the world. That’s not necessarily figurative. It can be completely abstract or conceptual, as long as you can palpably see it’s a response to the world. And for architecture, which is being curated by Spencer de Grey, the theme is sustainability.

I am also having a menagerie in the central hall where every single work will be an animal. It’s a homage to the first art known – cave painting. And it’s to face down the idea that the Summer show is an exhibition of cats and dogs. There will be snakes, bears, reindeer, tigers … I’m going to fill the whole bloody thing with animals. And that also connects to sustainability.

The first art was cave paintings of animals – often beautifully drafted. Paintings are extremely conventional and usually oblong, so is architecture, even film, whereas everything about us is shapeless. We don’t have a straight line in our bodies. Caves are shapeless, too. The only contemporary artists who also ignore all those straight lines are graffiti artists. They go across vehicles, doorways, windows; they have no respect for edges. That’s something I find very exciting.

JR: Is there any graffiti in the show?

JM: We have a Banksy. In the menagerie. It’s a roller shutter – a real blind from a customs building – with a stencilled rat, catching the end of “Keep Out” and a tiny ring of gold stars and the word “Exit”. It’s a great, subtle, comment on Brexit.

JR: Who else have you invited?

JM: Wim Wenders, the film director and honorary academician. He makes stunning huge photographic work. He has his own room in the McAulay Gallery.

JR: These photographs have something in common with your paintings.

I’ve also invited British photographer Hannah Collins. And Tom Hunter. I’m mixing a lot of photography in with the paintings.

Also, Hew Locke (who has a successful show at the Ikon, Birmingham, at the moment) and Marcus Harvey, who did that painting of Myra Hindley that got pelted with eggs and ink in the Saatchi show in 1997 in these very rooms. I’ve invited him back and he’ll be hanging in the main hall. Many of the YBAs who were in that Saatchi exhibition are now Royal Academicians.

JR: Have there been any wow moments as you have gone through the submissions?

JM: Yes, loads. From the established artists, of course, but also from the open submissions. It’s so exciting when you see work you think is great from someone you’ve never heard of (and you’ve never heard of most of them) and then it comes in and it’s even better than you thought – it’s so thrilling. Like buying something from eBay and finding it’s 20 times better than you expected – a real bargain, a gift!

JR: Is the show almost ready?

JM: Errr … We’ve had a few hiccups. The lift broke down – the huge lift that carries up the sculptures that weigh tons. And the handlers mistakenly took all the accepted works down to the rejected room and we couldn’t find any of the paintings. So it’s been a bit of a nightmare. But we’ll be ready.

JR: What will you do with yourself when all this is over?

JM: I have a new monograph, by Rowan Moore, out in June, and a retrospective at the Lowry in Salford, followed by a show at the City Art Centre, Edinburgh. And in 2021, I have a show back here at the RA. 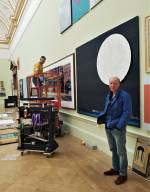