Three recent series of works from the New York artist, using her trademark method of tessellating two pictures together, draw the viewer into a carefully choreographed network of associations

“The world is wasted on the young. Youth is my oyster.” The walls of Hauser & Wirth London’s north galleries are currently plastered with such statements: inverted idioms, pickled proverbs, experimental poetry of a surreal nature. Roni Horn (b1955) uses words as her motifs, moving them about to suit her canvas, engendering new forms of expression, sometimes speaking with a greater clarity than the original material.

Her exhibition, which spans both north and south galleries, is made up of three recent series: the just described Hack Wit (2013-14), Or (2014) and Remembered Words (2013). Each is made using her surgical method of cutting up two original drawings and splicing them together, carefully tessellating the pieces. The results are at first seemingly random, creating nonsensical jigsaws but, on closer inspection, there are threads and links running through the works. Nothing is arbitrary.

The Or works, from a distance, look like brains, or cells, or maybe clouds broken through by rays of inspiration. The spirals and nerves are decorated with words, and those near to each other rhyme: plop, crop; cut, rut; true, blue, stew. One theoretical model of the brain’s lexicon looks just like this: a jumble of neural networks, tangled and overlapping, with individual words linked according to related sound or meaning or context or word form. As in a game of word association, it is all about activating pathways.

Or 6 suggests a conversation between two brains, with their overlapping neurons, and Or 7 is littered with names: female jazz and blues singers Alberta Hunter, Billie Holiday, Shirley Horn and Ella; the writer Lydia Davis; and then Charlie Hebdo. The latter is in a network with associated words, such as Paris, France, trouble, thwart and wit. The balls of yarn are reels of language and, as they unravel, they tell tales, intertwining with one another, conversing, learning and absorbing new input from each other.

There are not just links within a work, but also from one work to the next. So as you read the aphorisms in Hack Wit, again, there is an unfolding and developing of thought. Elements of one crop up, freshly jumbled, in the next. It is as if Horn is seeking the deeper meaning beneath. Reading the works in turn is like eavesdropping on a particularly distorted game of Chinese whispers: always something added, always something lost. This idea of loss also resonates throughout, with the works looking like shattered mirrors, broken into shards and pieced back together; broken and interrupted thoughts, linguistic confusion – symptoms of ageing, of dementia, of Alzheimer’s disease. Sometimes, however, a surge of colour (for example, Hack Wit – home moon) flashes like a brainwave: recollection, inspiration, creativity.

The Remembered Words works resemble colour charts for paint samples, but here they are word samples, a snapshot of the mind’s vocabulary. Again, the words are seemingly unrelated but, study more closely and connections can be found. Remembered Words – (Withnail), for example, contains such terms as: Myra Hendley (sic), maim, decapitate, Fred and moor. Some are neat charts, with each circle of colour labelled tidily; others are a mess, with circles overlapping and only the odd label floating past; some are a combination of the two. In Remembered Words – (Milk), a flurry of white circles obfuscates the coloured circles and words beneath, like a virus multiplying and taking control of the body. Once more, the cross-piece connections, gems to seek out, make it worthwhile taking your time to read and process as you look around. A blue circle in Remembered Words – (Sourpuss) labelled “cadmium red” speaks across the room to a red circle in Remembered Words – (Blue Devils) labelled “ultramarine”. This is a playful, humorous, dark, perceptive and thought-provoking exhibition to be enjoyed at leisure. 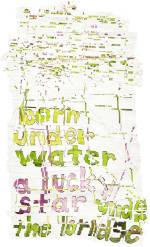 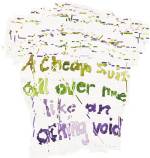 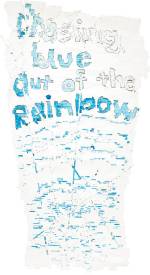 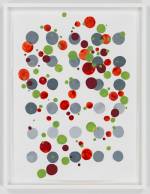 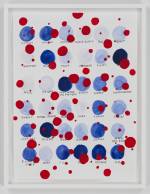 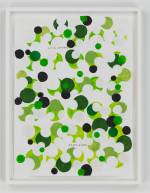 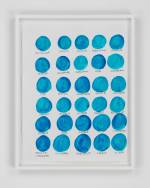 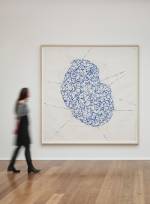