This is the first posthumous exhibition of Richard Smith, who died last year, and whose work straddled pop and abstract art 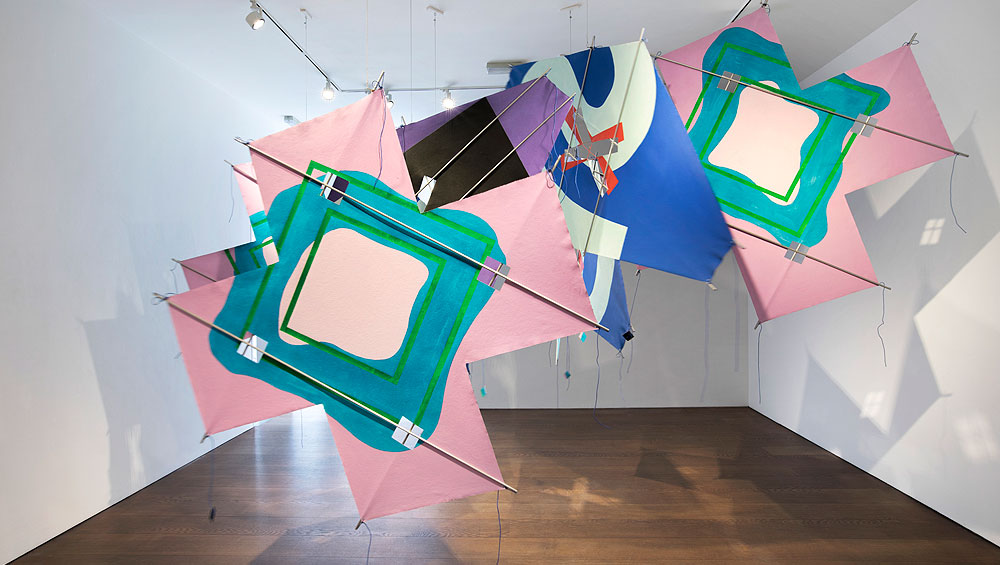 Richard Smith died last year at the age of 84, during the run of an exhibition of his prints in his home town of Letchworth Garden City. Work of Five Decades at Flowers Gallery in Cork Street is the first posthumous London showing of the artist, who had been permanently resident in the United States since 1978. Early in his career, Smith appeared in the group exhibitions Place, 1959, and Situation, 1960, now considered important moments in the story of abstract art in Britain. His 1975 Tate retrospective reunited all the works included in five of his previous exhibitions, starting with his first solo exhibition, at the now celebrated Green Gallery in New York, and also including those with Kasmin in London and the Galleria dell’Ariete in Milan. The Tate show was badly received and, after the 70s, Smith’s career developed away from the limelight, although he continued to exhibit at Flowers and elsewhere. The fact that Galerie Gisela Capitain showed his large “kite” piece, Shuttle (1975), at this year’s just-closed Art Basel perhaps signals a resurgence of interest in his work. Examples of his “kites” – hanging shaped canvases – from the 80s and 90s shown here demonstrate that a second full retrospective would be a worthwhile and potentially exciting exercise.

Chronologically, the exhibition begins with the small painting Red Label (1958), made the year before Smith’s first visit to America. Red Label shows an artist already looking across the Atlantic at American painting, particularly the art of Sam Francis, who had exchanged abstract expressionism’s doom-laden, tragic aspects for a more optimistic feeling of aerated liberation. As with Francis, central to Smith’s art is an optimistic sensation of moving into a realm where normal physical constraints do not apply, one remote from the restrictions of the ground and gravity. But where Francis was shown a real world equivalent to these sensations (which run through so much modernist abstraction) in his experiences as a pilot in the second world war, for Smith they appeared in the multiplying advertising images of the postwar consumer boom. “You could drown in a glass of beer, live in a semi-detached cigarette pack,” he once said.

Smith is perhaps best known today for his large shaped canvases of the early 60s, which fused the imagery of packaging with the unreal perspectives, vast size and vertiginous close-ups of billboards and the cinema screen. None of these early shaped canvases are on display here and the exhibition presents Smith as an abstract rather than a pop artist, although both terms need qualification in reference to a career formed by the circumventing of dogmatic positions. The early pop shaped canvases have always seemed to me to be rather unwieldy, out of step with a sensibility whose experimental boldness was more often than not achieved with a temperate, urbane elegance. A larger show of Smith’s work would have to grapple with the question of how a fascination with the mass-media led to work of such a sophisticated and cerebral (though witty) nature. Is it possible or useful to separate the maker of abstracted pop images from the abstract artist with a refined pop sensibility, and if so, how, and when, would the division be made?

Representing the early pop phase of Smith’s work is the small, beautiful painting Lee (1961). This work is one of a pair whose motif is based on the stitching on the back pocket of Lee jeans, presumably then somewhat exotic to English eyes. Smith has focused in on the original design, rendering the source unidentifiable and creating an image suggestive of vapour trails in a brilliant blue sky. The shift is thematically coherent, given the role increasingly affordable air-travel played in the cultural traffic in youth fashion and abstract painting. More important – at least viewed from the perspective of his later work – is the poise and luminosity Smith creates from such simple means. The three white lines generate a sense of rotation, laconically reprising the spiralling structure of Red Label. Rotating or spiralling arrangements run through almost all the works in the exhibition, allowing Smith to create drama, complexity and, crucially, mobility.

Red Label and Lee are both flat images. But for much of his career Smith worked to extend painting beyond the traditional limits of the flat easel picture, in a variety of ways and scales that the current exhibition can only hint at. Conventionally understood, all paintings are at once an image and a physical support. Smith made the division explicit and created – and, crucially, resolved – a tension between the two. His was not a moralistic position, aiming to show up the falsehood of images and replace it with the supposed “truth” of directly handled materials. Rather he was constantly alert to how image and support could be combined and recombined. Even the most physical works in the exhibition remain illusionistic. A limited palette and close tonal range unite Maryland (1972), as do the bands of orange fabric that weave in and out of the canvas, meeting at its centre to form a cross. Brushmarks, rendered with just enough stereotyped regularity to avoid seeming fully naturalistic, evoke light shining through vegetation. The surface-breaking illusion of this deviates from the colour-field painting that Smith is sometimes associated with. The use of an open lattice structure through which light and space appear to filter is the defining characteristic of Smith’s late work, although with much brighter, more saturated and various colour than in his work of the 70s.

Snakes and Windows (1993) is the largest work in the exhibition, occupying the whole of the first gallery. Shown for the first time in the UK, it was originally made for an exhibition in the atrium of a bank in North Carolina, where it was hung substantially higher than Flowers’ ceilings allow. Although this must distort the artist’s intentions, it does so strikingly and successfully. Released from the wall, the hanging canvases form a mobile. The bank’s customers would have had to crane their necks to see it in its original incarnation; here, it is something the viewer moves through, its close proximity disrupting a clear view of the room and of the piece itself. Gently propelled by the air, the canvases twist and turn against each other, a culmination of the rotations seen in Red Label and Lee. Each of their sides are painted a different colour and the hard-edged, graphic motifs have a dissociated relation to the shapes of the supports, as if they were slipping off, or coming in or out of focus. The general effect is of a vivid dissociation, a pleasurable sensation that it is not quite possible to understand the shifting panorama playing out round and about our heads.

Smith’s kites from the 70s, such Shuttle, are some of his most abstract works, with their asceticism containing no obvious vestige of the pop imagery of the previous decade. Snakes and Windows, and the flamboyant Round Flight (1985), nod back toward pop imagery, even if their motifs are invented rather than abstracted from pre-existing sources. In the current installation, Snakes and Windows suggests an inverted and mobilised version of the 1959 installation Place at the ICA, in which paintings by Smith, Robyn Denny and Ralph Rumney were positioned on the floor in a maze-like arrangement simulating the perspectives of the urban environment and its confusion of conflicting images. Could we read Snakes and Windows in the same way? If so – and there are certainly other options – it would perhaps be more accurate to see it as a dream of the modern city, rather than a representation of it. Smith gives us a city aestheticised, brought down to manageable size, twisting in slow and relaxed motion, with its danger removed and its clatter and clutter sweetly suspended.