This exhibition of new work is more pared back than we have come to expect from Barlow. Her aim, she says, is ‘to come back to what is essential’ 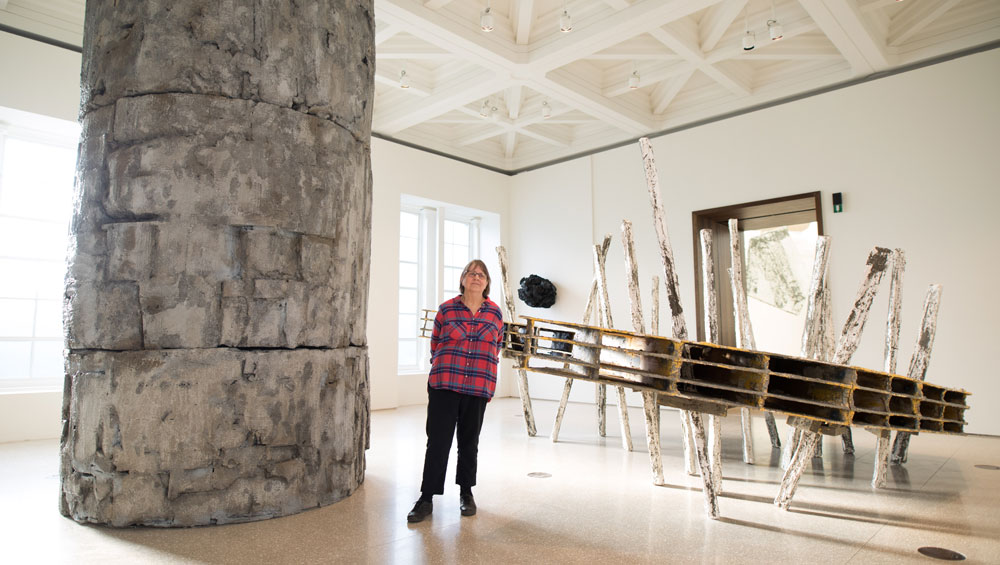 Phyllida Barlow (b1944, Newcastle) is in reflective mode as I creep – slightly late – into the press view for her Royal Academy show, Cul-de-Sac. She is conversing in her customary relaxed, articulate and erudite fashion with the curator Edith Devaney – a style she no doubt honed over 40 years of teaching at both the Slade School of Art and Chelsea. Someone has just asked about one of her early tutors, George Fullard (1923-73), a notable British postwar sculptor, and how underrated his work was. She agrees, and embarks on an anecdote that is quietly revealing of both his influence and her own approach to art. “He had an absolute loathing of the academic ways in which sculpture was taught,” she says. “In life-modelling, he wanted people to approach it in ways that weren’t to do with getting every inch of the figure right, [to] select what they were moved by … He said the best way to learn about sculpture was to look at Laurel and Hardy - when you’re locked into a serious idea of sculpture to go and look at Laurel and Hardy sawing a plank of wood and things flying about. He felt the mistakes you can make in trying to mend things are just as important as craft and skill. He didn’t trust craft, though he understood what skills you might need to make things. His love of clay was really profound … the fact that he felt you should hardly touch clay. Not overwork it in any way at all. Preferably, don’t use your hands much. Find other things to hit it with or slice it with.” 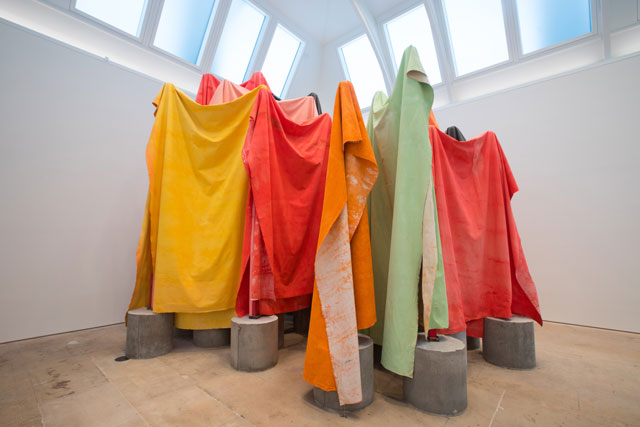 And as easily as that, she lays out several little nuggets of insight glimmering in this one, fluid exposition. Laurel and Hardy is a particularly delicious association; Barlow’s work is filled with a sense of improvisatory zeal and slapstick energy – poles teeter and tilt, piled structures appear on the point of collapse, sculptures so often seem like chunks of infrastructure gouged out of their place (from under a motorway bridge, perhaps, or supporting a seaside pier) and flung into the gallery space with force.

And it chimes with her approach to materials, the expeditious way in which her assemblages of everyday elements - timber, plywood, foam, plaster, paint and polystyrene – appear to have been thrown together, with the minimum of fuss. However, there is a painstaking process of drawings, mock-ups and model-making behind it all. She says: “I draw the whole time. I draw before I make the work, during the making of the work, after I make the work.” She also tells us: “I don’t know necessarily what I’m going to make when I set out making … it begins with the empty space and my desire to apply an action, rather than have an actual image in my head. The work emerges in an almost ad hoc way, almost as if I’m blind.”

This show is her first major British exhibition since she represented the UK at the 2017 Venice Art Biennale. And in many ways, she says, it is a reaction against it. For that show, she crammed almost every inch of the pompous, neo-classical pavilion with her chaotic, colour-drenched sculptures, which spilled – via vividly daubed lollipops on sticks – into the surrounding landscape. This work – all new – is far more pared back. “Removing all the processes that were in a way excessive, to come back to what is essential, has become more and more important during this post-Venice time,” she says. 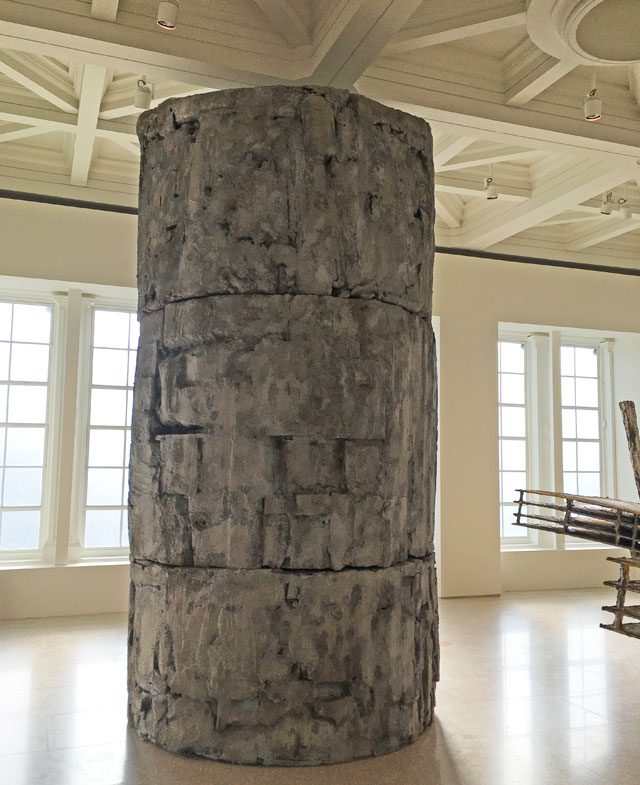 Barlow talks, in an accompanying film shown in the RA’s handsome new lecture theatre, of the importance of nature, but also the fact that sculpture can never compete with nature. It seems to me her work does and can – or perhaps it doesn’t so much compete as converse with nature; for example, in the scale and seemingly ancient solidity of a piece such as Untitled: Barrel (2018-19), in the second gallery. Pushed up against a window, its backlit form casts even more of a presence into the room, like the trunk of an ancient sequoia tree or the column from some antique temple. But her work is so very urban – the materials she uses often inspired by rubble and debris (whether that of household waste or the building site), her colourings taken from the pastel paint markings of highway engineers – and it’s perhaps in the common themes of decay and collapse that both urban and natural inspirations poetically collide.

The choreography of her works in space is massively important: the relationship of the works to their structural envelope, to each other, and to the humans who will circulate around them. It was clearly with real delight that Barlow embraced the Cul-de-Sac (dead end) of the Royal Academy’s three Gabrielle Jungels-Winkler galleries, knowing that visitors would have a chance to experience these works in both forward and reverse modes, as it were, throwing up new juxtapositions and layers as they progressed around it. 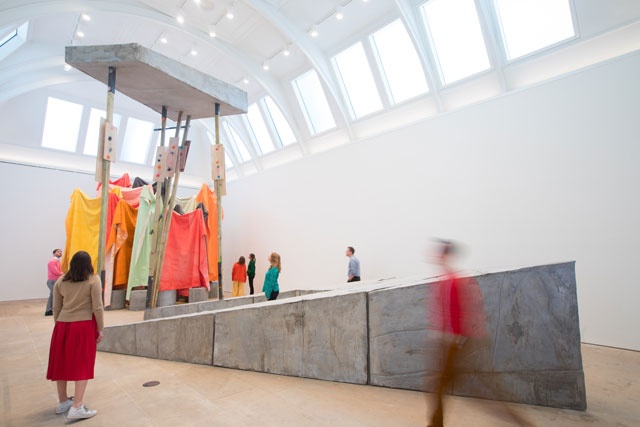 The brightly toplit galleries – newly exposed by the RA’s recent refurbishment – also provide wonderful opportunities to layer additional shadows on to and around forms already inspired by shadow play such as Untitled: Lintelshadow (2018-19), the teetering work that fills the centre of the first gallery, or the Untitled: Shadowplatform (2018-19), which carves a great, tilting chunk of space out of the second gallery, looking for all the world like a dismantled section of seaside pier or oil rig. With the rays of strong February sunlight crisscrossing the third gallery, its multi-legged grouping of Untitled: Scrimtripod (2018-19) and Untitled: Blacksonstilts (2018-19) have a forest-like quality, emphasised by the overhanging box-like “canopies” that crowd the ceiling. 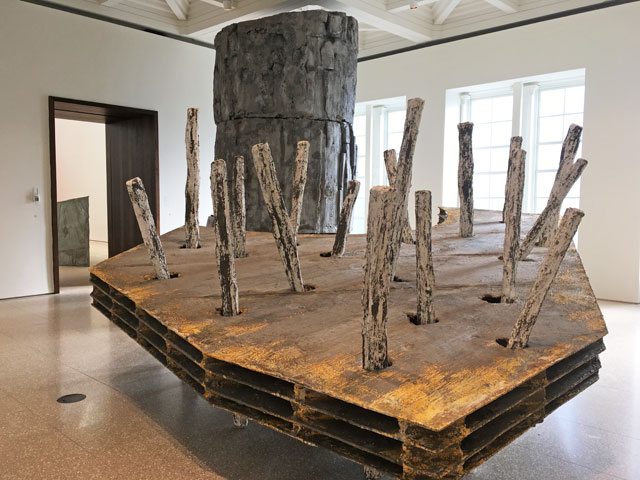 But while there is so much that is uplifting about the work – not least a sense of wonder inspired by that visceral recognition of how soft, small and pliable our human forms are in relation to Barlow’s expressive, bulky, tall and teetering, or slab-like ones, there is also a vulnerability about them, a fragility that speaks of the unsettled and unsettling era we are in now – even if they are more likely an expression of the even more troubling times she so narrowly escaped, growing up in the aftermath of the second world war. While acknowledging her fascination for corrosion and decay in the RA’s aforementioned accompanying film, she refers to the way these structures speak of the human condition, by not collapsing – they are repaired, accommodating of their flaws, accepting and adapting. Now there is a message to bring cheer in these troubled times. 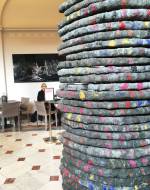 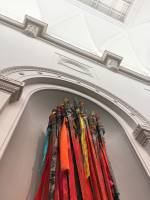 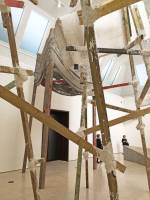 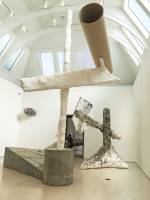