Frank Auerbach’s career is celebrated at the Royal Academy in all the ways in which this institution excels best. Firstly, its rooms are – more than for any other medium – designed for the hanging of painted works. Secondly, the proper sense of occasion, so frequently absent (other than in the party sense) in endless Royal Academy summer exhibitions, is utterly convincing here as redolent of work of major importance. Thirdly, the hanging itself both seamlessly celebrates the individual aura of each work, while allowing a comprehensible sequence reflecting this long, persistent evolution. Finally, Norman Rosenthal’s catalogue (which includes Catherine Lampert’s perceptive article) is superlative. 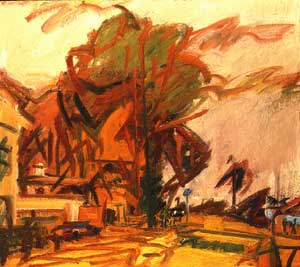 All this achievement begs one major question: why ever has it taken since l978 (the occasion of Rodrigo Moynihan’s exhibition) for the main galleries of Burlington House to be devoted to a single living British painter? But that is also another story, for which the present organisers are in no way responsible. Here in London, at last, we find the medium of paint, and critically for the past few years, given its proper due. Auerbach more than amply fulfils this bargain with posterity, at last filling the void at what is surely a vital moment in contemporary art. The six rooms here allocated (now shared not coincidentally, but deliberately for the planners) with the highly successful ‘Rembrandt’s Women’ exhibition (from the National Galleries of Scotland to 16 December) demonstrate common attributes in the work of two masters – courage, technical risk-taking of an obsessive kind, and a fundamental degree of originality of approach.

Auerbach demonstrates a kind of sombre restraint that embraces brush stroke and palette knife movement that comes at brilliantly timed and placed intervals. As Rembrandt’s more intimate works remind us, intimacy between the artist and the subject being painted is a fragile knife-edge, readily destroyable by one more or less indulgent brush stroke, one liberty too many imposed from either one to the other. Whether for Rembrandt’s inconstant exploitation of Stoclet, or Auerbach’s persistent dependency on Stella West as his own companion and sitter (EOW titles) over twenty years, this runs true.

Auerbach was tutored by David Bomberg: Bomberg was taught by Sickert. While it is appropriate to place Auerbach against the precedent of Soutine and Kirchner, his work also connects with that of closer contemporaries such as Giacometti, and New York -based de Kooning. Pervasive in this line-up is the experience, the tangible evidence of such intimacies of contact.

Catherine Lampert, in her catalogue essay, has diligently pursued this aspect of Auerbach’s work, his portraits, or better-described ‘heads’ (as in the room specifically dedicated to People); she has explored his relations with the people he painted here, as well as commenting on her own role as a sitter. Focussing on the perceptible presence on these occasions of ‘personality’ as transfigured by Auerbach, she finds that he explores this kind of aura quite obsessively. The sitters invariably tend to be well known to the painter, yet social presence is not acknowledged other than as a front to be opened up in the process of work in progress.

Bryan Robertson has referred to the way Auerbach uses paint ‘as an alchemist might employ known materials in a magical way in order to effect a transformation, so he manipulates paint almost as a mysterious vehicle which might, at a certain moment, suddenly reveal a new truth, an original disclosure, as well as embody a moment of perception.’ Since such comments were made, in ‘Private View’ (l965), Auerbach has developed the brilliant talent that he then possessed more and more. Each painting has emerged through this alchemical process. We see two phenomena: firstly the presence of developing technique and compositional system over the decades. This is accompanied, quite distinctly, by the self-evident metamorphosis of Auerbach’s own perception of his subject, whether a human subject as site, or the series of studies of building sites literally, as painted in the past two decades. In every case, the result is wholly within the artist’s tautology, and yet entirely unique and original too. 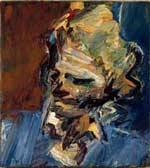