The Swiss duo play with viewers’ habits and expectations, but they demand to be taken seriously at this game

The art of Peter Fischli and David Weiss thrives on irony and paradox. Not only do the artists play with the viewers’ habits and expectations, but they demand to be taken seriously at this game. Their current retrospective at the Guggenheim Museum announces their aesthetics of serious play in a freestanding miniature building, complete with three stories and a ground floor, placed in front of the museum’s entrance. The building is not tiny – the size of a small room perhaps – but neither is it large enough for a person to walk inside and feel comfortable. Although it looks just like a regular nondescript concrete office building, its size and an occasional conspicuous detail – such as round knobs on the front door – make it appear slightly uncanny, reminding us of a concrete materialisation of a very mundane, unremarkable dream. Fischli (b1952) and Weiss (1946-2012) invented this commonplace facsimile of a building in 1985 and erected it in various urban settings a few times before they positioned it in front of the Guggenheim. Next to Frank Lloyd Wright’s masterpiece, the building looks emphatically lacking in grandeur and originality, if not ambition. If this model positioned outside the museum gives us the first taste of the artists’ ironic style, the installation inside the museum provides us with a good sense of the onset and development of their career.

Fischli and Weiss, who began planning for this retrospective before Weiss’s death from cancer in 2012, worked in many media, including photography, sculpture and installation, but taken as a whole, their oeuvre is based on film, because it uses cinematic devices to construct and develop a narrative. This narrative is basically self-referential, offering an extended commentary about the artists themselves, their environment, and their aspirations and ambitions. In 1980, the pair – who at that time had had some success with their Sausage Series in their native Zurich – found themselves in Los Angeles. It was there that they made The Point of Least Resistance, a film about a pair of wannabe celebrities looking for ways to become rich and famous. Donning the costumes of a rat and a panda bear, which became their life-long alter egos, the artists staged a narrative about a hilarious adventure in the capital of the film industry, complete with art, a murder mystery, expensive villas, ruminations about the meaning of life, and harebrained schemes of enrichment. Towards the end of the film, we see Rat and Bear realising one of these schemes through assembling the book Order and Cleanliness, a collection of complex schematic illustrations about human sentiments and their relation to the world. In the film, we expect the hapless pair to fail in their naive endeavour but, in real life, the film and the book paved the way for its success.

Illustrations for Order and Cleanliness are among the first works we see after entering the exhibition. Their meticulously assembled installation on the museum’s wall allows viewers to examine them closely. Here, we can scrutinise the intricacies of “adapted behaviour”, for example, a schema resembling a figure eight, with its network of neatly subdivided and opposed feelings, actions and attitudes. In another schematic representation of human relationships, the worlds of “technology” and “love” are featured as two freestanding trees whose roots and branches never meet. Apparently, these unconvincing diagrams parodied the drawings of Rudolf Steiner (1861-1925), the founder of anthroposophy, a philosophy that propagated existence of objectified spiritual realities, which could be accessed and experienced through intellectual quest. By their ironic appropriation of Steiner, Fischli and Weiss turned anthroposophy’s pronounced intellectualisation and objectification of feelings into a visual idiom, which resulted in an overt anal tenor to their work.

Order and Cleanliness was followed by Suddenly This Overview (1981-present), a large body of work consisting of miniature sculptures illustrating well-known or trivial events or everyday objects that stay in people’s imagination. The cinematic turn made the artists give elaborate titles to each object or scene, reminding us of subtitles in silent films. The titles range from one-word, such as Forest, for example, illustrating nearly impenetrable vegetation, to miniature stories, as in “Once Upon a Time, There Were Two Sisters. I Remember It as if It Were Yesterday. The One Named Adelheid Was Lazy And Full of Vanity. The Other, Named Kitty, Was a Good Girl,” showing us two human figures huddled together. Made of unfired brown-grayish clay, these amateurish-looking renderings of images and scenes that may arise in people’s minds whenever they think about a particular occurrence differ only in the subjects they portray. Uniformity of material and colour, and a seeming casualness of execution, make Peanuts, Anna O Dreaming the First Dream Interpreted by Freud, or James Dean’s Tragic End look vaguely scatological. This tendency continues in Gray Sculptures, which appeared in two instalments, 20 years apart, in the mid-80s and mid-noughties. In these greenish-gray polyurethane works, Fischli and Weiss frequently show insides of various passages, such as a beanstalk, an ear, a tube, or a labyrinth. The focus on the inside of a passage culminates in Kanalvideo (1992), a stunning footage of the Zurich sewer system made with cameras attached to robots inspecting the sewers. Because the turns and stops the robots made were edited out of the video, viewers are confronted only with a constantly recessing black hole towards which they are perpetually advancing. Artificial light illuminating the footage makes the hole appear sun-like, conflating the sacred and the profane in the manner of surrealist philosopher Georges Bataille in his text L’Anus Solaire (1931).

Even though Kanalvideo marks the symbolic height of Fischli and Weiss’s career, the penchant for the obscene reflects only one aspect of their prolific output. A significant part of their work is mischievous and playful, using makeshift constructions as the main element of design. Equilibres (1984-86) is a series of photographs in which everyday objects are chosen in such a way that they can be put together and maintain a precarious balance long enough to allow a photograph to be taken. In the film The Way Things Go (1987), the artists recorded perilous experiments in their studio, in which things erupted in flames, collapsed and caused floods through simple mechanical interactions prearranged by the artists. Because neither the photographs nor the video capture the artists themselves, the objects appear to have a life of their own, balancing or moving randomly to achieve a particular effect. In fact, Fischli and Weiss expended much effort to balance the objects just long enough for the photograph to be taken or to make them move to achieve a desired effect in the video.

In their new-media identity and preoccupation with play, Fischli and Weiss hover between pop, readymade, surrealism and conceptual art. Like pop, they use ordinary objects to make statements about everyday life. Like readymade, the objects they make appear indistinguishable from things in real life, challenging our notion of uniqueness and beauty. Like surrealism, they are concerned with our dreams and the unconscious, in what stays underneath the surface of civilised realities. Like in conceptual art, they make use of overt codification – whether textual or visual – to convey their message and frequently make the codifying process itself the subject of the work. The synthesis of styles that makes up the unique Fischli and Weiss artistic identity is demonstrated most clearly in large installations, which are precise copies of the artists’ working environment – complete with paint cans, boards, nails, rain boots, empty canisters and pizza boxes and myriad other bric-a-brac that lay around artists’ studios – but made entirely of polyurethane and painted appropriately to match their real-life appearance. The degree of precision with which the copies are made, coupled with the absolute dullness of the subject matter, is disturbing, as what becomes clear is that Fischli and Weiss highlight not so much the objects, but the process of work itself and its simultaneously obsessive and deadening quality.

The Guggenheim curators have done an excellent job installing the exhibition, generally maintaining the chronological sequence of development of the artists’ oeuvre, but also allowing for digressions in cases where it made sense stylistically or conceptually. For example, the decision to display the bare and minimalist-looking Walls, Corners, Tubes (2009-12) together with the Kanalvideo (1992) was an excellent one, as the video projection both mirrors and amplifies the artists’ focus not on the perfection of form, but on the content of the object – namely, the inside of the tube. Also, the exhibition’s end in the Tower gallery on the second floor highlights the dual nature of Fischli and Weiss’s oeuvre. On the one hand, we have a lighthearted and playful psychedelic lightshow of Son et Lumière (1990) and hilarious questions projected in a darkened room pondering if it is “hard to imagine an empty universe” or “what percent of me is animal”, and on the other, a room with The Raft (1982), an early work in which Fischli and Weiss first used polyurethane foam to construct their replicas of reality. The Raft, filled with objects that looked uncanny because of their life-like appearance but absolute estrangement from real materials in the actual existence of these objects, exemplifies the obsessive aspect of the artists’ oeuvre, the one that resembles a boring, debilitating dream in which nothing magical ever happens. The museum also produced an excellent catalogue, which I recommend to anyone who is interested in investigating the work of this exceptional pair of artists. 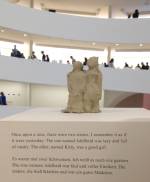 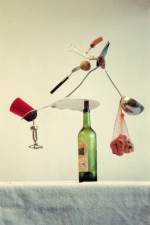 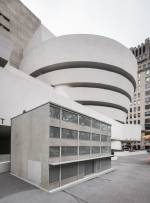