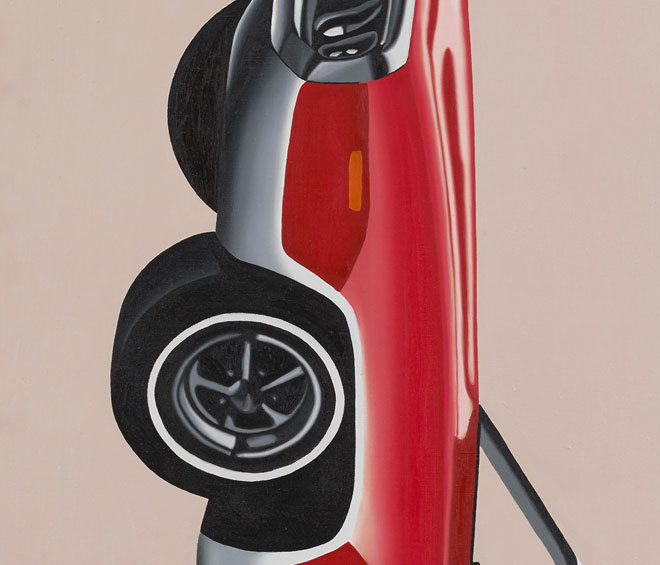 There are few more potent symbols of the American Dream than the shiny new automobile, fresh from the showroom: its glamour and pulsating functionality is the hallmark of social mobility, the means of escape from dull suburbia, the motorised extension of human physical capabilities that allows man, temporarily, to become machine. From The Great Gatsby to Grease, cars have served in American culture as symbols of power, allure and idealised substitute for the (masculine) self. In 1996, MoMA held an exhibition dedicated to the Jaguar E-type sports car (“These machines engender emotions … aroused by few man-made objects”); today, one of these remains on show in the collection galleries, not many steps away from the Matisses and Monets. Now, a retrospective exhibition at Matthew Marks Gallery of the artist Peter Cain displays huge, forensic paintings of cars, strangely truncated yet irresistibly seductive.

Cain was born in 1959 in Orange, New Jersey, and died in New York in 1997, of a cerebral haemorrhage at the age of 37. The legacy of his short career, in which he showed work at the Whitney Museum of American Art’s 1993 and 1995 biennials, is 63 paintings, as well as drawings, sketchbooks and preparatory photographs, of which a wide selection made between the late 1980s and 1997 are on show here. Cain’s primary preoccupation, and the subject insistently returned to across this exhibition, is the automobile, his large-scale paintings a strange and arresting combination of motifs from surrealism and pop art. Front and back ends of cars merge imperceptibly to create smooth, hybrid machines that stand poised for action, or balance, upended, on their sleek noses or their Cyclopean single wheels. The luxury is palpable from the gleaming boots and bodies, the shining vehicles offset against stark, synthetic backgrounds. Yet these cars also exude an air of menace: with the driver and passenger seats missing, they are a distortion of the familiar from which human power is eliminated. Cain’s radical crops distort the subjects even further, reducing the cars to disembodied limbs: the glaring red headlight (as in Glider, 1995), the trunk, captured in a moment of stillness as it whizzes by (the intriguingly named Coward, 1993), the dramatically squeezed version of the back of a car in Omega (1993), its wheels and rear lights bizarrely close together.

“Cain’s great accomplishment,” wrote art critic Jerry Saltz, “is that although all of his paintings derive from photographs, none of them picture the world as if seen through a lens.” His paintings are worked in a hyper-real style, yet the forms they depict are impossible – several are upside down, defying gravity, as in Untitled (1990), or EP 110 (1993), in both of which a car coolly hangs from the ceiling. Based on advertising images – the most exaggerated, idealised form of photography – they are devoid of life at the same time as they defiantly, acrobatically suggest it.

In 1996, Cain began examining the oases of urbanity on Los Angeles highways: his drawings and paintings of gas stations’ grim forecourts and convenience stores are displayed together in the next door gallery. No people are shown in his scenes, and all words and logos have been erased from the signs, creating the disquieting, whitewashed atmosphere of a toy land, stark in colour and blank in detail. (The photographs he worked from reveal the features that he has eradicated – the word “full” written on a petrol pump, the advert on neon green for “fast fill-ups”.) Although the settings he paints are human, his simultaneous attention to and disregard of small features – foliage, sky, the shape of the petrol pumps – renders these works, like the car paintings, almost experiments in abstraction. Also shown are paintings and drawings from 1995, based on photographs of Cain’s boyfriend Sean on a sandy Florida beach; cropped like the cars to reveal only the figure’s shoulders, neck and head (turned away from the viewer), they are simultaneously intimate and distancing, the bright colour of Sean’s skin standing out poppily against the nondescript grey background.

Cain regularly worked from photographs, cut from magazines, which he cropped and mounted on boards (several of these are on display here in glass cases). Many of his collages – two or more cars fused together, their advertising captions also spliced (“Its sensuength”) – are on public display for the first time, and provide an important insight into the artist’s process and imagination. Alongside these are several source photographs and notebooks from Cain’s archive: “Explore the limits of failure,” counsels one note, found in his studio after his death; “More courage and less oil,” states another. In his sketchbooks, cars pile up across the page like jams at tangled junctions, while a notebook charts the possible titles he considered for new works: by Bonneville, Los Angeles Loves Love and Glider he has written “used”, by Hollywood Stampede “no”. This vibrant retrospective is testament to the imaginative power of the synthetic; Cain’s robot-like machines are reminders both of human strength and fragility. 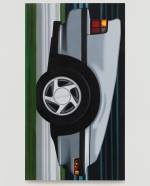