Listening to the Lines

Listening to the Lines

Through the work of eight international artists and architects who explore the versatile but universal perception of line, this exhibition invites viewers to explore the many configurations of that simple, fundamental motif

Line defines shape and border, and differentiates one from the other. The exhibition at Ginza Maison Hermès, Tokyo, brings together a versatile representation of line, from an art installation by Berlin-based Japanese artist Asako Tokitsu, who has been working solely with line for more than 20 years, to 48 drawings by German multimedia artist Carsten Nicolai that show grid patterns derived from mathematical formula and moiré drawings reminiscent of sound wave, to purely unintentional lines found in natural mineral such as agate.

Many of the works on display are newly commissioned for the exhibition. The curator says: “From straight line to angled, curvaceous line, line is the fundamental motif in human creation from art and science to everyday life. It is universally found in all cultures as a means of representation. As it gradually gets into full flow, the lines unfold into different expressions. However, our perception of line is predominated by visual perception. I wanted to challenge this notion and invite people not only to ‘see’ but to ‘listen’ to diverse ways of perceiving line.” To achieve this, she carefully selected artists whose works allow new ways of appreciating line. One of the most compelling outcomes of line is shown in nearly 60 specimens of agate minerals from the extensive stone collection of the late French sociologist Roger Caillois (1913-78), which is now held by the French National Museum of Natural History. Caillois collected minerals and polished their sections in order to examine the configuration they reveal. We see an agate that Caillois named “Le Lagoon”, marbles from Tuscany that seem to resemble a landscape, while jasper from Oregon mesmerises us purely with its configuration of lines. These patterns are “archives of geology”; an inscription of the condensed time and the specific location. Viewers will probably experience the same fascination that Caillois found in lines that are omnipresent in nature.

While Caillois’ viewpoint leads us to discover line in nature, the works of Japanese female artist duo Akiko and Masako Takada (b1978) allow us to discover nature through lines. The Takeda twins’ photographic work Maze Garden (2009) is a tiny maze designed like an archetypical formal garden, using moss in the corner of a garden that is then captured in a photograph. The photograph offers a new view on the usual notion of a maze – that it is made of lines that humans are guided by and sometimes trapped in. “People enter the maze and head for the exit. We use the maze as symbolic of human life from birth to death,” explain the sisters. They show another work, Fujisan (2009), in which a map of Mount Fuji has been painstakingly cut out, leaving just the contour lines of the mountain on the map. Meticulously cut by hand, the fragile work is like lace art. A close look at the map reveals information such as “Fuji Yoshida entrance” and countless information on altitude along the contour lines, information important for mountain climbers to understand the mountain. Although extremely decorative, the work of the Takada sisters allows the visitor to find out about the beauty of nature highlighted by lines.

Nicolai (b1965) is also fascinated by line, though his are not strictly lines that derive from nature, but logical lines. “I am always fascinated by grid and moiré patterns that are the visualisation of mathematical rules,” he explains. His interest led him to research how these patterns are generated, by looking into mathematical rules and superimposing lines, which he documented in the form of drawings as a reference for his own creative source. For the exhibition, Nicolai chose 24 patterns of grid drawings, including quasiperiodic tiling and sine cardinal function, from his archive, as well as 24 patterns of moiré, including random noise pattern. It is eye-opening for viewers to discover these representations of grids and moiré that are not of human creation, but more of a logical visualisation of mathematical rules. Japanese architectural practice Atelier Bow-Wow also applied a grid pattern to the wooden shelving system, called Manga Pod “Giant” (2002), which is used as a backdrop to display Nicolai’s grid and moiré drawings. The wood panels swivels so that the whole thing can be adjusted to any space.

Line touches on our everyday life as well. For Ignacio Uriarte (b1972), a German office worker-turned-artist, rubber bands, office paper and a Bic stylus pen ­– things found in an office desk – become intriguing material for artwork. Hundreds of rubber bands in four different sizes are formed to make Rubber Band Circle. Even with only four sizes, each rubber band can change into endless shapes, adjusting itself into the void. The work is reminiscent of vascular plants. Uriarte explains: “The process of making this artwork comes out from efficiency, but the result comes out organic. It is just like what nature does: it changes its shape in order to solve the situation.”

To link one gallery space in Le Forum to the next, Swiss artist Niele Toroni’s dot work was included. His brushstrokes, made with a No 50 paintbrush, are repeated at regular intervals of 30cm in the corridor of Le Forum. Repetitive imprints of red paint arranged at regular intervals don’t seem to have a connection with nature or line, but reveal the artist’s obsession with the physicality of painting. “My intention is to bring back the notion that, as Wassily Kandinsky wrote in his book Point and Line to Plane, any line and its further configurations starts from the point,” the curator says. “The imprinted painting that Toroni (b1937) he has been consistently doing since 1967 presages that art starts from here,” she explains. Taking the physicality of Toroni’s work to full flow, Tokitsu (b1965) has drawn lines over the whole gallery space, from the floor to the walls, to the eight-metre high ceiling. The lines whiplash like ribbons of rhythmic gymnastics in dialogue with other works in the exhibition: sometimes the lines are superimposed over other works, but occasionally the lines end so that when seen from a certain point in the gallery, the lines superimposed over other artists’ work form a continuous line. It is joyful to watch visitors moving around, looking up and down to find the viewpoint where the line is drawn over the flat surface, but in the cubic space.

Whether it is for the purpose of painting, calligraphy, or designing a product, making a line comes out of the struggle and ultimate decision of the human being. Creators had to look for source and inspiration to start the line. And one of the first industrial designers, Christopher Dresser, who was also a botanist, championed forms found in nature to be adapted to the arts and art manufacturing as early as the 1850s. The exhibition spurs many thoughts on the simple notion of line. It leaves the visitor breathless with the beauty of lines formed in minerals and admiring the obsession of human nature to create time-consuming lines at the same time. In the end, what the lines represent is all in the eye of the viewer. 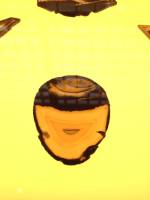 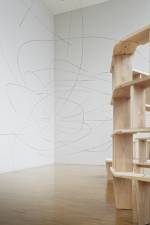 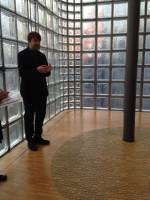 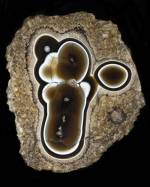 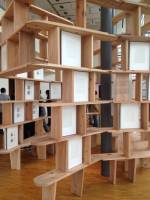 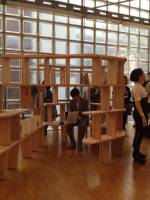 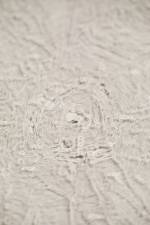