This biennale is determined to take account of residents, focusing on micro-housing and smaller residential complexes and involving community as much as architecture 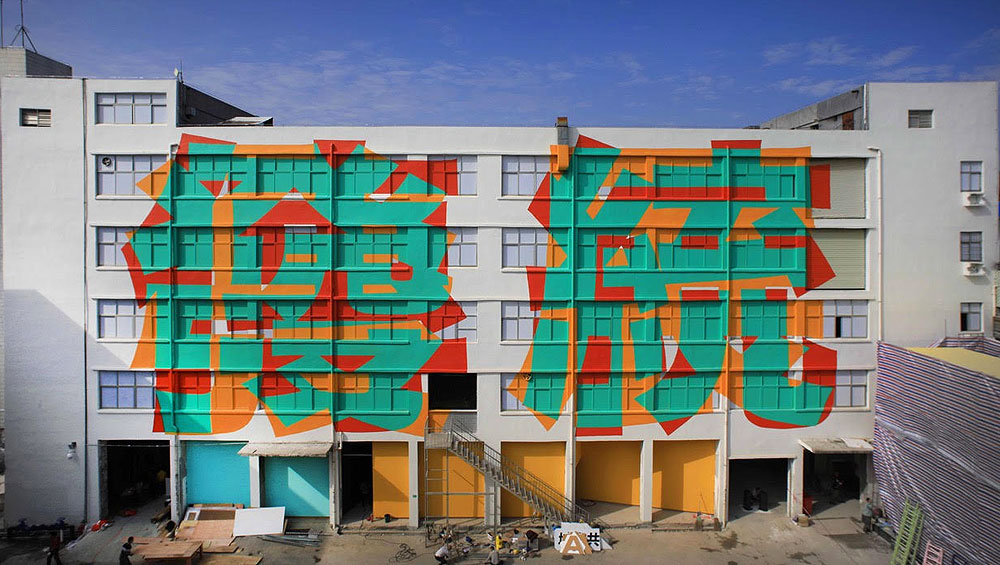 Deviating from past editions, which were located in once-abandoned, now highly developed industrial zones such as Overseas Chinese Town East and Shekou, the 2017 Bi-City (Shenzhen and Hong Kong) Biennale of Urbanism / Architecture (UABB), Cities, Grow in Difference, chose Nantou Old Town as its primary site. It is a densely populated “urban village” in Shenzhen with a history that stretches back 1,700 years. (Shenzhen, China’s first designated special economic zone, has usually been described more dramatically as a small fishing / market town on the Pearl Delta across from Hong Kong that has exploded in the past three and a half decades to become an economic powerhouse populated by an estimated 12 million people, a number that fluctuates since it is a city of migrants who come and go during the year.) 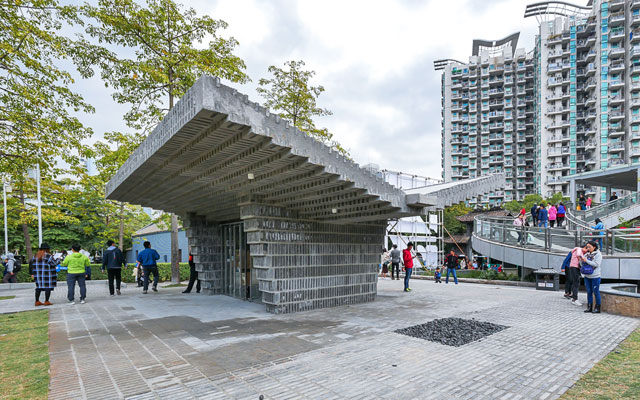 These urban villages – think of Beijing’s largely demolished hutongs (narrow streets or alleys) and courtyards – are in “critical condition,” says Meng Yan, who is one of the principal curators for the biennale as well as a prominent Chinese architect and co-founder, along with another lead curator, Liu Xiaodu, of Urbanus Architecture & Design. UABB participants, through the years – this is the biennale’s seventh showing since it began in 2005 – have offered countless suggestions regarding future urbanisation plans for the region. This one is focusing on micro-housing and smaller residential complexes as an alternative to the ubiquitous glass towers that have dominated the megalopolises of Asia and elsewhere. The policy of the city with regard to these villages has also changed. Once, officials would simply demolish them, condemning them as overcrowded, squalid fire hazards, the low-rise, literally named “handshake buildings” so close that residents could lean out and grasp their neighbour’s hand. Now they are being reconsidered as a viable means of housing and worthy of preservation, serving as a new model for urbanisation rooted in historical precedent as a way to shape the metropolis’s future more coherently and richly, exploring the idea of a southern city as a template.

Liu Xiaodu declares: “We had a theme and a strategy, then we found participants and projects; we did not want to emphasise famous artists. Some exhibitions will be changing, some will involve the street, the plaza and other outdoor spaces.” The goal was to arrive at a “more complex definition of the street, one that is not nostalgic and a reshaping of public space that in turn will reshape private space,” forming new community and architectural relationships. He continues: “This biennale is different because we introduced our projects into a space where people actually live. We had a different spatial vision, a more natural, organic one; our resolutions are not solutions. We wanted to minimise intervention and disruption and let the residents decide how to use what we introduced. It should be maintained from the bottom up.”

Indeed, the curators said that some of the residents initiated their own regenerative projects in response to those of the biennale.

The artistic director heading this generously budgeted, city government-sponsored exhibition is Hou Hanru. A prolific, highly regarded international curator and writer, he is currently the artistic director of MAXXI in Rome, Italy’s national museum of 21st-century arts. Hou’s area of expertise is visual arts, unlike the directors of past biennales, who have come from the field of architecture and design. It should be no surprise, then, that visual artists in substantial numbers are included among the presenters, most of their work installed in two vast industrial buildings, the interdisciplinary dynamic between art, architecture, design and urban planning enlivening, expansive and more representative of the realities of cultural synergy and exchange.

The biennale is divided into three sections, Global South, Urban Village and Artmaking City, with Global South (and its subdivisions, South “South” and The Other South) as an overarching umbrella that shifted the conversation from an east-west experience and orientation to south-south, a less familiar opposition. All three sections are informative and imaginative, and are bolstered by an ambitious programme of speakers, workshops, and screenings scheduled throughout the biennale’s three-month run. 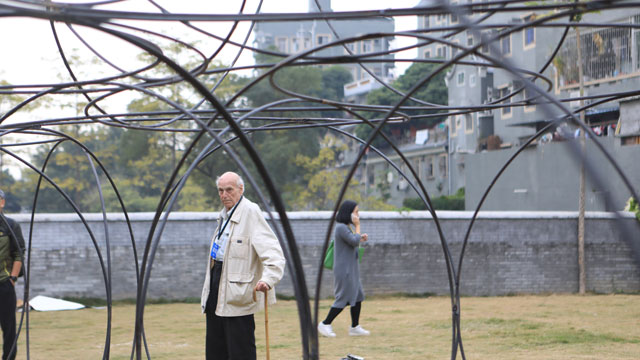 Yona Friedman with Street Museum, an interactive, collaborative work located in the park at the entrance to Nantou’s main gate.

Among about 230 architects and artists (including members of collectives) invited from more than 25 countries is the Paris-based, Hungarian-born experimental architect and theorist Yona Friedman, whose influential ideas about mobility, informality and improvisation are a dominant thread stitching together the exhibition. His contribution is Street Museum, an interactive, collaborative work located in the park at the entrance to Nantou’s main gate. 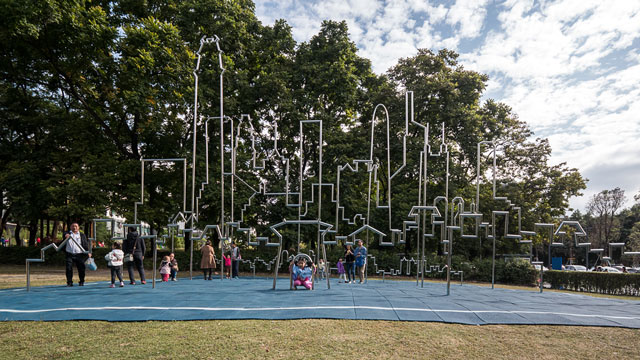 Opposite it is Beijing-based artist Yin Xiuzhen’s Arena (2017). A metal monkey bar-like structure meant to be climbed, it is an outline of Shenzhen’s skyline, which ranks fourth in the world for the number of its skyscrapers. 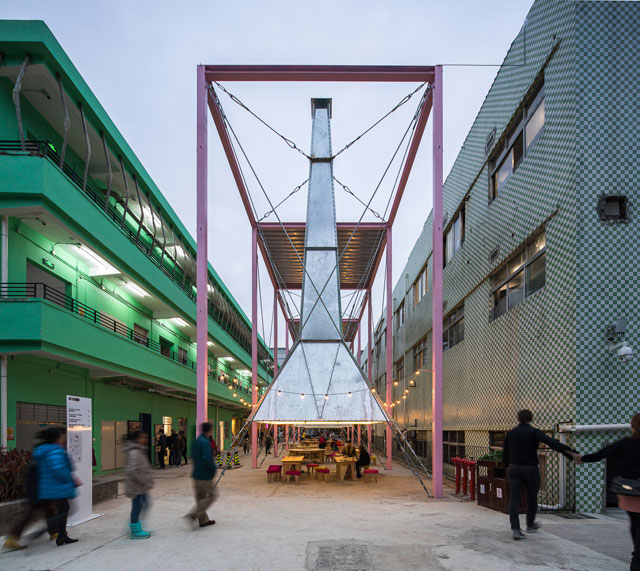 Atelier Bow-Wow from Tokyo designed a series of gigantic, handsome, sleekly configured metallic hoods suspended over giant industrial fire pits surrounded by tables, benches and sinks, braced by a spare, pink metal scaffold. It was intended for communal cooking and eating, a meeting point for locals but the barbecue the collective had planned was cancelled because of a recent ban on cooking in public spaces as a way to regulate air pollution. Nonetheless, the collective remains upbeat, curious to see how local residents will transform and use it.

Another standout is the Madrid collective Boa Mistura, best known for brightly coloured giant murals that billboard entire buildings in painted images and text worldwide, often in poor neighbourhoods such as the favelas of São Paulo. The members of Boa Mistura work in collaboration with local residents and believe that painting is an act of purity and an easy way to communicate. They transform not only places but lives, citing, as one example, a drug dealer who became an artist. For Shenzhen, they created Pingheng (balance, equilibrium): Understanding Chinese Reality on the huge facade of the main venue. In addition, they found a less conspicuous, smaller wall where they painted a mandala-like image in black and white whose Chinese characters, Taihe, translate as Supreme Harmony, a gift to the village. 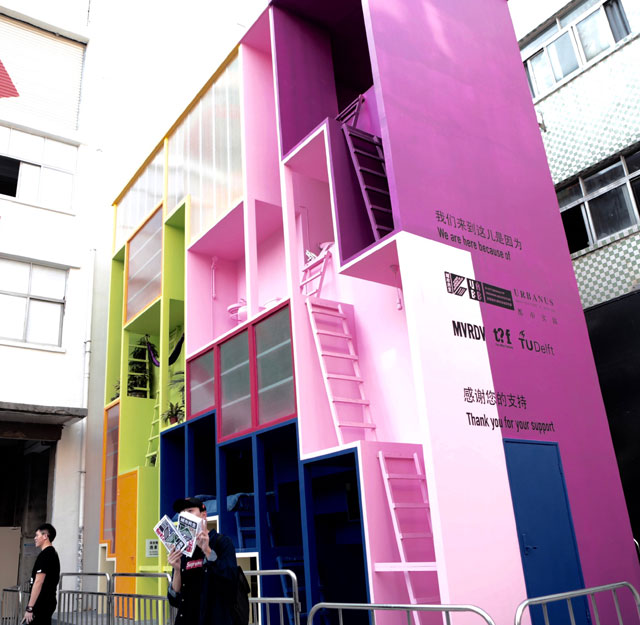 Wego by MVRDV – The Why Factory, from Rotterdam.

Nearby Pingheng is Wego by MVRDV – The Why Factory, from Rotterdam. This is an extra-large, ingratiatingly pastel modular structure viewed as if in cross-section. It is backed against a facade and is divided into prototypes for living spaces that, like several other projects, are predicated on the desires and needs of the tenants, their plans negotiable and flexible. 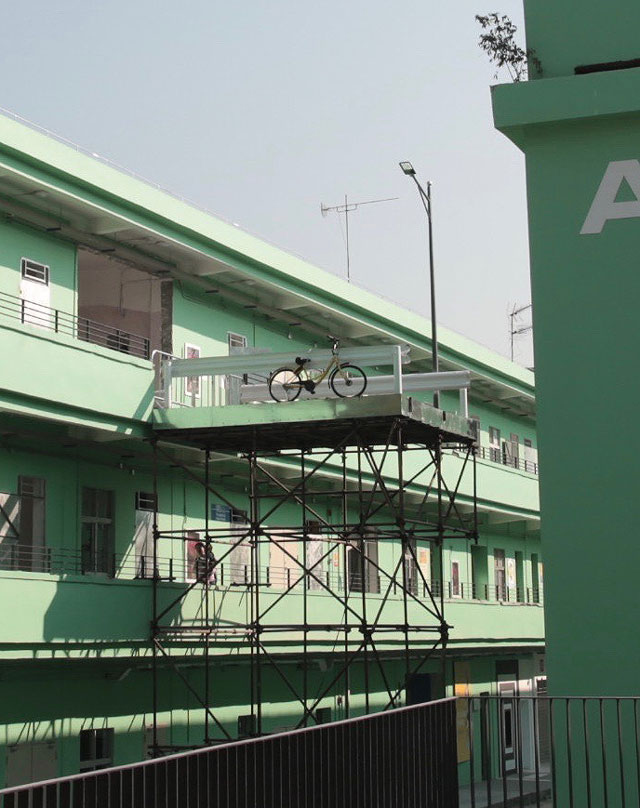 Jutting out from both sides of another industrial building that parallels the main venue, and visible from below as a curious terrace of sorts, is Japanese artist Tatzu Nishi’s continue forever. He sliced through the walls of a third-storey room and inserted a section of paved road across it as the floor. With the road came an actual car and other domestic objects placed inside, while, outside, a bicycle is lashed to the guard railings of one overhang. The fragment of road ends abruptly, with nothing to prevent someone from stepping out into air. Nishi always makes the spectator intensely aware of the character, and, usually overlooked, constituents of public and private space by taking the familiar out of context and edging it with a certain precariousness, in this case the destructiveness of urbanisation.

Lin Yilin, a New York-based Chinese artist, has used the shops that line one of the principal east-west streets (wider than most in Nantou, but still relatively narrow) as the inspiration for his performance. He talked to each of the shopkeepers, measured each storefront and purchased the products that each sold. He then arranged the items – fruit, pastries, buns, meat, appliances, housewares, electronic devices and so on – in a line that extends half the length of the town. Turning the “shops inside out,” he says, subverted the basic tenet of a consumerist ethos. By making everything accessible and literally in the street, he questions the usual relationship of exchange between shopkeeper, customer and object, the individual reactions of the people passing by – which run the gamut and included strong disapproval for wasting food – a significant aspect of the performance.

One disturbing event at the UABB indicative of heightened political tensions and escalating government control in China was the arrest of French-Chinese artist Hu Jiamin and his wife, Marine Brossard, a French citizen, on 15 December 2017. Their mural, Time Discrepancy, depicting an empty blue chair inside a room with a barred window, dedicated to the late Liu Xiaobo, the long imprisoned Chinese dissident and Nobel peace prize laureate, was censored. The government had refused Liu permission to go to Oslo to accept the prize in 2010. The empty chair, on which the prize was placed, has become emblematic of that refusal and Liu’s now eternal absence – he died of cancer in July last year while in state custody. Hu and his wife disappeared for nearly a week, although they are reported to be back in Lyons.

While the UABB has much to commend it, with abundant proposals and projects of note from the utilitarian to the utopian and futuristic, there is always the question of gentrification and what happens after the biennale is over. For instance, once Nantou has been beautified, will the migrants and those people on lower incomes who are renting there now still be able to afford it? Will the government hold big development and costs in check? Past biennale sites have become areas of exclusivity for the wealthy and tourists, a model seen frequently everywhere. When asked, the curators said that UABB has little power, it can only research and suggest, but the government does seem open to new resolutions, and they are optimistic.

A young resident of Shenzhen said she was hopeful when she saw what was being done in Nantou, with its new bookstores, a community centre, performance spaces, espresso bars and the many cultural events taking place, welcoming the excitement and the crowds of international artists and visitors. Gentrification doesn’t frighten her, but she wondered what would happen in three months, when the biennale is over.