Paula Rego: The Boy Who Loved the Sea and Other Stories

Paula Rego: The Boy Who Loved the Sea and Other Stories 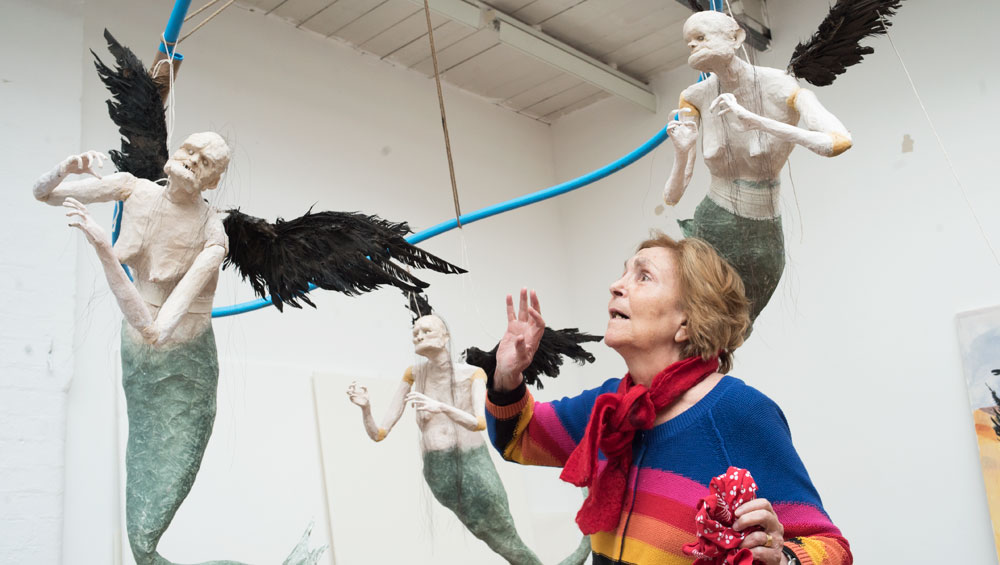 The Jerwood Gallery almost sits on the beach. The sea is only a few metres away, eternally teasing the shingle. Pressed up against its back are a tangle of shacks and boats with tattered flags and, at the gallery’s flank, Hastings’ imposing fishing net huts stand tall, windowless and black, looming up like the monoliths of a forgotten people. Opposite, on the other side of Rock-a-Nore Road, on the roof of the Dolphin Inn, a mannequin dressed as a fisherman in yellow waterproofs, sporting a black beard drawn in pen, looks down at the comings and goings. And behind the inn, the pockmarked sandstone cliffs, once a haven for smugglers, now stand off limits.

It is hard to imagine a more fitting location for an exhibition of Paula Rego’s work. The Portuguese artist (b1935, Lisbon) grew up near the sea, and some of her images could have been lifted from this town. Rowing From Ericeira (2014) shows Prince Manuel fleeing Portugal with his mother in a tiny dinghy following the assassination of his father and brother. The elderly woman is dressed in furs and scarves and still clutches her handbag. The pained look on her face is so perfectly and simply described – Rego does much of her storytelling through expressions. The sandy cliffs that loom up behind them could easily belong to Hastings. Jerwood Gallery director Liz Gilmore recognised that artist and town should be united and raised the money to bring Rego’s work to this fishy corner of the south coast through crowd funding. Hastings is not a wealthy place, but many donations came from local people.

The Boy Who Loved the Sea and Other Stories is an exhibition full of colour and imagination. The eponymous tale was written by Hélia Correia in 2005 and centres on a child who believes that his father is the sea. Having never seen the ocean, he sets out, after a series of family tragedies, to reach the shore, but on doing so immediately dies. Rego’s illustrations for this tragic tale are vibrant and busy, packed with animals and characters, but the last image, that of the boy, lying naked and blue on the sand like a broken doll, the sea licking his feet, is comparatively sparse. Our attention is completely focused on this strange figure, who, in death, has become frozen like a wooden saint. Tilt your head to the side and he becomes Jesus on the cross, a martyr to neglect.

Somehow, even the darkest images are life affirming. Everything Rego creates has a joy to it. Even her Depression Series (2007) – which she produced while going through a particularly bad bout of the illness – is a celebration of colour and form, executed with her signature theatricality. Her close friend Lila Nunes posed for these pastels, which Rego made to “draw her way out” of her despair. She stored the pictures in a drawer without a thought of ever exhibiting them, until they came to light 10 years later, when her son, Nick Willing, was filming a documentary on his mother’s life. Paula Rego: Secrets and Stories was released earlier this year and sheds light on episodes of the artist’s life that even her closest family were unaware of. Some of the most shocking events happened during her time studying at the Slade in the 1950s. Encounters between male and female students all too often led to abusive behaviour and even rape, and as a result illegal abortions were common. Rego, too, suffered through one.

Paula Rego. Get Out of Here You and Your Filth, 2013. Pastel on paper. Courtesy Marlborough Fine Art.

Rego weaves the traumas of her life into the fairytales and stories that form the basis of much of her work. In her etching Jack and Jill (1989), the latter comes sliding down a cliff face with the skirt between her legs dark with blood. She has also illustrated scenes from Jane Eyre, and the curators have tentatively drawn parallels between the protagonist’s turbulent love affair with Mr Rochester and Rego’s own relationship with her husband, Victor Willing. Nursery rhymes such as Three Blind Mice and Baa, Baa, Black Sheep get a distinctly gothic, Goya-esque treatment. The animals are larger than life and seem enchanted by some dark magic. A seated ram with a self-satisfied expression pulls a girl in towards him and the blind mice are transformed into giant dancing rats with human hands. 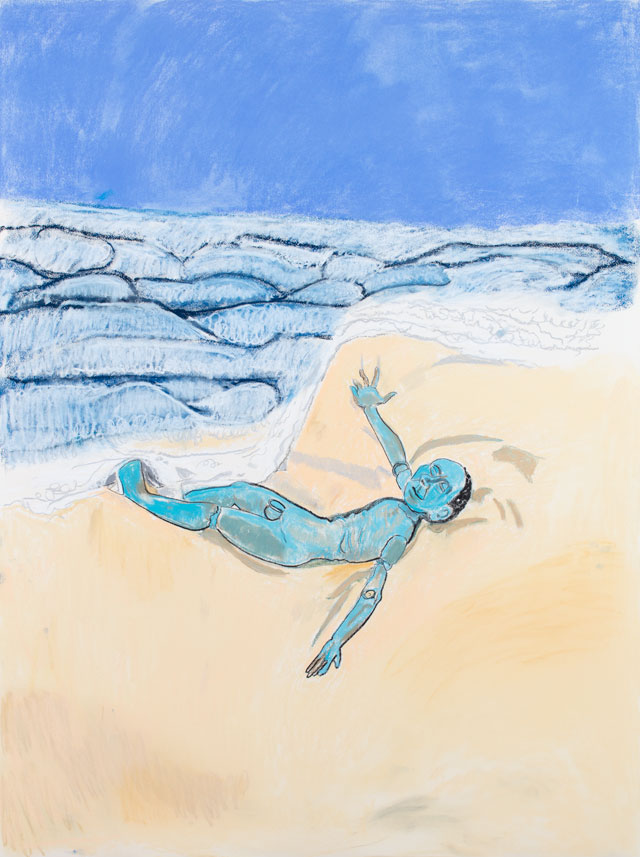 Paula Rego. The Sky Was Blue the Sea was Blue and the Boy Was Blue, 2017. Courtesy Marlborough Fine Art.

When turning her attentions to Peter Pan, JM Barrie’s female characters are Rego’s focus. In perhaps the most striking in this series, a muscular, middle-aged mermaid – based on the artist’s mother – tries to drown Wendy, pushing the spindly girl down into the dark sea. Nearby, more mermaids hang from the ceiling, but these nightmarish versions are toothless, winged creatures with snaking green tails and unseeing eyes. Rego uses such “dollies”, as she calls them, as models and there are a number of these ghoulish mannequins dotted around the gallery.

Drawing is at the heart of Rego’s work and this exhibition beautifully showcases the range of her skills. She can render figures that are monumental and solid, but also those that are feathery and frail, altering her visual language for affect. After a fall earlier this year, with her face badly bruised, she took up some crayons and sketched what she saw in the mirror. The result was a series of fractured images, in which she seems to almost revel in the battered reflection that greeted her. She tilts her head back, slackens her jaw, dresses in colours that match the red and purple marks on her face. This is how Rego processes her experiences. By drawing her pain, she seems able to guide herself through the traumas in her life and, by doing so, lays bare the experiences of so many others. That is precisely what good art should do. It should make you see the world differently. It should inspire and excite you. I can’t help but carry the after images of Rego’s stories with me as I step out of the gallery and into the cold sea air. And looking up, I wonder at the story of the fisherman who sits on the roof of the Dolphin Inn.