Entering the gallery, visitors enter a new world – a liminal space, with an empty lift, piss-stained walls, and a municipal blue hotel sign on a cracked concrete wall. The artist explains his interest in civic architecture as social sculpture and a site of social exchange

As the title of this immersive exhibition, Municipal, suggests, its artist, Paul Carter, is interested in ideas of communality and civic architecture, and it is filled with quasi-architectural sculptural installations. Building on the notion that his studio – and, indeed, the gallery space and all communal spaces around us – is a hotel, or a kind of social sculpture, in which people are invited to come together and connect in their isolation, his installations reference public buildings and often quite communist architecture, considering their functionality and dysfunctionality as places of social exchange.

Here, a lift stands centrally, opening and closing at timed intervals. Visitors may enter it, press the buttons, and wait to be transported to another place. Where or what this place might be like, only their imaginations can tell. They may, of course, also walk around the outside of this object, a view they would never normally have, opening up a liminal space, a place of division. Carter, who has claustrophobia and never uses a lift, enjoys watching people interact, or stand waiting for “residents” to appear. He describes his phobia as coming from “a sculptural sensibility of space”, and this sensibility resonates throughout his work. The “piss corners”, recreating abandoned walls of buildings where men give dysfunction a new use, line the left-hand-side of the main gallery space, inviting visitors in, while, perhaps, once they recognise the reference, repelling them at the same time.

A film plays in the background, showing a man destroying his down-filled padded jacket – feathers flying everywhere, a gesture of despair and isolation, almost soundless, “a crisis of materiality” as the subject seeks to understand his place within a municipal structure – a municipal society. An everyman, or a resident in the municipal hotel, who travels in the motionless lift, and pisses between stained yellow Plexiglas frames. 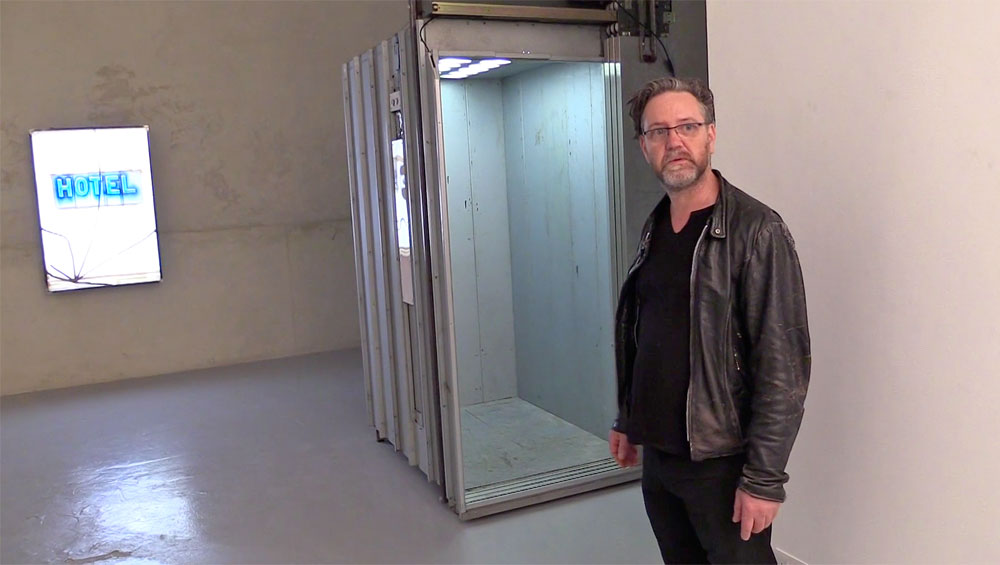